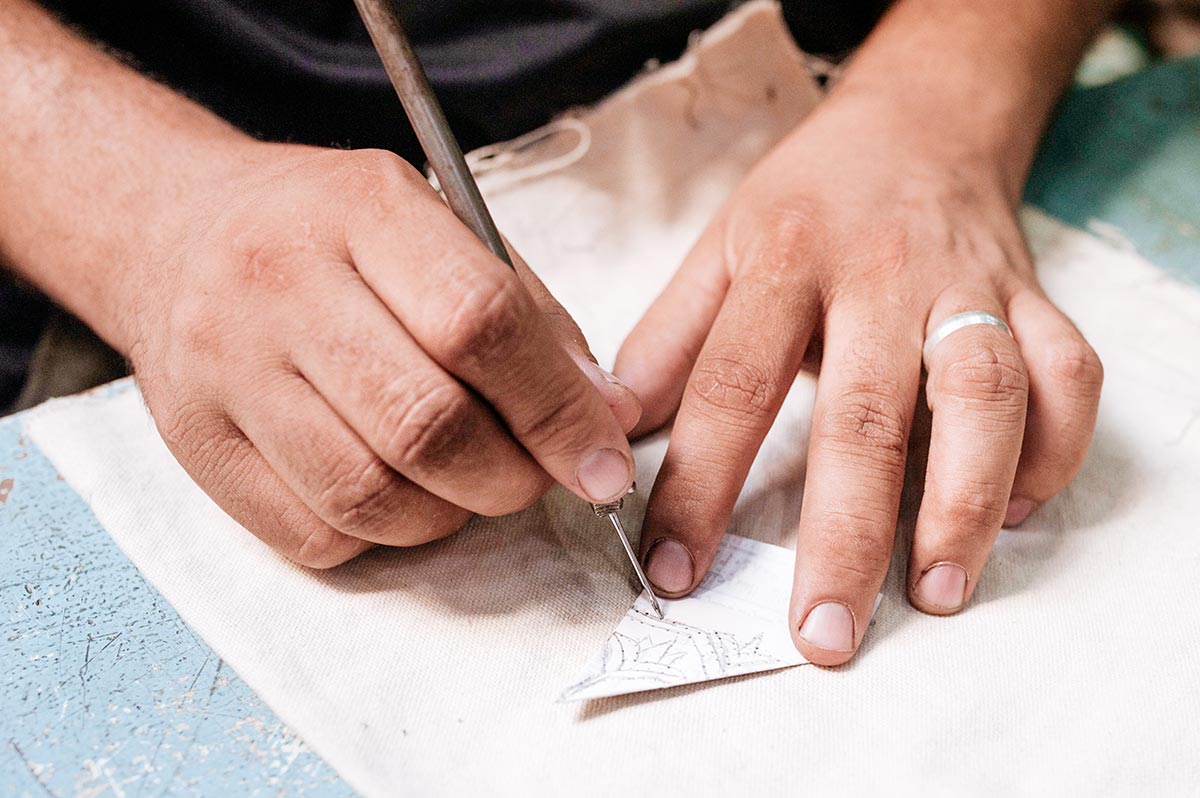 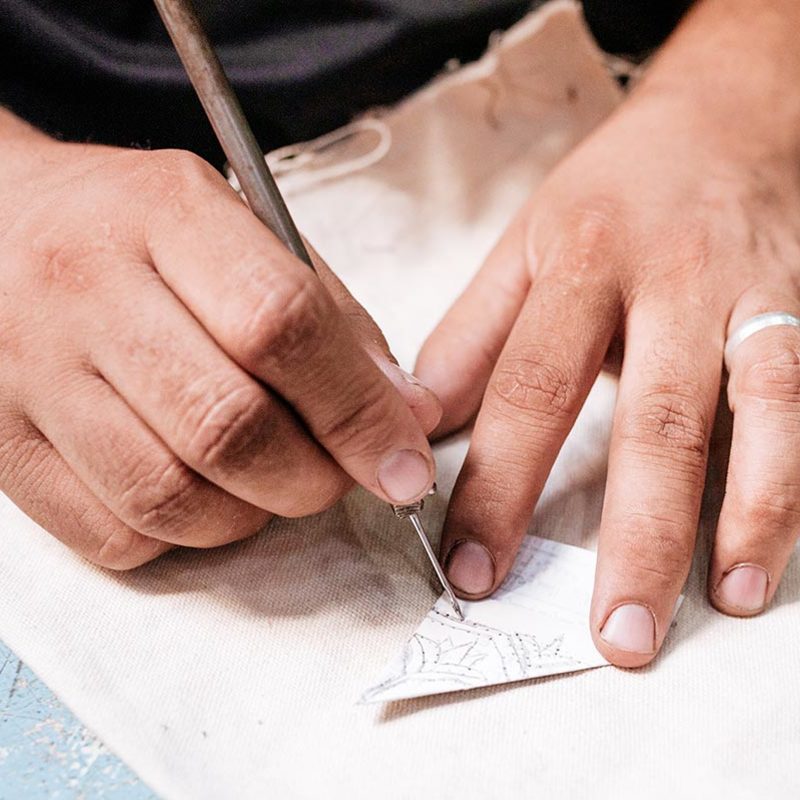 Through centuries, the artisans of Al-Khayamiya in Islamic Cairo have continued to develop their trade, without giving up its traditions.

Just after passing through Bab Zuweila, one of the last remaining gates of Old Cairo, as the grand citadel appears in the distance, there’s a narrow street with a high roof. Dust dances in the light coming in from small holes in the roof, and as your eyes slowly adjust to the dusk, the Nirst thing they see is colour everywhere. This is Al-Khayamiya, the open-air market and workshop of Cairo’s artisan tentmakers. 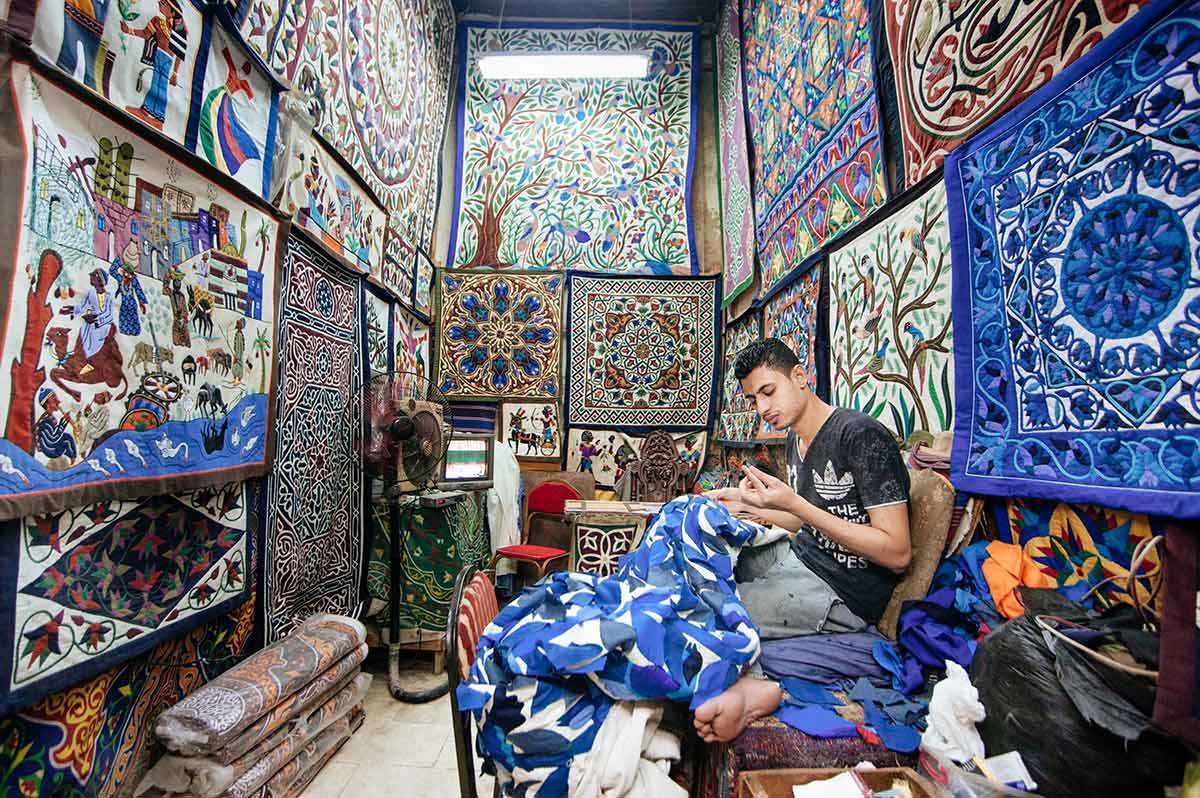 Shop fronts on both sides of the street are adorned with elaborate wall hangings, bedspreads and pillow covers – every piece in its own unique design, with intricate patterns and colours. There is a tree full with chatting birds, its leaves and branches intersecting with the birds to create a harmonious mosaic; next to it a hypnotising geometrical pattern, pulling your attention to its centre.

Inside one of the shops, at the end of the roofed street, sits Ahmed Rabia, cross- legged and hunched over a piece of fabric. He treads his needle gently, begins sowing a green patch onto the fabric. Slowly, it forms the shape of a leaf. The needle dives in and out, often quicker than the eye can keep track of. 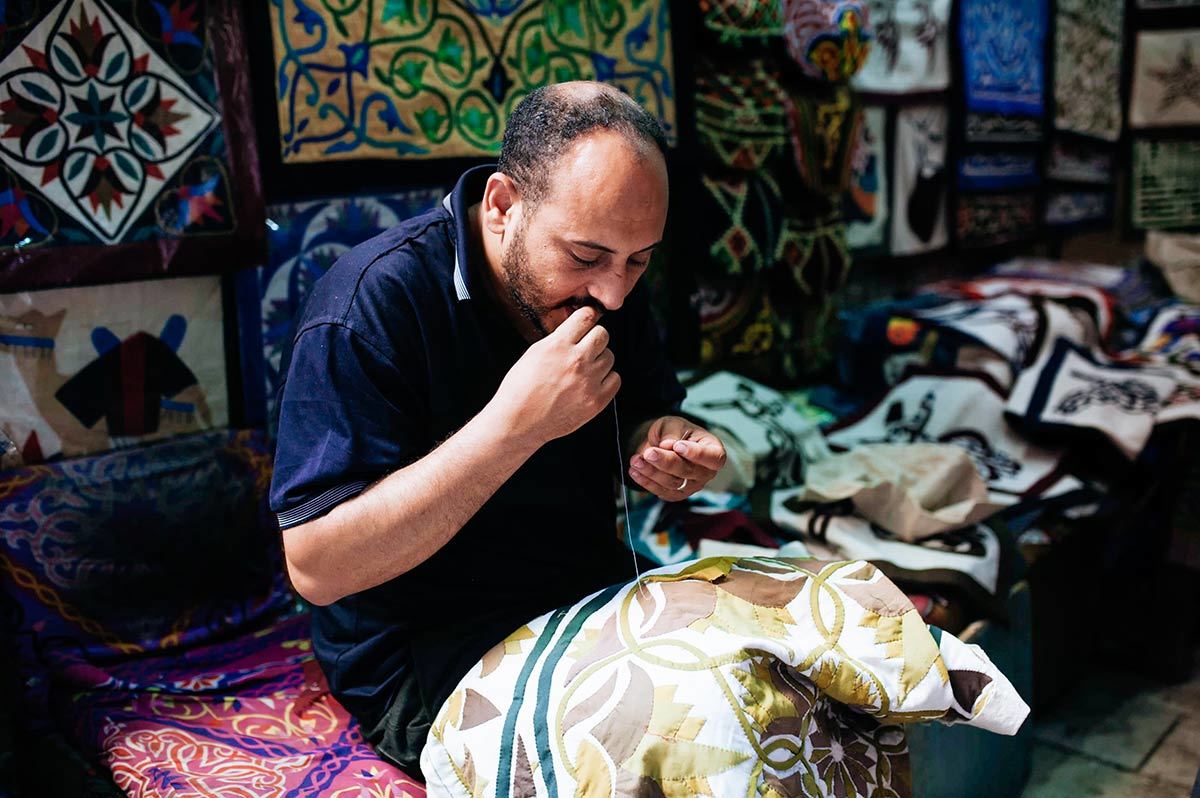 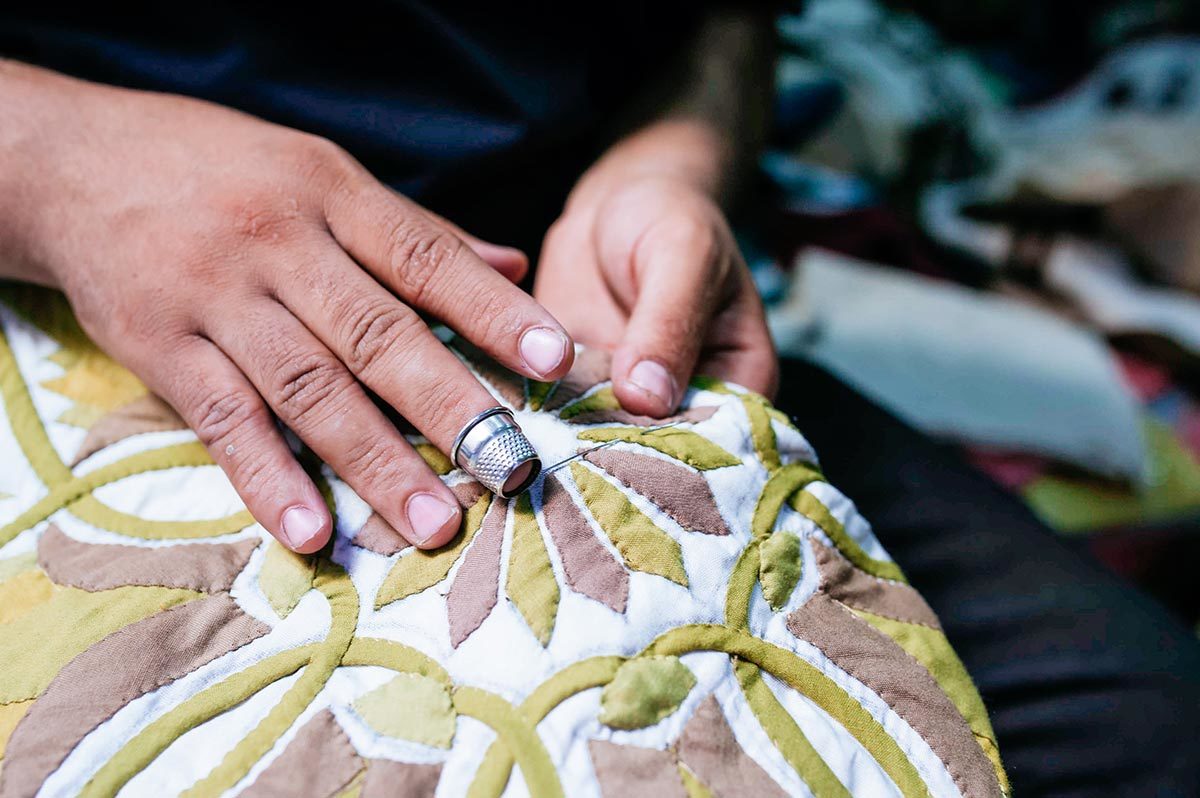 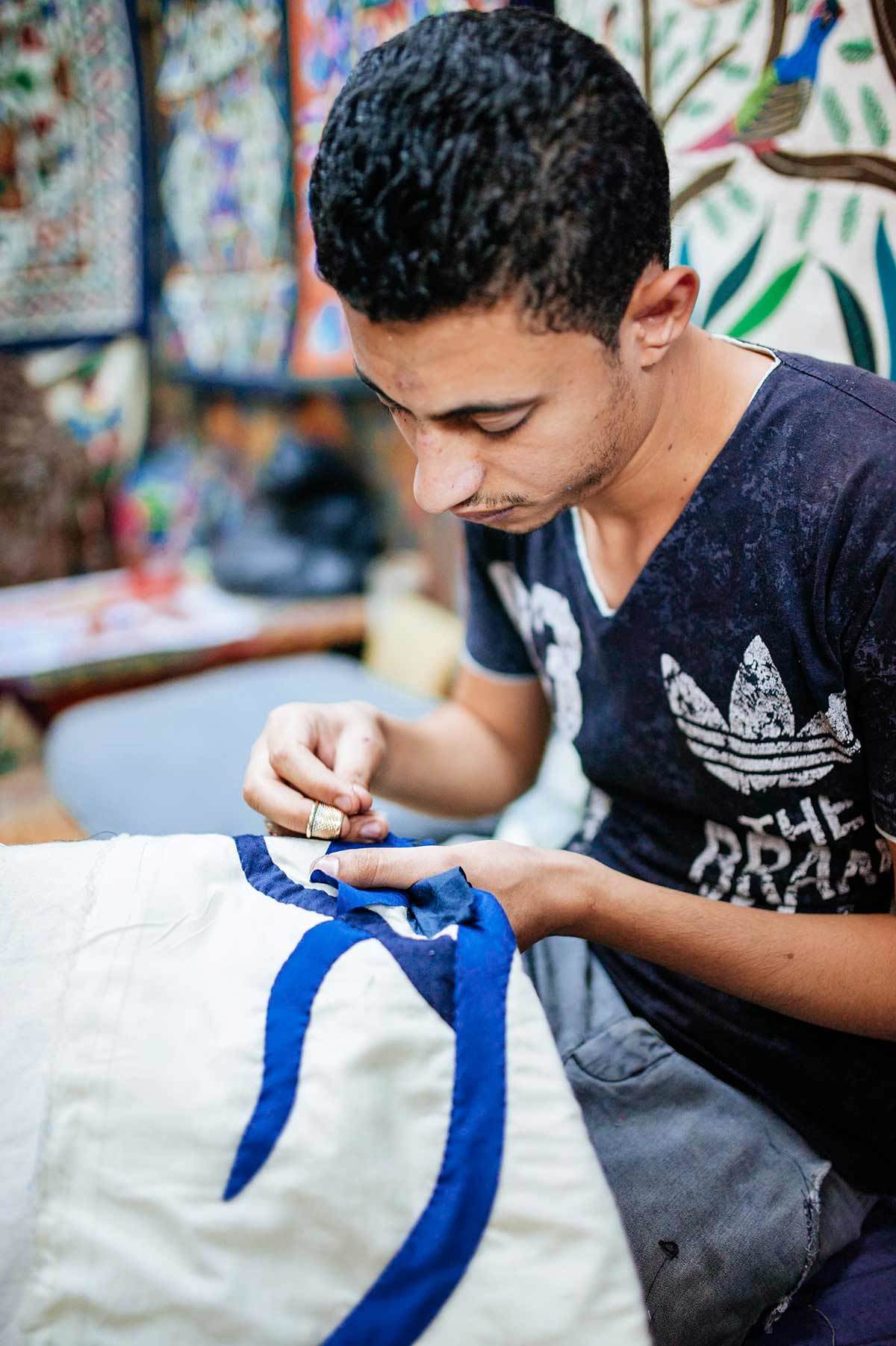 Left top: Ahmed Rabia treads the needle to continue his work on a new pillowcase
Left bottom: The tentmakers use three tools: a needle, a thimble and a pair of scissors
Right: A tentmaker from the new generation of craftspeople in Al-Khayamiya

Rabia is a ‘khayami’, a tentmaker – sitting in the same street, in the same position and using the same techniques as the tentmakers of Cairo in the Middle Ages. Generation after generation, their craft has been passed on; adapting to the changing needs of its customers, at the same time preserving and developing the skills into a form of art. Today, these tentmakers are known over the world for their acute attention to detail.

‘It’s not just a job. It must also be your hobby. Something you enjoy,’ says Rabia.

Unlike most other craftspeople in the street, Rabia is not the son of a tentmaker. He learned the craft from his uncle, but only because the seven-year-old Rabia was mesmerised by what the tentmakers were able to produce, using only thread and cotton. He is 44 years old now, but when talking about the craft, there is still a glimpse of that boyish enthusiasm.

‘I won’t make my kids go into this trade if they don’t want to themselves,’ he says. ‘If they don’t love it, they won’t produce something of value and will never succeed.’

In the days of travelling with caravans, when tradesmen from the east and west would come to Cairo to do business, many would stay just outside Bab Zuweila. While they were resting or doing their transactions, tentmakers would repair their tents or produce new ones – once the tradesmen moved on, they would do so with a complete, moveable house, fit to withstand the harshest of desert climates. 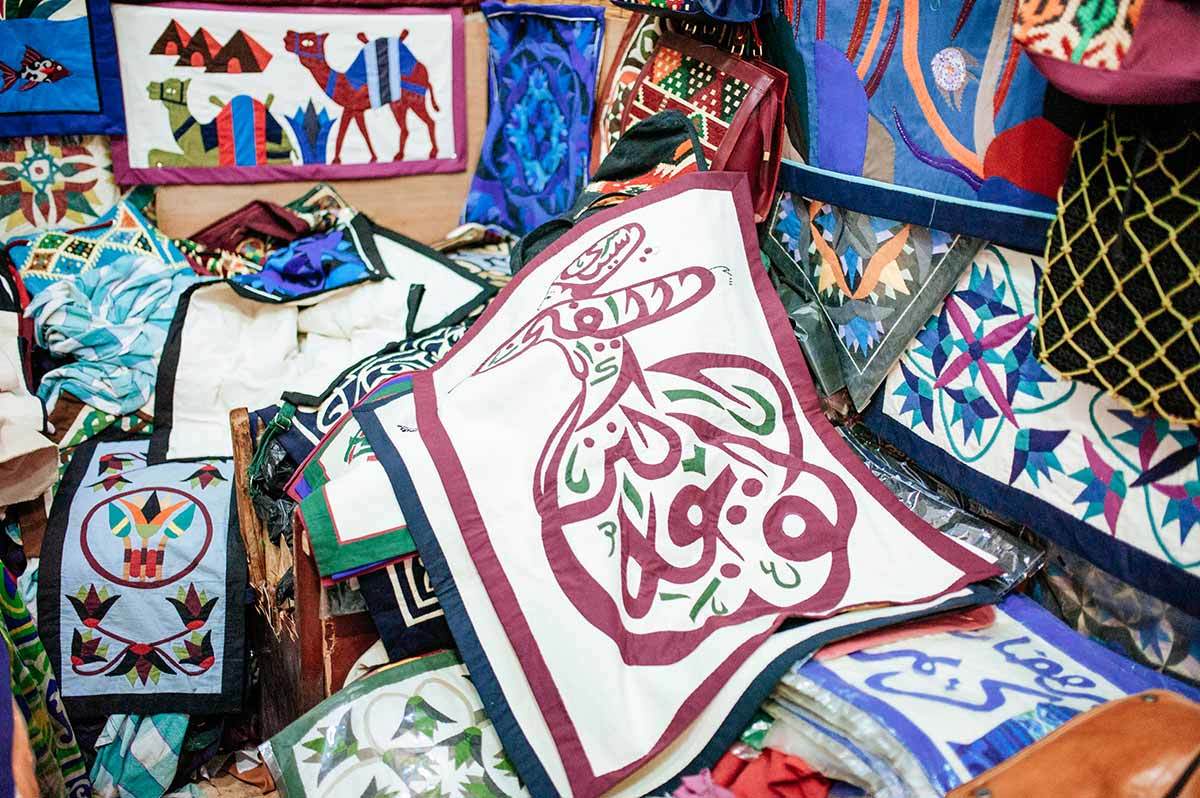 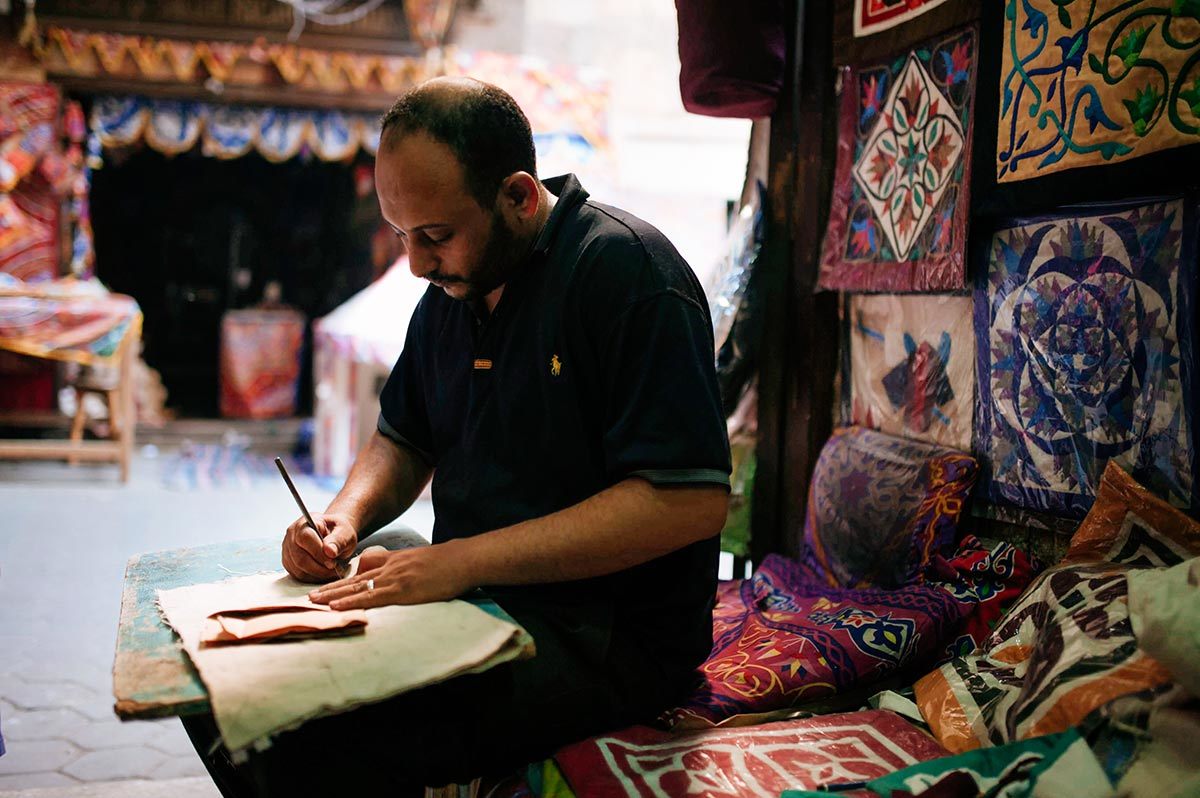 Top: Rabia has specialised in using calligraphy for his designs
Bottom: Rabia in his workshop, which is also his store, displaying the craft

When times changed and the need for textile living quarters diminished, Cairo’s needle-men began making ornamented tents for weddings and funerals instead, or religious events like Ramadan and moulid festivals, or the homecomings of pilgrims.

For this, they had to make big, rectangular panels – many metres wide – which they decorated with arabesque patterns taken from Islamic geometry. Such pavilions are still in use, but the market today is dominated by cheaply printed replica fabrics, and tentmakers are rarely commissioned to make these tents any more.

In the late 19th century however, a new demand arose. Foreigners coming to Egypt were intrigued by the tentmakers’ craft, and so began requesting products that could be used as indoors decorations. That is how an orientalist passion for all things exotic happened to spur a significant evolution in the work of Al- Khayamiya’s artisans. Pillowcases, bed covers and wall hangings now became the most sought after items, and the craftspeople began working with folkloric and Pharaonic imagery, to appease their new customers.

But this development did not lead to a complete abandonment of their original designs, nor did it result in the kind of kitschy tourist products that dominate the nearby bazaar, Khan al-Khalili. The process has been more one of skillful adaption, in which the tentmakers have not just copied off the walls of Egypt’s Pharaonic tombs, but rather sketched their own unique designs, utilising traditional techniques.

‘What you find here is unlike anything you find anywhere else. It’s only us tentmakers sitting in this little street that know how to do it,’ says Rabia.

He has also studied calligraphy, which he incorporates into his work – there’s a wall hanging portraying a Sufi dancer, entirely composed from calligraphy; the words forming a Quranic quote also outlines the shape of a whirling darwish. 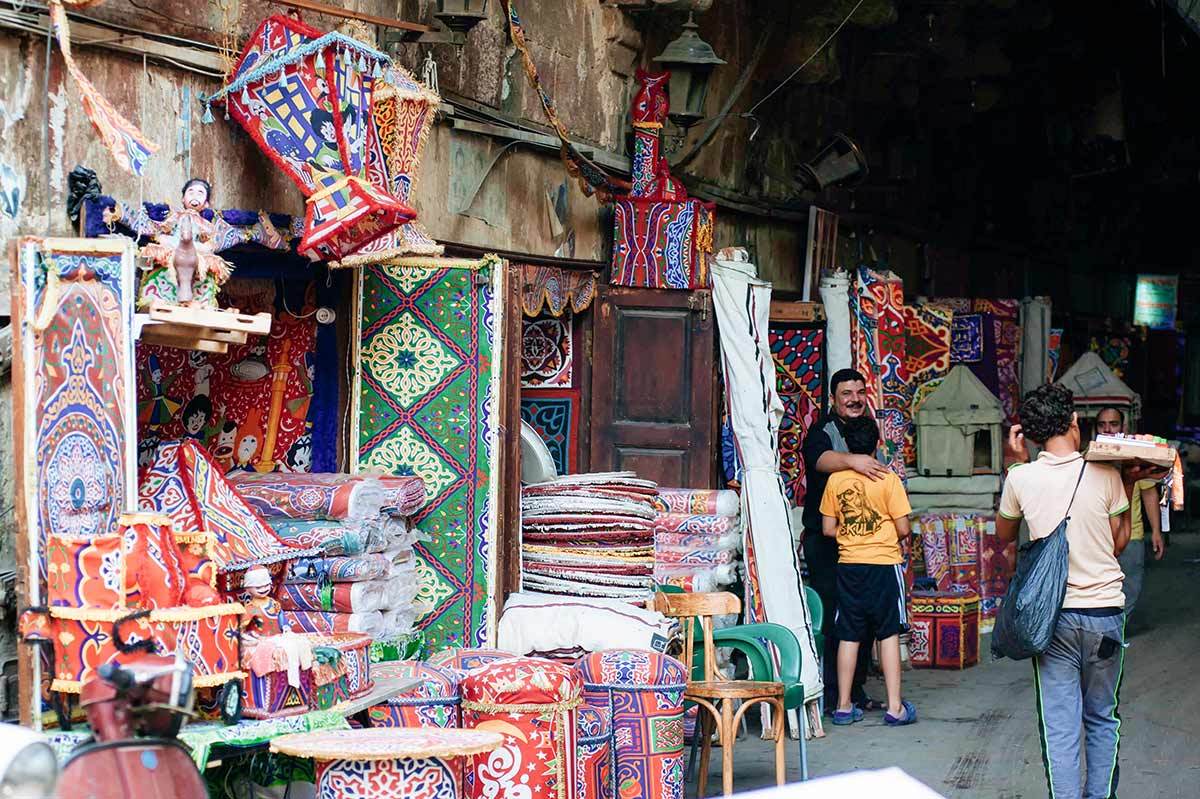 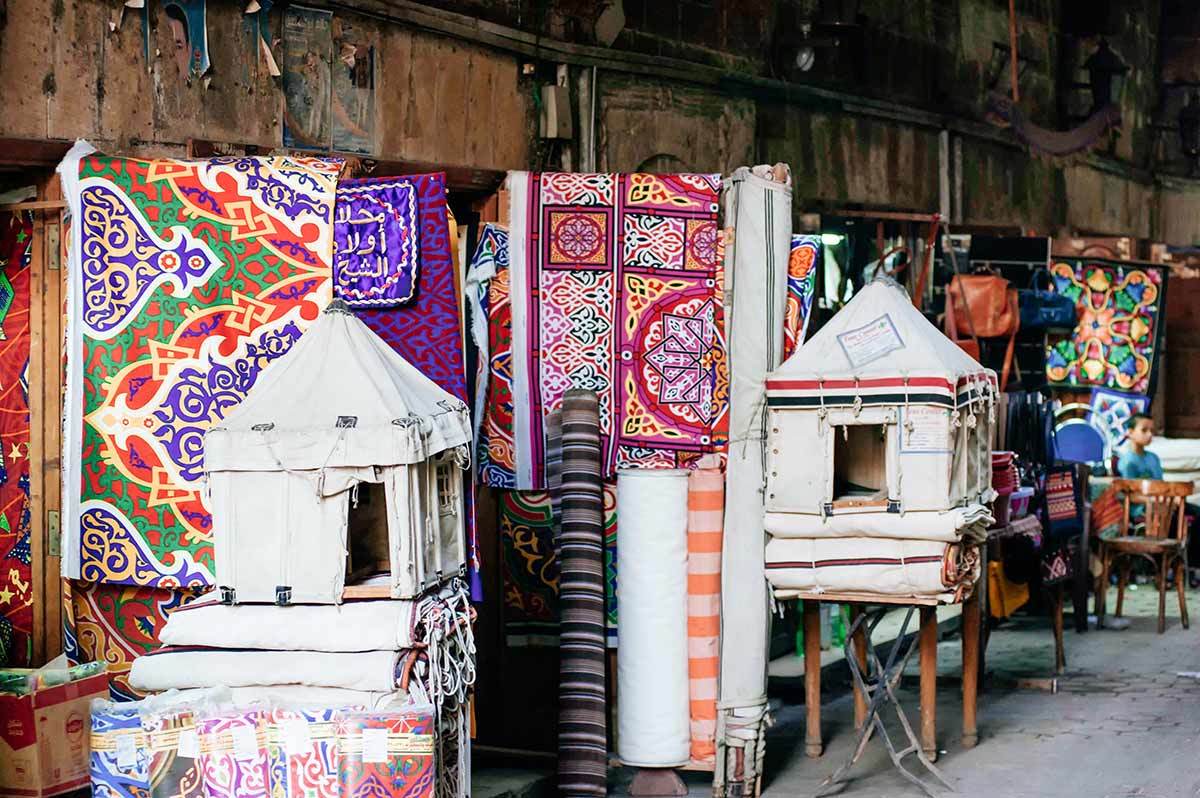 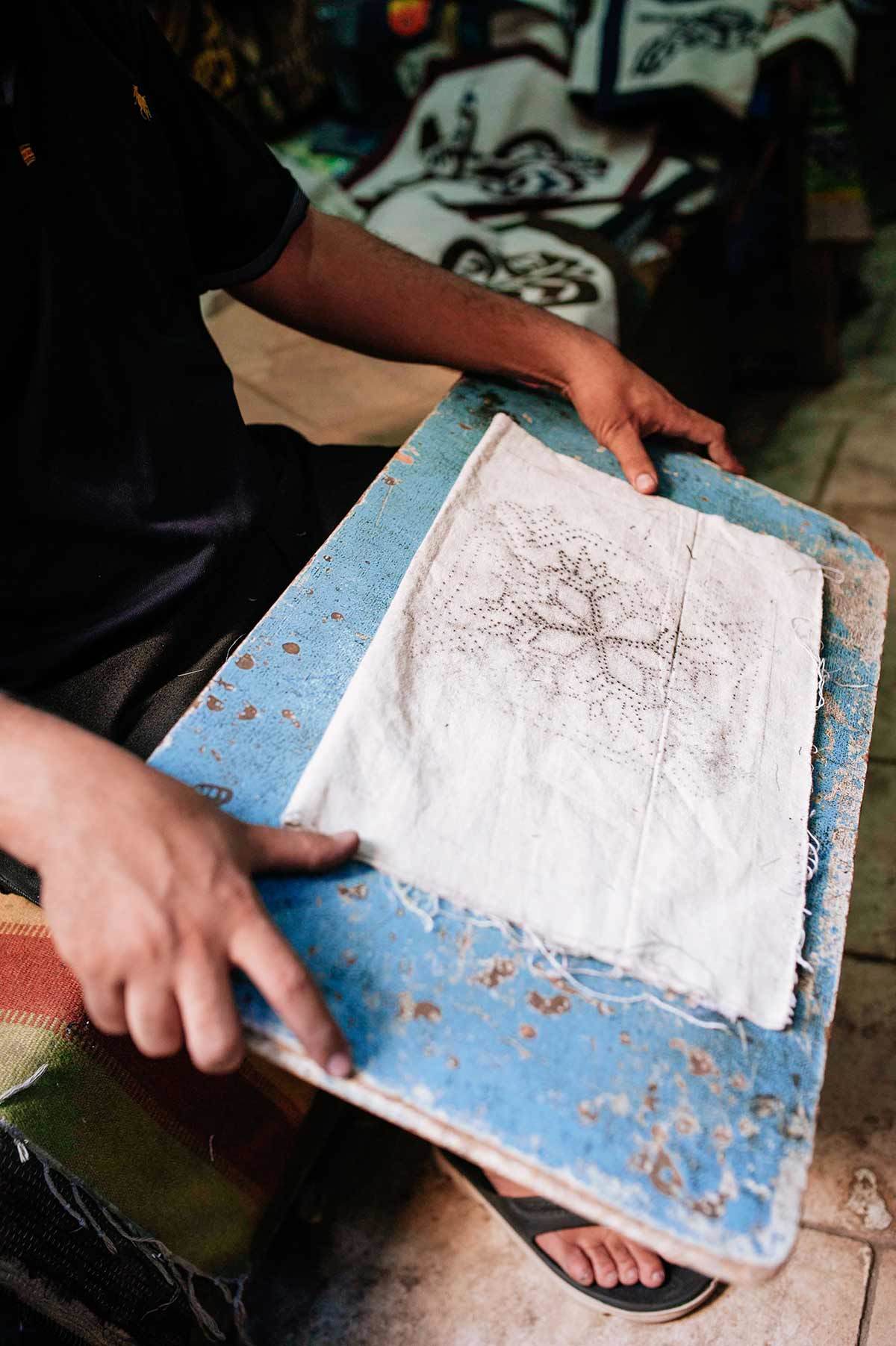 Left top: Al-Khayamiya used to be stables for caravan horses arriving in Cairo
Left bottom: Some tentmakers still know how to make tents, but they are rarely asked to do this any more
Right: Through piercing holes in the sketch, the tentmaker imprints the design on the fabric

When making a typical khayamiya applique, the tentmaker begins by drawing the idea onto a piece of paper. Once satisfied with the sketch, he takes a needle or sharp tool to punch holes along its lines, then places it on top of the cotton fabric that will serve as the background for his design. He rubs it with a cloth dipped in either soot or a bright powder, depending on whether the fabric is light or dark, letting small dots outline the pattern. Then, using a pencil he connects the dots, making a perfect copy on the fabric. The tentmakers call this ‘the stamp’.

After that begins hours and hours of work with the needle to attach, with care, decorations to the background. Each tentmaker keeps a large assortment of fabrics in his workshop, in various colours and shapes; but rather than cutting them into precise sizes, he folds the patches to fit the outlined pattern, and stiches them onto the fabric. 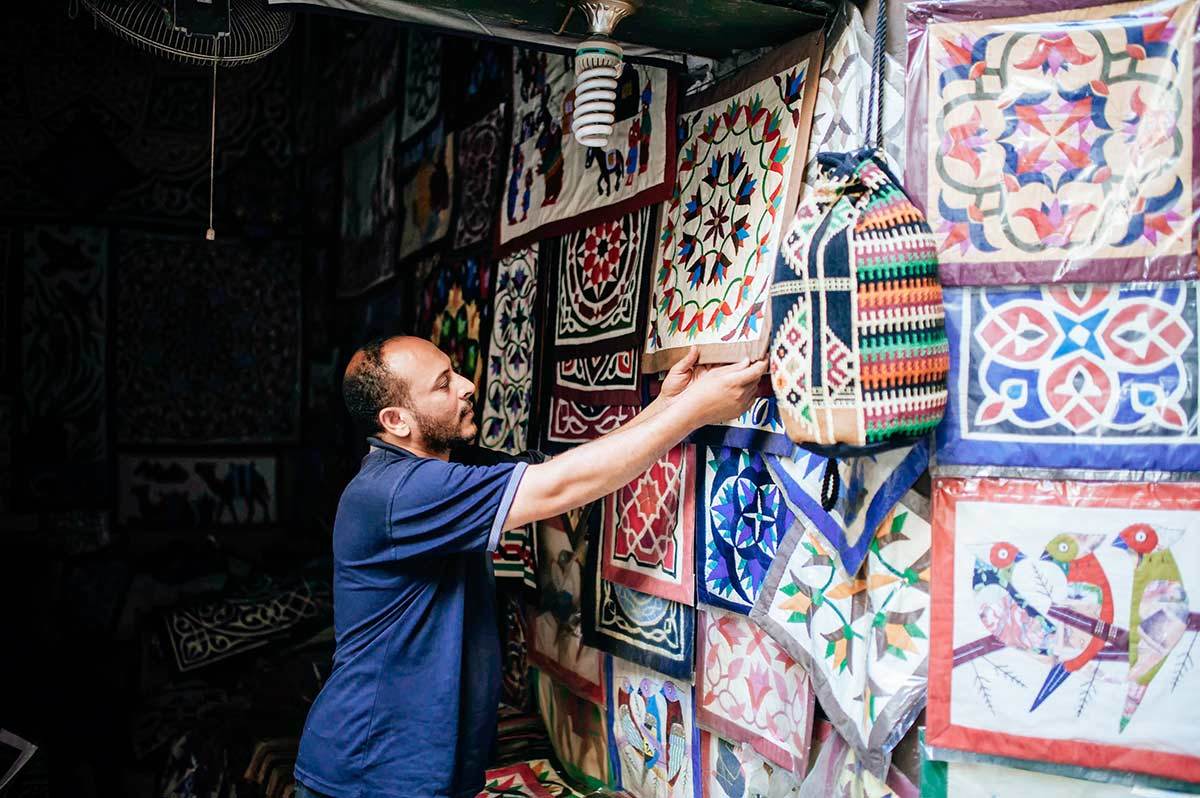 Ahmed Rabia puts up products for display in his shop

On large patchwork pieces, the same procedure is repeated hundreds of times, leaving the patches in colourful harmony. These may take up to a month to complete – and at no point will the tentmaker use a sewing machine or any other sort of mechanics. All that is needed is a needle, a thimble and a large pair of scissors.

‘This work requires a precision that can only be produced by a human hand,’ says Rabia, treading another needle while hardly looking at it.