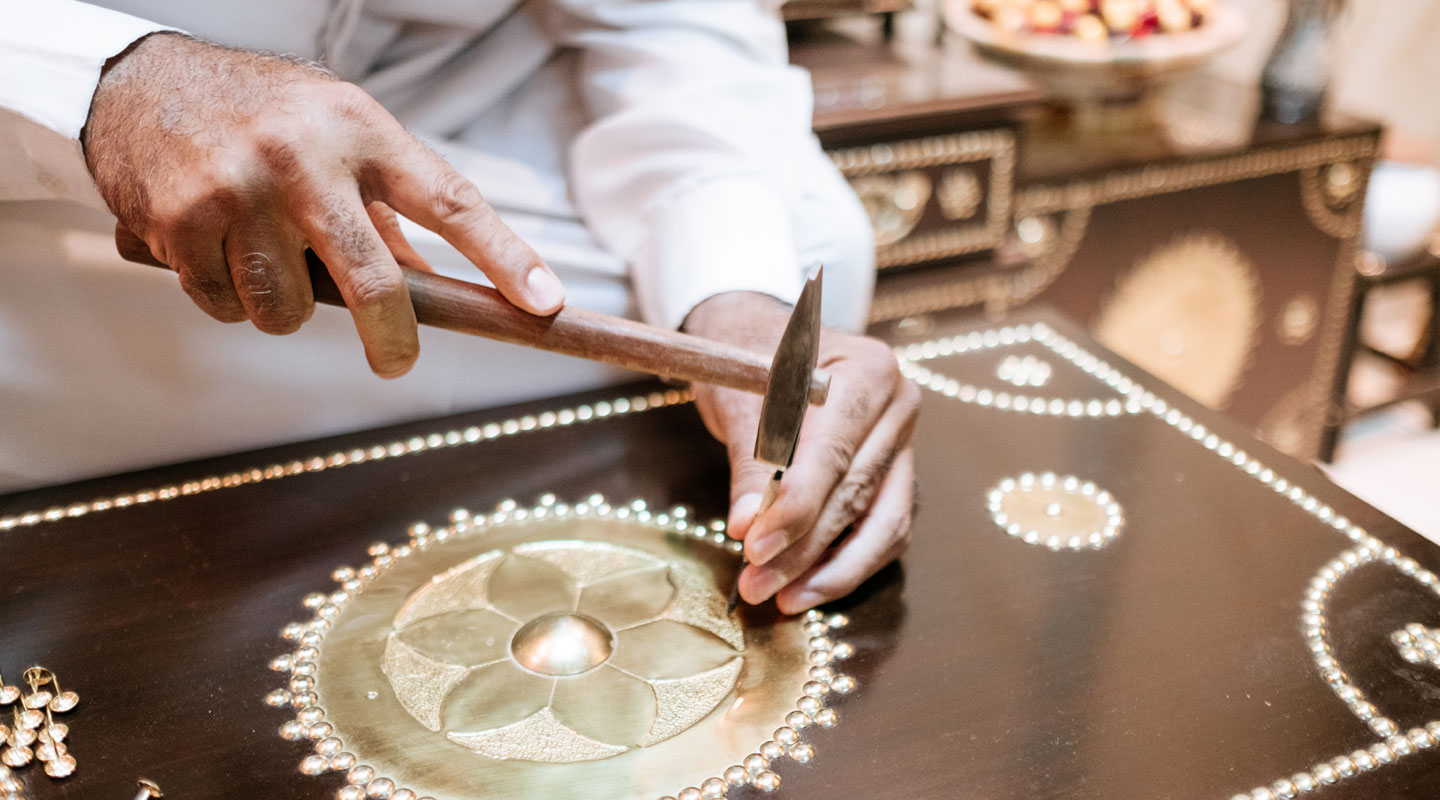 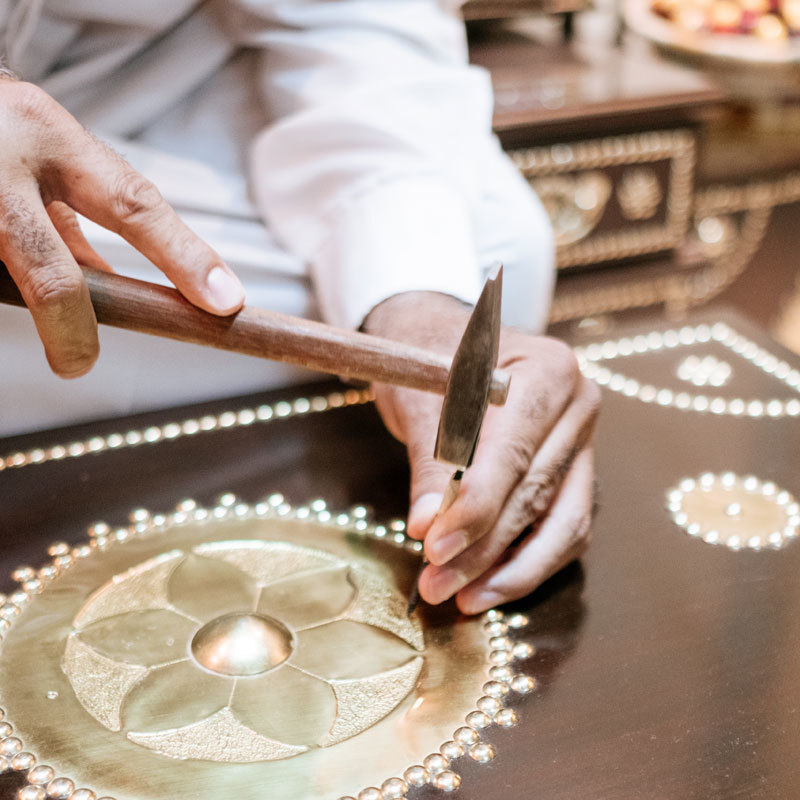 In his home in Madinat Hamad, Ali Mattar sits surrounded by wooden chests in varying sizes, each one embellished in its own style. One after the other, he meticulously hammers copper nails into one of the chests. The hammering sound signifies Mattar’s work – reviving a heritage that dates back centuries.

The craft of designing and decorating traditional Bahraini chests, sanadeeg mubayata, is one that requires precision and patience. Mattar beats the intricately designed nails down with care, to create patterns.

‘Our work is inspired by Bahraini heritage. For years, I used to photograph unique cultural sites and then recreate them in my work. This flower is one that was traditionally sewn on women’s jalabiyat, national dresses,’ explains Mattar, pointing to the centre of one of his sanadeeg.‘Other craftsmen draw their inspiration from Indian traditions and their designs are similar to those found in henna.' 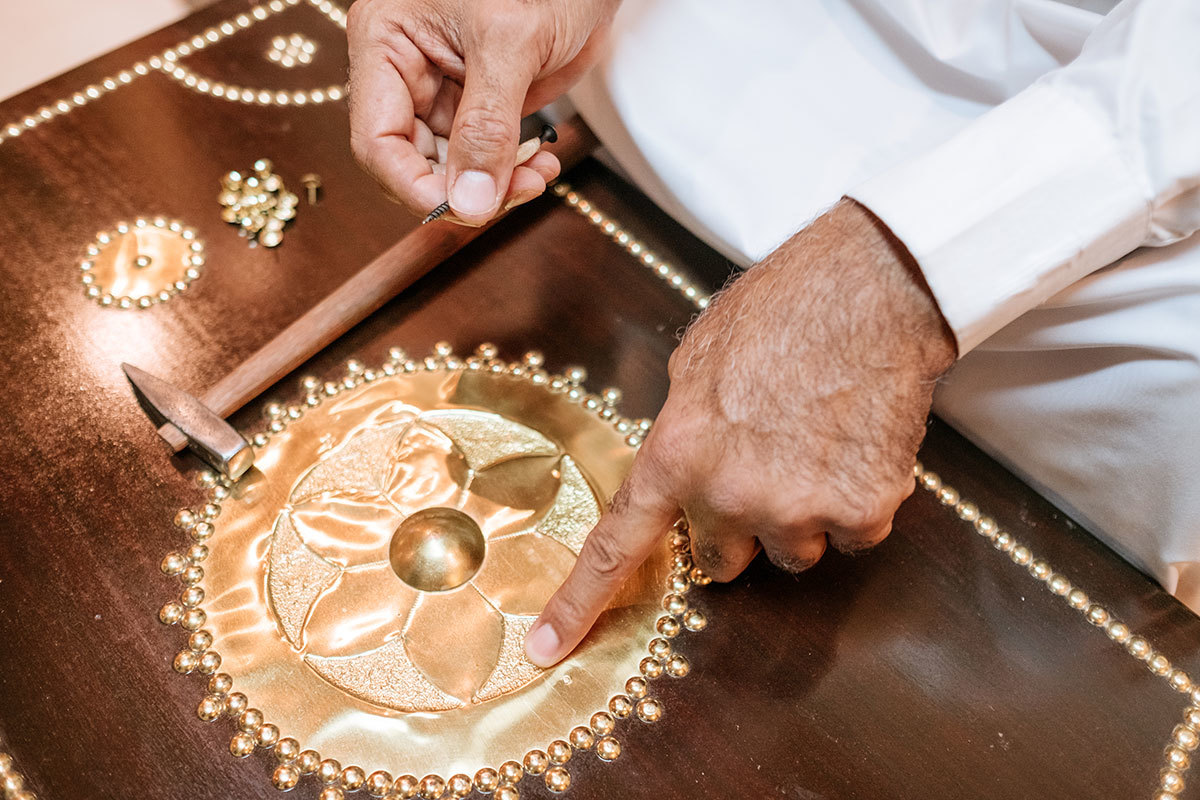 Deliberate hammering creates a deeper engraving in the copper

The term sanadeeg literally translates to chests or boxes used for storage. The root of the Arabic word mubayata is bata, which refers to the keeping of an object overnight. Traditionally, the clothes and jewellery gifted to the bride by the groom were placed in the chest overnight, then transported to her new home the following day, marking the start of a new chapter in her life. The larger and more lavish the box, the higher the status it signified.

Nowadays, large sanadeeg are used for decorative purposes or the storage of everyday objects, whereas smaller ones are still used to present the dowry to the bride. Historically, divers also used the chests to store pearls collected at sea.

Mattar has worked in the industry for over 30 years. The start of his career in handicrafts began with the creation of wooden sailboat models. Initiatives by the Bahrain National Museum to enhance Bahrain’s tourism sector later led him to the doors of a talented craftsman, who taught Mattar the art of decorating traditional chests. What once took him 10 days to complete now requires a mere one to two days. 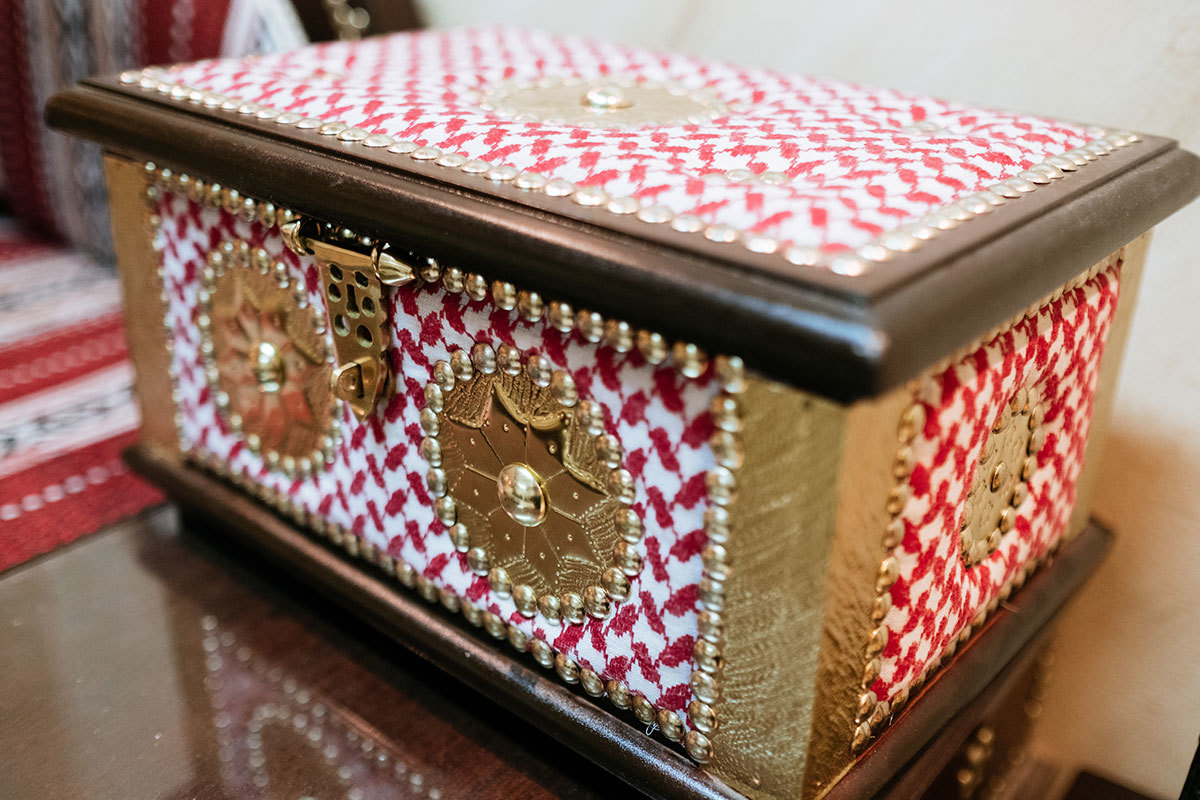 To adapt to evolving tastes of clients, a chest is embellished with a ghutra, the fabric traditionally worn by men around their heads

‘This skill requires artistic talent. One has to be an artist before becoming a craftsman,’ he says. ‘If the talent is coupled with dedication and commitment, then the craft can be learned within three to six months.'

Mattar leans forward in front of the chest, hammer in one hand and a nail in the other, and begins to engrave the copper sheet that has just been secured to its top. A gentle push with the tool creates a soft texture. The more deliberate the hammering, the deeper the engraving.

‘Machines can be used to prepare the designs, but working on it myself allows me to create more intricate patterns. The key is to be deliberate and careful. Any mistake and the entire sheet will need to be replaced.'

Working by hand allows Mattar to customise each piece and infuse it with details from decades of Bahraini heritage, rendering each chest unique and personal. 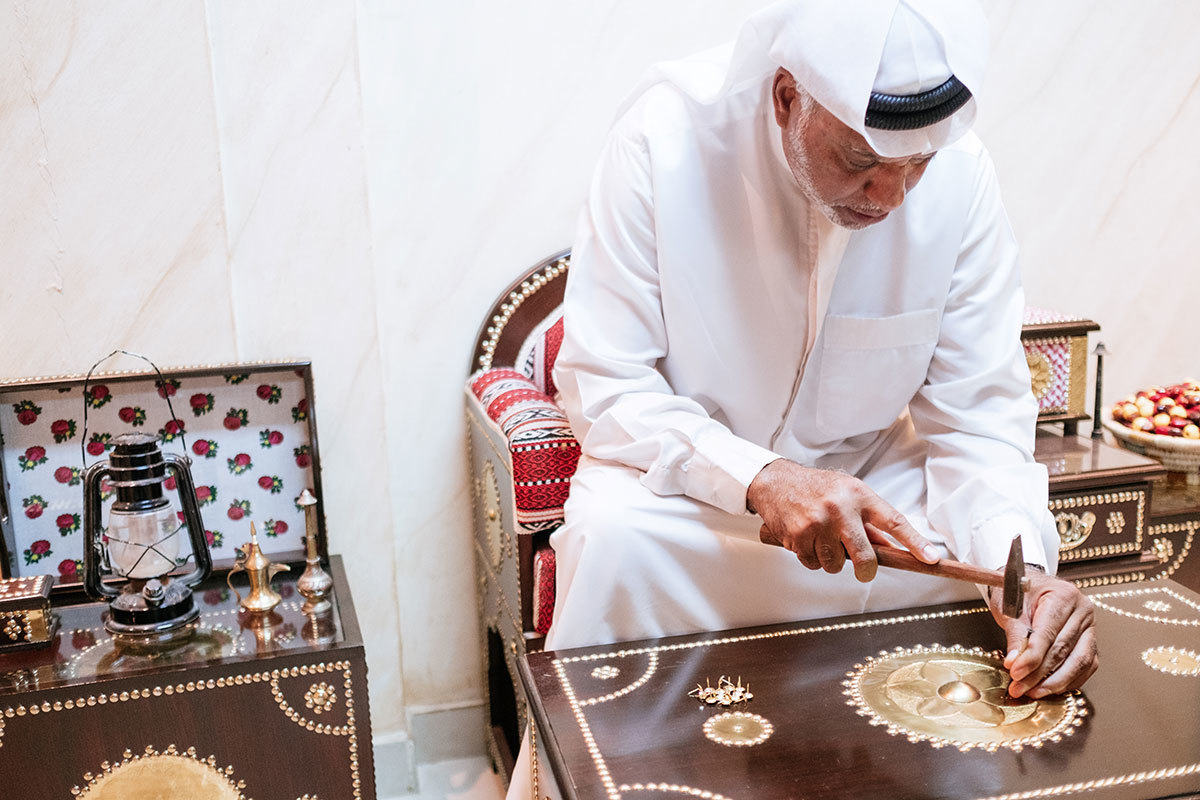 The copper used for engraving comes in large flat sheets. An average chest that weighs 15 kilos requires around two metres. Designs are either drawn directly on the sheets or outlined by samples, which are then cut out and lightly glued to the chest. The nails are then hammered around the design to ensure that it is secured. Upon completion, they are glazed with a material that prevents them from rusting.

Saj wood, sourced from India, is of the highest quality and most expensive to work with. Second in line is Meranti wood, also coming from India and commonly used in the Middle East. The most commercial of all – and the least expensive, almost half the price of the others – is the MDF (medium-density fibreboard) wood, which is found in Malaysia. 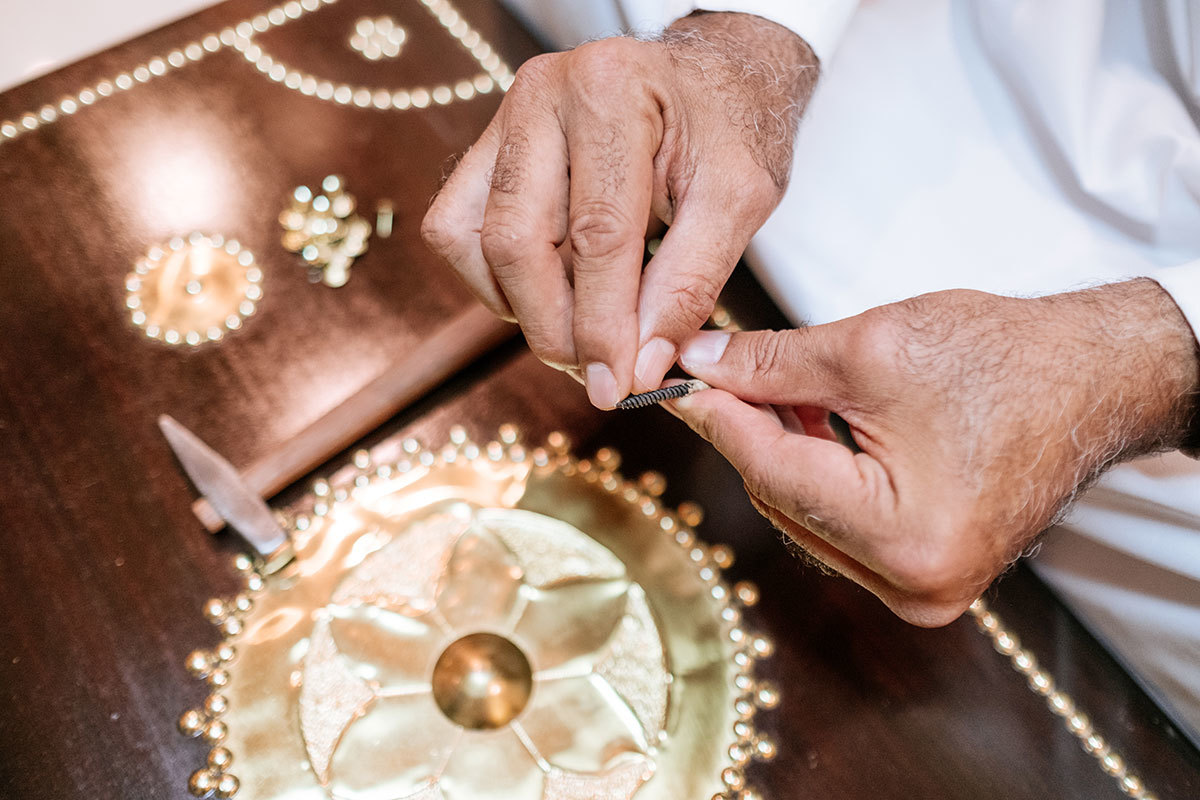 To create detailed designs, a nail is used for engraving

Although the art of decorating sanadeeg aims to stay authentic and true to the Bahraini culture, the evolving tastes of clients means that the work has had to develop as well. Some chests are now embellished with red and green fabric, traditionally used in a bride’s henna celebration. Mattar has also ventured into the art of decorating tables, merging function with heritage. The accompanying chairs are designed as traditional Bahraini doors, with nails hammered along the sides as one would find on a chest. Other products that have been adorned with the same style include trays and mabakher, traditional incense burners.

Currently, there are many talented craftsmen in Bahrain working in this profession. Last year, when participating in a competition between Arab and foreign countries in Riyadh, 17 Bahraini craftsmen were awarded ‘best display’; the year before in Abu Dhabi, they were allocated second place.

‘It’s unfortunate, but the younger generation doesn’t have the desire to learn the craft. Al Jasra Handicrafts Centre has been organising workshops to encourage them to master the skill. Unless a major initiative is undertaken, the craft will die with us,' says Mattar. 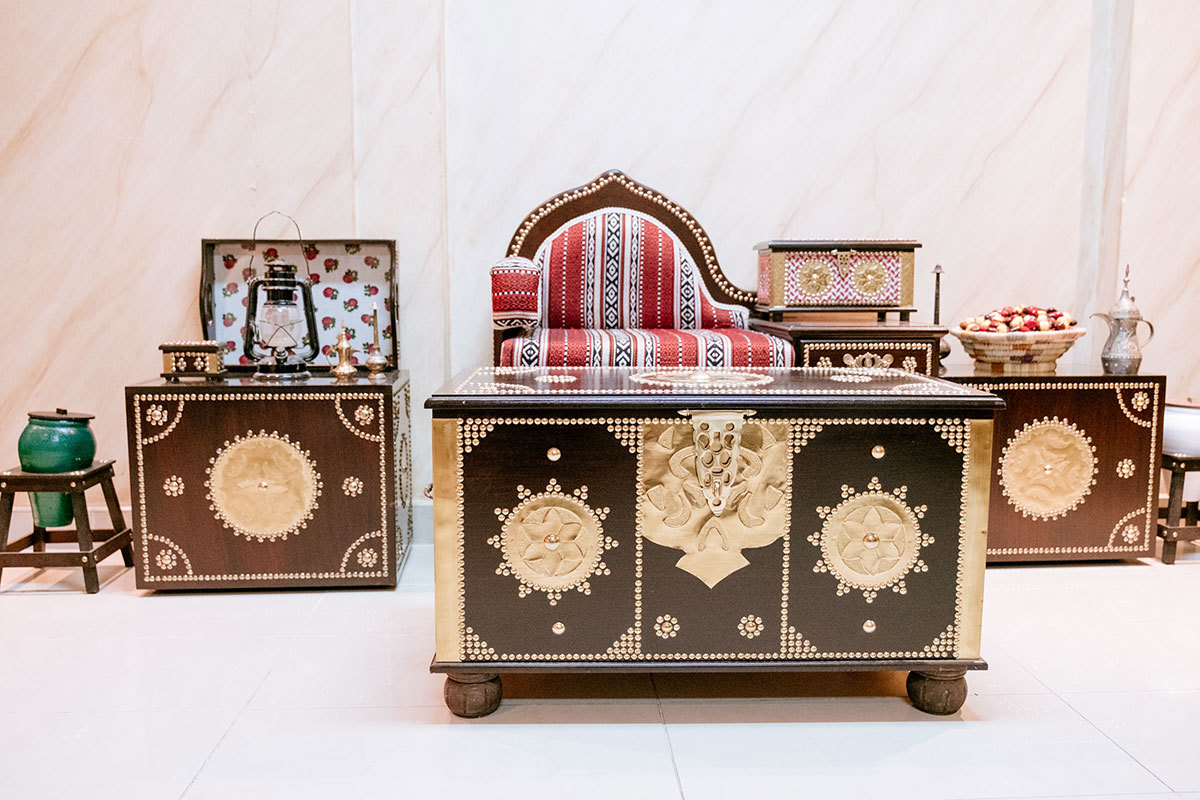 Chests of varying sizes fill the home of Ali Mattar 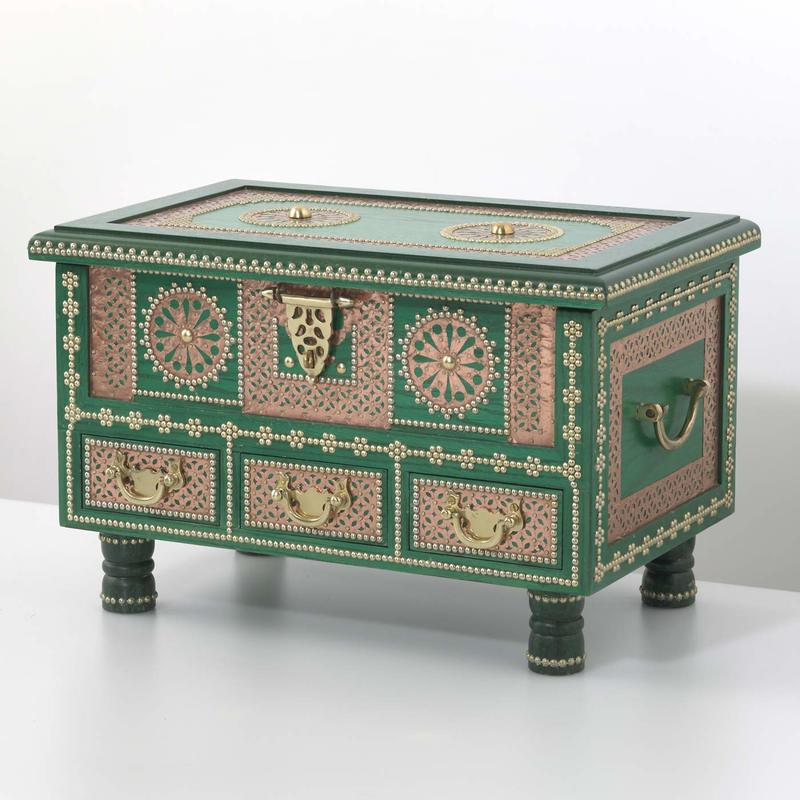