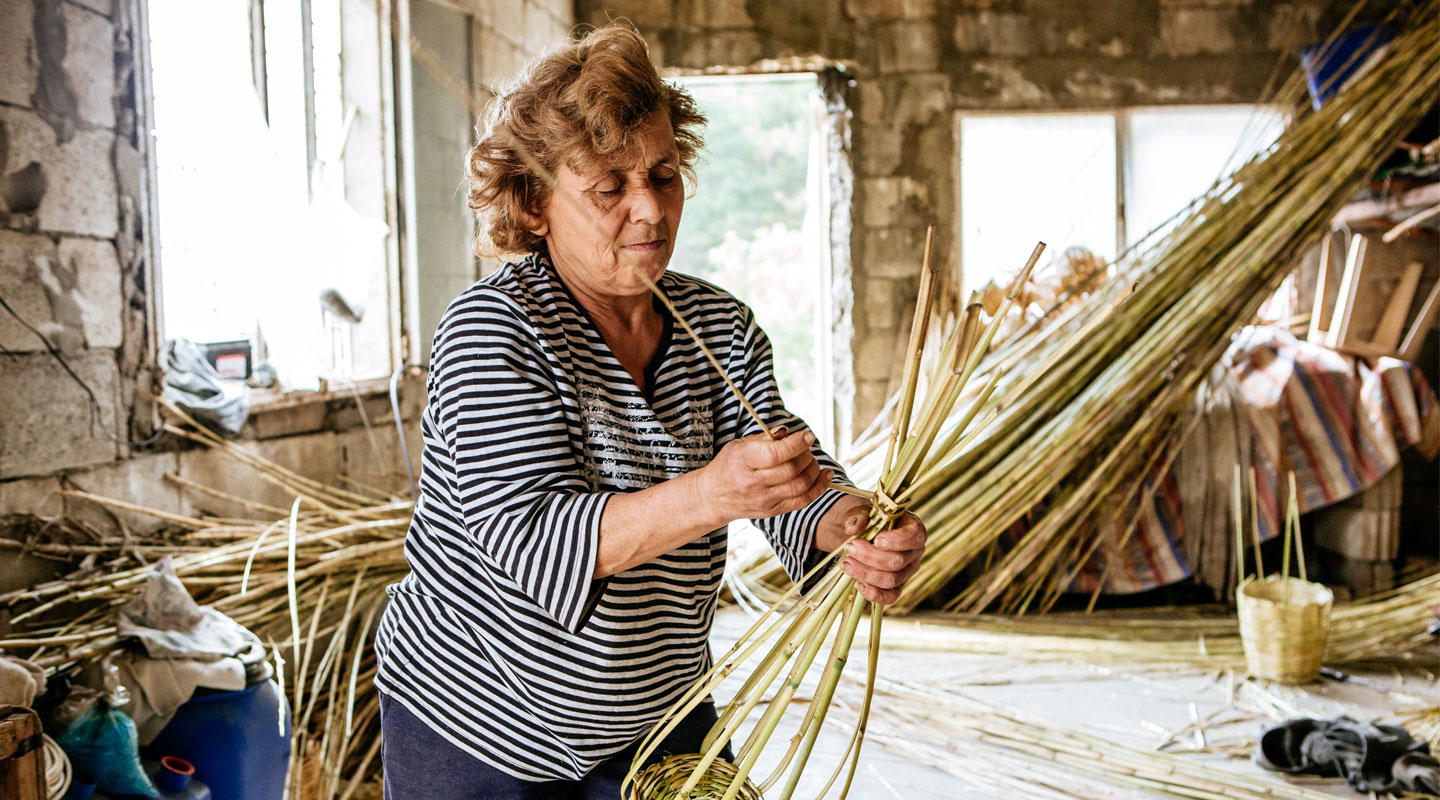 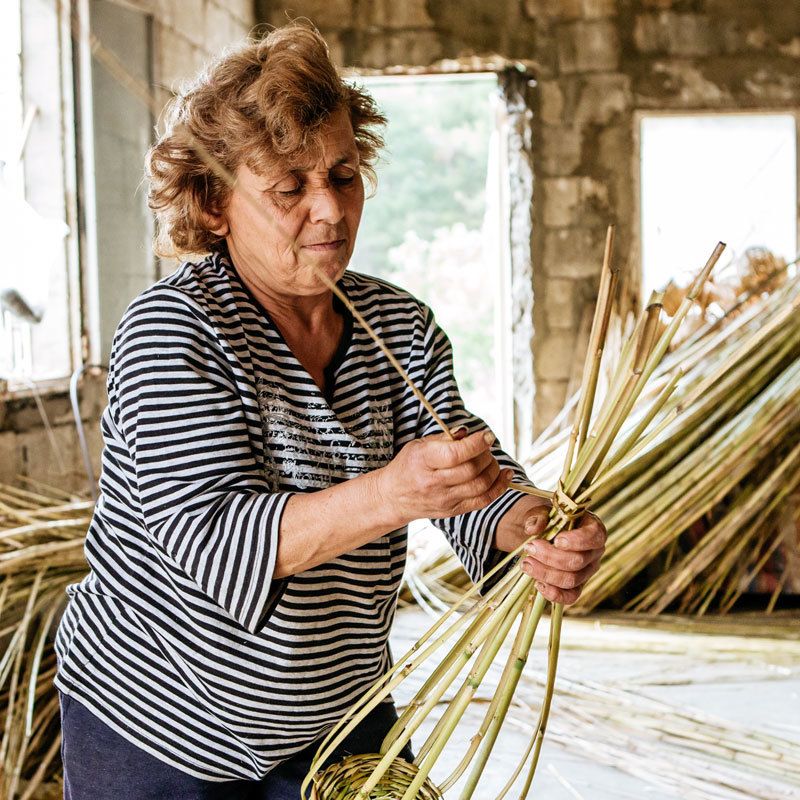 The sleepy town of Sereel sits at about 800 metres above sea level in the northern Lebanese mountains of Zgharta, surrounded by lush pine forests and fresh water springs. Just near the end of the main road leading through town is a small brick and concrete building, overlooking the surrounding foothills and greenery. This is the Mansour workshop, run by one of a handful of artisan families maintaining the craft of weaving baskets and other things from bamboo.

Bundles of bamboo reeds rest against the walls of the house or, nonchalantly, against the trees and cliffs outside, giving the passer-by an indication of the family’s trade. Soaad Mansour, the matriarch and most senior craftsperson of the family, sits on a wooden stool inside.

‘We have been doing this for generations. After my husband Youssef passed away several years ago, I had to take on the family business,’ she says. 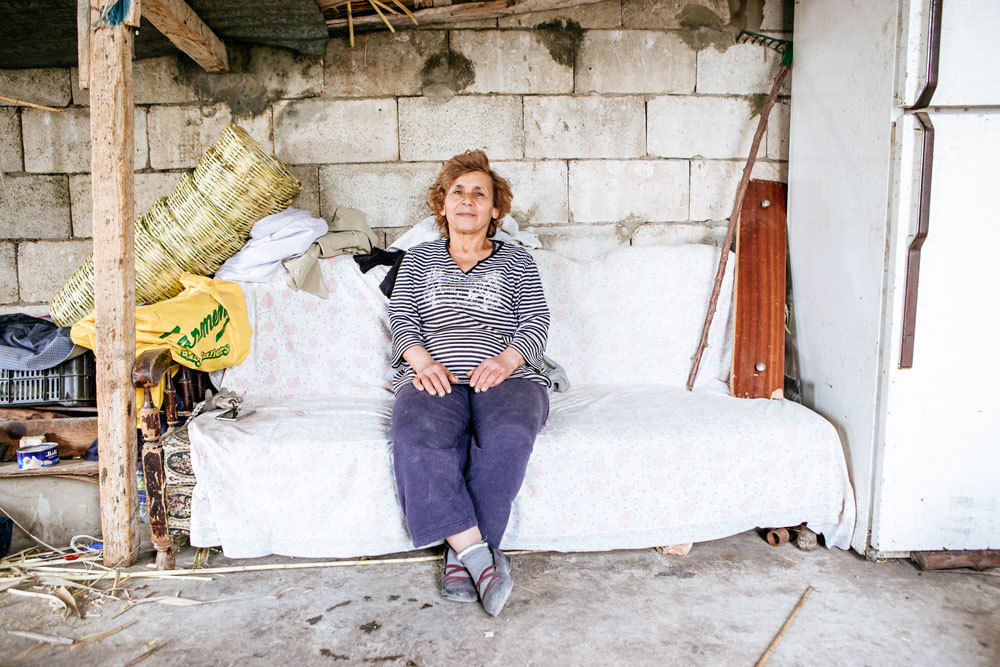 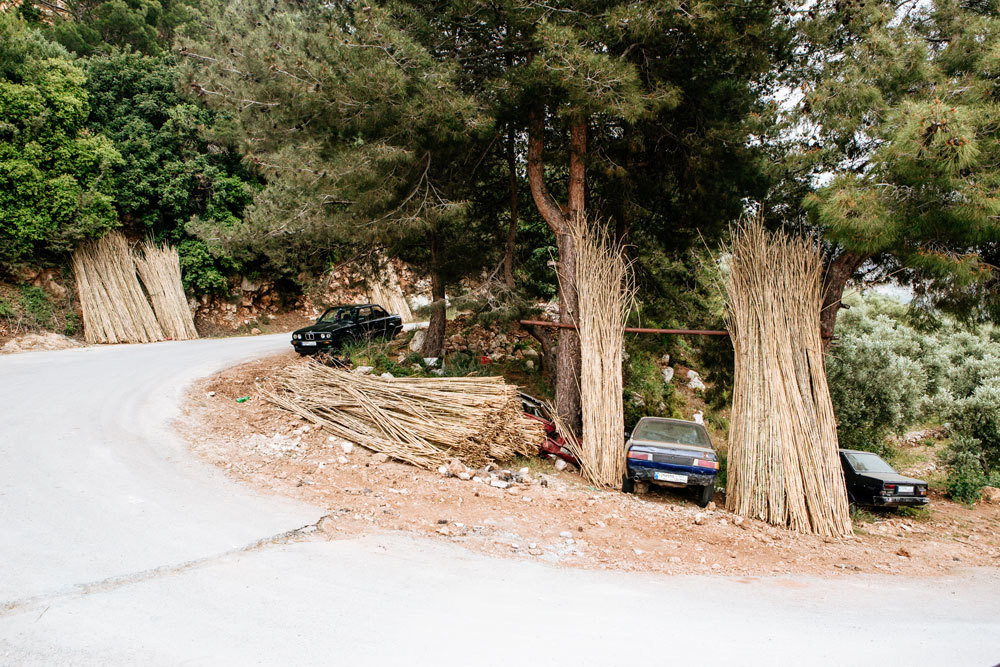 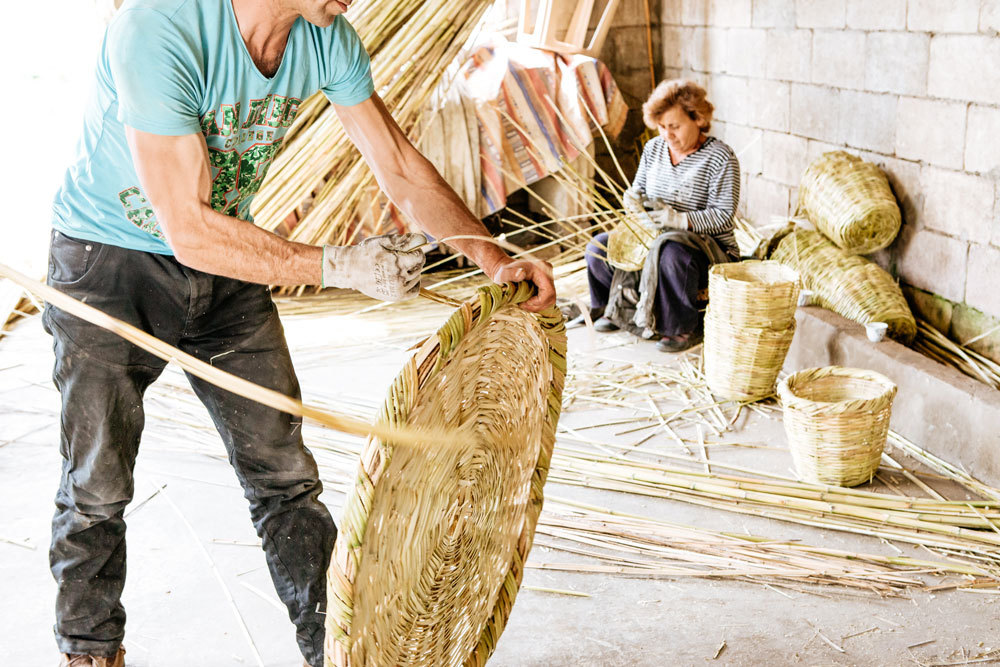 Top: Taking a break in between baskets
Middle: Bunches of bamboo reeds line the area around the Mansours' workshop
Bottom: Toni Mansour and his mother work side by side

Across her lap is a pair of worn-out jeans, laid out to protect her clothes. Knife in hand, she carefully shears the edges of an almost complete bamboo basket; her tenth for the day.

In Lebanon, it’s rather unusual to find a woman working in basket weaving. The craft, a centuries-old tradition in the country, is passed on via paternal kinship, from father to son.

‘In that sense, I’m a latecomer to the craft. I learned everything from watching Youssef and my boys work,’ says Mansour. 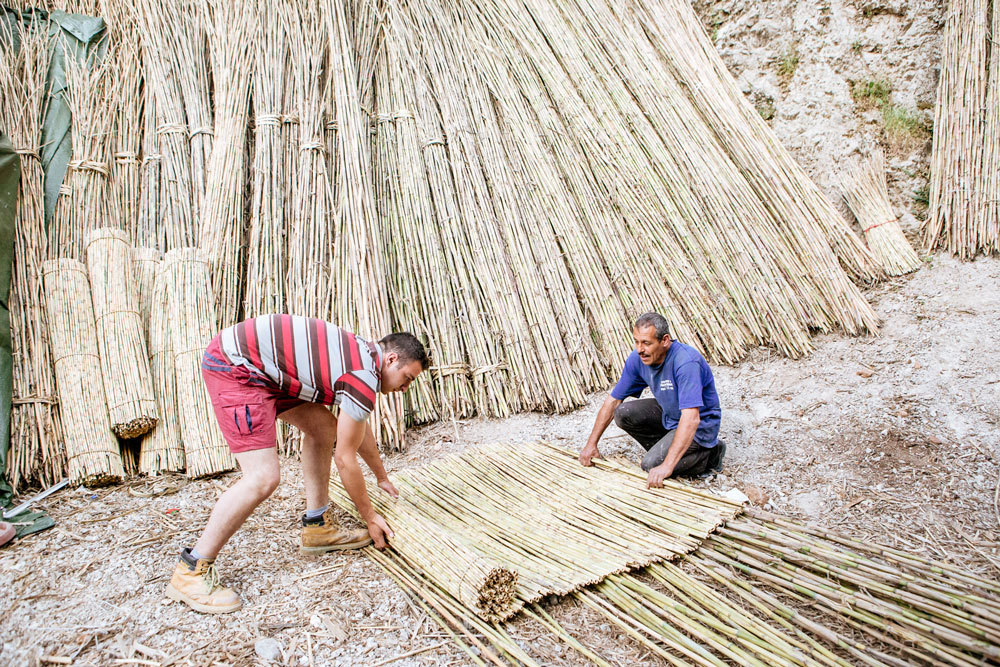 Preparing for a day’s work with bamboo reeds

Keeping the craft alive takes a small team. The sons of the family – Mario, Charbel and Toni – help with several aspects of the business.

‘They usually finish off the circular edges of the baskets. I’m a little heavy-handed when it comes to that part,’ says Mansour with a smile.

Even though it’s unusual to find younger generations interested in the craft, the Mansours ensure that basket making remains a family affair. Once every few years, they host small groups of students in their workshop, teaching them about the craft.

‘It helps keep the tradition alive,’ says Mansour. ‘The students are always fascinated by what they see and leave wanting to learn how to make their own baskets.’

In another part of Sereel, tucked under the concrete pillars of a residential building, is the workshop of Roukouz Licha, another artisan weaver. Bundles of bamboo canes lean against the corners of his workshop, where small chairs of wood and straw wait for someone to sit down and continue weaving. Atop a plastic table sits a fresh pot of coffee.

‘I’ve been doing this job since I was a young boy, just like my father, grandfather and great grandfather before me,’ says Licha. ‘There are around 100 families living off the craft in this area, in villages like Tourza, Mazraat Al-Nahr and Fraidis.’

Licha specialises in making woven bamboo sheets, often used as mats or simple tents. About four by three metres, they are common across Lebanon: restaurants put them up to provide shade in their outdoor seating areas, and gas stations in their waiting spots. 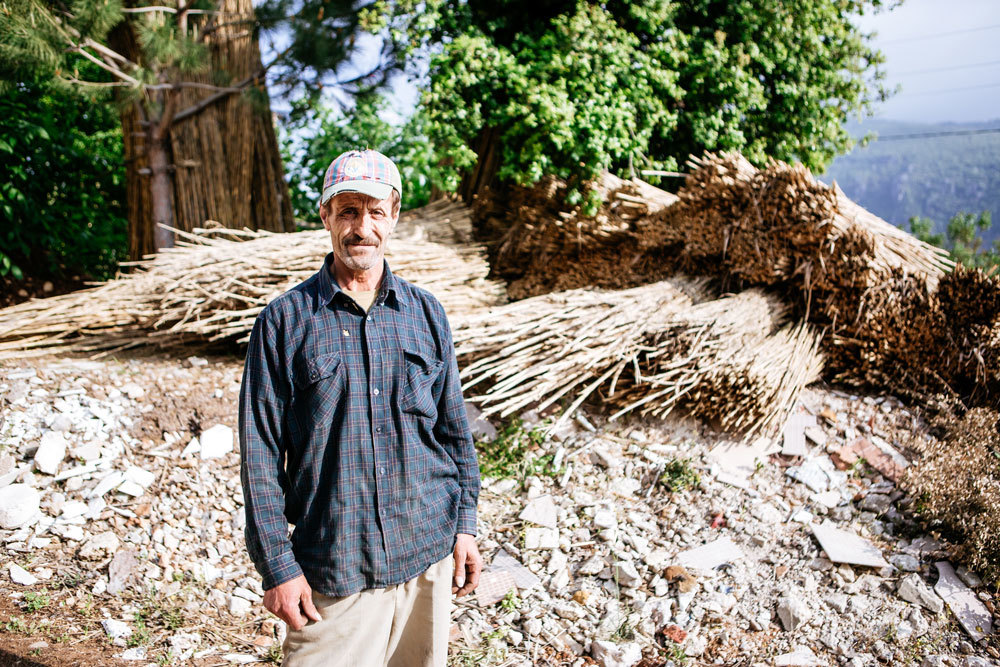 Roukouz Licha, one of a handful of bamboo craftspeople in northern Lebanon 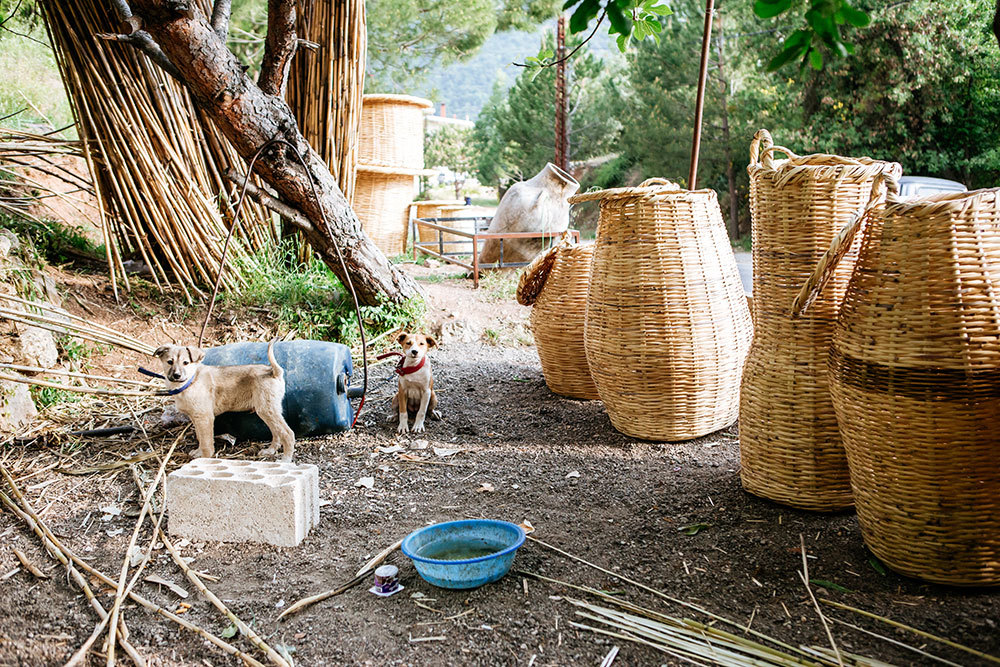 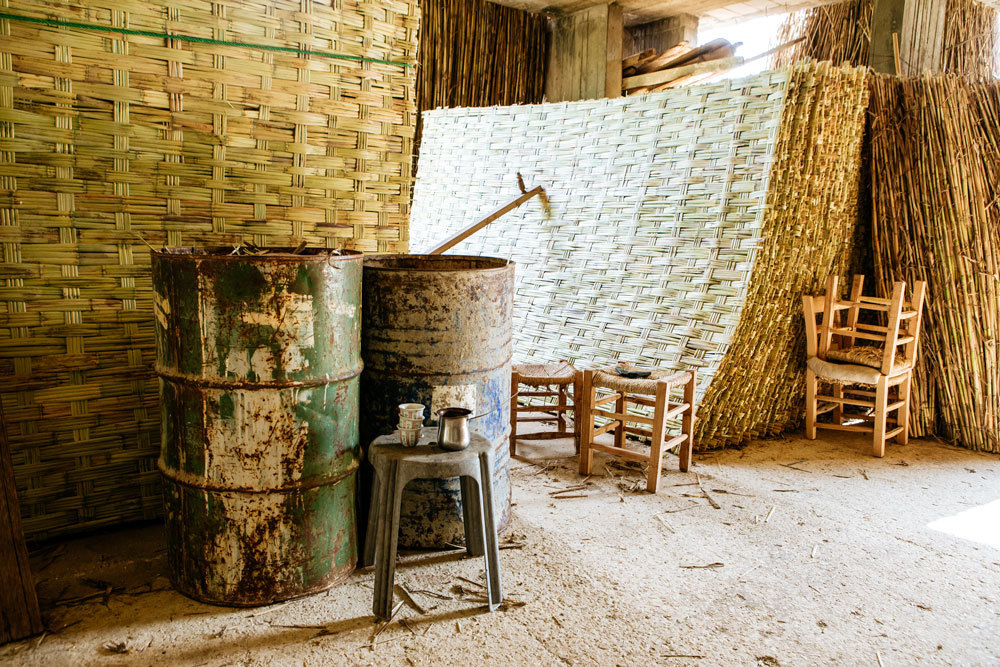 Top: Baskets of different sizes are sold at roadside shops
Bottom: Sheets of woven bamboo line the inside of Licha’s workshop

Both Licha and the Mansour family buy their bamboo from suppliers in Zgharta, who grow along the banks of the river Abou Ali between April and June. Mansour’s sons use a pick-up truck to bring the bamboo back to her workshop. Once there, it begins its metamorphosis into baskets, tents and mats of different sizes.

The transformation process is tedious and tiresome. The reeds are first peeled with a large and sharp knife into uniform shapes, then split with a sickle before soaked in water – the Mansours have a rectangular basin at the back wall of the workshop for this.

‘You have to soak them in water or else they remain stiff, and we’ll not be able to weave them,’ says Toni Mansour. 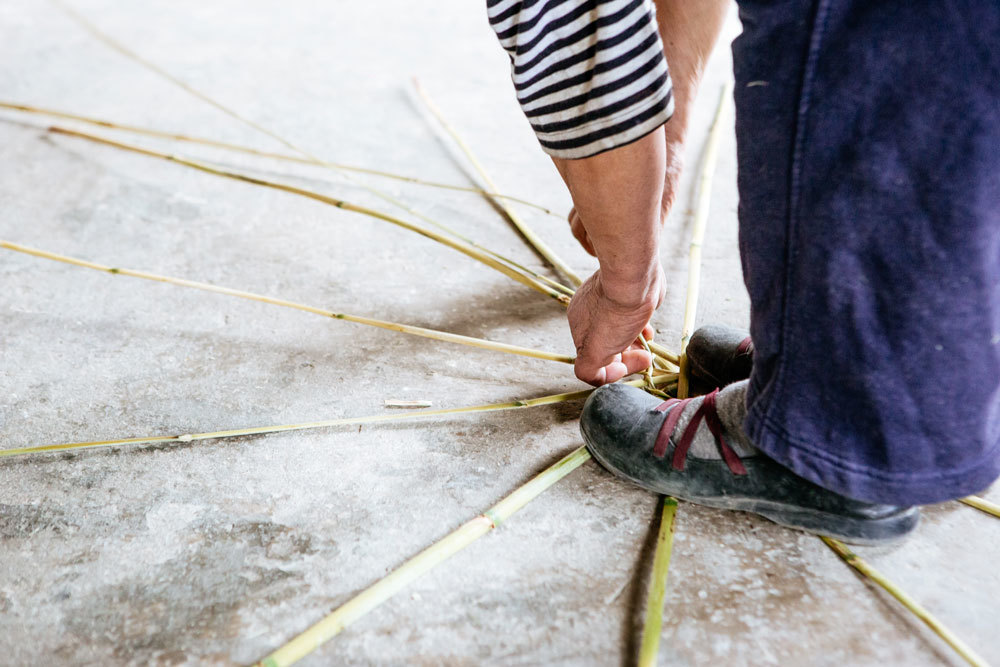 Soaad Mansour lays the bamboo reeds in the shape of an asterisk, weaving the base of a basket

When starting on a new piece, Mansour places a small rock on the ground. This functions as the reference point and a weight, keeping the reeds neatly in place. She then arranges thick reeds in the shape of an asterisk and, one at a time, begins weaving through them using thinner reeds.

From peeling and slicing the reeds with a sickle to flattening them with a concrete roller and finally weaving them, cuts and injuries are a natural part of the process.

‘This job is not for people with soft hands,’ says Toni with a smile. ‘And not for those prone to backache,’ adds his mother. 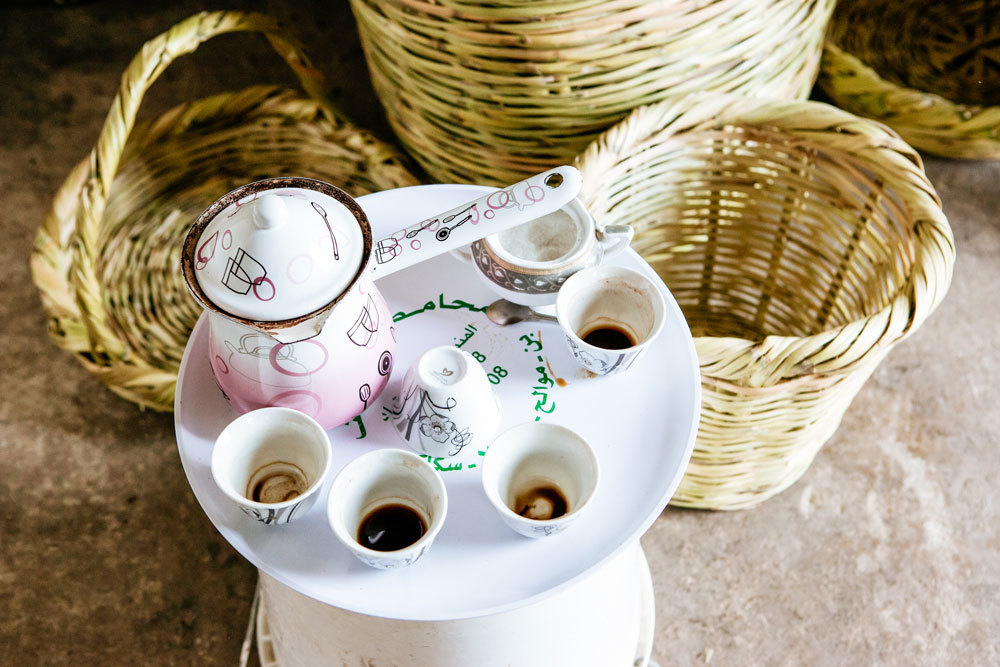 A pot of coffee is Soaad Mansour's daily fuel

Being a small family enterprise, the Mansours set their own work schedule, and remain the sole deciders on how many baskets and other bamboo products are made each day, unless they get a special commission.

‘I wake up early in the morning, have my coffee and rearrange the house, then come here to begin working on the baskets,’ says Mansour. She makes around 12 of them in the span of two days – the most laborious part of which is made more tolerable with a simple formula: radio and coffee. ‘I turn on the radio to listen to music or news programs, but the real key to keep working is coffee,’ she says with a smile.

Bamboo baskets form an essential part of household life for many residents in Lebanon, and are used by many of the country’s small-scale manufacturers. Larger ones store grapes for winemaking; smaller keep fruits, vegetables and olives after harvest. Fishers in coastal towns put both fish and baits in the baskets – and city dwellers in tight-knit neighbourhoods send them down from their balconies on a string, often shouting their requests to the shopkeeper waiting below, then haul them up once they’ve been filled with goods.

Toni points to a recently completed piece formed like a large disc, used to make the cheese shanklish.

‘Once the yoghurt is strained and shaped into balls, they are placed on this and left to dry in the sun for a couple of days,’ he says. 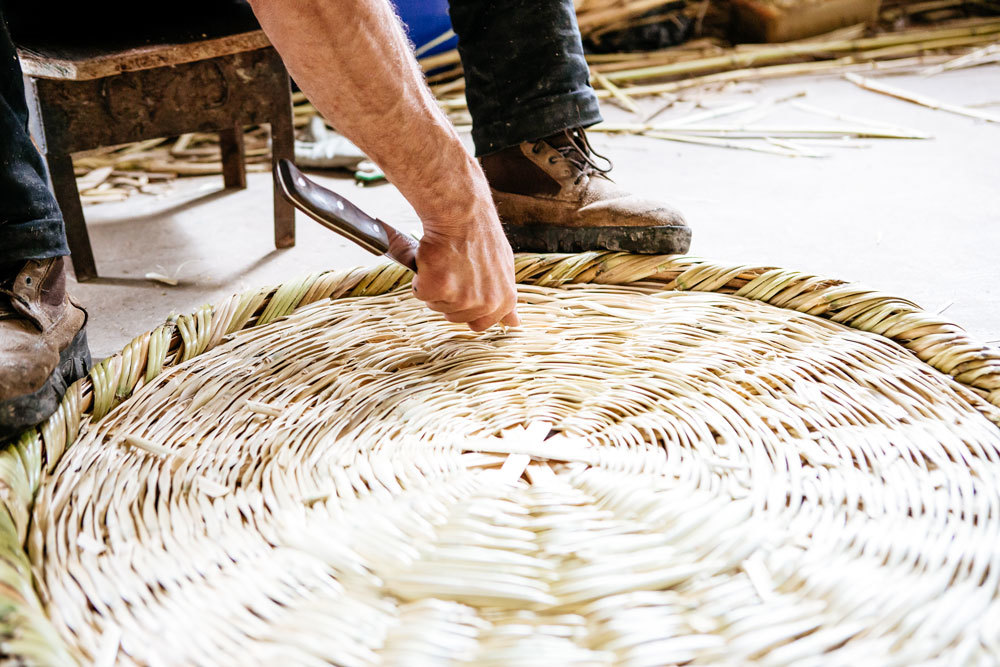 Despite the difficulty of basket weaving work and the risks of getting painful cuts, both the Mansours and Licha are advocates for the importance of keeping the traditional art alive.

‘There used to be many more craftspeople working in this business but it’s no longer as popular, which makes our work even more important,’ says Mansour.

Both families pass on the craft as artisans in the area have done for generations. It requires patience and dedication, and long hours spent transforming simple bamboo reeds into carefully woven creations. What keeps the tradition alive is a combination of commitment on behalf of the craftspeople and a sense of pride, in each and every finished product.