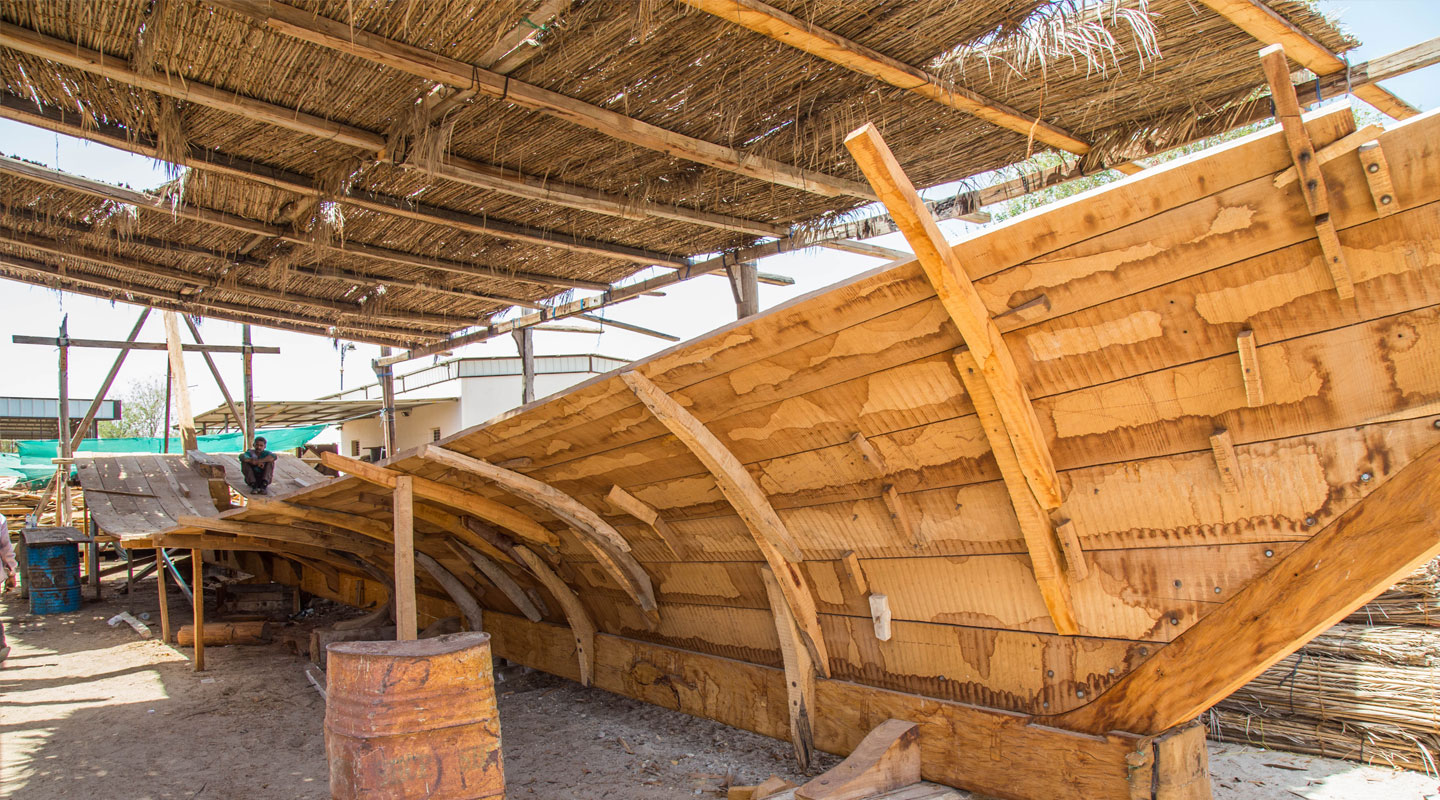 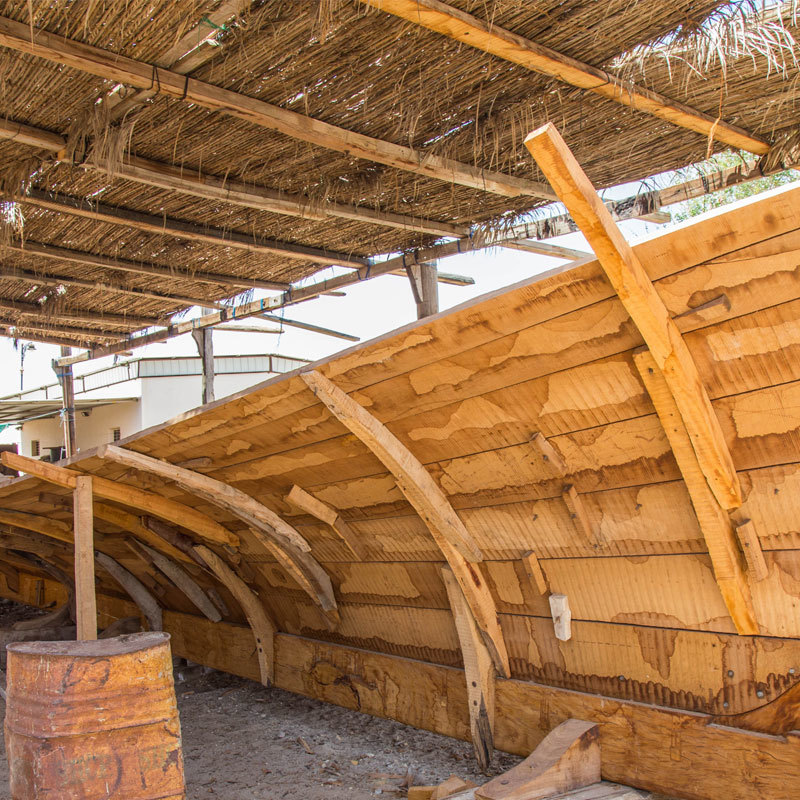 A handful of men walk through one of the last shipyards in Oman, stepping carefully over scraps of wood spread out on the shore.
They carry a long, solid wooden plank between them; on top of a handmade ladder stands another worker, waiting to catch it.
With one hand, he holds on to a large boat, currently in the making.

Built by hand, these sturdy wooden dhows once sailed around the world. They were a pivotal part of Oman’s rich trading history, travelling as far as India, China and East Africa. The sultanate’s rich trading and seafaring history comes from its strategic location on the tip of the Arabian Peninsula, which facilitated a culture of exceptional shipbuilding and navigation skills.

Today, some of the few remaining shipyards are found here on the seafront in Sur, a small Omani coastal city with a prominent history of making the vessels. 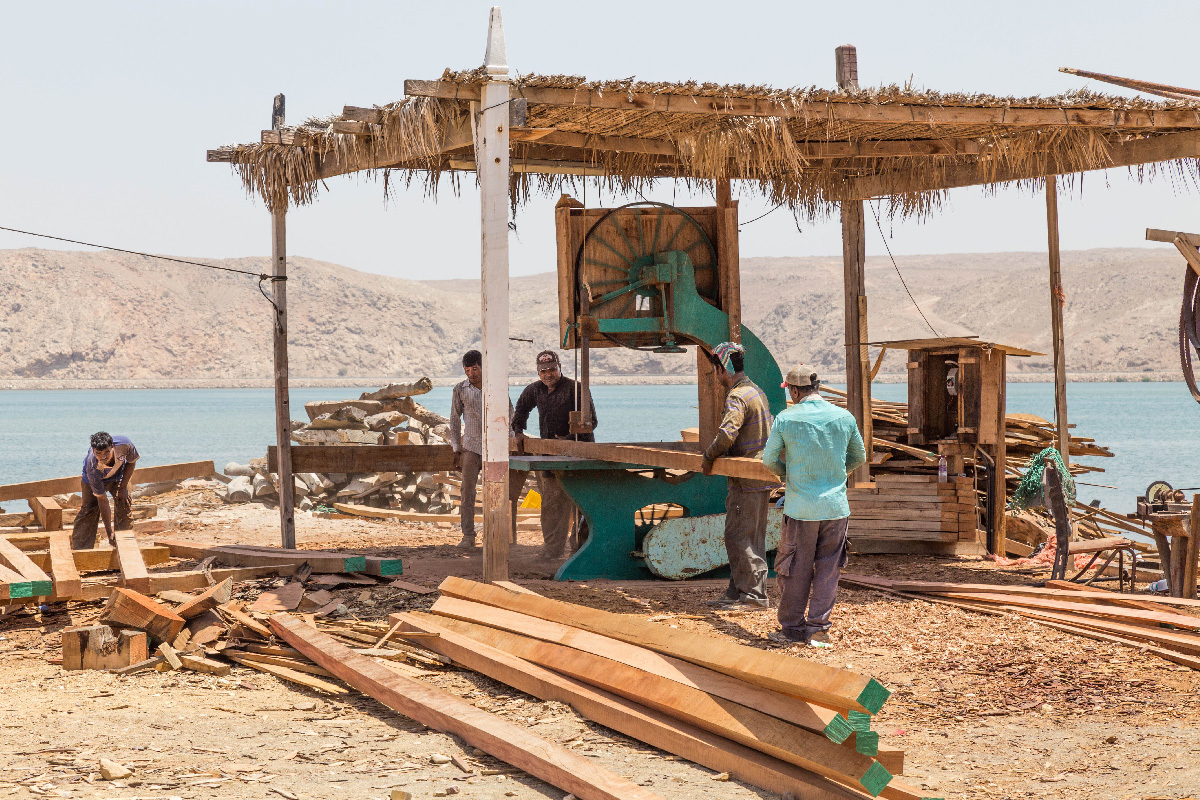 Under the shade of a makeshift stand, Bangladeshi carpenters feed a piece of wood through an old saw 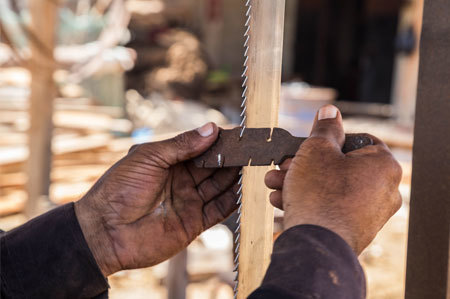 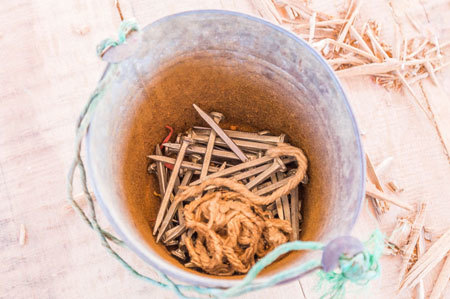 Left: Allam sharpens the blades of a large saw used for cutting the wood used to make the traditional dhows

Right: The wooden panels of Dhows were traditionally tied together with ropes made from coconut palm fibre. Nails were introduced later in the boat’s history

Traditionally, wooden dhows were not made with nails, but stitched together with ropes of coconut palm fibre. The ropes, which were threaded through holes in the wood by hand, over and over again, secured the planks together. Coconut palm fibre was used because of its elasticity and ability to expand once wet, perfectly filling any gaps.

‘The wood we use today is a combination of wood from Oman and Malaysia, imported through Dubai,’ says Said Allam, a carpenter who has been building dhows in Sur for the past 22 years.

While shipbuilders today utilize some modern technology and electrical equipment, they still use plenty of basic hand tools. There are no blueprints or sketches. The boats, earlier made by local Omanis but now supported by Southeast Asian carpenters, are made entirely from memory and experience. The ownership of the shipyards remains with Omani families, who have been building dhows for hundreds of years. 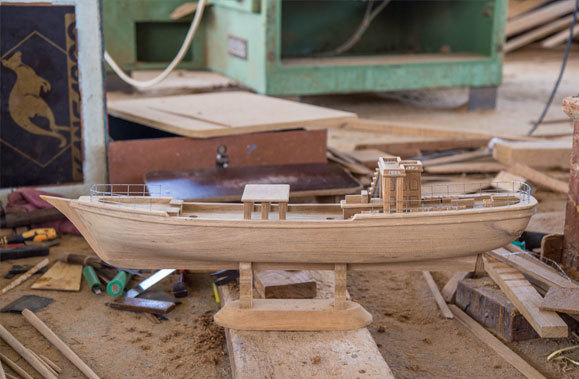 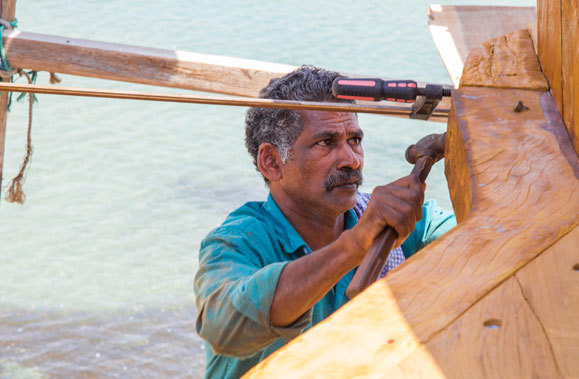 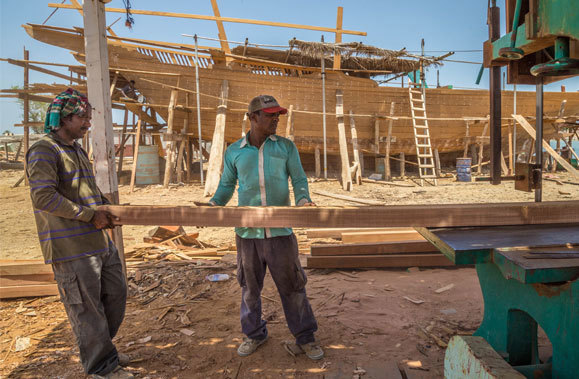 Top left: Small model dhows, later sold as souvenirs, are made in one of the last two shipyards in Sur
Top right: Babol and Halal, both carpenters from Bangladesh, saw a piece of wood

Bottom left: Vaseal, a carpenter from Kerala, India, works on the exterior of a traditional Omani dhow
Bottom right: Though many modern tools have been introduced over the years, much of the building is still done by hand

‘From 2008 to 2017, a joint government initiative was created to train 15 Omanis in building and woodwork,’ says Eric Staples, director of Maritime Oman and assistant professor at Zayed University in Abu Dhabi. Its aim was to preserve Oman’s maritime past, and continue its tradition of skilled shipwrights.

More than two decades ago, Abdul Nasser Mubarak Salim Farsi acquired a small shipyard in Sur, on a piece of sandy land near the sea. This is where a total of five carpenters still work to keep the tradition alive. Allam, the most senior of them, came into the industry from his own interest in the craft, after arriving in Oman from his native Bangladesh over 20 years ago, and has been building dhows at Farsi’s shipyard ever since. Farsi himself entered the industry after realising the importance of the craft to his cultural heritage, and to contribute to its preservation.

‘I had a keen interest in dhows and the shipbuilding process.
It’s an important pastime for me,’ says Farsi.

Omani dhows maintain a reputation of excellence across the Gulf.
Today, as demand has declined over the years, shipyard owners sell a limited number of vessels to private owners, mostly from Qatar.
A recently passed Qatari law now allows only wooden ships to be docked along its corniches. This increased interest in wooden dhows in Qatar has somehow revived the shipbuilding industry in Sur.

In Sur’s natural lagoon, not far from where Farsi’s craftspeople work, is another shipyard, where tourists climb in and out of a wooden dhow in the process of being built on the water. For this shipyard and others, attracting tourists has become a supplementary income that accounts for the fewer boats being built compared with the past. 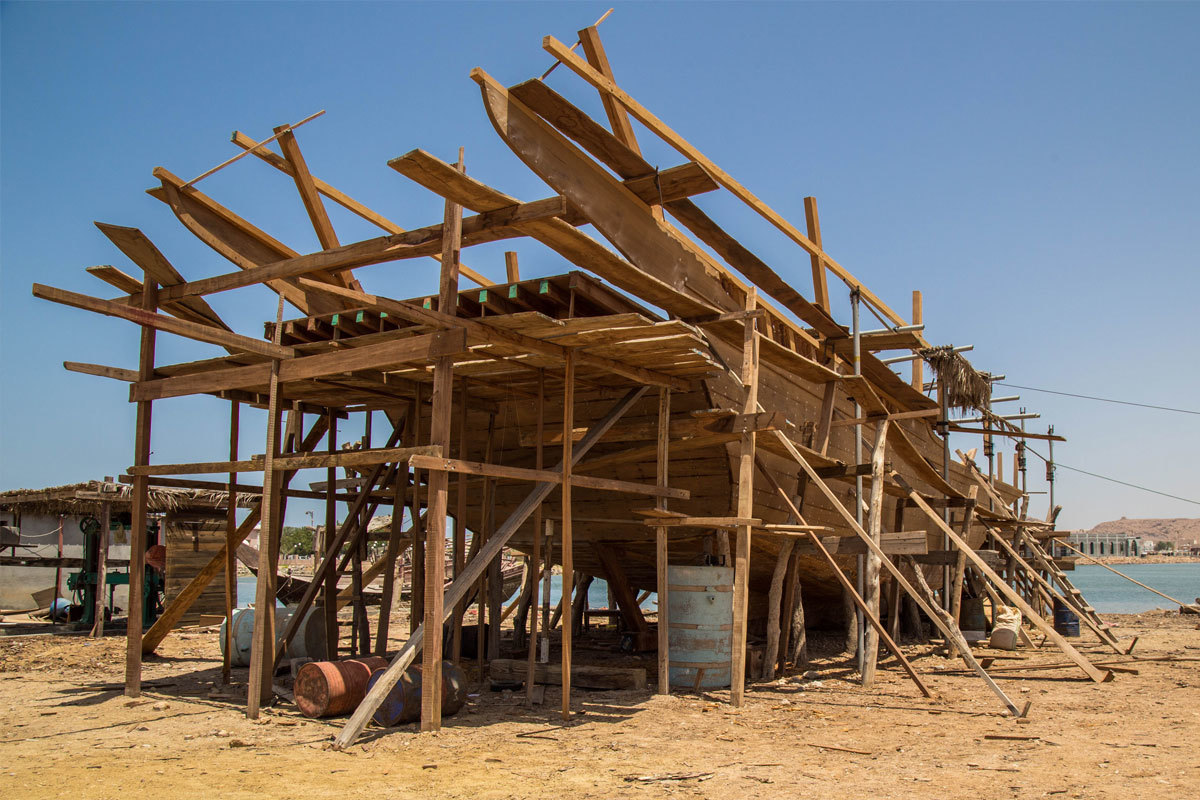 Halfway through the building of a traditional dhow

Even while not used as much, these large and carefully crafted vessels remain an intricate part of Omani culture. Dhows can be seen throughout the capital Muscat, particularly along the corniche, which stretches along the shore. The boats, with their wooden silhouettes, serve as a reminder of Oman’s dominance on the famous silk route and its people’s accomplishments as brave and farreaching sailors throughout history.

‘Some things don’t become valuable until they become rare. It’s amazing that dhow building lasted as long as it has,” says Staples. 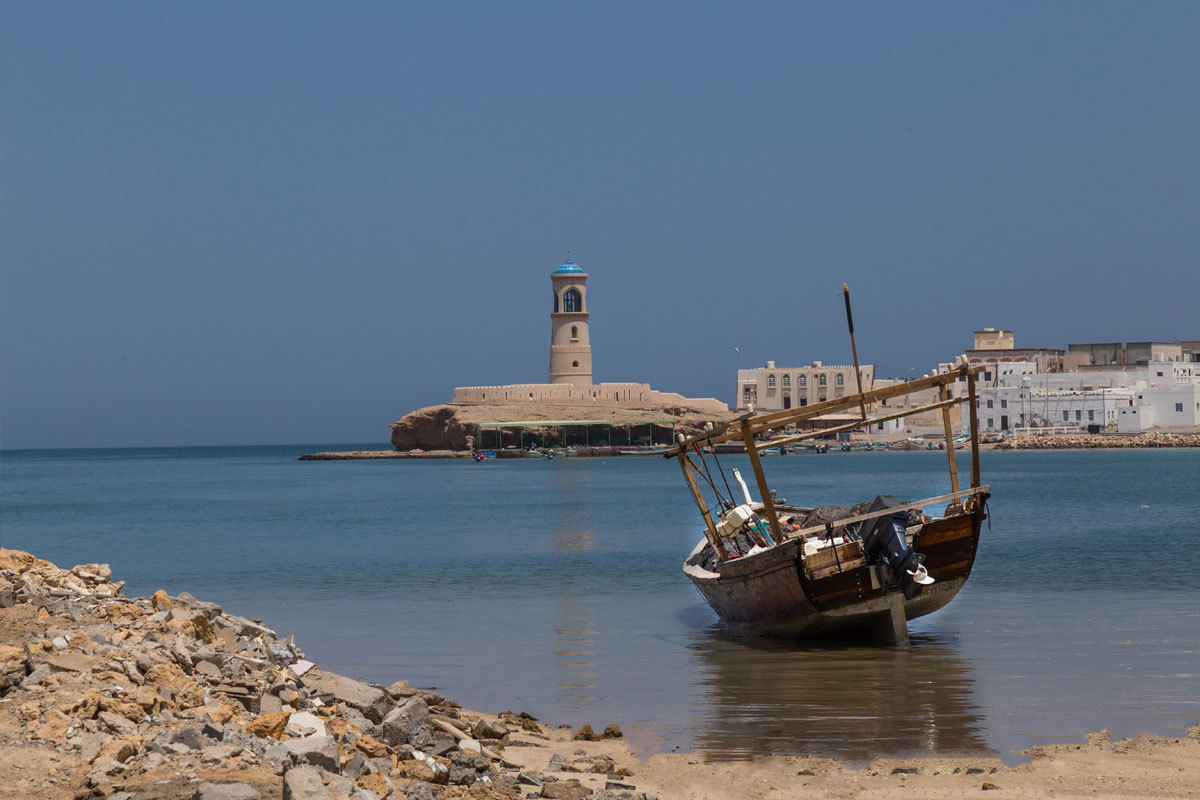 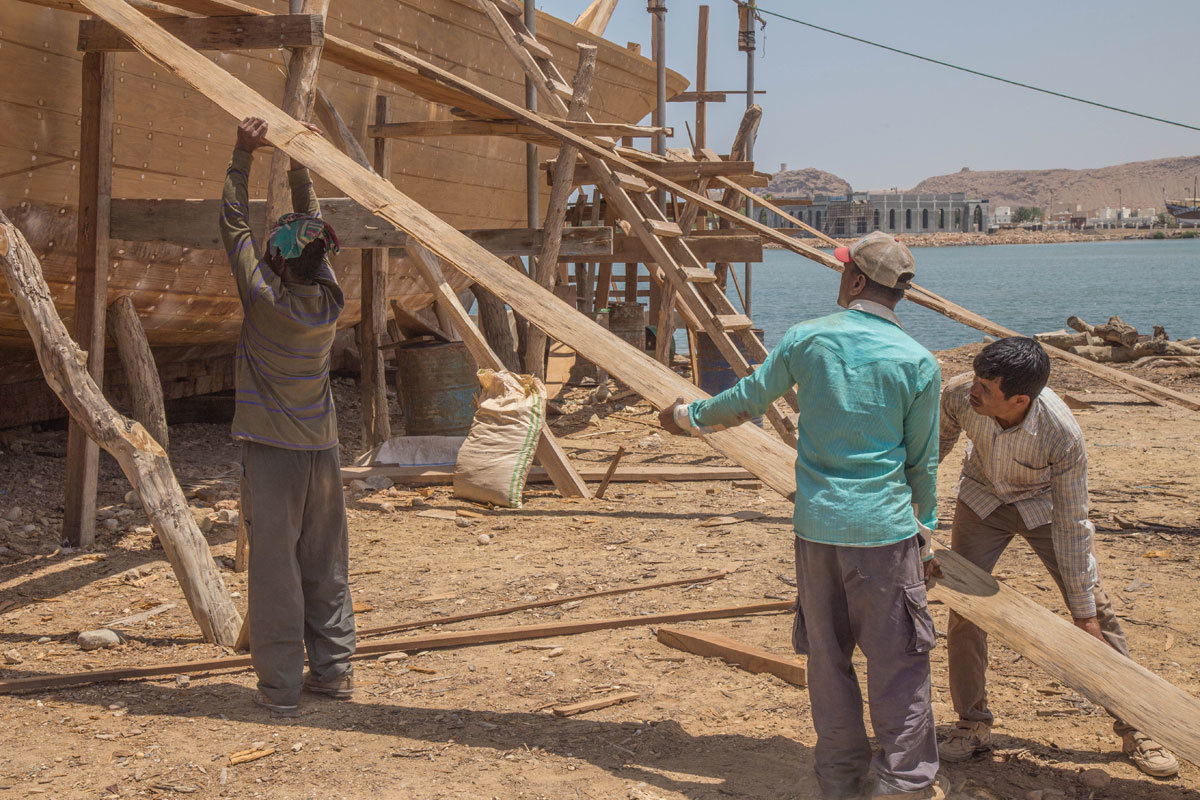 Left: A boat is docked in the natural lagoon in Sur, a coastal Omani town, where traditional wooden dhows are still made in two shipyards

Sustaining the craft of handmade dhows is no easy feat. In the past, boats were built by craftspeople primarily to make a living. Today, when there is no exclusive commercial need for dhows, maintaining the craft relies on changing its purpose.

‘There is a desire to keep the tradition alive, and people are interested. Oman takes pride in its maritime history and there are agencies aware of its current standing who are trying to preserve it,’ says Staples.

Down by the sea in Sur, the boat builders remain busy. They move around the shipyard seemingly in complete sync with one another. Most have been doing this work together for many years, and assemble the boats with ease. The midday sun shines hot; the air has a smell of salty water. Soon, another wooden ship will set sail, departing as so many times before from these historical shores.