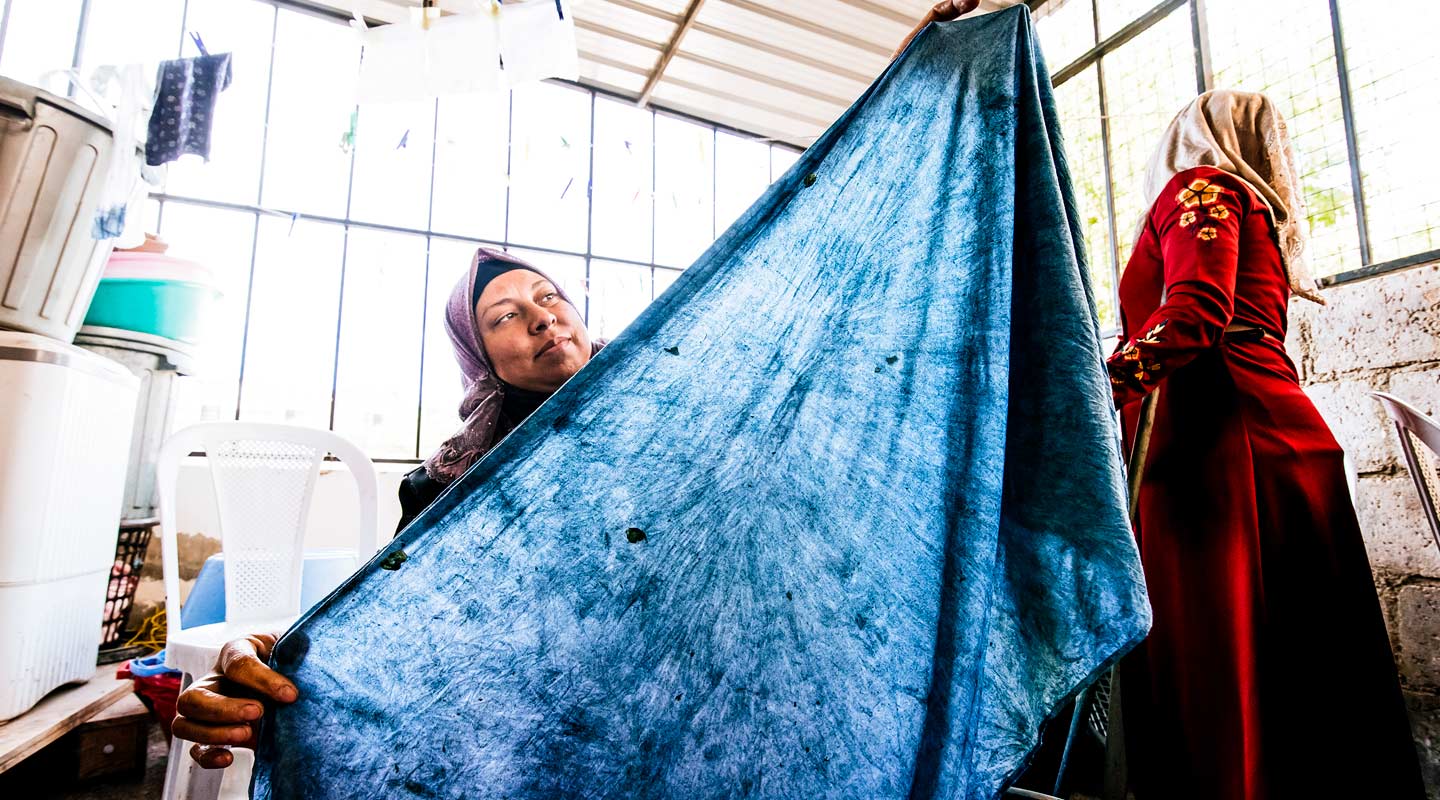 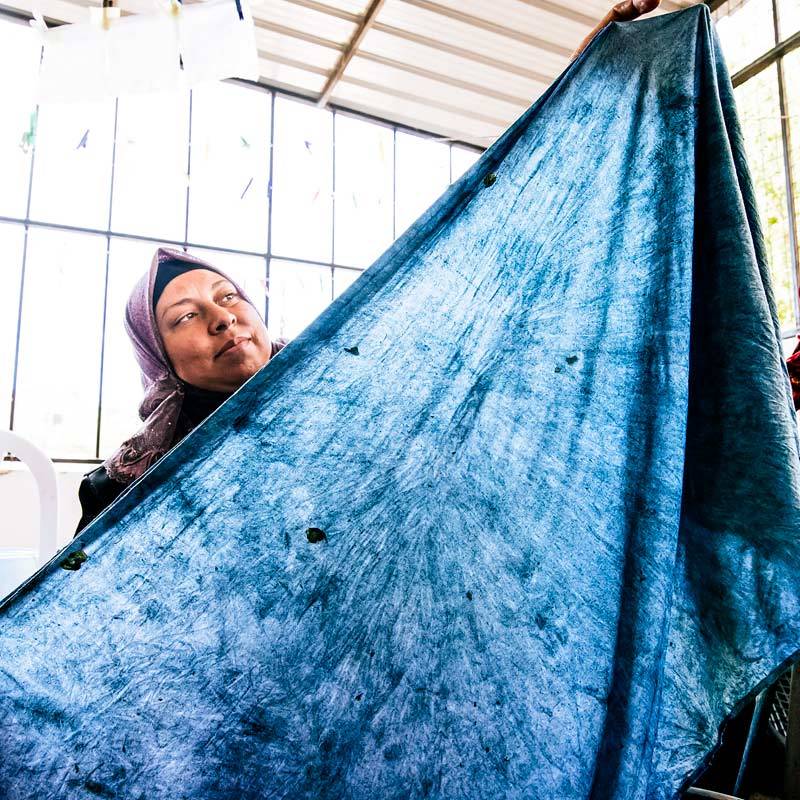 ‘When you plant it and harvest it and process it with your own hands, don't you feel for it?’ – Arwa Shamalaat

To get to the village of Ghor Al Safi, one must abandon the traffic-choked streets of Amman and descend to the Jordan Valley. After driving for two hours, passing hotels perched on the bank of the Dead Sea, desert vistas and hot springs, The Ghor El Safi Women’s Association for Social Development sits at the foot of a large mountain, down a narrow side street with a blacksmith on the corner. It’s an unassuming site for the revival of a millennia-old process that once made this area a centre for indigo, a dye so precious it was known as ‘blue gold’.

These days, the dye is most associated with the production of denim for blue jeans, but historical records indicate that indigo was used as early as 6,000 years ago. Arab merchants were thought to have brought the dye from India (the name derives from the Greek ‘indikon’, meaning ‘Indian’) to Europe, but it was used the world over for fabrics, paintings, medicines and cosmetics. By the 19th century, demand was so high that indigofera tinctoria, the legume from which the dye was made, was cultivated on an area more than two-thirds the size of Lebanon, with each plant leaf containing two to four percent of dye.

Ghor Al Safi was known for the production of indigo during the early Islamic period, archaeological records indicate. Yet by 1914, like elsewhere in the world, natural sources made way for synthetic alternatives. The art of cultivating this valuable crop and processing it into dyes disappeared from Jordan. 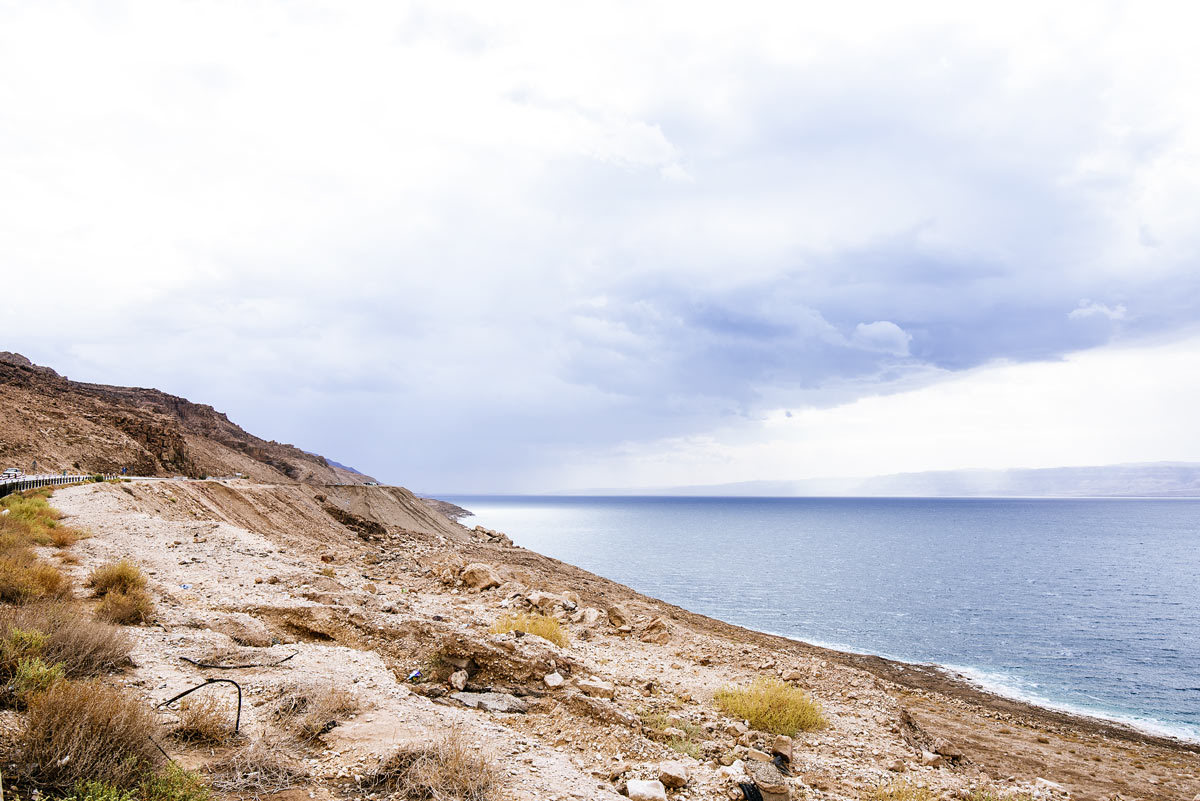 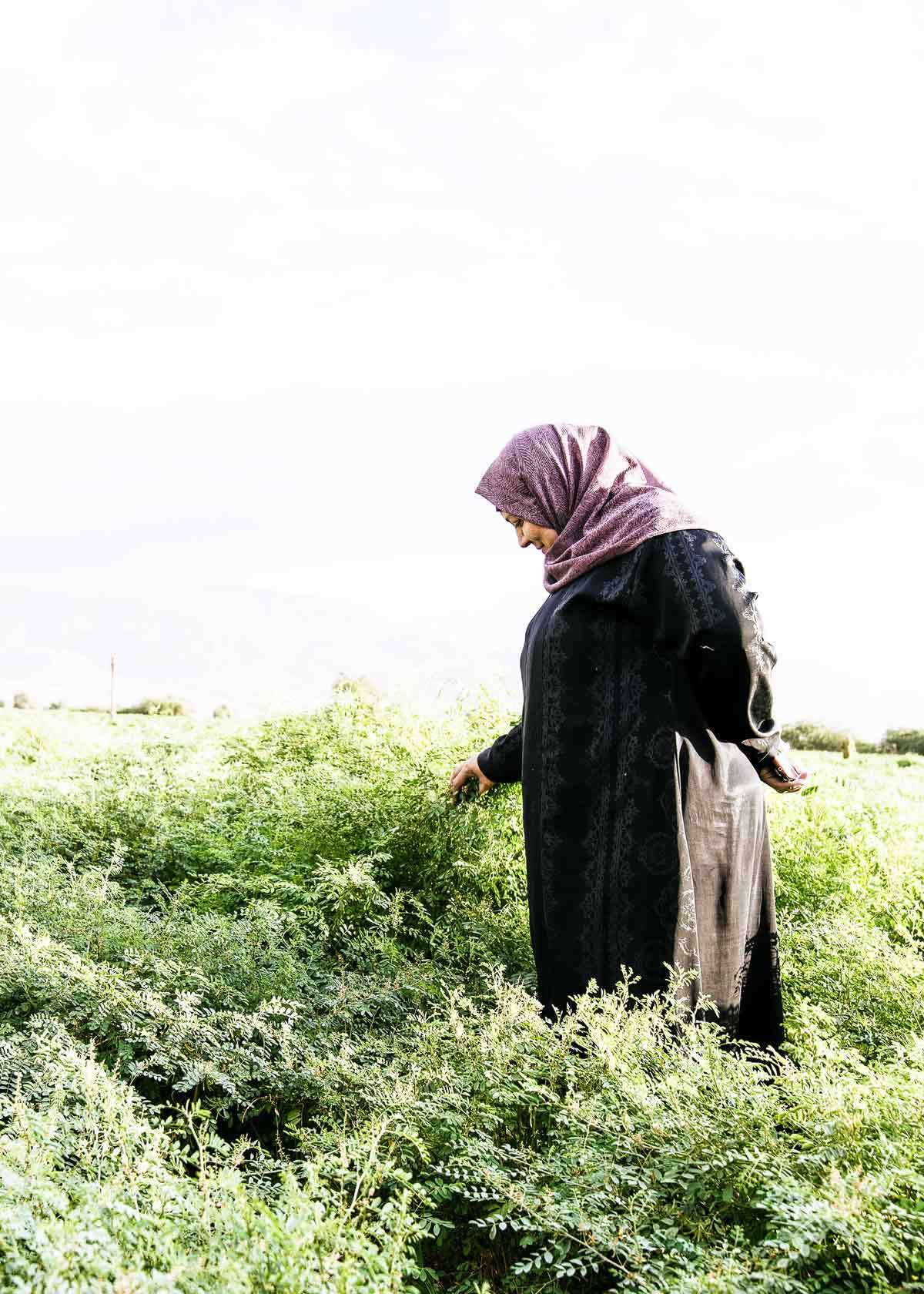 Top: The Dead Sea is not far from the association

Bottom: Fatima Bazlamet inspects raw indigofera, which is cut and soaked in water before its used as colouring 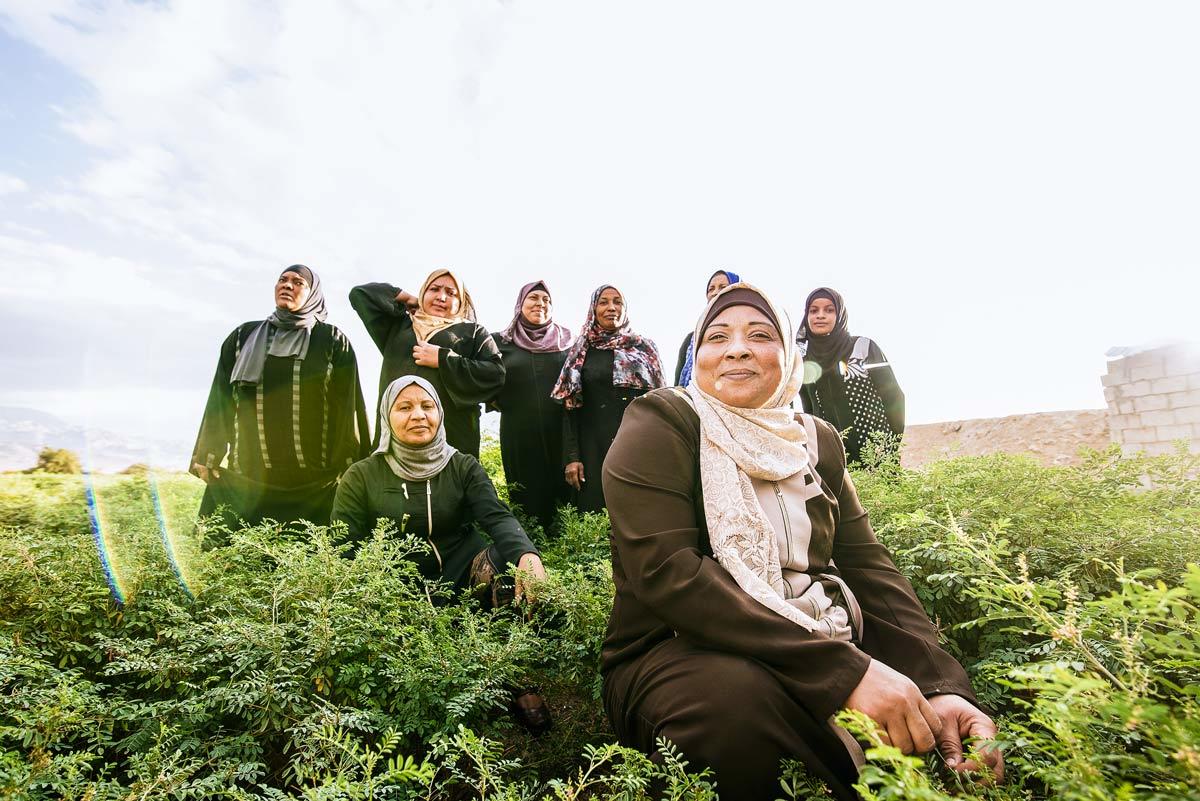 Craftspeople from Safi Crafts in the cooperative's indigofera field 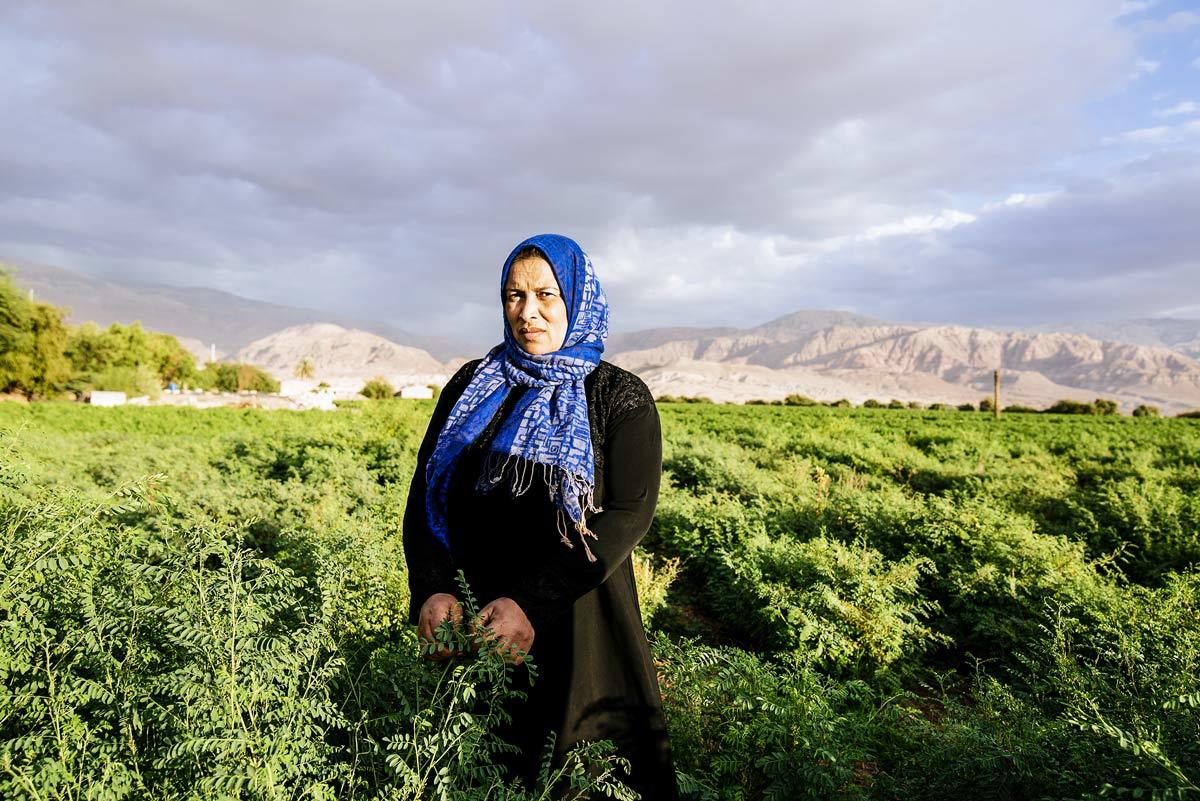 The story of its re-emergence in this small village, south of the Dead Sea, began with rejection. In 1996, Nofah Al Nawasrah, a resident of Ghor Al Safi, applied to join a men’s cooperative but was denied membership. Incensed by her rejection, she created her own organisation along with 21 other women. Three years later she started Safi Crafts, a project aimed to harness the women’s knowledge of dyeing and embroidery to produce and sell locally-made handicrafts.

‘We started dyeing with sand in 1999 and then acrylic, but in 2012 we began to use pomegranate, tea and other plants to produce red and yellow colours,’ says Nawasrah. ‘These alternatives are better than sand and keep the colour more.’ It wasn’t until 2014 that the women began to incorporate indigo, called neely in Arabic, into their products by importing dye from abroad. But a year later, says Nawasrah, an archaeologist discovered indigo on some of the ancient clay pots excavated near Ghor Al Safi. ‘This meant that the area had neely plants before,’ explains Nawasrah. That fact pushed the UN’s Educational, Scientific and Cultural Organisation (UNESCO) to bring indigofera seeds from India. ‘We planted them on two dunums (2,000 square metres). It was a success.’ 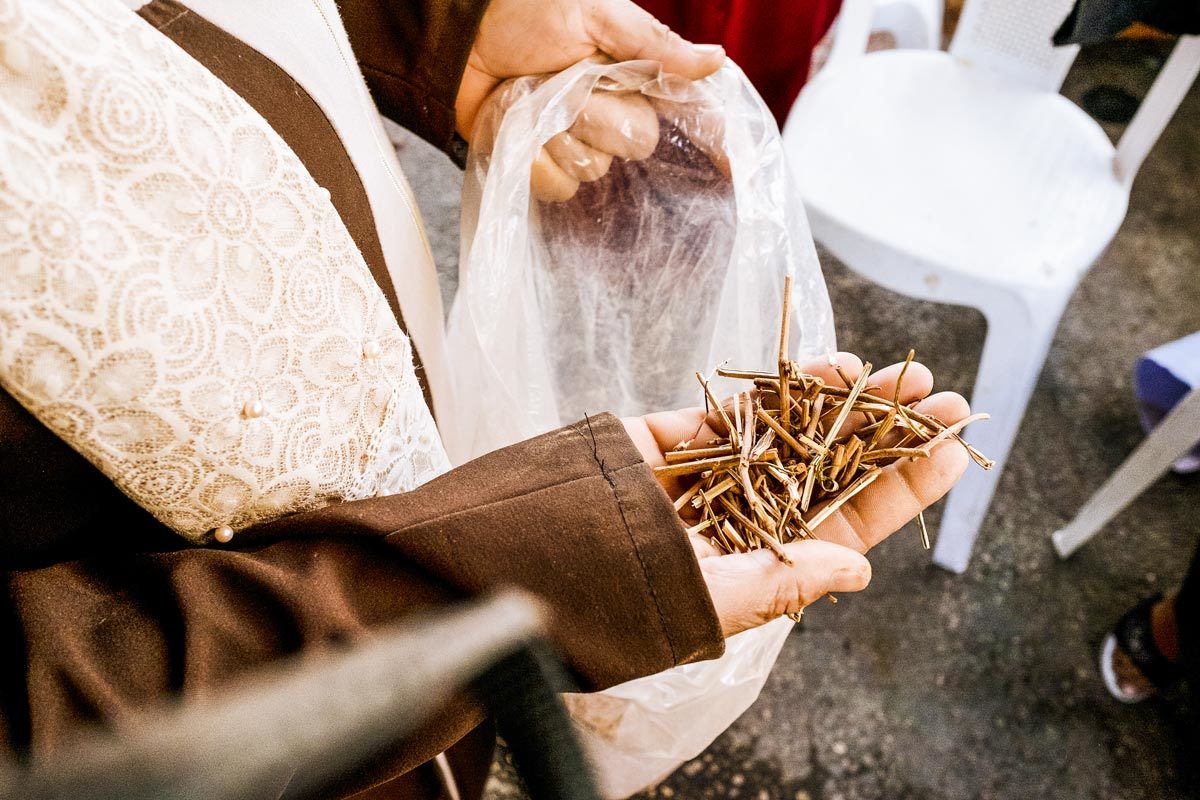 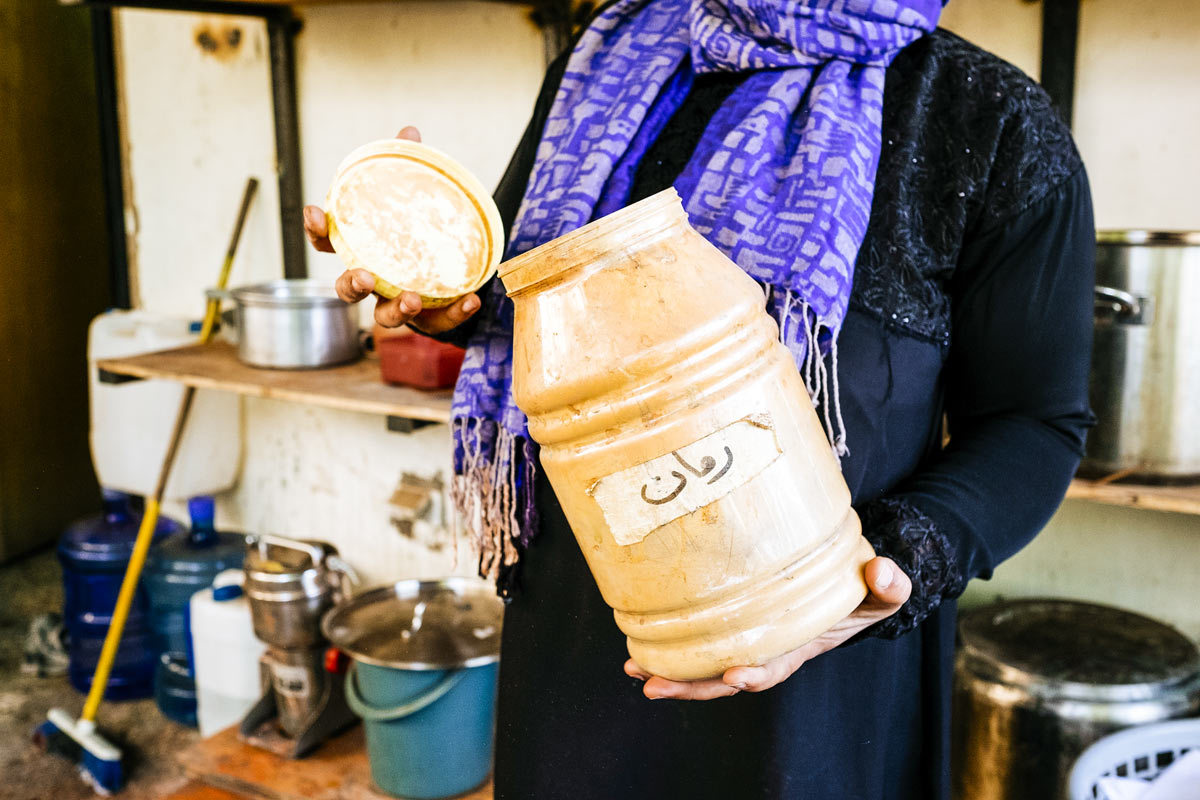 Safi Crafts uses local, natural material for their dyes, including sprigs and pomegranate turned into powder

The process of making the dye, essentially unchanged for thousands of years, begins in a field a 10 minute-drive from the association’s building. Here, hidden among acres of tomatoes and eggplants interspersed with palm trees, are the 5,000 square metres planted with indigofera for the project.

Arwa Shamalaat, a member of the association for eight years, bends down with her manjal, a short sickle known as qatoonah in the local vernacular, to cut sprigs of the plant, which takes anywhere from 23 to 30 days to grow. In the summer, Shamalaat says, the quality is better because ‘it loves heat.’

She and the other women in the cooperative will come after evening prayers and soak 13 bucketsful of indigofera into a tank full of water. A day later, the nowfermented plants have released the dye into the water, giving it a murky bluish colour.

The solution is then transferred into a second tank using a pump, which helps aerate the dye – oxidation is an essential part of the process. It’s then filtered into a third tank, where jeer, or chalk, is added, before finally being transferred to cheesecloth bags to air-dry. The result: precious cakes of indigo dye, which are then taken to the association to be sold, or used to give clothing and accessories the brilliant blue hue that has made indigo dye Safi Crafts’ most coveted product.

‘All the process, from A to Z, uses nothing but natural ingredients,’ says Nawasrah, a hint of pride in her voice. 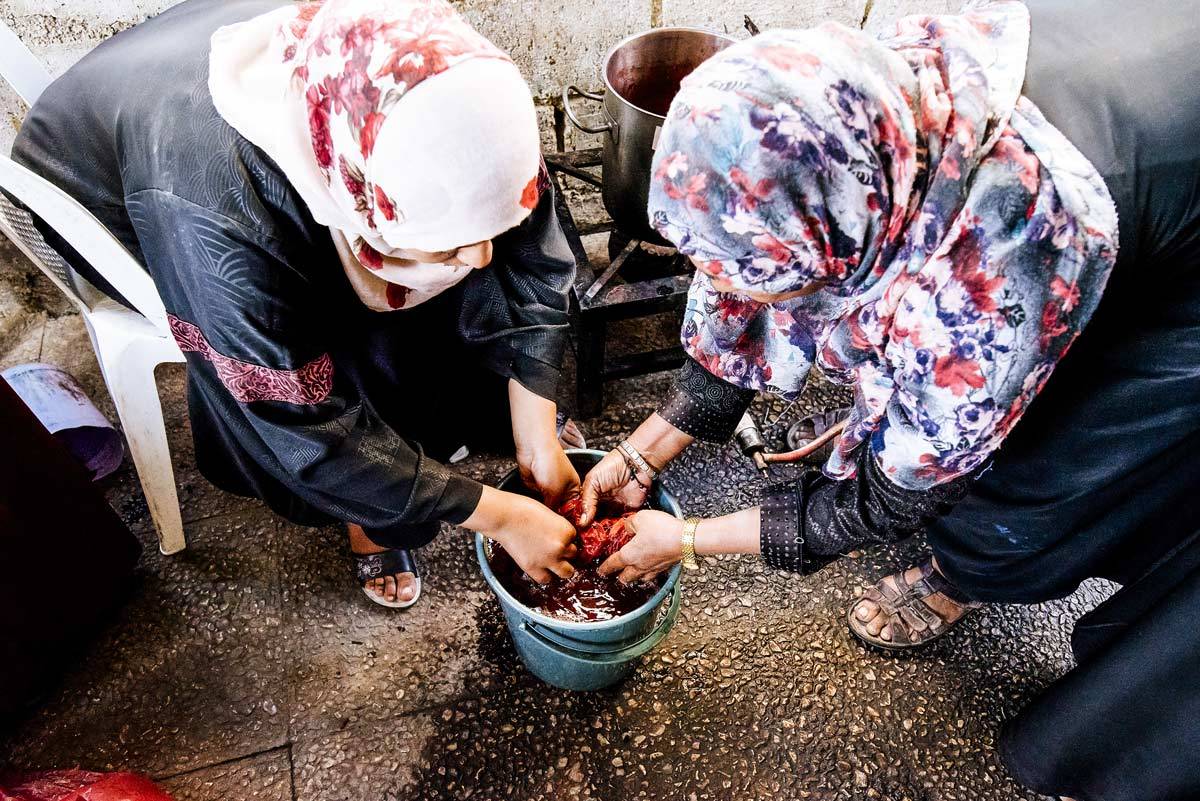 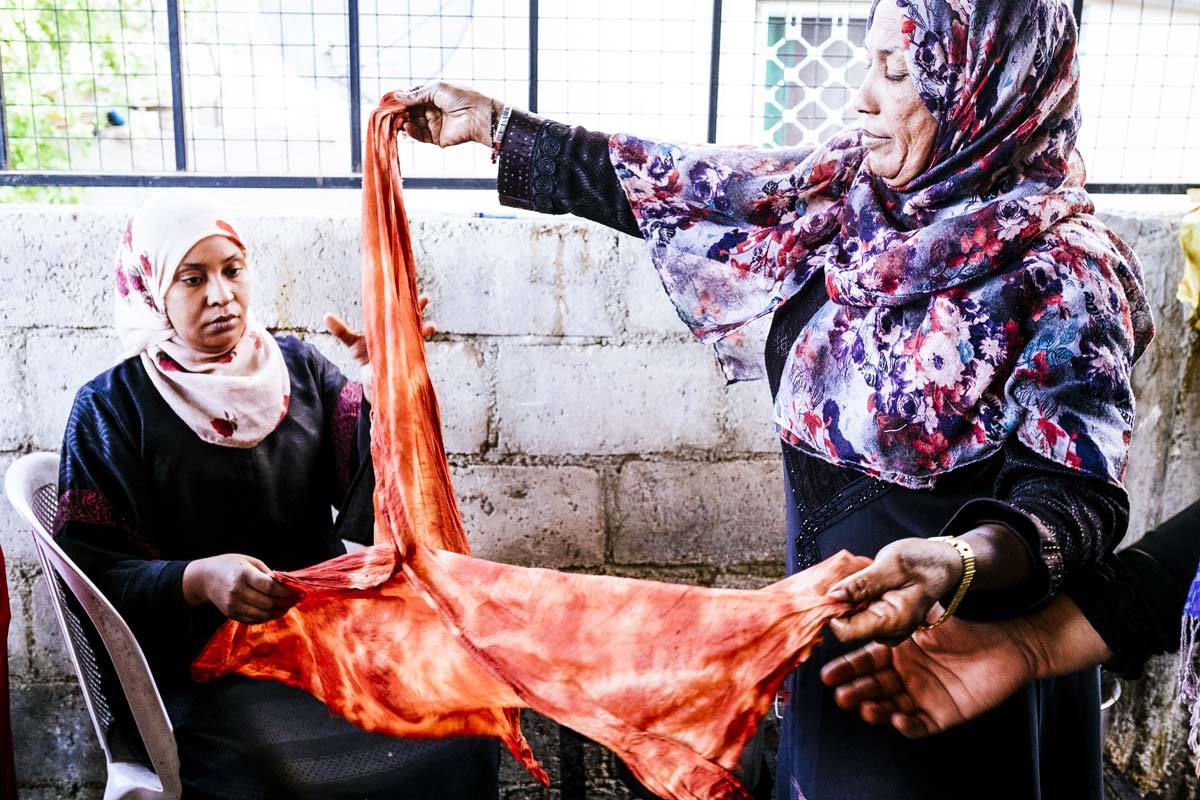 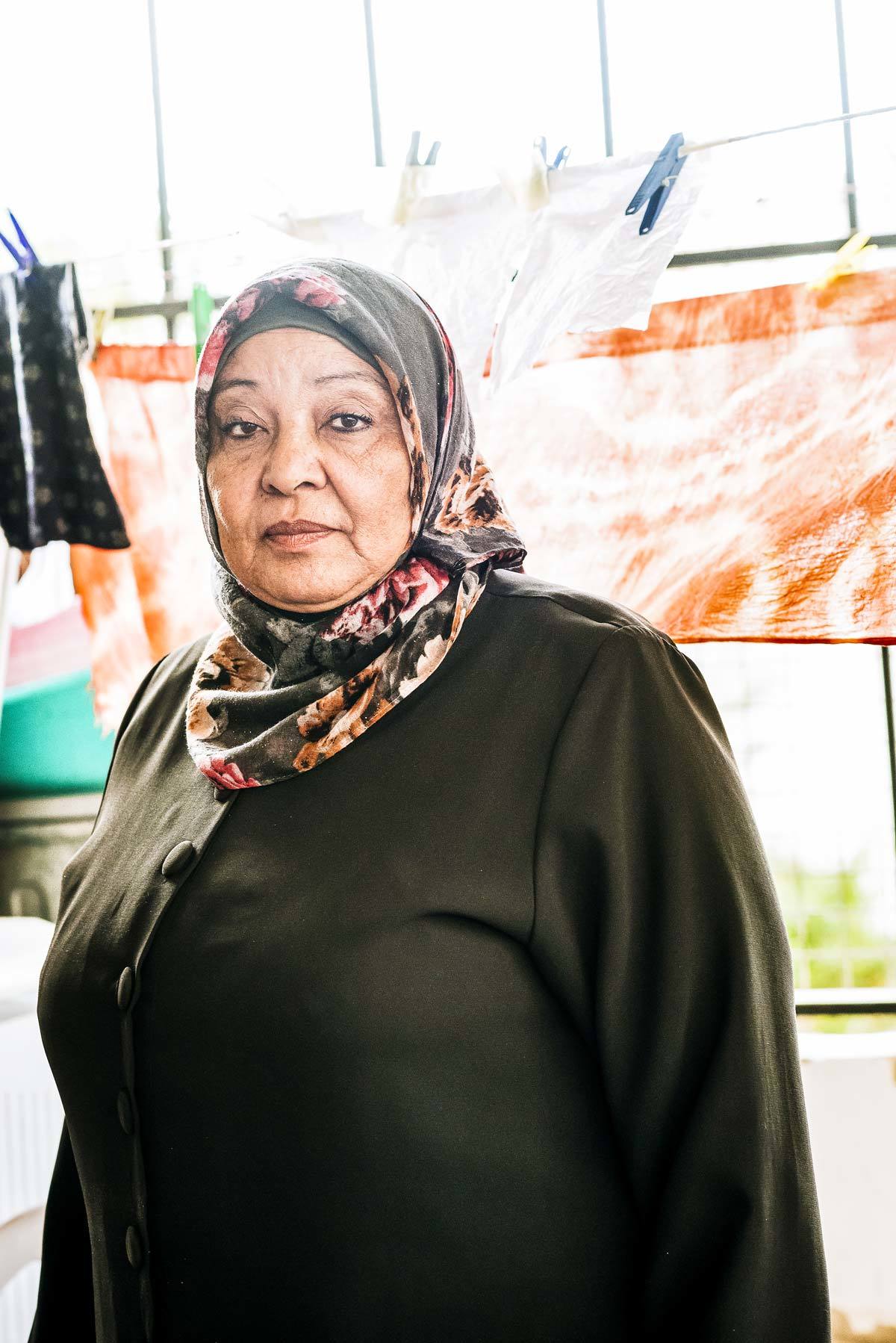 Top: Textiles are immersed in hot water infused with natural dye, then dunked into cooler water until the right hue is reached

Middle: A tie-dyed scarf, just out of the coloured water 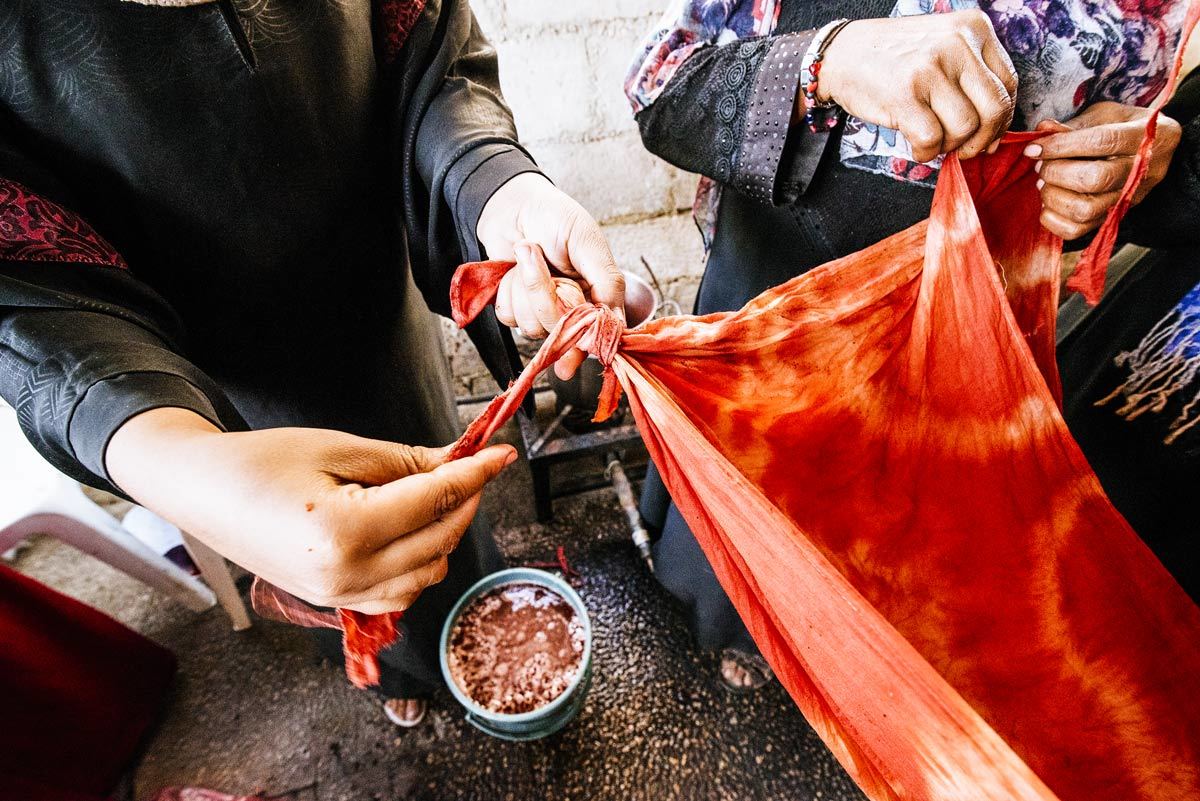 Back in the association’s workshop there isn’t a centimetre of wasted space. Sewing machines lie atop the long tables that dominate the main room, while one wall is reserved for a make-shift showroom, with a display packed with pillows, t-shirts, scarves and kaftans, all dyed in the earthy colours produced here and adorned with images mostly drawn and designed by the women.

‘We put chickens, geese, cats, a greenhouse for tomatoes, donkeys – all are designs inspired by our way of life here,’ says Mervat Al Hushoosh, another member of the association, adding that the women also collaborate with outside artists from Shams El Balad, a cafe in Amman. 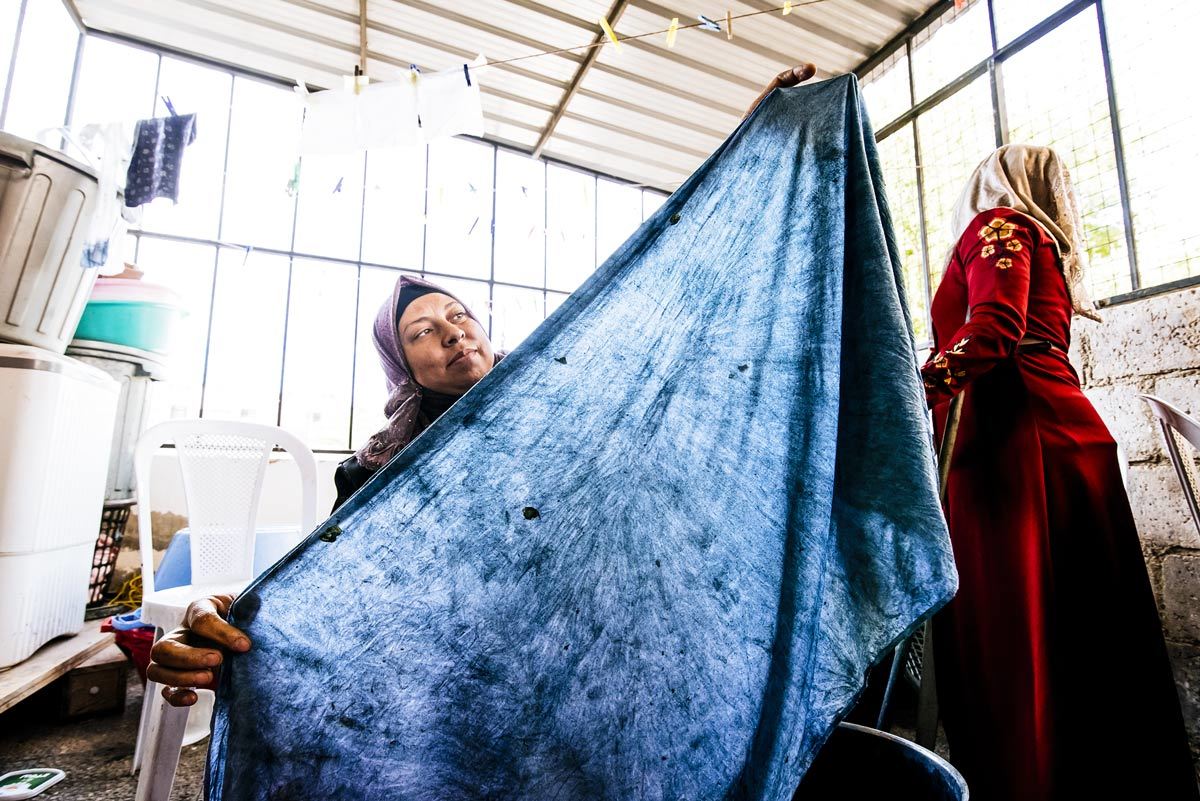 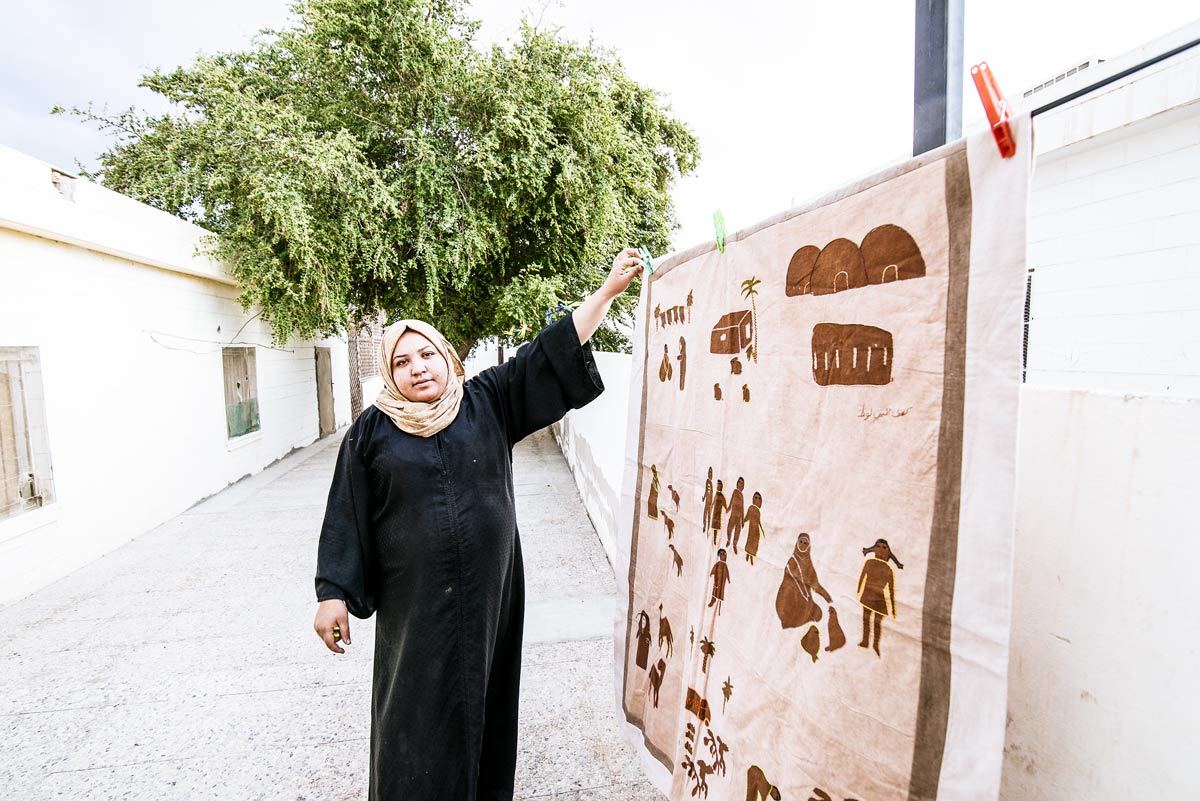 Top: Fatima Bazlamet, one of the artisans, with a scarf just moments after pulling it up from its final indigo wash

Bottom: Nisreen Ajalean, an artisan, with a blanket dyed with pomegranate and tea and patterns from the village of Ghor Al Safi

The back patio, meanwhile, is crowded with buckets of dyes and clotheslines. The insistence on using natural materials extends even here: the dyes are activated using bananas as a catalyst with no chemical additives. Al Hushoosh dunks a shirt in the pot, explaining that each batch of dye gives enough colour for seven to eight items. ‘Anything more and we won't have the same quality,’ she says. She turns to Shamalaat, whom she dubs ‘the Queen of the neely’ to look at the shirt.

‘She has a natural sense of the dye.’ Shamalaat gives it a critical eye. ‘I do it all by sight,’ she says, smiling at the compliment. ‘When you plant it and harvest it and process it with your own hands, don't you feel for it?’ 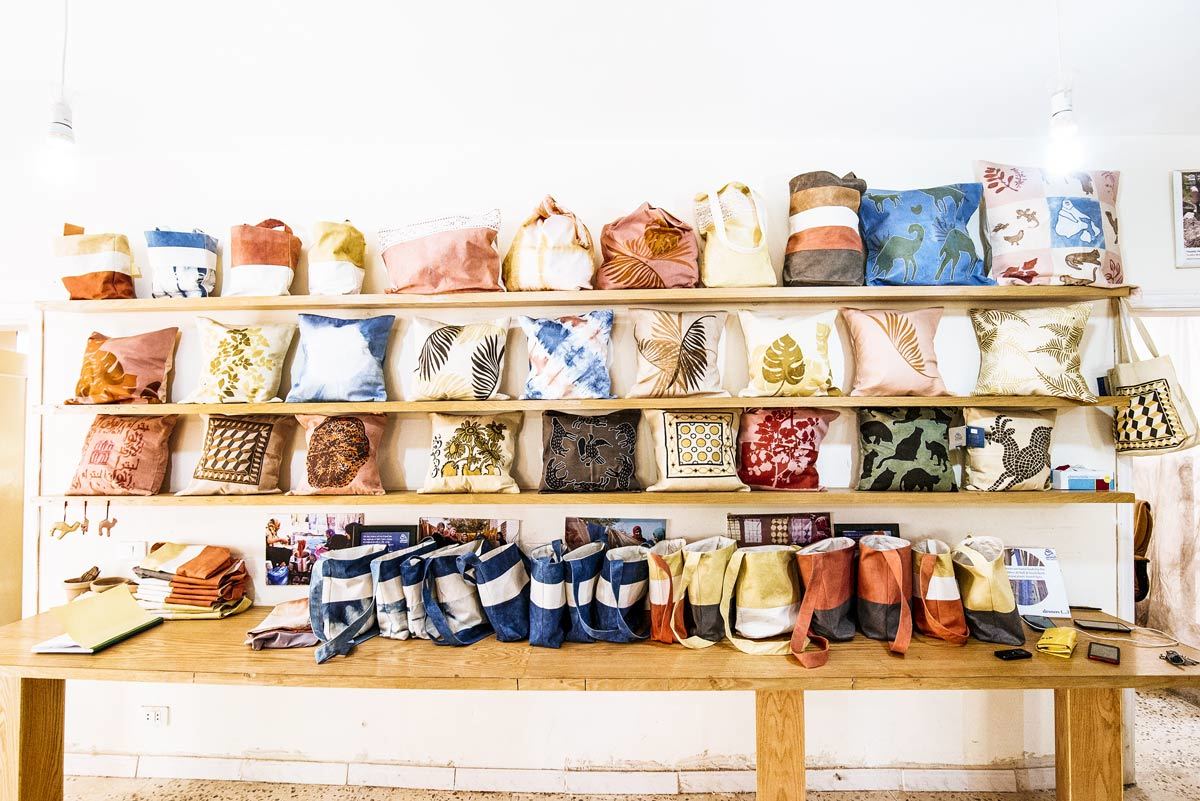 Clothes and accessories for sale at the association’s workshop