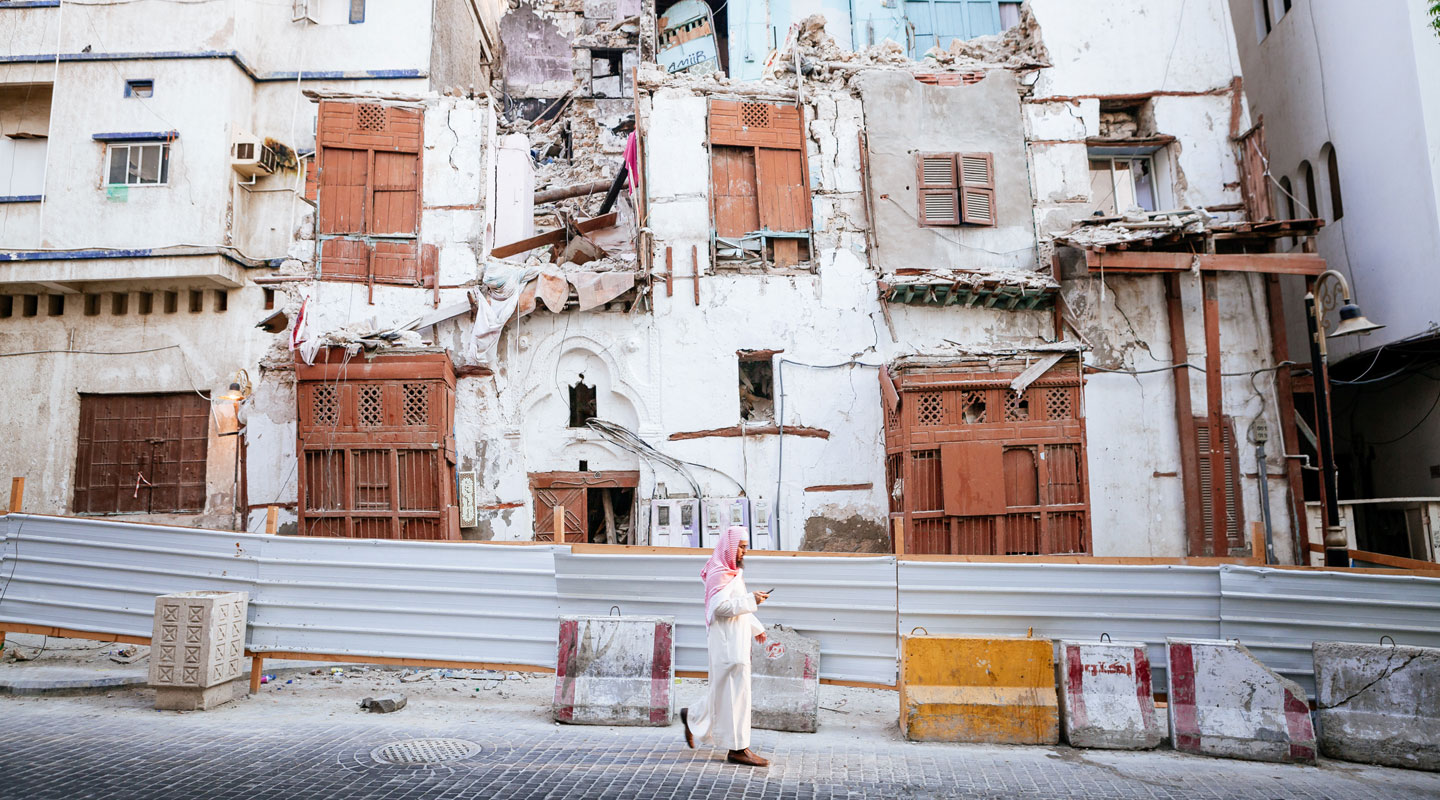 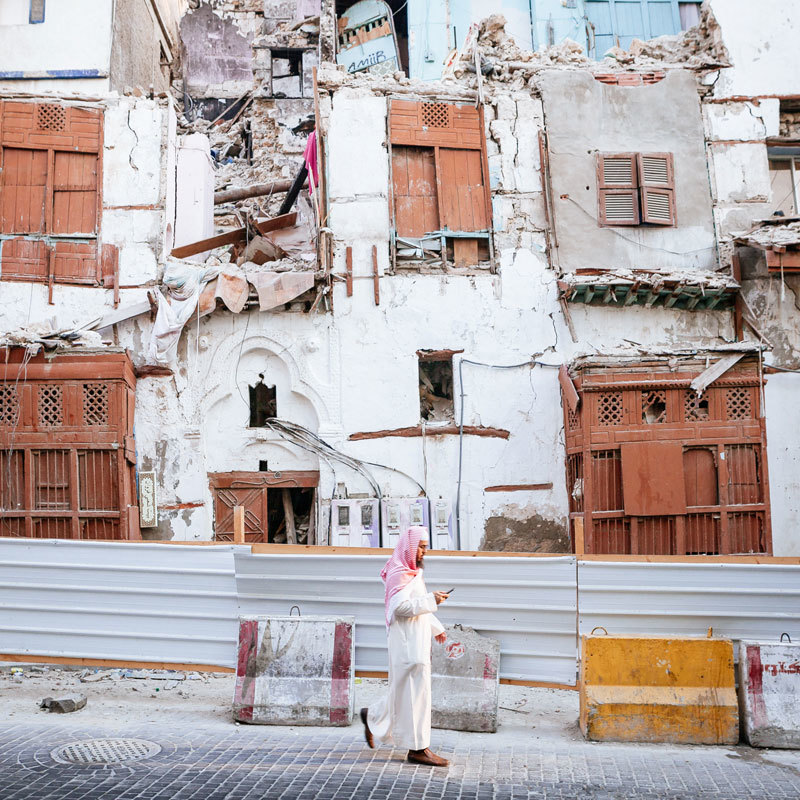 Sami Nawar, who’s leading a project to restore buildings in Jeddah’s Al Balad area, stands on the roof of Naseef House, a tall building right in the middle of the neighbourhood. ‘It will start soon, just listen,’ he says.

It is just before sunset and the weather, pressingly hot and humid all through the day, is becoming more agreeable. There is even a slight wind from the west, coming from Jeddah’s Red Sea coast. On the other side, to the east, is the age-old road leading to Mecca.

Suddenly, ‘it’ begins. The unmistakable sound that is heard five times a day across Saudi Arabia: the voices of muezzins, many at once, calling people to prayer. ‘You can hear the sound coming from all directions up here, and you can see everywhere,’ says Nawar. 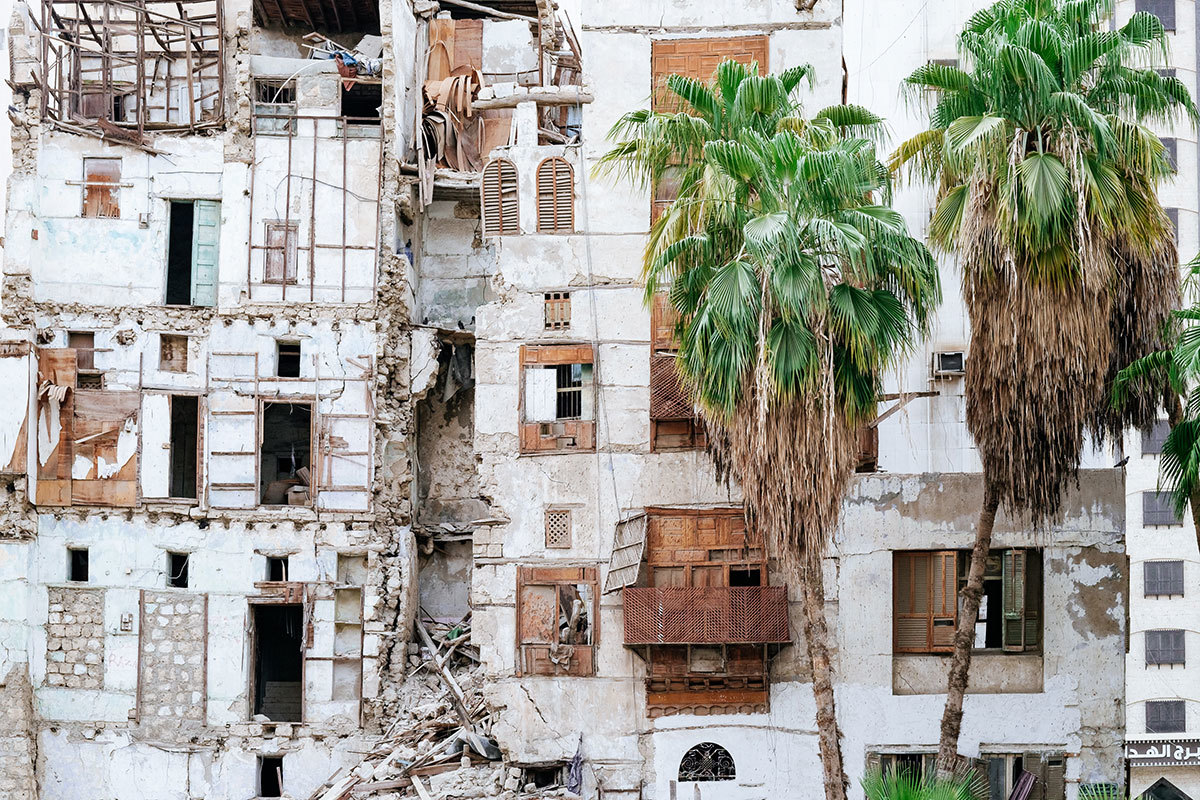 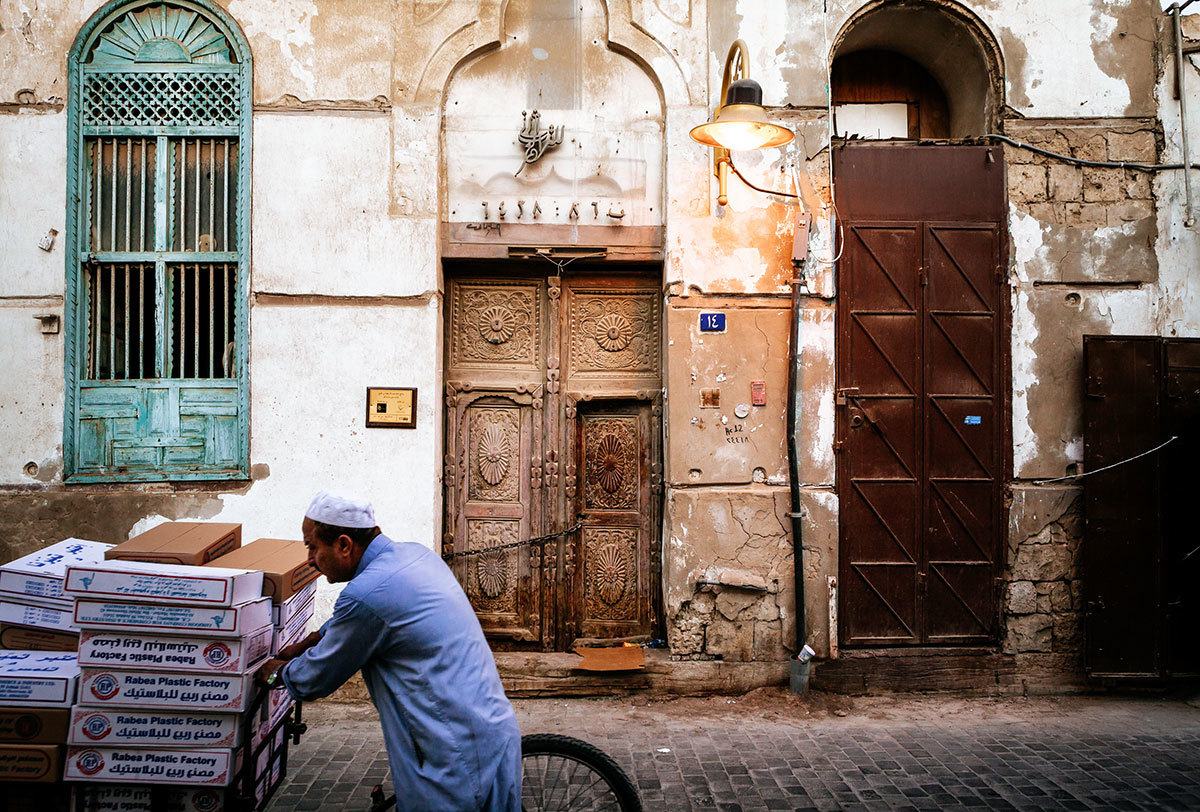 Top: The buildings were made from limestone, hand-hewn into blocks and laid in lime mortar before being reinforced by beams and decorated with wood

Bottom: Jeddah flourished after the Suez Canal was opened in 1869 and steamboats linking Europe with India and Asia passed by. This brought wealth to many merchants, who could decorate their houses.

Surrounding Naseef House on all sides are white buildings, several storeys high, with elaborate hand-carved wooden shutters and balconies. Some are painted bright green or blue, others are naturally brown. The houses were built between the 16th and early 20th centuries, during which Jeddah grew from a small fishing settlement to a fortified wall city, largely thanks to its position as an important port on the Indian Ocean trade route and the gateway to Mecca.

‘Al Balad is a unique place. This architecture cannot be found anywhere else. There are traditional high-rises in Shibam and Sanaa in Yemen also, but they are made from clay,’ says Nawar. Al Balad’s houses are made from coral limestone brought directly from the Red Sea, as there are no stone quarries in Jeddah’s surroundings. ‘In the past, we built with blocks and sand from the lagoon. We used coral and sometimes the more fragile sediment as well. That was used for ground floors.’

In 2014, UNESCO added Al Balad to its list of world heritage monuments, citing the neighbourhood as ‘an outstanding reflection of the Red Sea architectural tradition’. While the height of these traditional buildings is a unique feature, the most imaginative artisanship can be seen in the wooden details adorning them. Craftsmen built small secluded balconies and windows called rawasheen with mashrabiya elements. While large enough for residents to sit and look out on the street below, they also offered full privacy and were constructed in a way that would catch every passing wind. 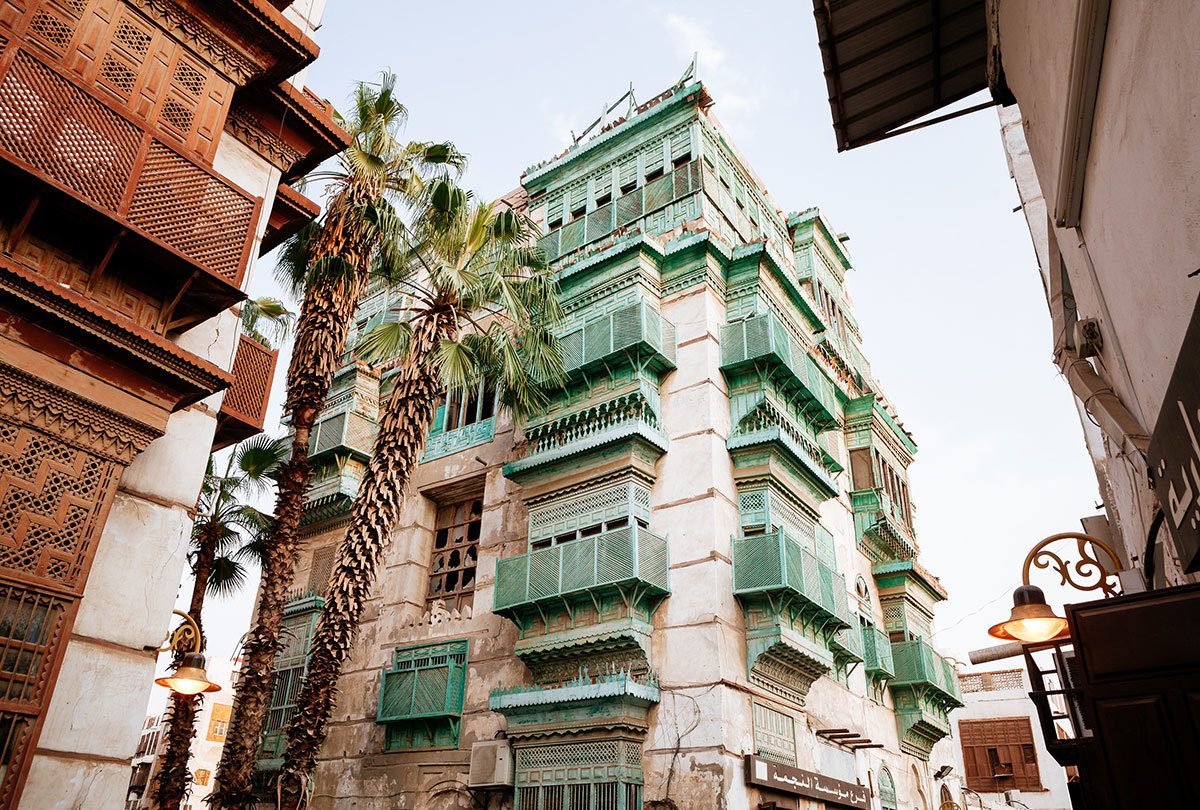 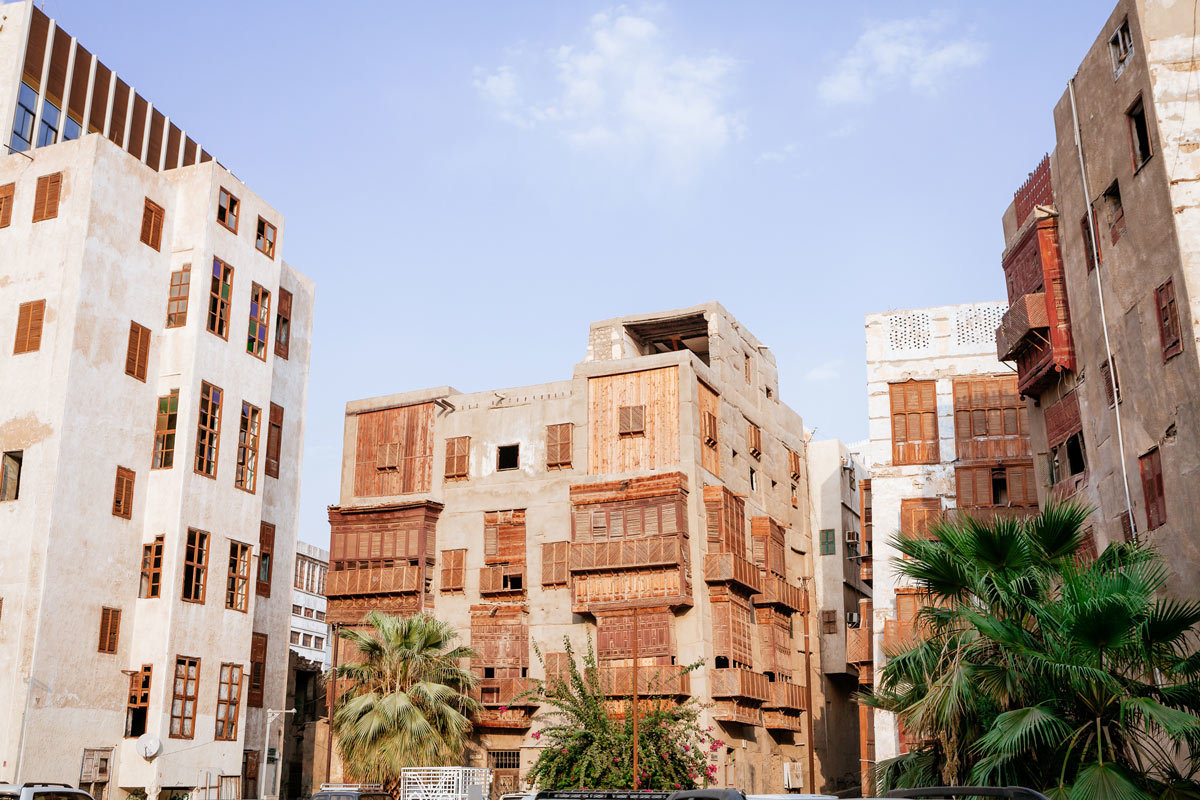 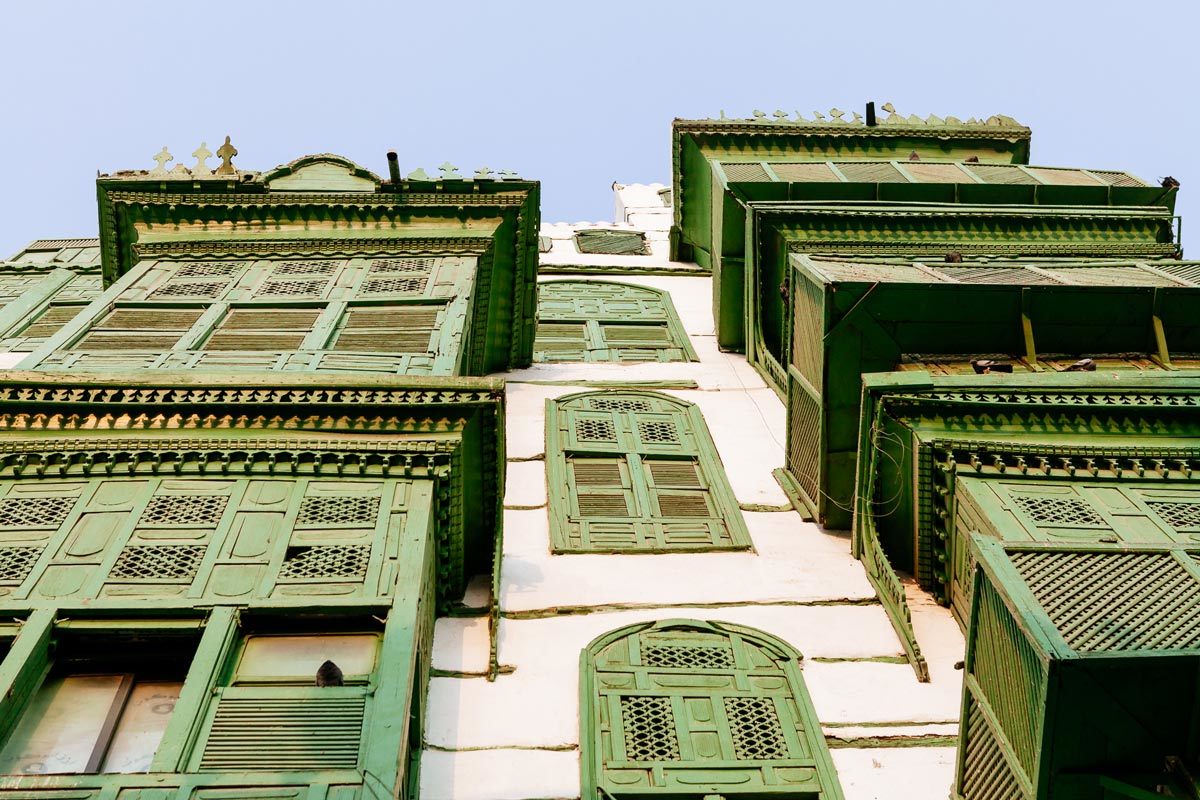 ‘We started to protect this heritage about 30 years ago. Now, we are trying to restore it,’ says Nawar. ‘We try to keep everything the way it was, but clean and maintain it. Any scratch, anything of time, we keep it. It’s not easy because the architecture is old and sand comes in. Sand is our biggest problem.’

In another part of Al Balad, where the once-walled-in city opened up via the northern gate Bab Jadid, residents have put up wooden sofas near the street. This is a markaz where people gather in the evenings, says Abdullah Lohas, who was born and has lived his entire life in Al Balad. ‘We meet here to talk about life, about what happens in the neighbourhood. And we settle issues if there are any.’ 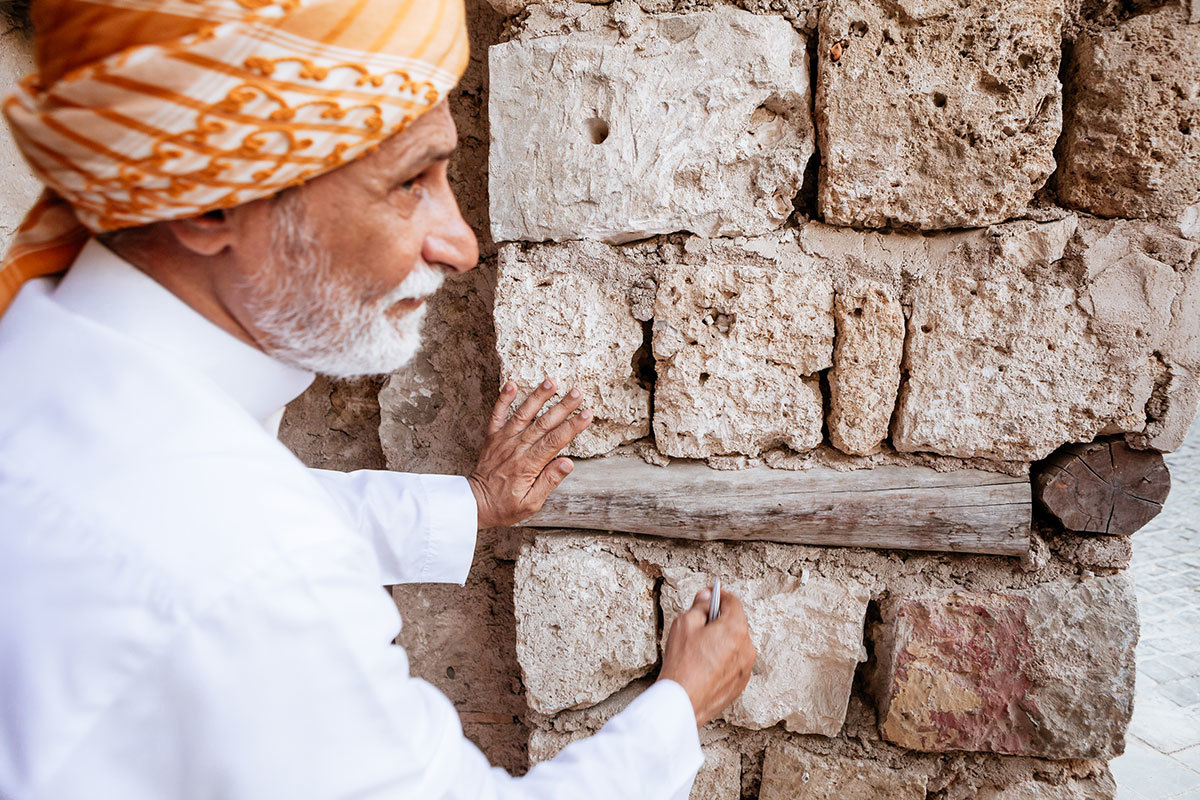 He gets up from the sofa where he was seated, walks across the street to one of the limestone buildings and points to heavy timber inserted in the wall. ‘You see these beams? This is how we built houses in the past. We inserted wooden joints every metre or so. When we need to repair the wall, we simply remove the broken piece and the beams keep the rest of the building intact.’

The wood used would be brought to Jeddah with ships passing through the port, arriving from Africa or India with teak, mahogany or sisam wood. ‘We only have coconut and palm trees here, and they are not good for building with,’ says Nawar. 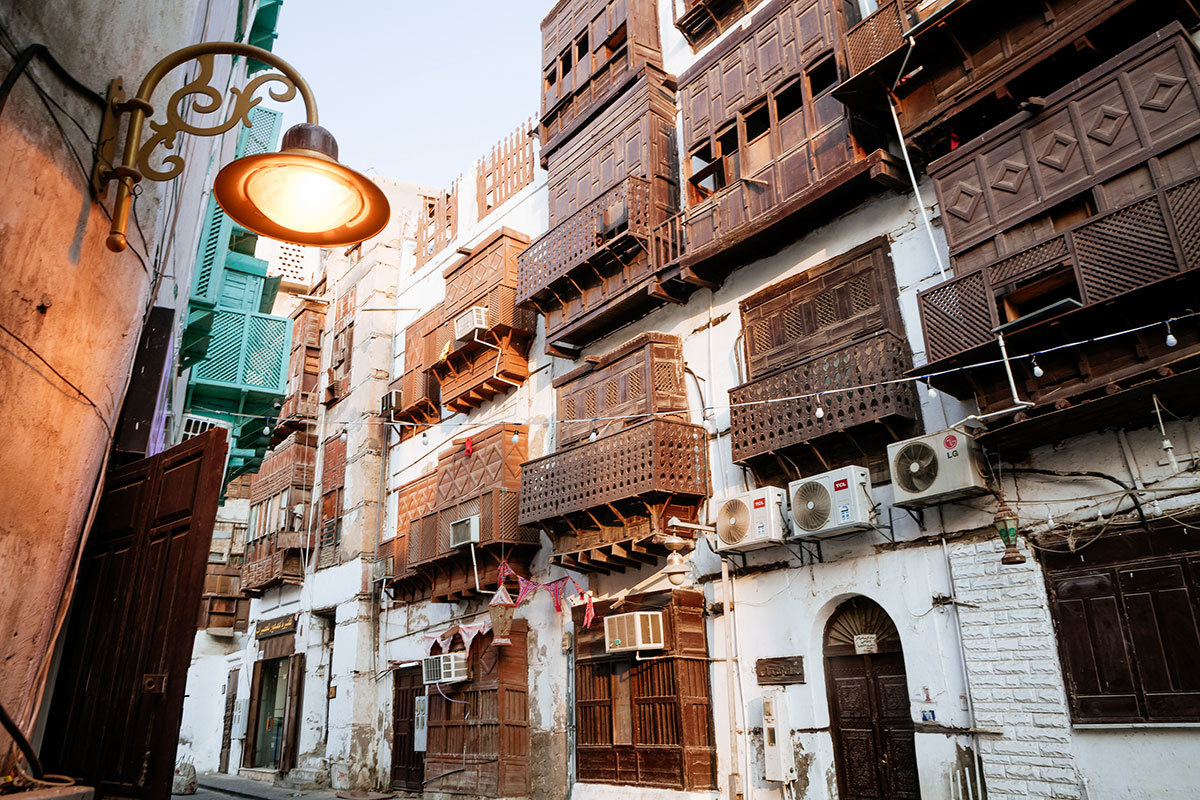 All across Al Balad, the houses have been built closely next to one another. This way, the shadow of one building would fall on the next, keeping them in the shade as much as possible during the day. Inside, living quarters were spread out on several storeys, and ground floors were kept for offices and commerce. Most families would also rent out rooms to pilgrims, who arrived through Jeddah’s port and stopped in Al Balad en route to Mecca.

Pilgrims today arrive by plane and not boat, but many still stop by Al Balad. During hajj or umra, the main thoroughfare, Souk Al Alawi, is crowded with visitors from across the Islamic world – Burmese, Indonesians, Moroccans, Indians and Sudanese. Signposts indicate the ‘Historical Hajj Route’, along which merchants attract buyers to their shops. The markets are still divided by trade: fruit and vegetables can be bought at one end of Al Balad, and both traditional and massproduced clothes at the other. There are incense and sweets for sale, and small sticks of miswak. Dried and fresh dates are sold per kilo; spices per hectogram.

‘Everyone used to come through Al Balad. We still love it here, despite the heat,’ says Said Rizki, a salesman selling textiles in bright colours. A Senegalese woman, Tiara Busso, stops by to look through the goods. 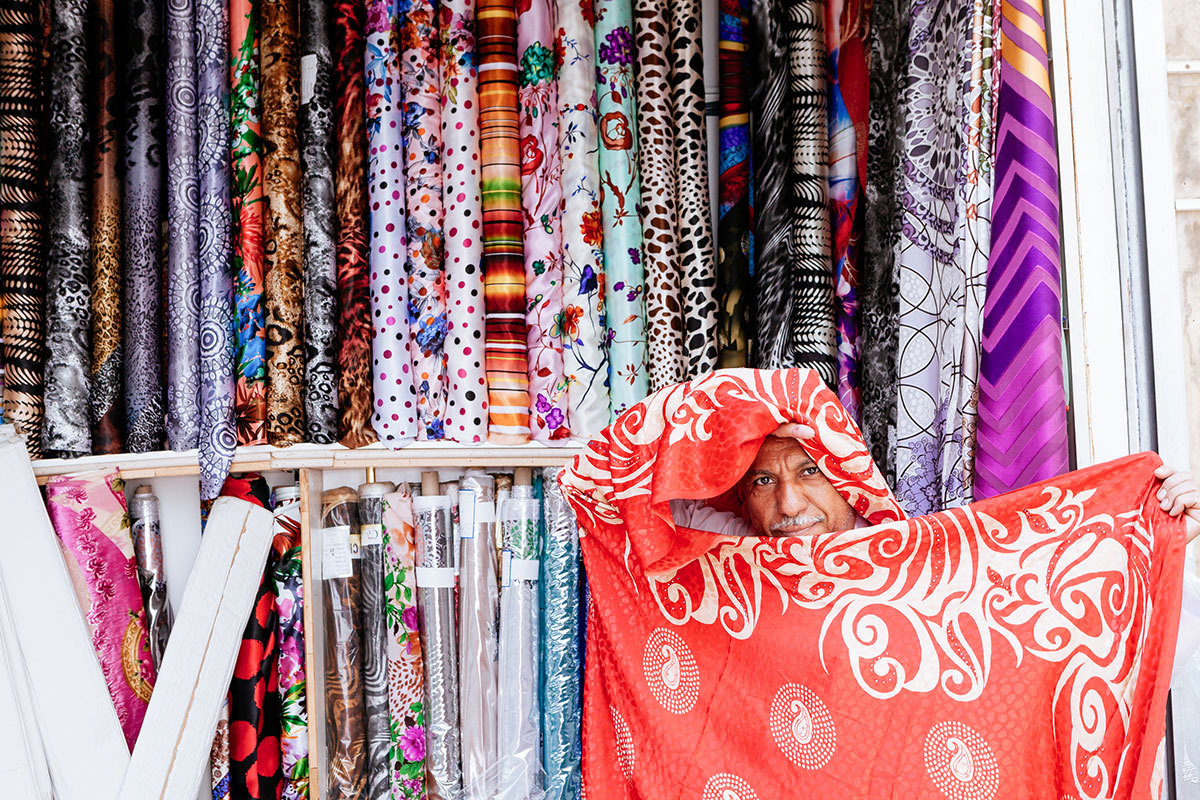 Said Rizki, a vendor of textiles and fabrics

‘I’ve lived here all my life. Al Balad is home for me, as for many other people from abroad, who have come to work here in Saudi Arabia,’ she says.

That includes people from nearby Yemen and Egypt, as well as India, Pakistan and Bangladesh. While Al Balad’s houses may be architecturally appealing, they are small and not adapted to the needs of families today. Many are in a poor condition as well, in need of much restoration. Therefore most Saudis have left the neighbourhood, giving way to migrant and settled workers, who often live together in large groups.

‘I’m a local of Al Balad, my family house is 300 years old and I lived here until I was 11. Sure, we have our problems here. We have fires, and some houses are in very bad condition,’ says Nawar. One such house is on a square near the date market, surrounded by shops selling sweets and bottles of soap and shampoo. The façade is Al Balad white, and has decorative wooden shutters. On all sides of the building is scaffolding, and men dressed in shirts and dusty pants are busy carrying loads of timber.

‘We are replacing some of the old shutters, which are falling apart,’ one of them says. ‘We renovate the buildings continuously – that’s needed in this climate.’ 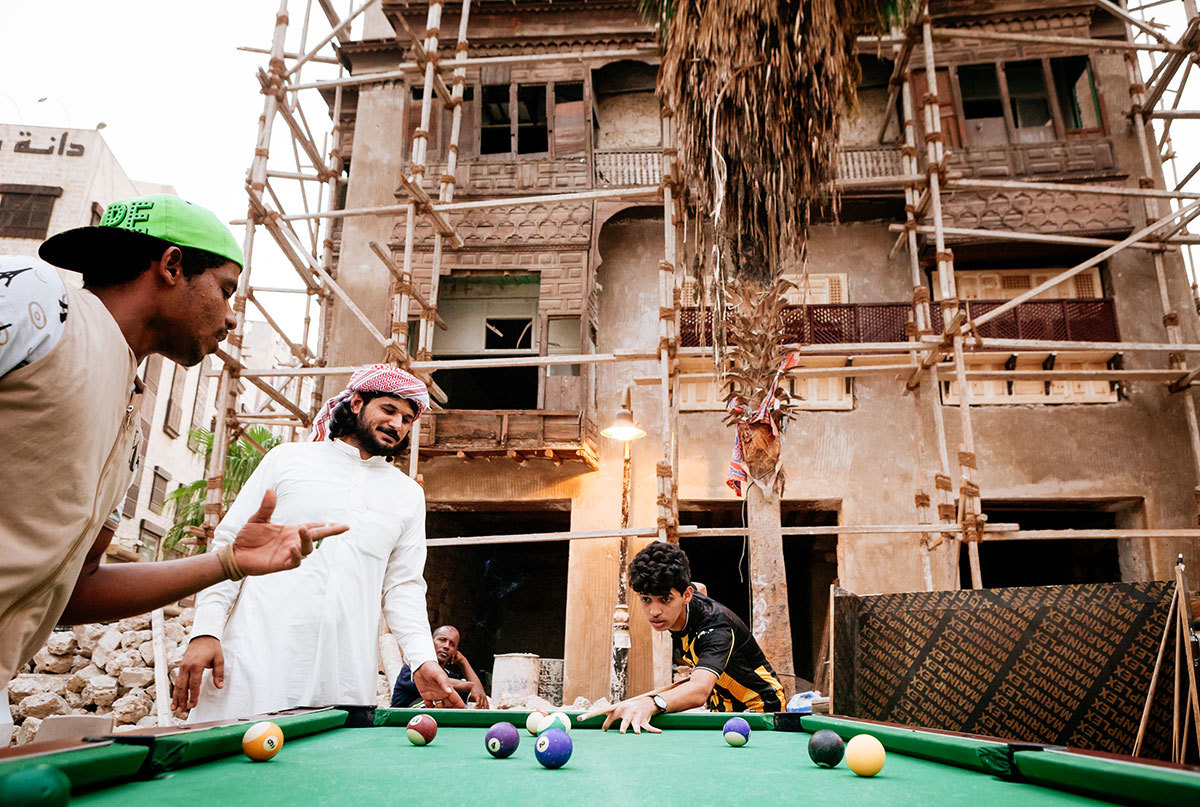 Al Balad has 600 protected buildings which cannot be taken down, at least not according to the law. But saving them was not an obvious choice. Jeddah was fortunate to have a mayor from 1972, Mohammad Said Farsi, who had a profound belief in the value of arts and heritage and would not let old Jeddah be demolished – this at a time when the city was experiencing some of the fastest growth in the world.

‘That means we have many buildings left. We give permits now to restore houses, and to shops or businesses working in heritage and traditions,’ says Nawar. 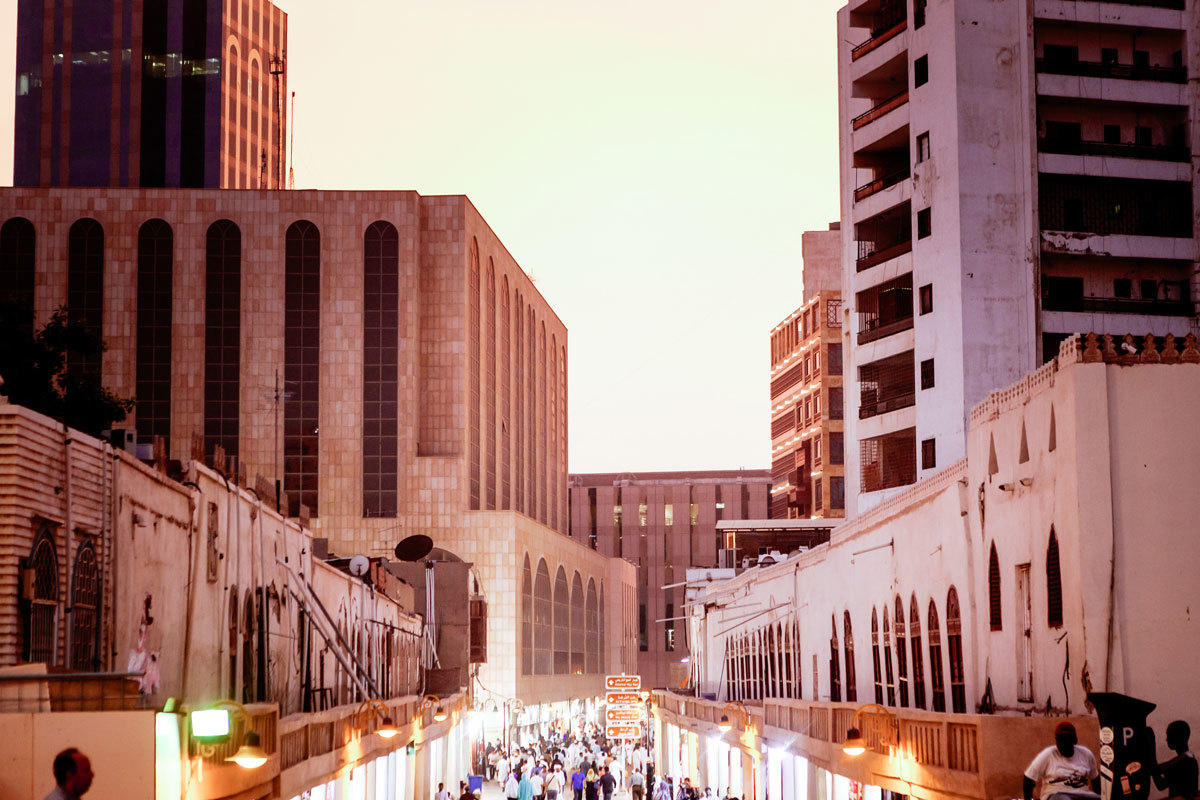 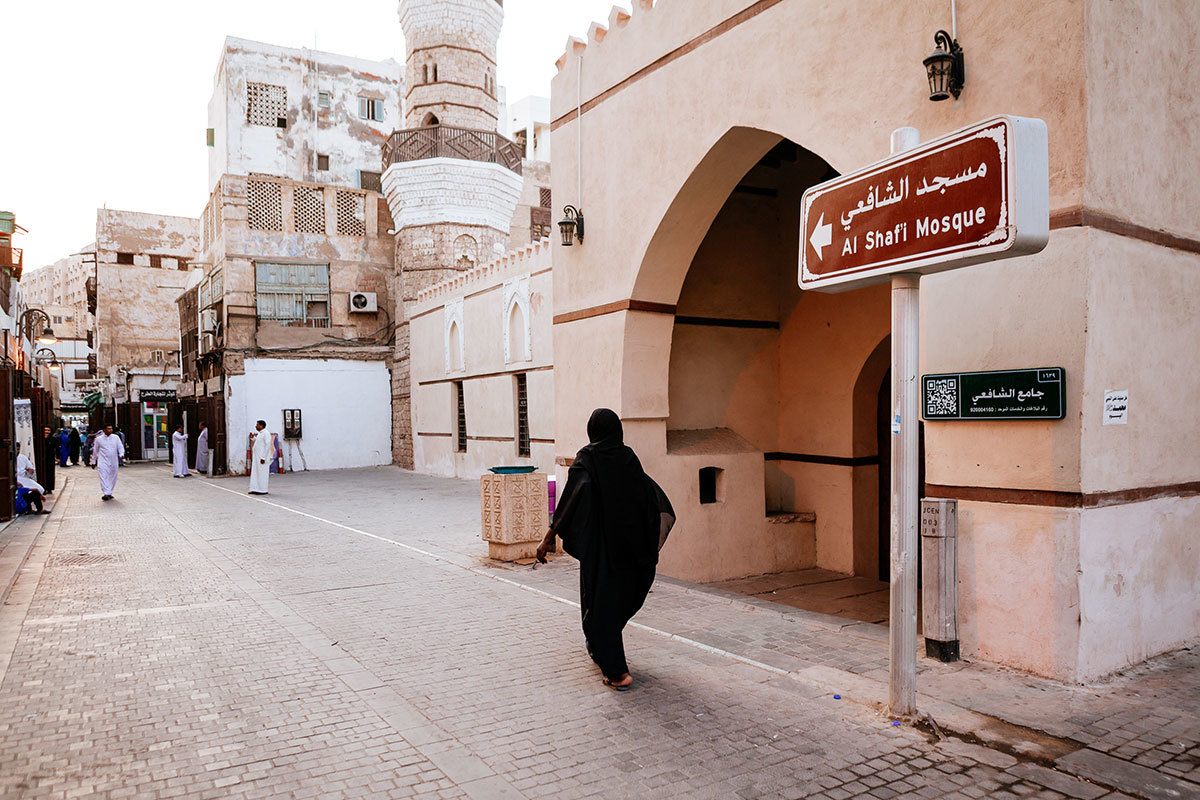 Bottom: A quiet early evening at the entrance of the market area

Still, the situation of many Al Balad’s buildings remains dire. Their interiors are neglected, their exteriors in need of careful restoration. Those that have been restored – the traditional Beit Matbouli house in several floors, the small and friendly Magad café, or the bookshop and library thoughtfully named ‘Jeddah Our Days of Bliss’ – are good examples of what could be done to other buildings as well.

The proudest and most carefully restored of all buildings in Al Balad though, is the one on which Nawar is standing. From the small patio downstairs to the open rooftop area, Naseef House has been entirely renovated. It was built at the end of the 1800s, first to house the wealthy merchant family Naseef and then receive important visitors to Jeddah – not least after 1925, when king Abdulaziz Ibn Saud used it as a royal residence. Inside, the ceilings are high and reception rooms grandiose, and in the middle of the house, a wide wooden staircase runs all the way up.

‘The stairs were built like this for horses or camels to bring foodstuff all the way to the kitchen on top. It is Ottoman influenced – we would not build stairs like that locally,’ says Nawar. 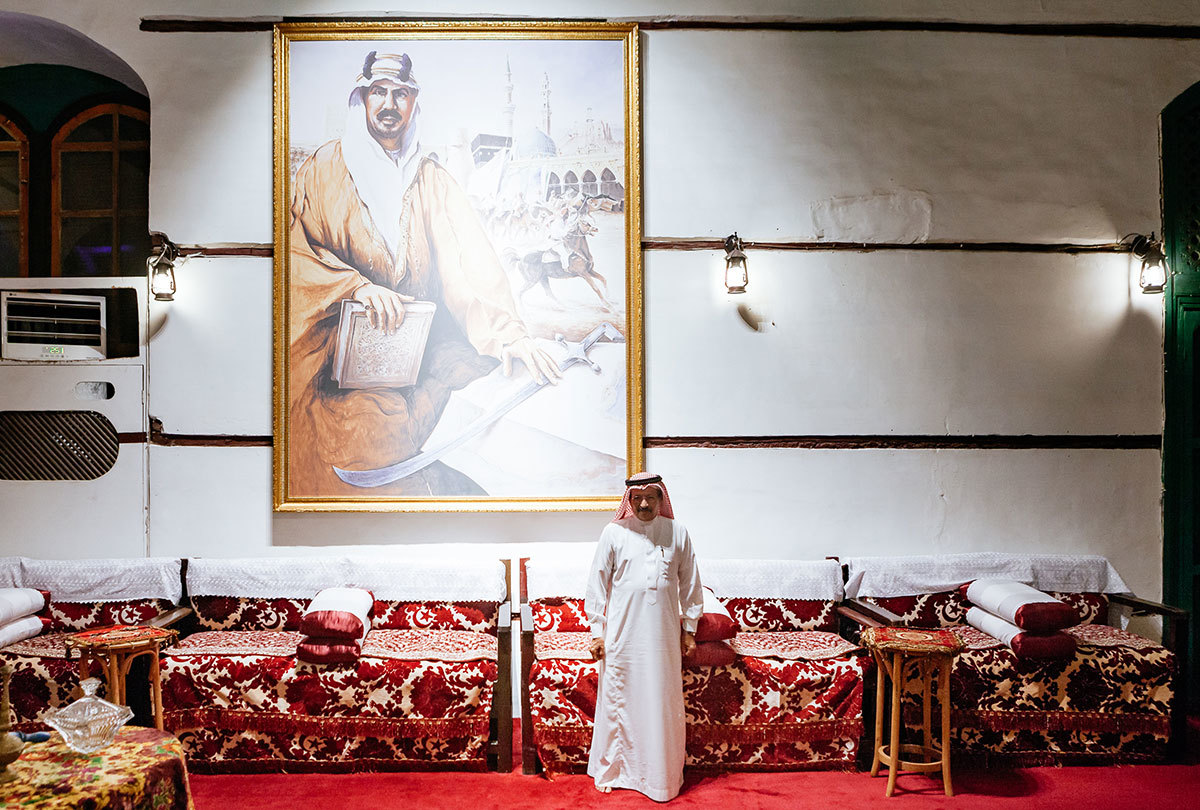 Naseef House was for a long while the tallest building in Jeddah – and remained so until the 1970s. It also boasted the city’s only tree outside, and letters sent to the Naseef family would be marked ‘the house by the tree’. Today, the house serves both as a cultural space and monument to Al Balad’s prominence throughout history – and a reminder of the potential of architectural restoration.

Nawar, leaving the cool breeze on the roof and walking down the wide staircase, thinks about what Al Balad may become in the future. ‘It’s easy, it’s like any human. If someone gets hurt and starts bleeding and nobody cares, that person will die. But as long as you remedy any sickness, it will survive.’ 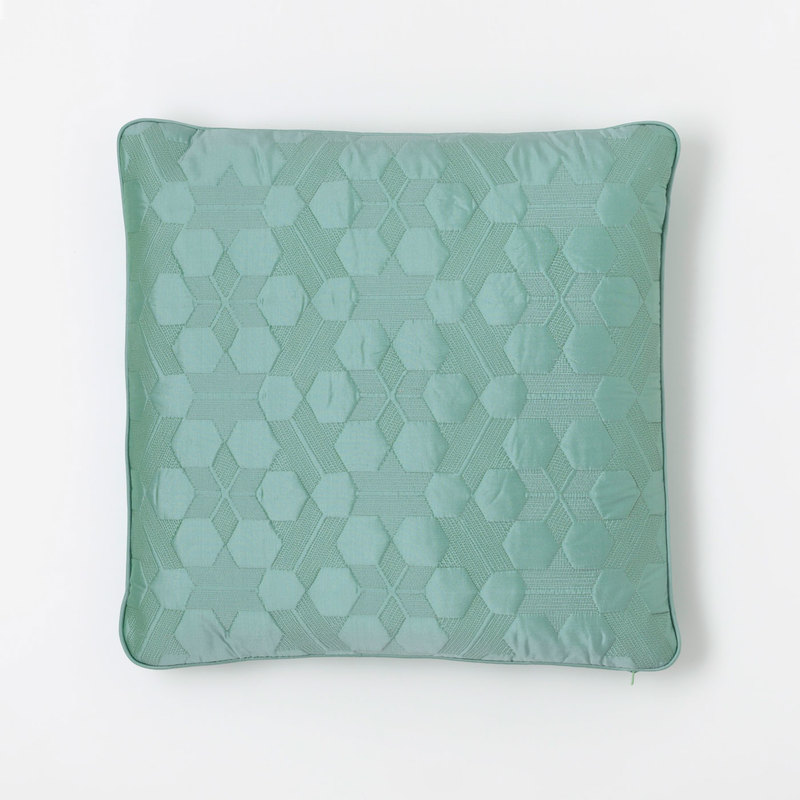 Our artisan partners at Turquoise Mountain took inspiration from the Al Balad Neighbourhood when creating the Silk Cushions range.