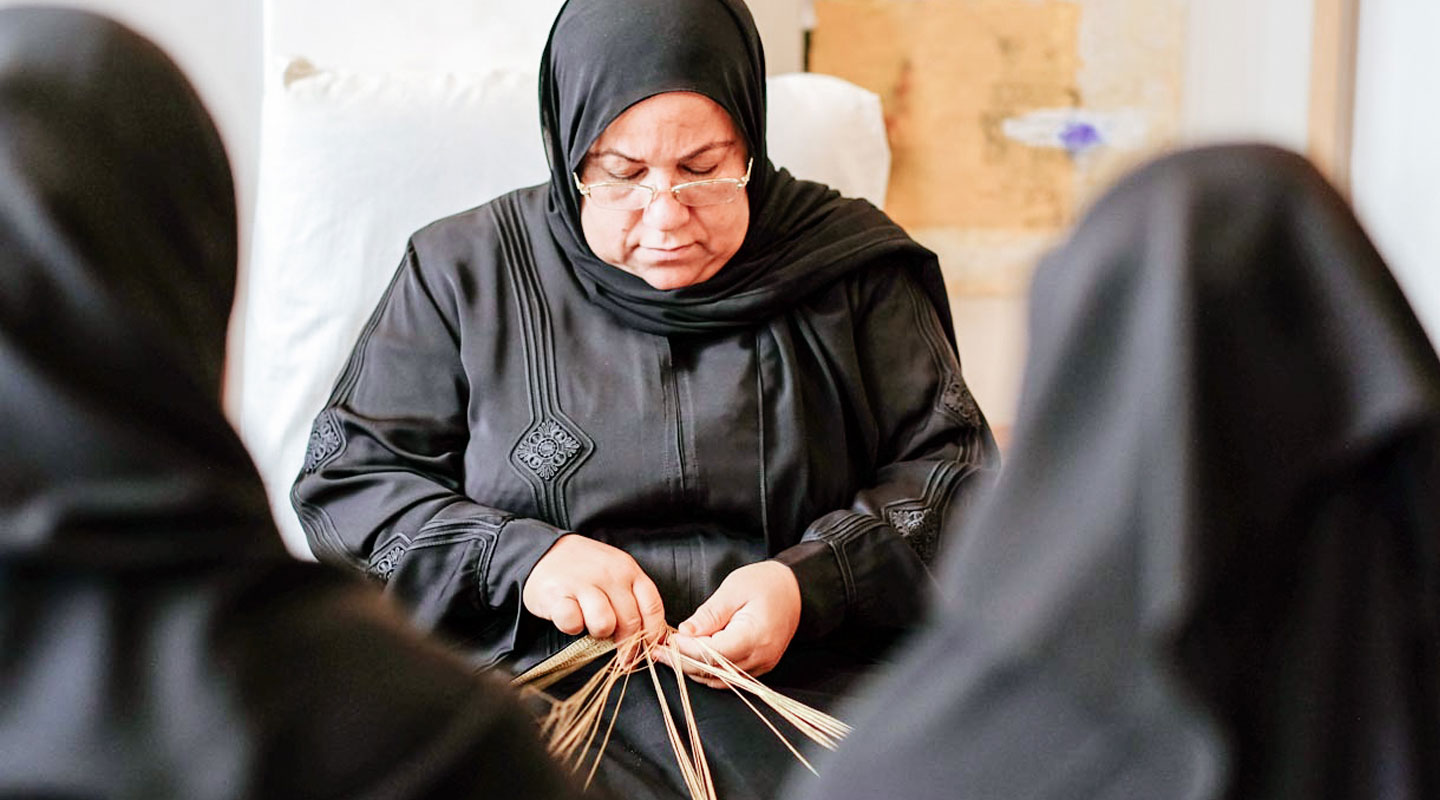 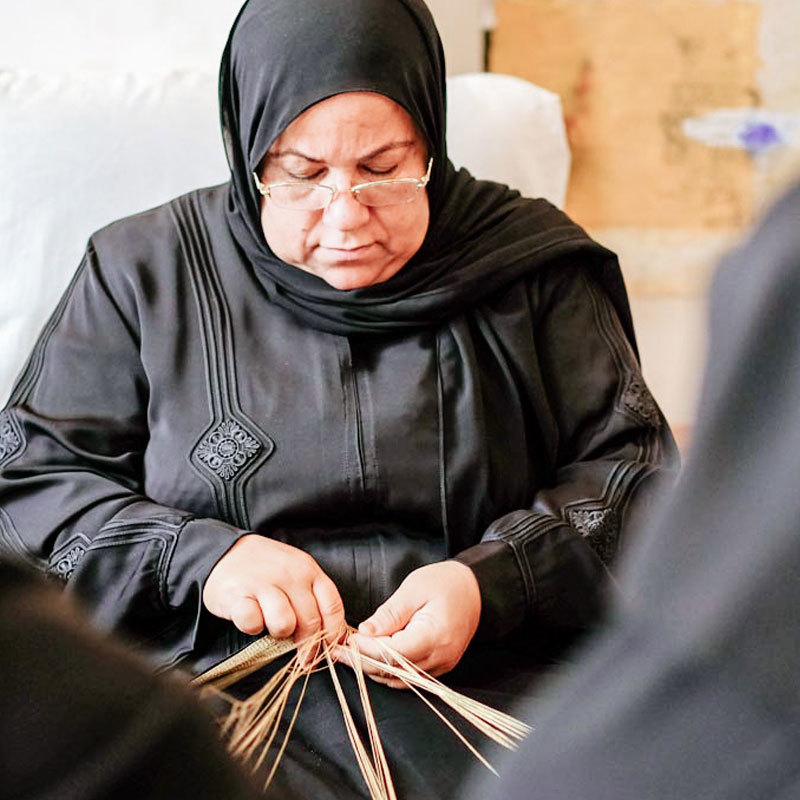 In Bahrain, an ancient collaborative embroidery tradition now lies in the hands of only five women.

The way to Kurar House, or Beit Al Kurar, in Bahrain’s third largest city Muharraq leads past whitewashed walls and beautiful, traditional doors. Just inside is an open courtyard with a workshop, a gallery and an outdoor seating area. A sign featuring decorative calligraphy hangs at the entrance leading into the workshop, where only five remaining artisans work to keep the embroidery craft kurar alive.

Three women, Nayla Shuwaiter, Haya Dhami and Khulood Rashid, sit at one end of the room. They have bundles of zari, the thread used for making the craft, wrapped around their fingers. Collectively, they create intricate embroidery by letting their hands and the thread overlap one another. On the opposite end sits Mona Shuwaiter, the qataba or seamstress of the group. She holds a needle in one hand and uses the other to pull the woven threads to her side. 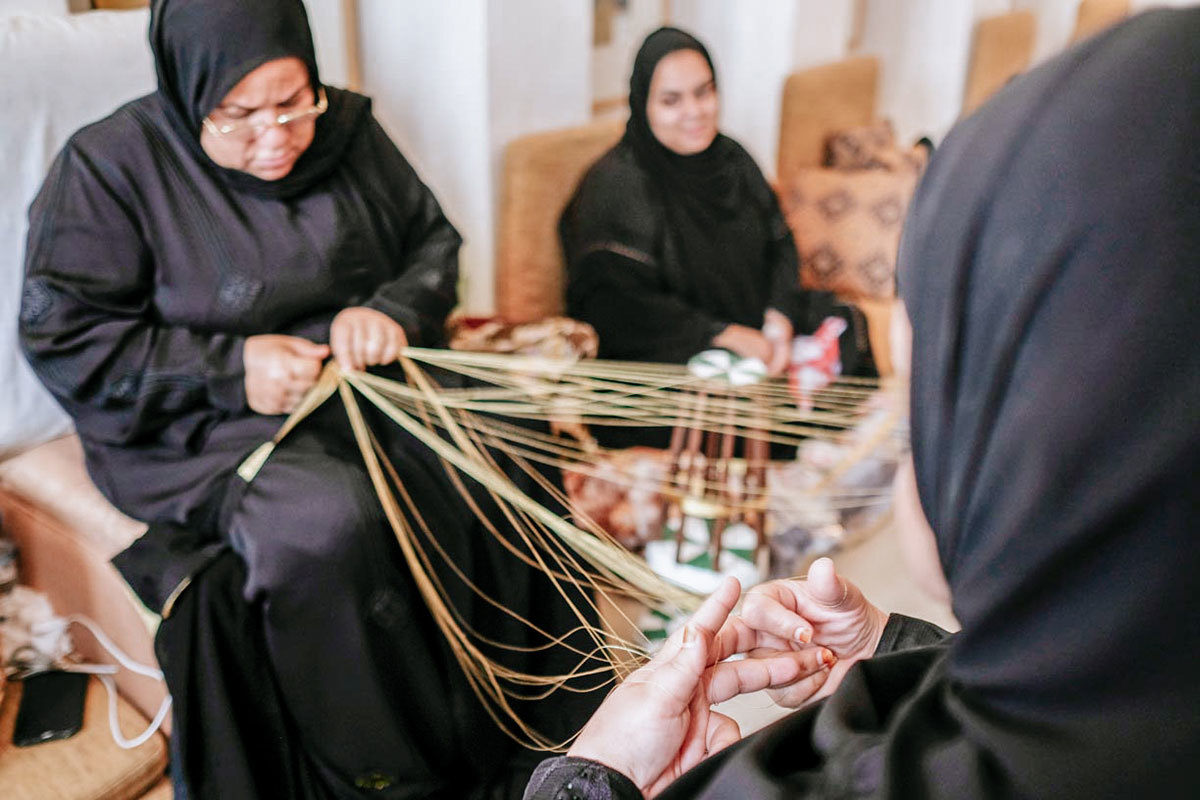 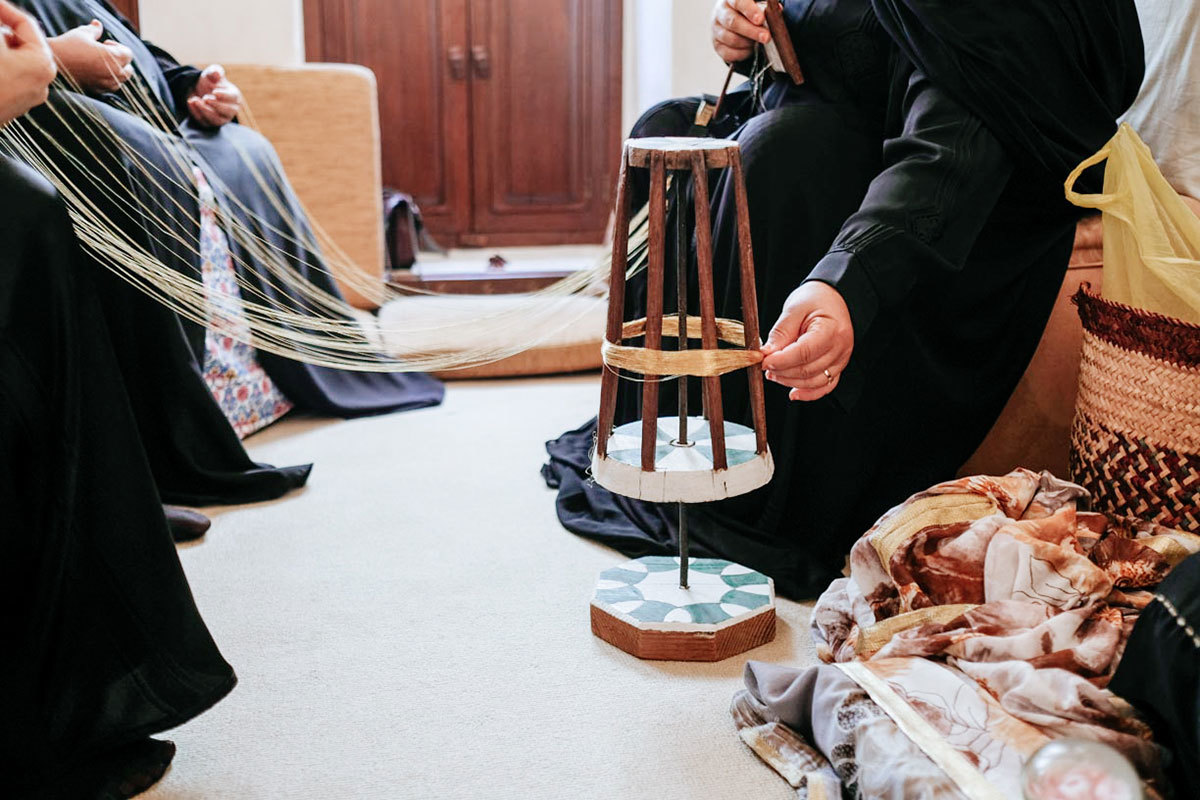 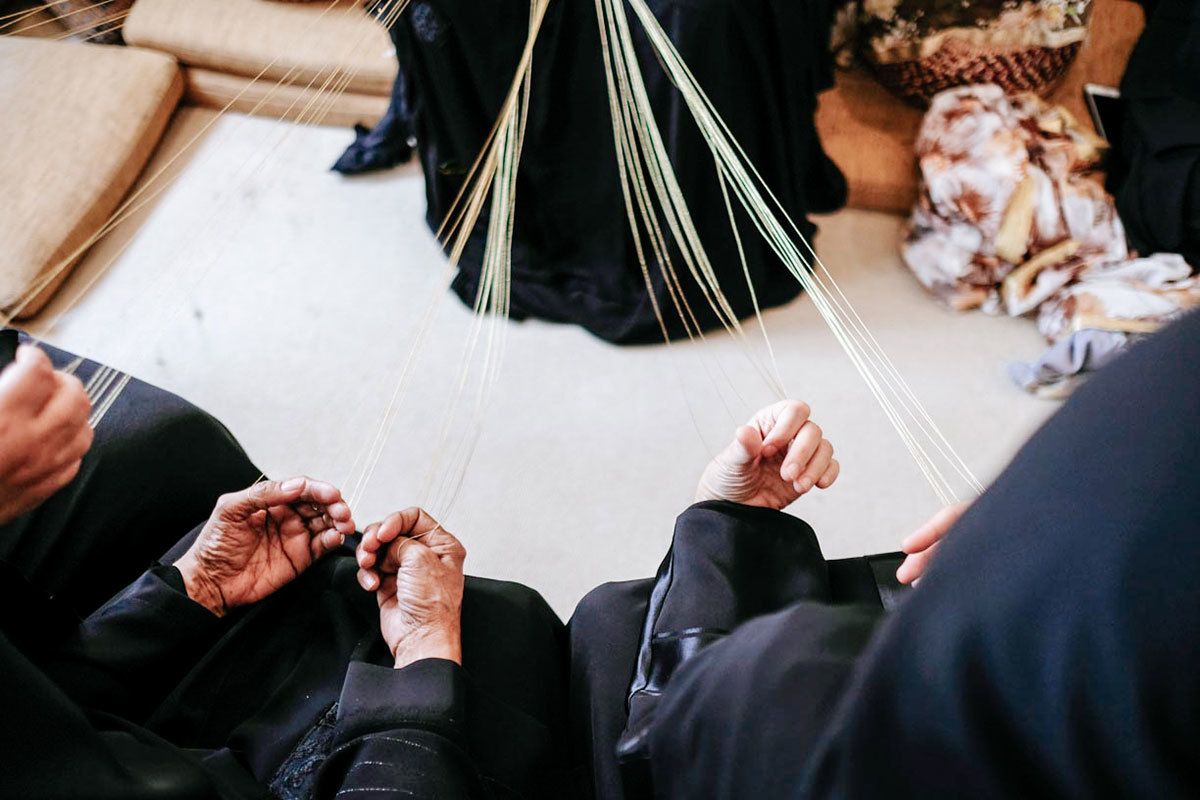 The fine zari thread, which comes in gold and silver, is believed to date back to the Moghul era. It’s now imported to Bahrain mainly from Kerala in southern India, but the one from Lyon in France is said to be of the highest quality. The embroiderers use it to create a long strip of embroidered thread along the edges of garments.

‘There are no designs when it comes to kurar. It’s always the same long strip that is being sewn, but it requires a lot of effort to complete,’ says Rashid as she transfers the zari from one hand to the other.

Back when kurar was done in the homes of craftswomen, creating the decoration for a thob, a woman’s traditional dress, used to take merely three days. The artisans were then able to dedicate mornings and evenings to the trade. Nowadays, the same thob is completed over the course of three weeks, as the artisans are only able to meet three mornings a week.

‘Kurar used to be a social activity in the village. You would find multiple homes working together to create thobs for women,’ says Rashid. 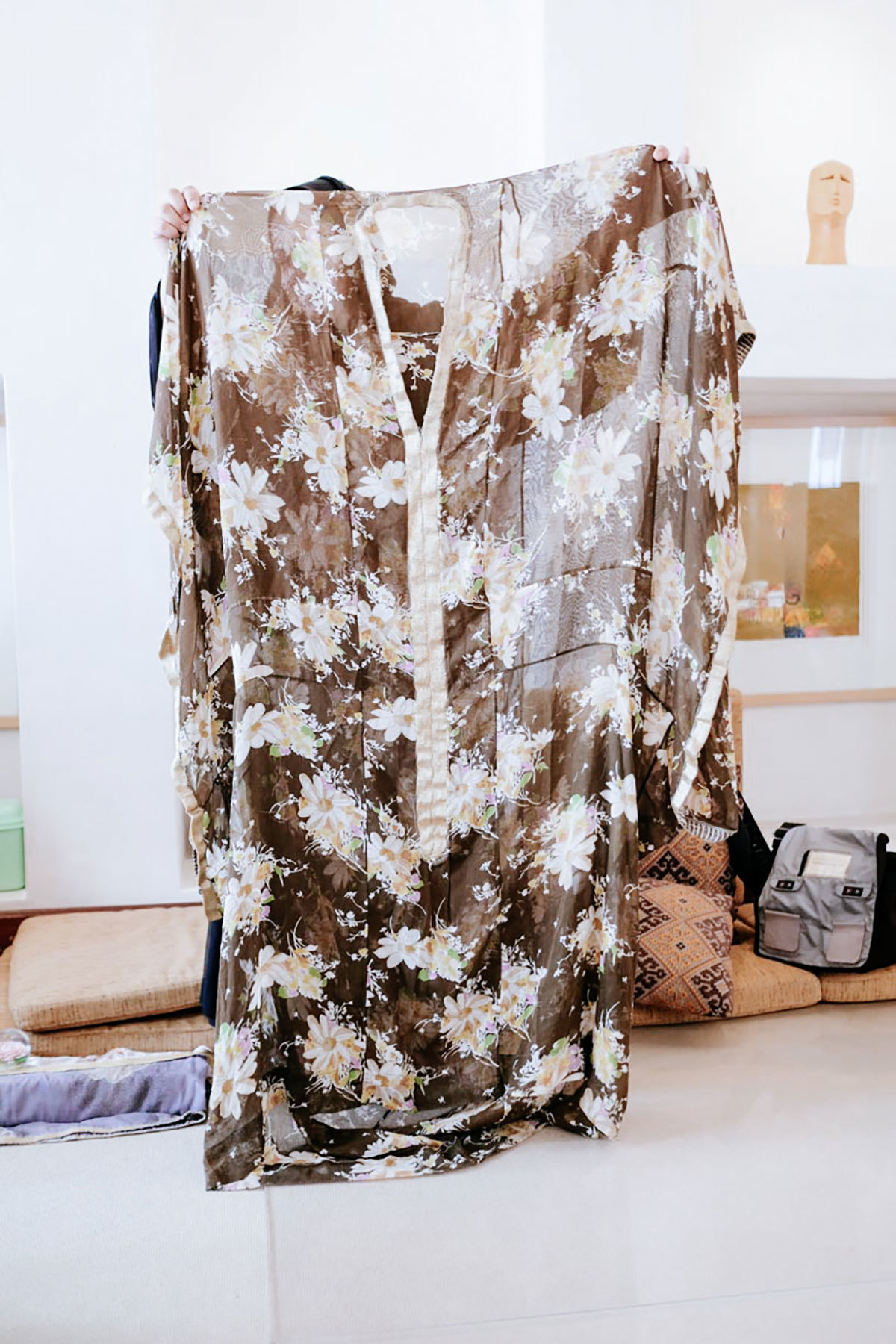 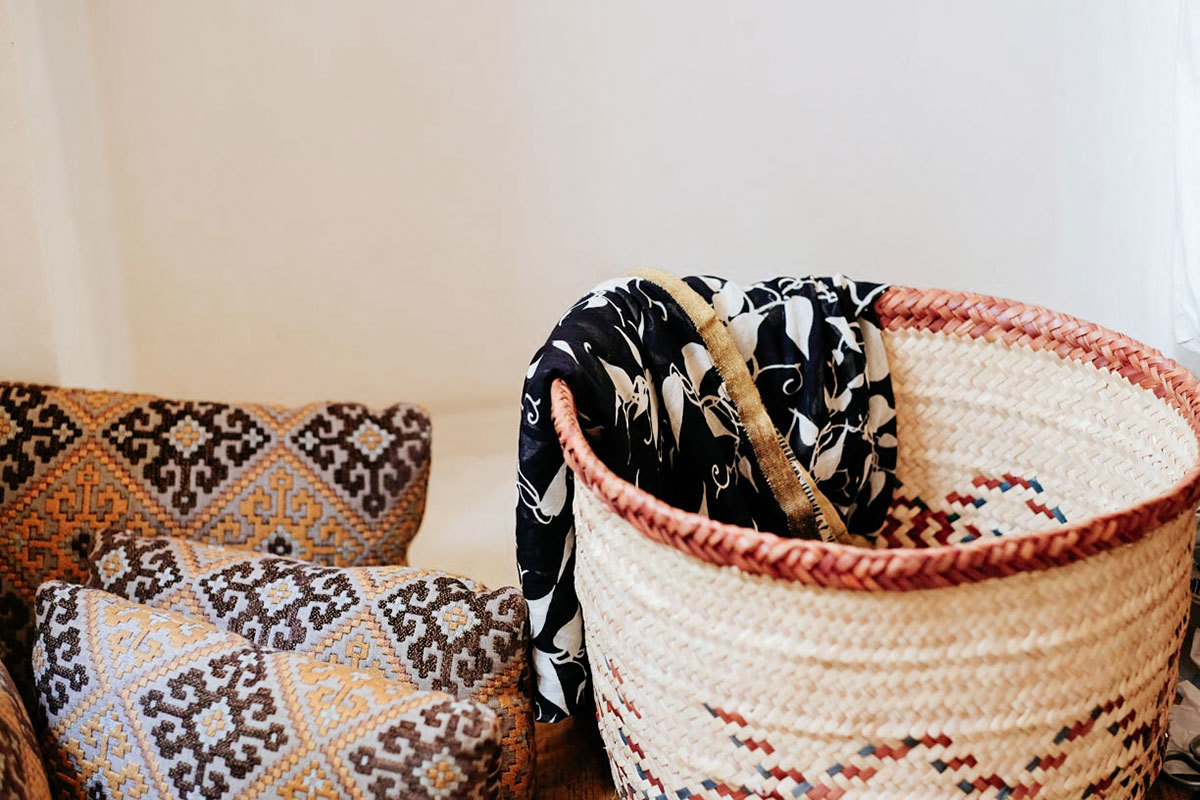 The thread she holds in her hand gets shorter, so she gets up and moves her chair a little closer to Shuwaiter, the qataba. The cycle continues like that until the entire thread has been used.

‘Traditionally, kurar used to be worn for occasions like weddings and religious ceremonies. Any interest from the younger generation now mainly peaks during gergaoun, a celebration during the holy month of Ramadan. Otherwise, younger ladies tend to buy the machine-made traditional dresses that are less costly,’ explains Shuwaiter.

Kurar is completed in three main stages. The first is kasr al zari, or ‘breaking the thread’, when a roll of thread is placed over two different-sized twirlers, the tools used to break the thread. This process requires two days to complete and has the purpose to combine four threads into one, making it sturdier and easier to work with.

The second stage is the interweaving process, the tadakhol. This is the elegant and graceful transfer of the thread from finger to finger. Once a person has moved the thread from one hand to the other, the artisans overlap their arms while the qataba collects the entire kurar and folds it together, to finally be sewn onto the fabric. 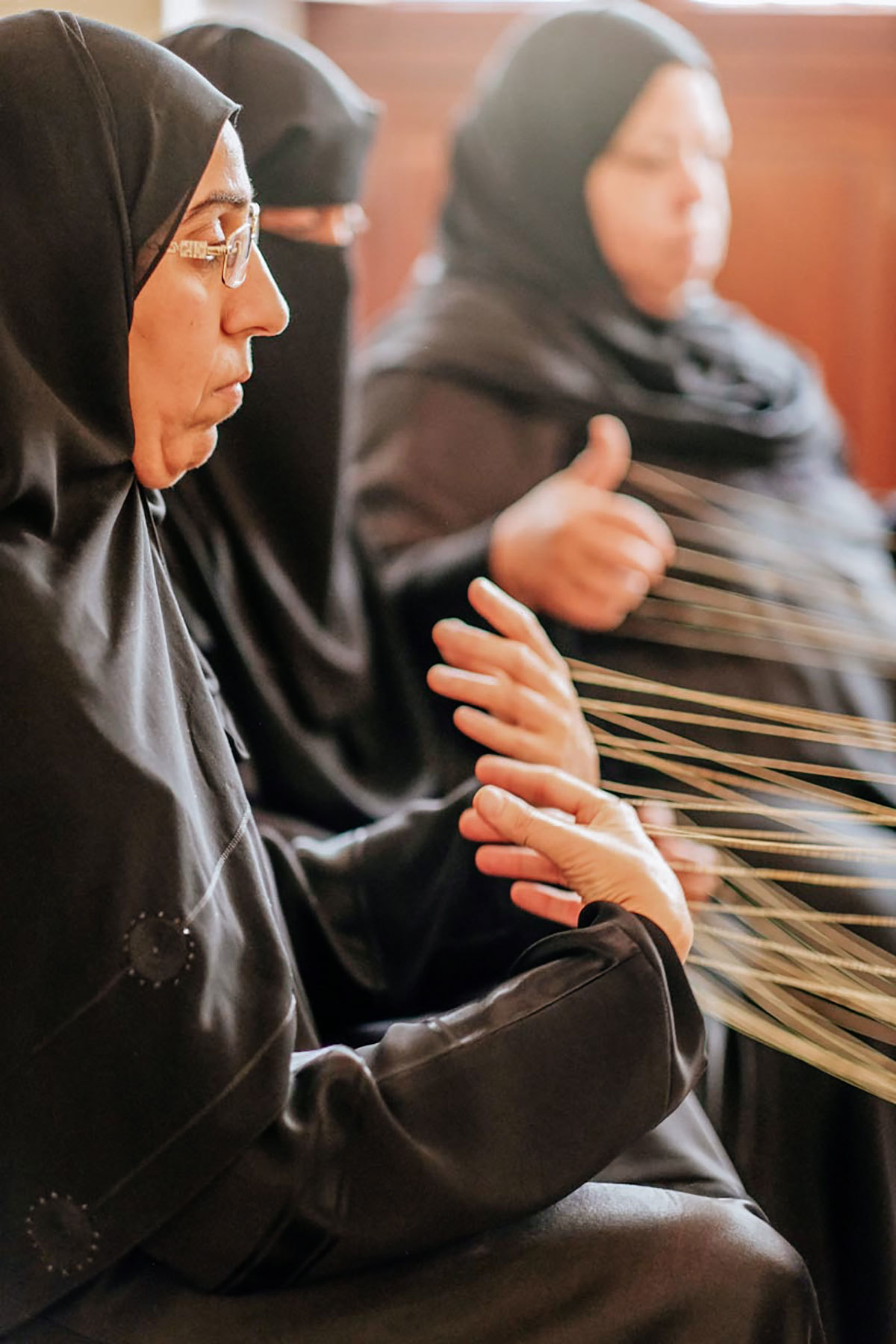 Once the kurar has been completed, it is burnished by the dagagah, the fifth artisan in the group and the one responsible for this third and final stage of the process. Badria Al Thawadi, the youngest of the five, does it by holding a see-through rock in one hand and the garment in the other, gently beating the kurar to soften and smoothen its surface. As she continues to work with the thread, Dhami starts to recite a prayer.

‘My mother tried to teach university students the craft, but after three days they were still unable to get the thread through the needle,’ she says.

Shuwaiter agrees, adding that, ‘Learning the skill requires much more than merely copying movements. There is an art to it that not everyone can master.’

But Rashid thinks that the craft can be acquired, when the will and commitment is there.

‘If you’re committed to learning it, you can do so in a week. It’s only a matter of getting used to the hand movements. Once you learn them, you can master the craft,’ she says. 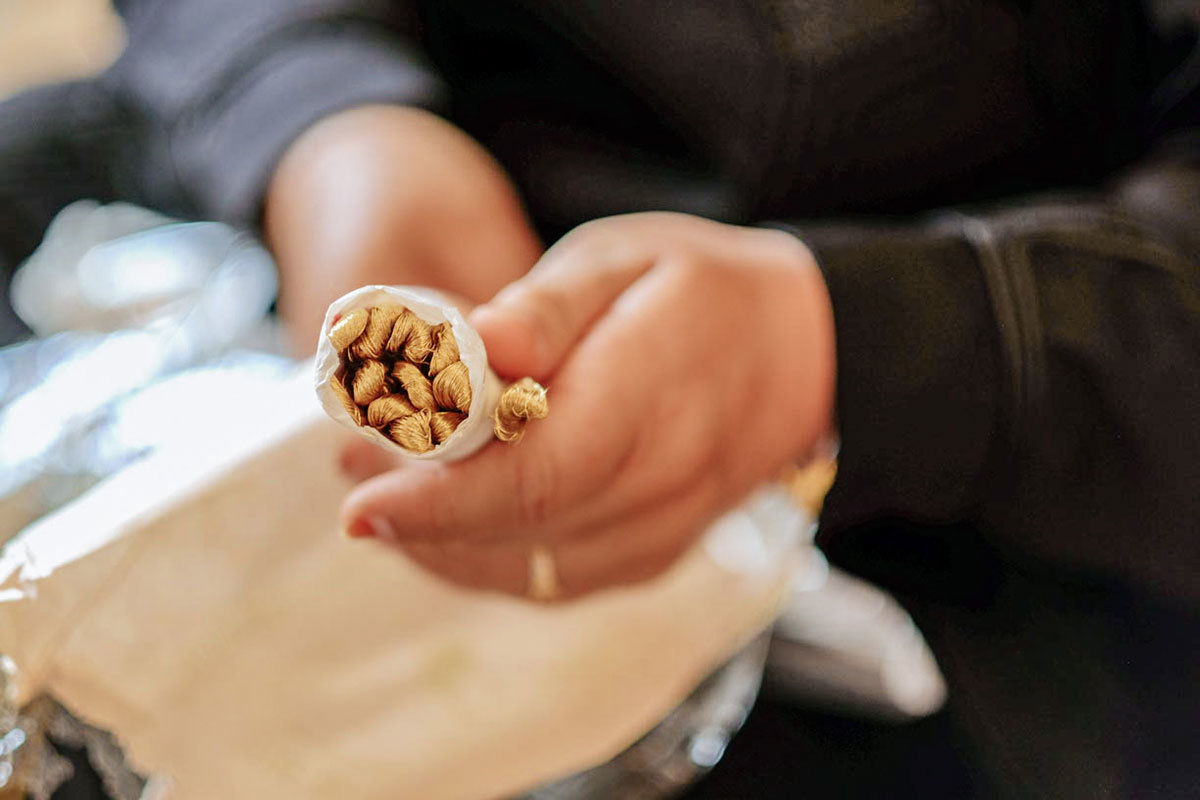 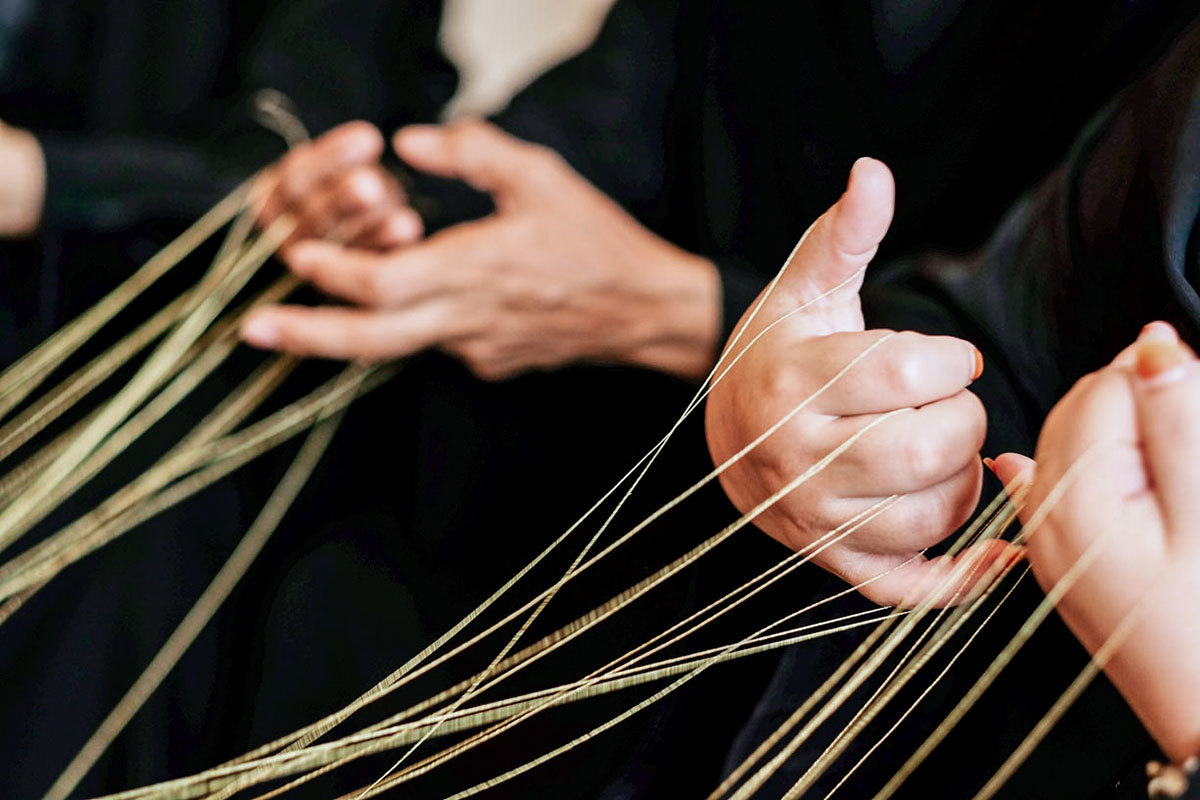 Kurar is a craft unique to Bahrain. Although products with similar designs are found elsewhere in the Gulf, they are usually made using machines. At Kurar House, the embroidery is made by hand, and the craft has been expanded to a number of products. Al Thawadi reaches into a sindoog mubayat, a traditional Bahraini chest, to fetch some of their creations. There are sheilas, headscarves worn by women, as well as cushions, bracelets and a thob.

When thinking about the term kurar, Shuwaiter believes that it stems from the word tikrar, the repetition of the same movement over and over – reflective of the artisan process.

One thing is certain: it’s a craft that entails teamwork. A minimum of three people are required to complete all stages. Most of the five women have been working with kurar for many years now. The two Shuwaiter sisters learned the craft from Dhami’s grandmother, who was their neighbour; Rashid joined them in the workshop three years ago. Only Al Thawadi, Nayla’s daughter, recently joined the group. Now, the artisans’ hopes weigh heavily on her, as the only young Bahraini currently able to master the craft.