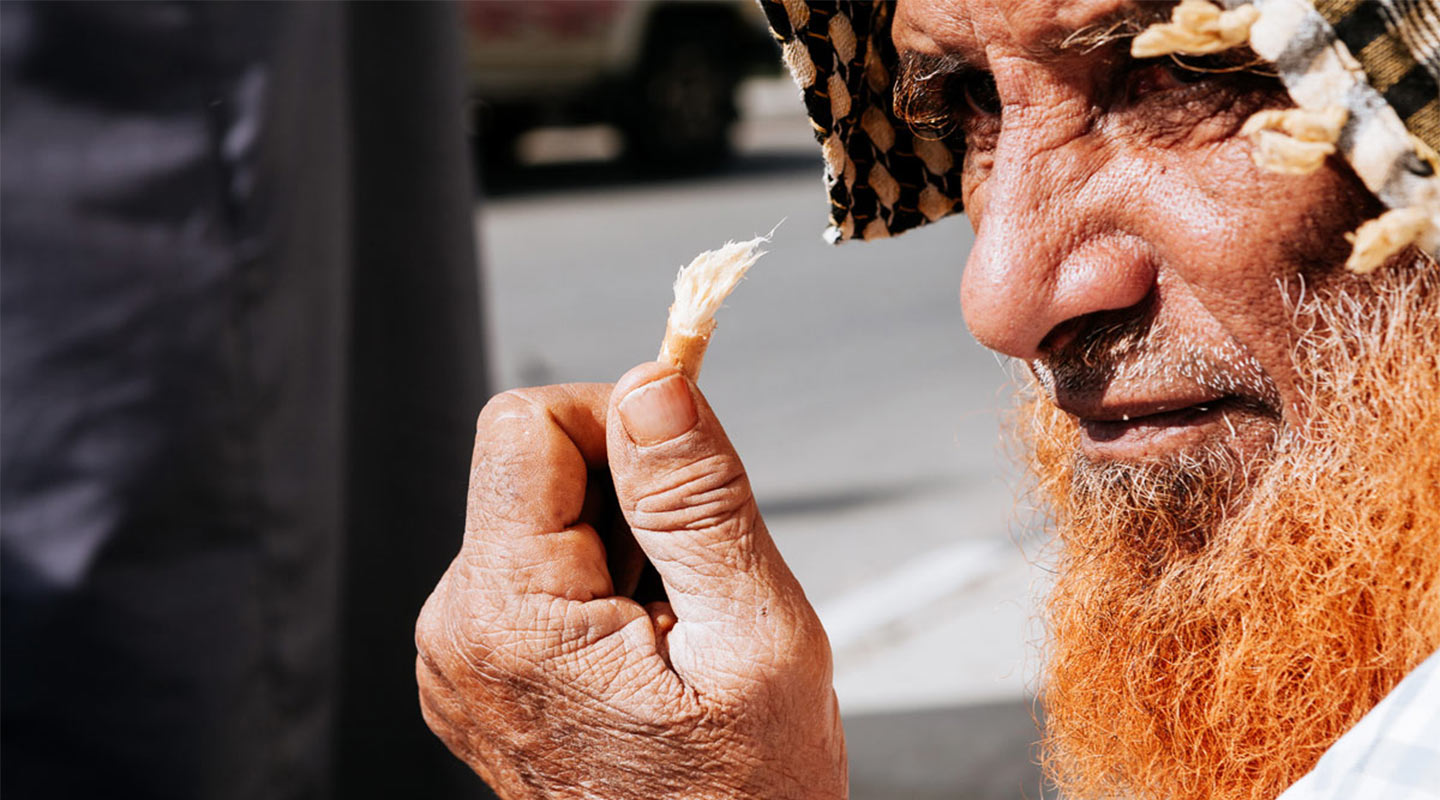 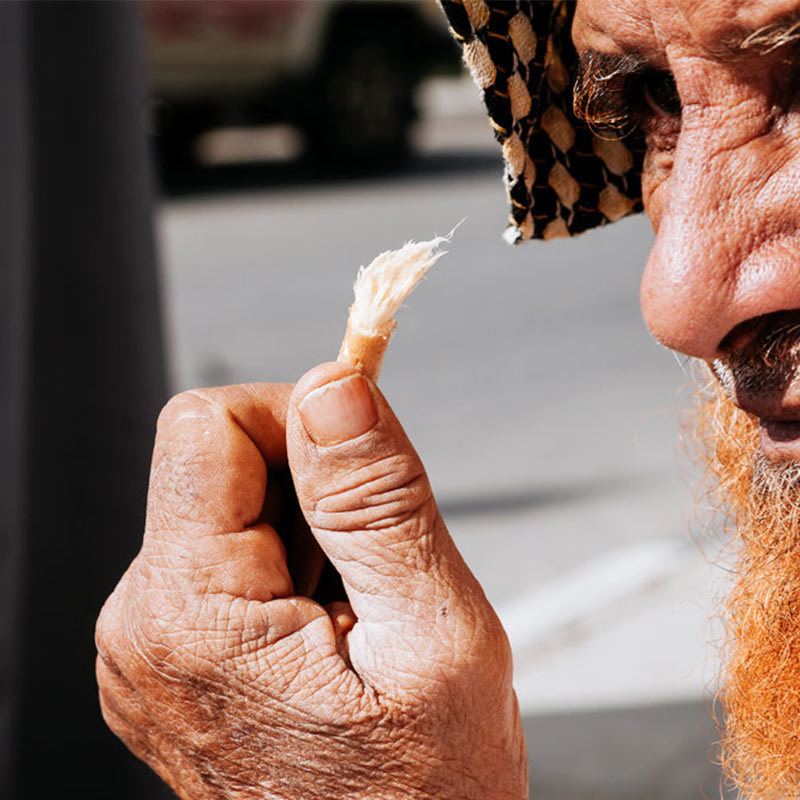 Natural toothbrushes made from the roots and branches of the arak tree are the preferred way to clean teeth across Saudi Arabia.

Fahim Al Ashu has pulled up his wooden cart to the side of the road leading through Jeddah’s historical neighbourhood Al Balad, parking it just outside a few shops selling dates in overflowing piles. He has put small carpets on top and spread out his goods on top – short and thin wooden sticks. There is only one thing for sale from Al Ashu’s cart: miswak, the natural toothbrush popular across Saudi Arabia.

‘You use it like this,’ says Al Ashu and picks up one of the sticks. ‘Put it in your mouth and chew on it a bit. Then, when the end is rugged, use it to brush your teeth.’ A customer walks up and picks up up a few sticks, smells them and then selects one to buy. He pays one riyal, puts the miswak in his pocket and walks away. Al Ashu, seated on the cart, leans back against a pillow as he takes a stick from the pile and starts chewing on its end. 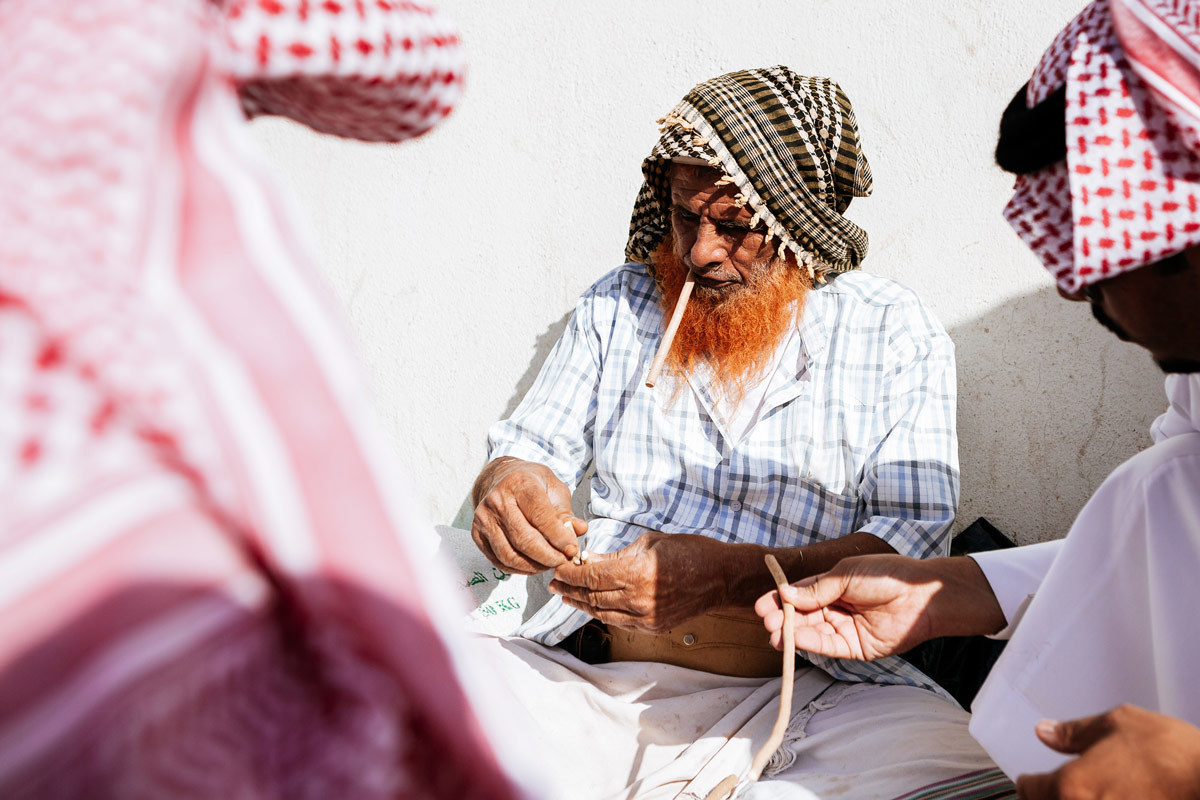 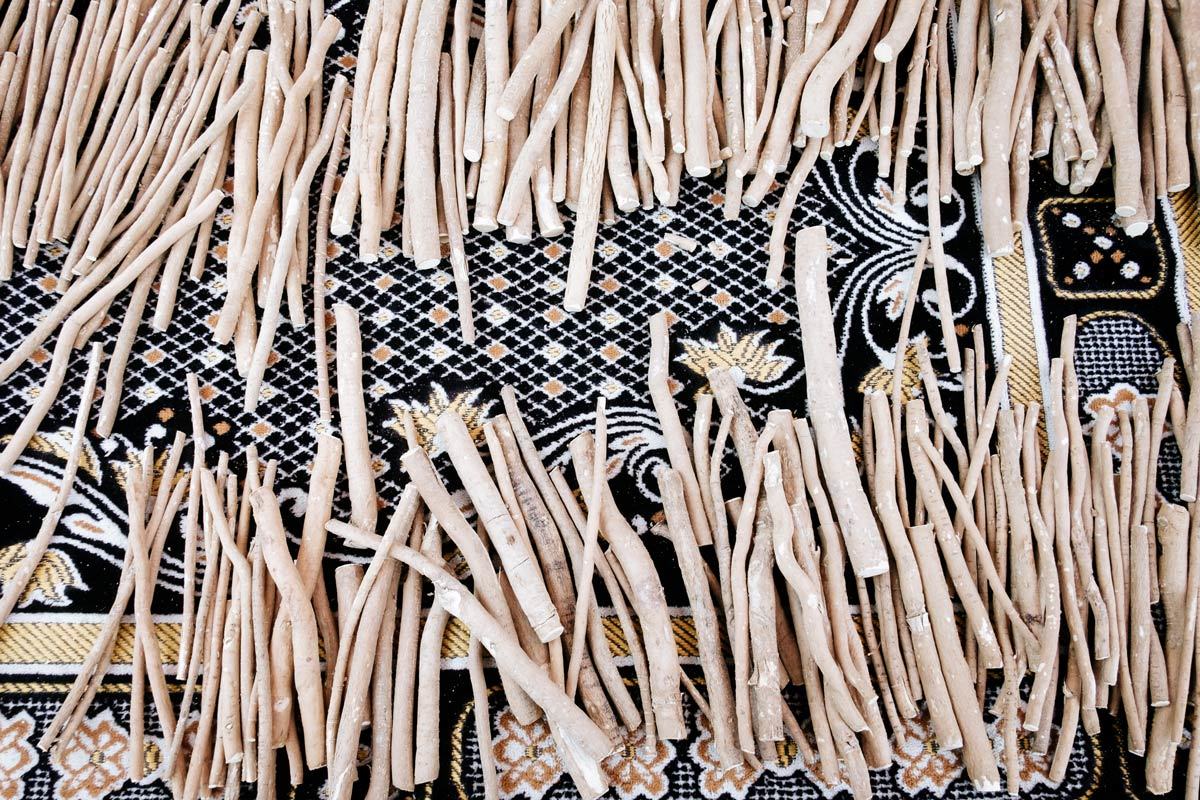 Top: Miswak sticks are sold across all of Saudi Arabia, often in markets and by sidewalk vendors
Bottom: Natural toothbrushes have been used since ancient times, and are still popular in large parts of the world

The miswak is part of an array of natural dental care products that have been used by humans for centuries. The ancient Romans, Greeks and Babylonians all used branches and roots to clean their teeth – sometimes, animal bones or feathers served the same purpose. Today, the stick is used across all of the Arab world, as well as in India, Pakistan and many countries in Africa.

In all simplicity – the miswak is just a short piece of branch or root, collected from the wild – the stick serves a double purpose. The end, once the fibres have been rugged up by a light chewing, turns into a brush; the sap, released by the chewing, functions as a mouth freshener and antiseptic. ‘Miswaks have so many medical benefits, and they are good for both the teeth and the gum,’ says Al Ashu.

Indeed, several studies have shown that the miswak is equally good or even better than conventional brushes and toothpastes. Several ingredients used in commercial dental care products occur naturally in miswak sticks, such as silica and fluorides. 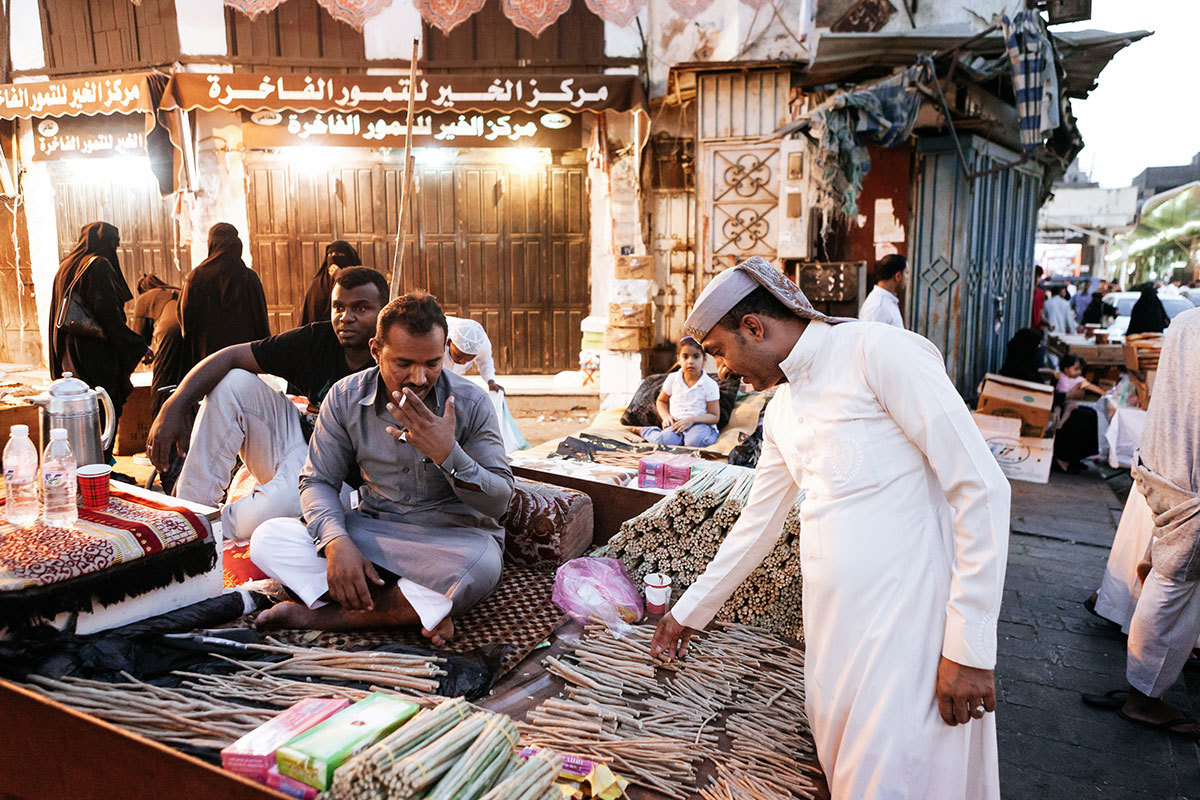 The miswak, which has a distinct spicy taste, typically comes from the root of the arak tree. Less strong sticks are collected from the branches

‘There are different kinds of miswak. The best ones come from the roots, they have a hot taste. Some people use branches instead, which are milder,’ says Al Ashu.

Another customer, dressed in a football t-shirt and sneakers, stops at the cart and selects a thin piece of root with a strong smell. ‘I use miswak every day. Always before prayer, and in the morning and evening. It’s the best way to keep clean’ he says.

The spread and popularity of miswak, despite dating back long before Islamic times, has increased due to religious endorsement. The Prophet Mohammad was known to use the miswak, and several hadiths recommend it. During Ramadan, when people use the stick to clean the mouth while fasting, demand is particularly high. 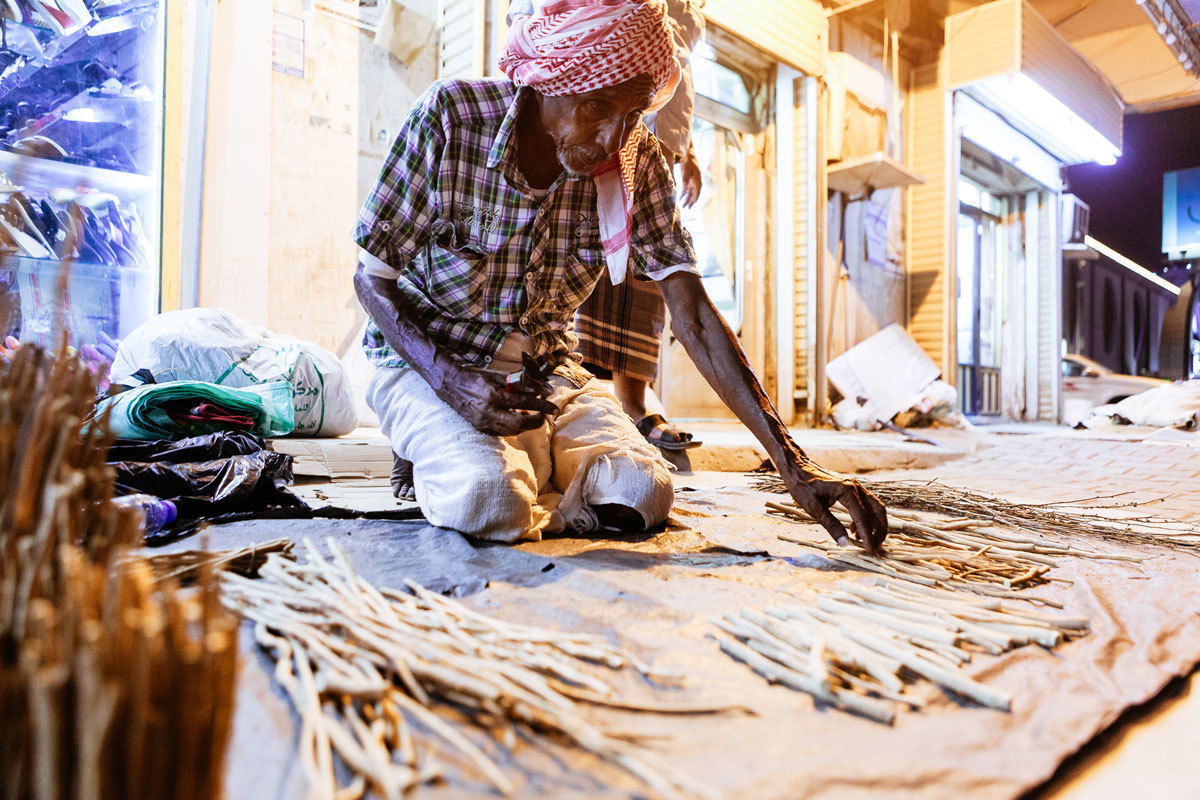 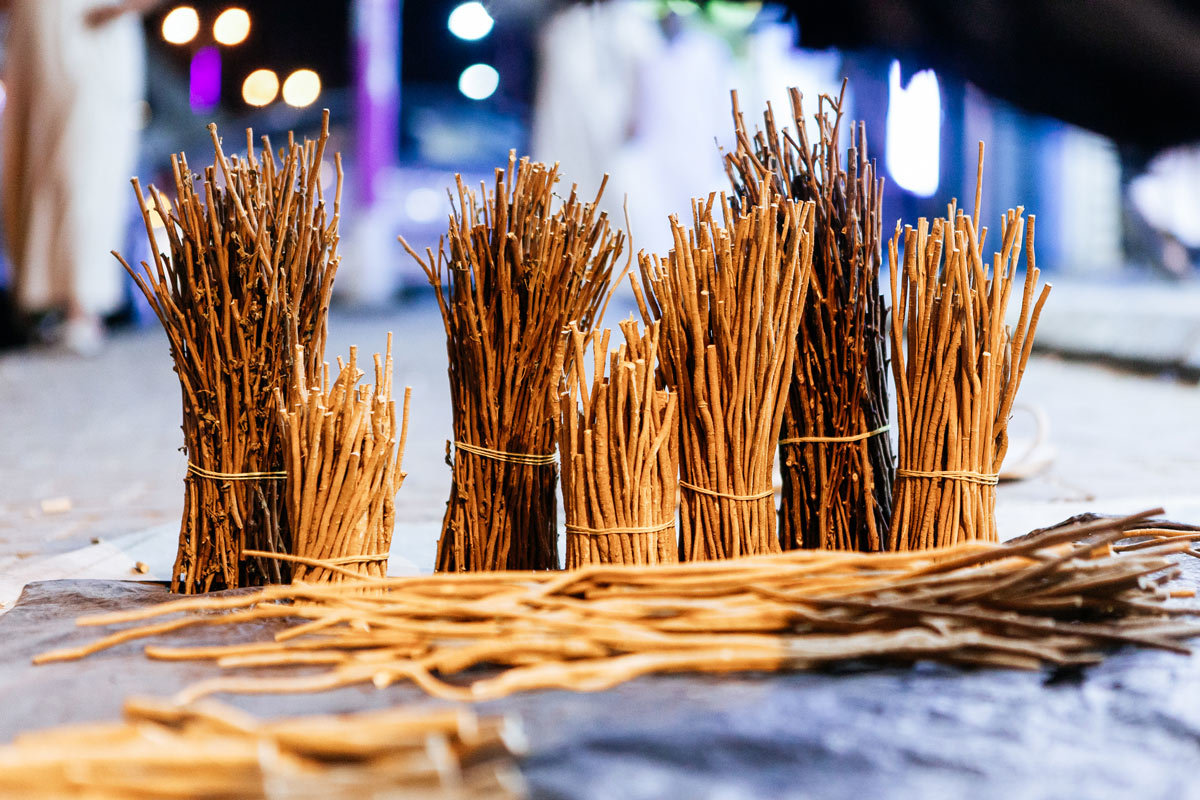 Top: Sticks are popular across Saudi Arabia, and can be bought in both shops and markets

Bottom: The miswak has many medicinal benefits, and studies often find it as efficient or even
better than the commercial toothbrush

The roots and branches Al Ashu has for sale – pale brown in colour and with a soft, uneven bark – all come from the arak tree, native to Saudi Arabia and many other countries with a similar dry and hot climate. Some of the best miswaks are picked in the kingdom’s coastal south, several hours’ drive from Jeddah.

In a rural area not far from the southern city of Sabya, surrounded on all sides by open plains, is a village surrounded by groves of unruly bushes. This is how the arak trees grow: in rough shrubs, with small leaves and sturdy branches hanging down to the ground. 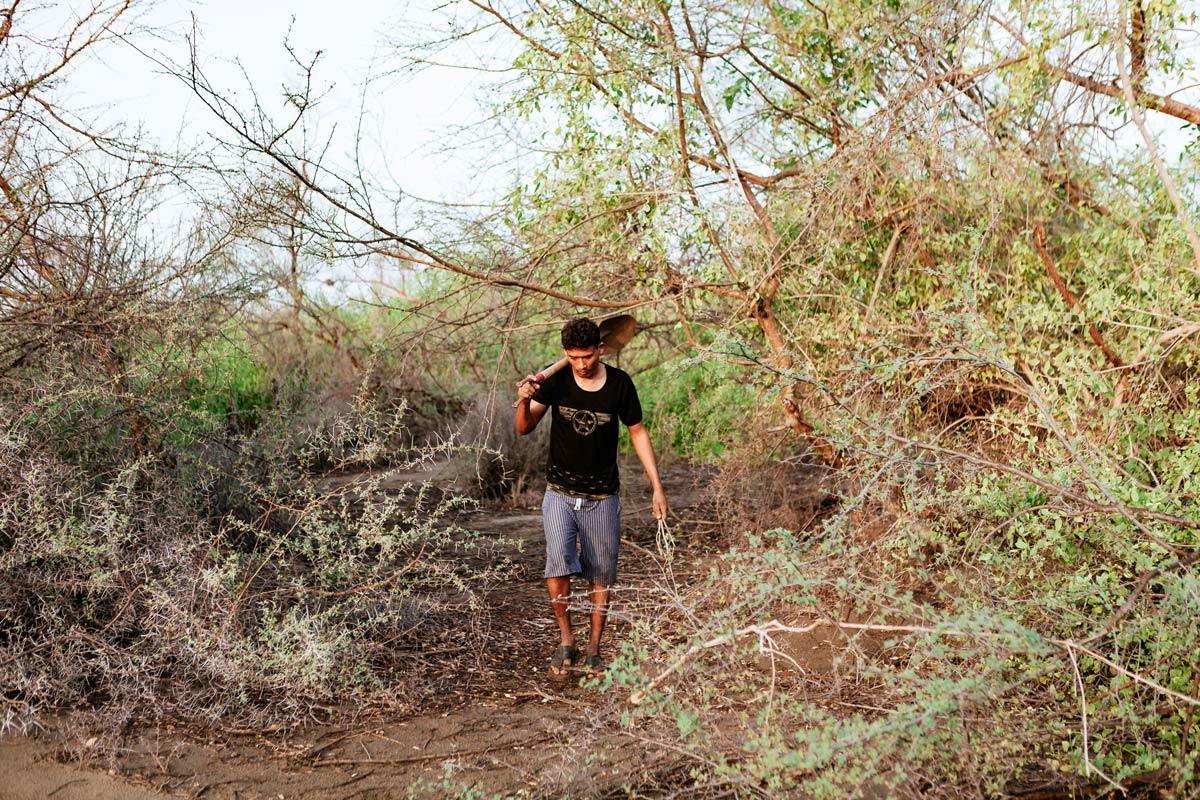 The hot and dry climate of Saudi Arabia is perfect for the arak tree, which also grows across many parts of Africa and Asia

It is early in the morning as Mohammad Abdullah leaves his house, carrying a shovel in one hand. He walks to a nearby grove, where arak trees grow tightly together. With one hand he lifts the branches off the ground, and starts digging in the earth. The roots soon become visible, and with the help of the shovel, he cuts them from off the tree. ‘I always go out in the early mornings or evenings, when the weather is good. I work alone sometimes, or go with other people,’ says Abdullah, as he scrapes off the soil from a long and thin root, then holds it up. ‘Thin ones have a much stronger smell, and most people like them more,’ he says. 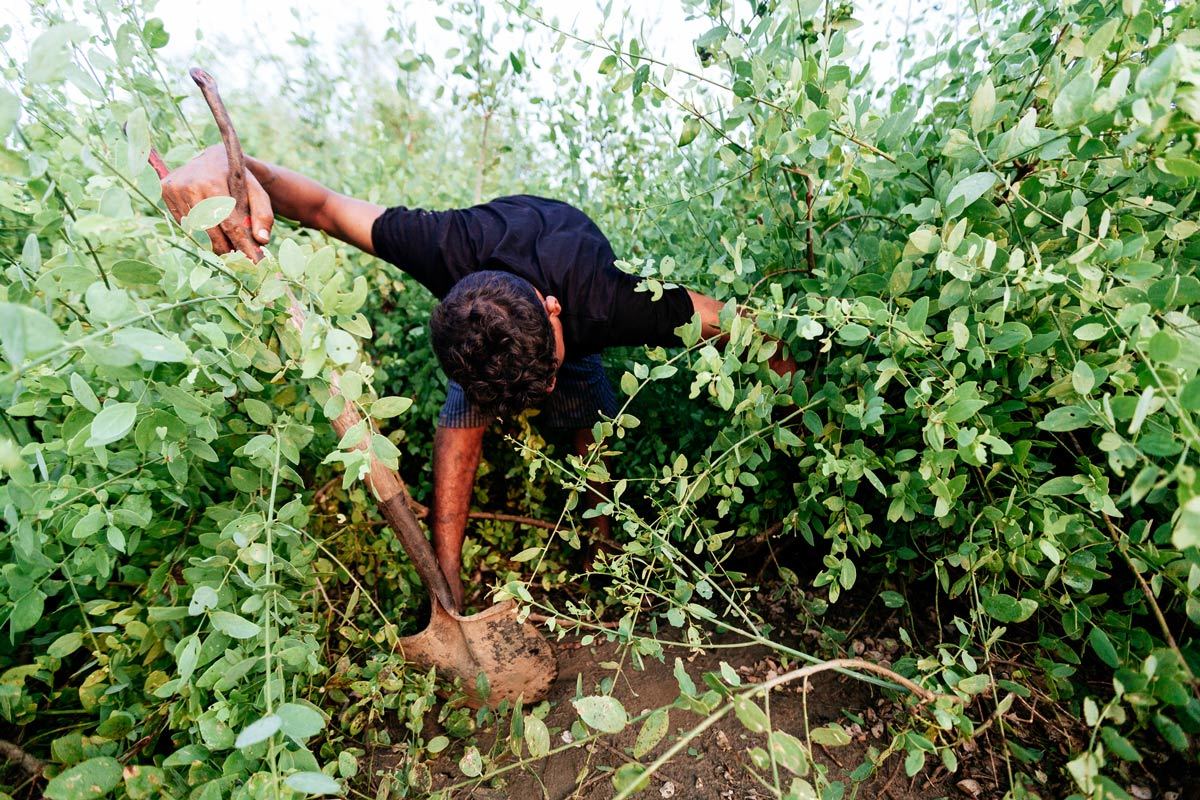 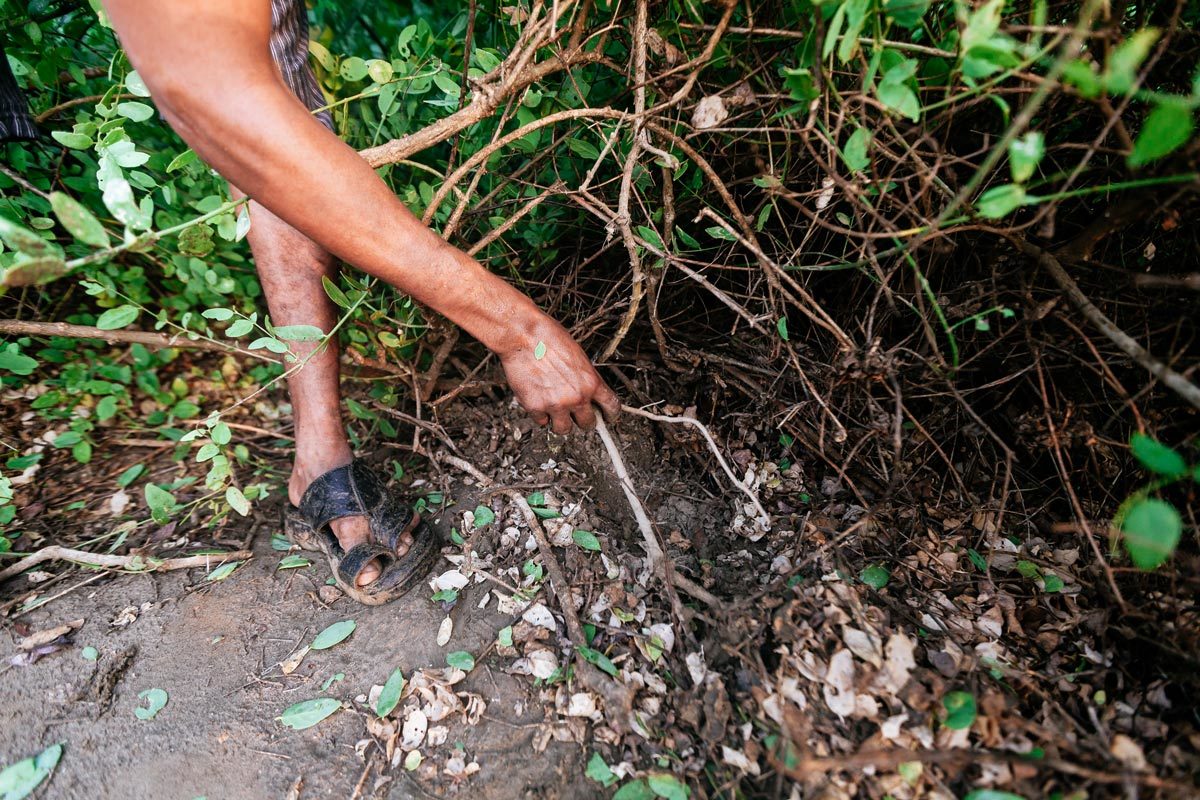 Top: Mohammad Abdullah, from Sabya in southern Saudi Arabia, collects miswak from a grove with arak trees in the mornings and early evenings, when the sun is not too hot

Bottom: ‘You have to lift the leaves to find the roots, then dig them out,’ says Mohammad Abdullah

It does not take long until Abdullah has collected a handful of roots. The work is straightforward but tiresome, requiring constant digging. He often works for one or two hours, gathering enough miswak to sell to vendors working in the cities. Across Saudi Arabia, miswak are sold at markets, sidewalks and outside mosques – and sticks packaged in plastic can be bought in supermarkets and corner shops. Vendors often keep fresh ones in water and a bit of ginger, to keep their fibres soft and moist.

The original and most sought-after miswaks come from the arak tree. In the absence of that, other kinds of trees are used across the world as well, including orange, lime, olive or neem. In Saudi Arabia, while native miswaks are still widely collected and sold, many distributors also import packaged sticks from Pakistan. 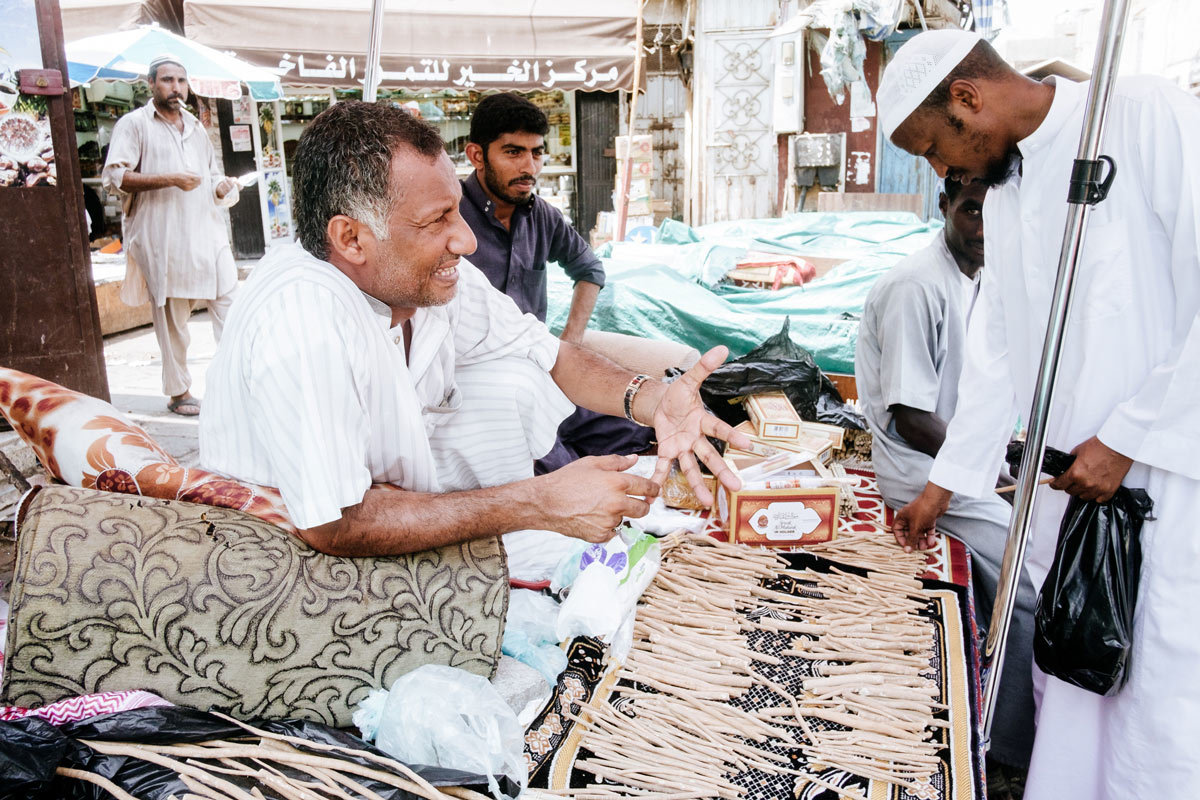 Al Ashu’s miswaks are all Saudi Arabian – when sold one by one in the market, they need to be brought fresh. Throughout the day, passers-by stop at his cart, to smell and select from the sticks on display.

‘Myself, I only use miswak. Just try for one week and you will see the difference! But you must not use any other toothbrush meanwhile, that will ruin the experience,’ says Al Ashu with a smile.