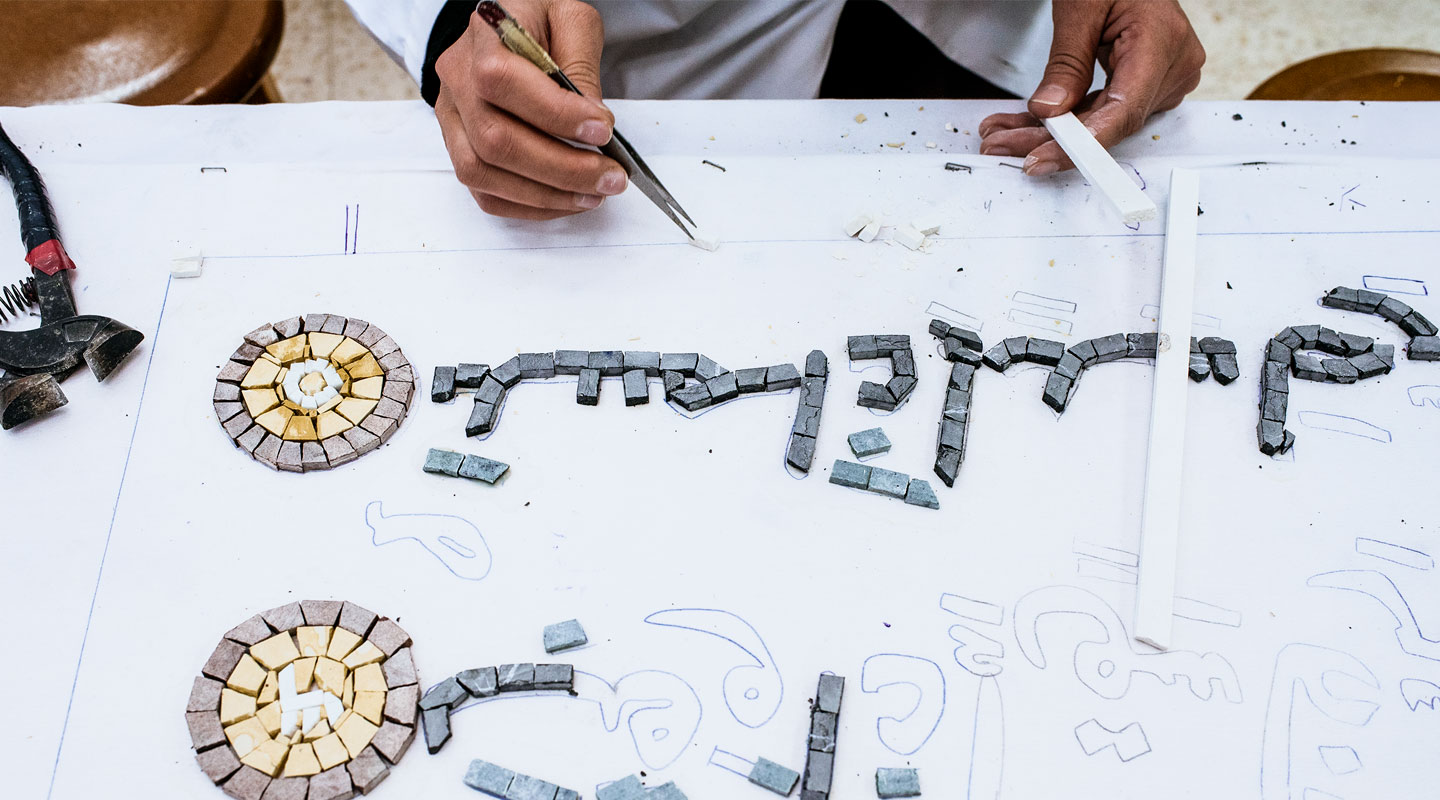 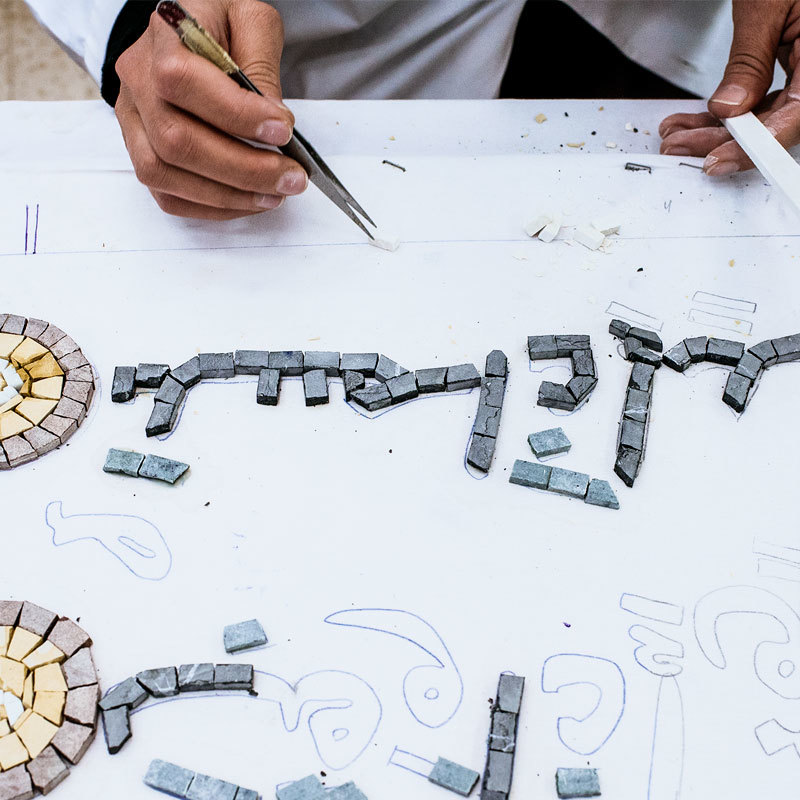 Behind a bustling market street in the central Jordanian city of Madaba, a wooden barn door opens up to the courtyard of a 2,000-year-old building. Around the corner, a dramatic cement wall juts out from a glass and metal frame – the architectural contrast is striking. This is the Madaba Institute for Mosaic Art and Restoration, founded in 1992 as a small speciality school and today a fully-fledged university, dedicated to upkeep a craft that spans a few thousand years.

‘Our institute is unique to the region. While you can study archaeology in general elsewhere in the Middle East, this is the only accredited place where students can specialise in mosaic production and restoration,’ says Amjad Awad, a facility manager.

Preserving ancient mosaics is no easy feat, but being surrounded by thousand-years old art certainly helps. Steps away from the main courtyard hang the remains of the Machaerus stone, a rectangular slate embedded with a navy and white motif and the oldest mosaic ever recorded in Jordan. The first-century-BC piece is now the gem of the archaeological park. 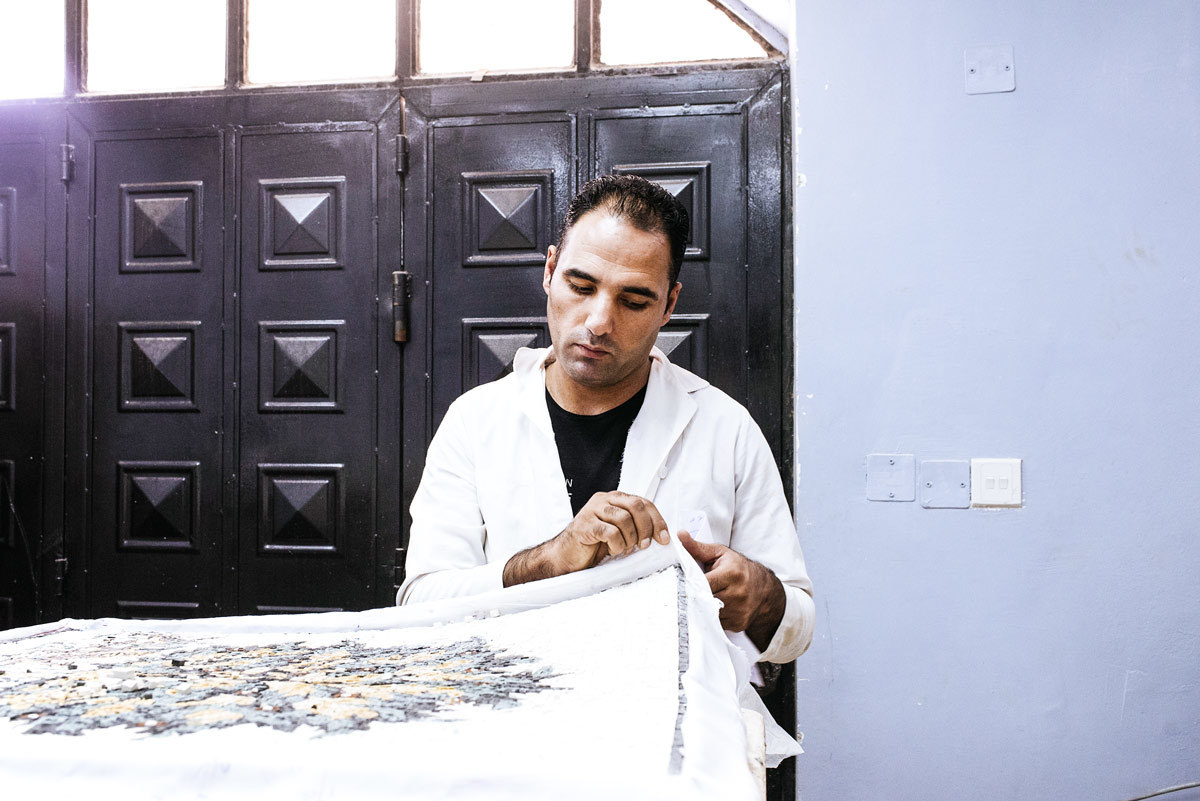 Meshouret Fathat, an institute technician, spends two months every year to hone his skills in Ravenna, an Italian capital of mosaics 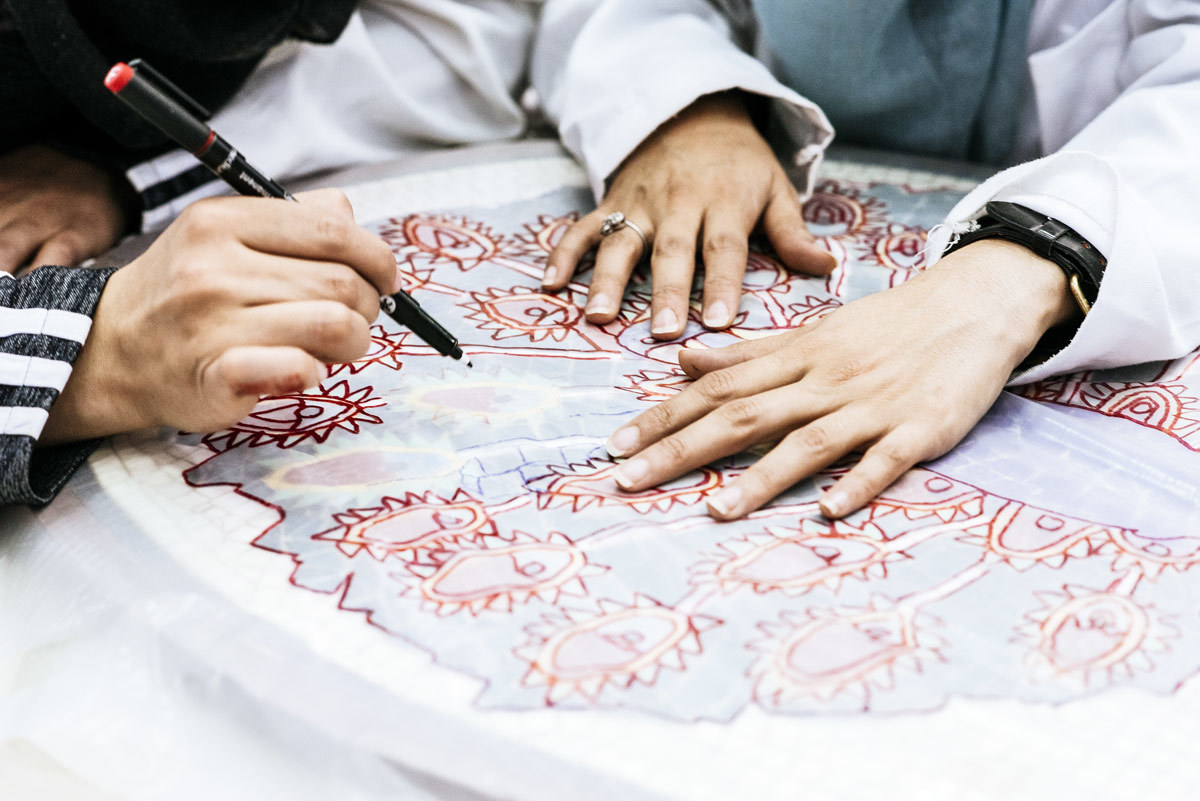 Students trace the outline of a completed mosaic, to use it for creating a copy of the design 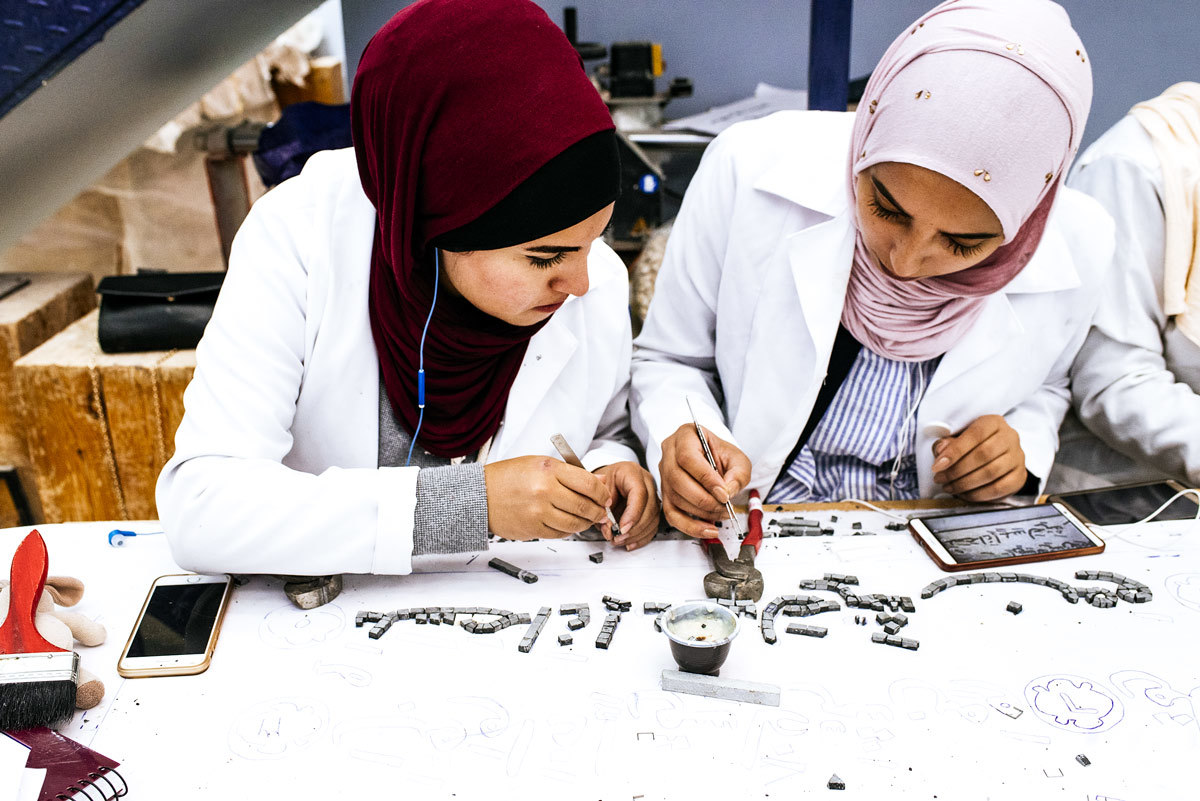 Awad leads the way into one of the school’s workshops, where finished mosaic pieces line the walls. There are full-sized copies of historic masterpieces, new portraits of Jordan’s King Abdullah II and tributes to the Great Arab Revolt’s centennial celebration. Students, dressed in white lab coats, sit hunched over papers with mosaic design drawings, where patterns are laid out with coloured stones. At one table sits Sunya Khatouse, a second-year student from Jordan’s industrial city of Zarqa. ‘I lived in Madaba for 15 years before finding out about this school. Now I love this art. I dream of becoming a specialist, or even just opening a shop of my own,’ she says.

Along with studying general drawing, art theory, Arabic and English, students at the institute spend two years in mosaic restoration, creation and preservation courses, led by local technicians. Teachers refine their own skills during annual trainings, in mosaic capitals scattered across Italy and Spain.

Armed with a pair of tweezers and thick pliers, Khatouse cuts pieces of limestone and granite into tiny squares, then places them on a paper drawing. This is the modern way of laying mosaic – and today, the primary method used at the institute. First of all, pupils draw designs on tracing paper. They then turn the paper upside-down, and use it as a template. Using small stones, carefully glued together, they fill in the design – once the motif is complete they flip the paper upside down, peel it away from the stones, then replace it with a mortar backing and fit it into a frame. 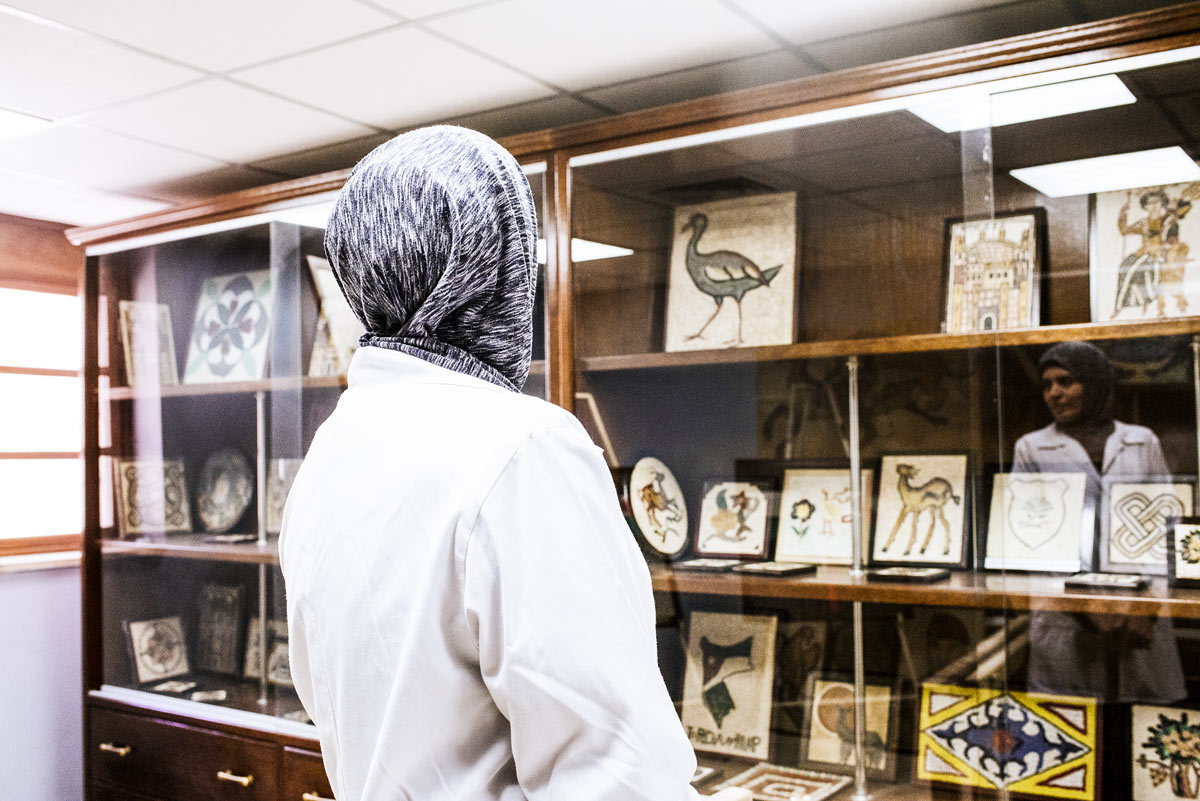 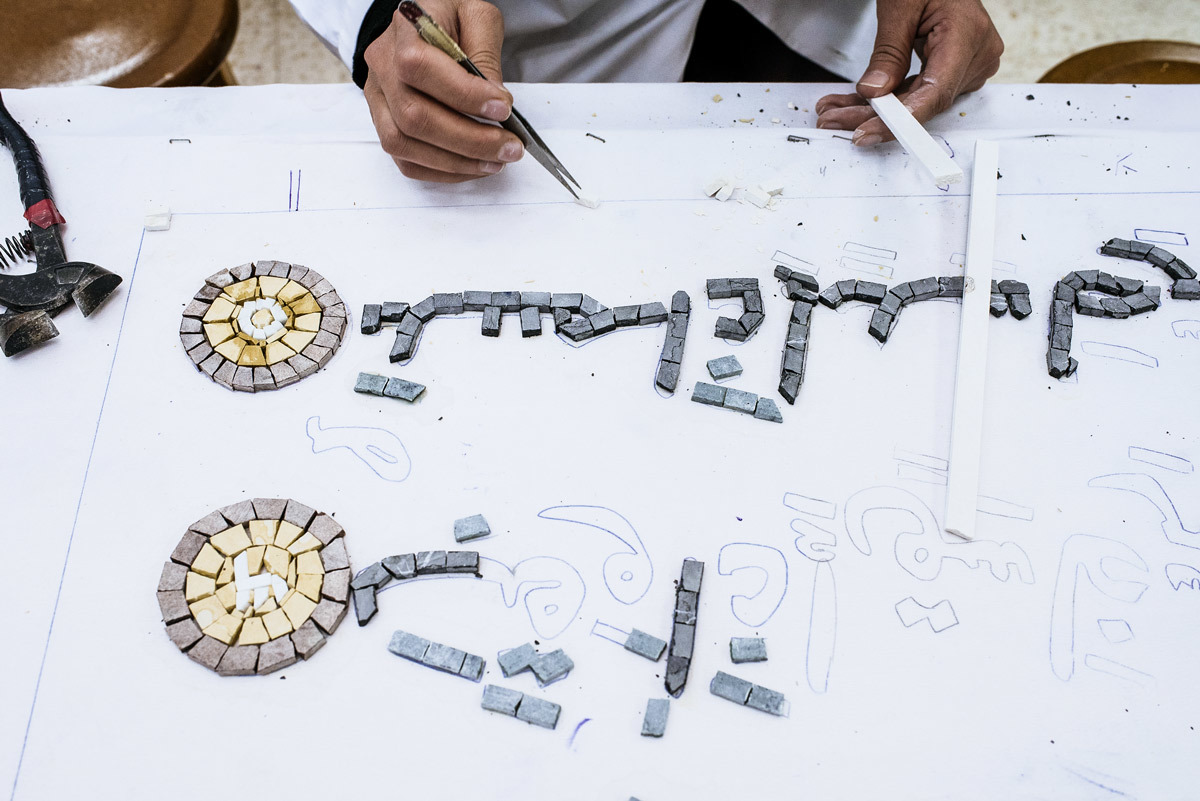 Top: Student Sunya Khatouse wants to continue studying mosaic construction or open her own shop with friends after graduation

Bottom: Using the modern method of laying mosaic, students cut stems of limestone and marble with thick pliers, then place them on a paper with the outlined design

‘This is the easiest way to ensure there are no mistakes. The original method is more complex because it’s done directly on top of the surface,’ says Khatouse, as she leads the way to another corner of the workshop. There, a circular mosaic taller than her own height leans against the wall. Covering its surface are hundreds of beige and chocolate coloured tiles, forming a delicate human face and hair. Khatouse traces the blue stones forming the contours of the tiled figure with her fingers. ‘The outline you see here is called andamento. The head is a curved line, so the rows of stones around it should also follow this pattern.’

Another piece, partially done, has the image of a man and woman, reaching up toward a bird in the sky. The figures are made of many dark stones, no larger than sunflower seeds. ‘This piece uses the original method where stones are laid directly on the surface and secured with mortar. It requires expert hands, because there is no room for error,’ Khatouse says. 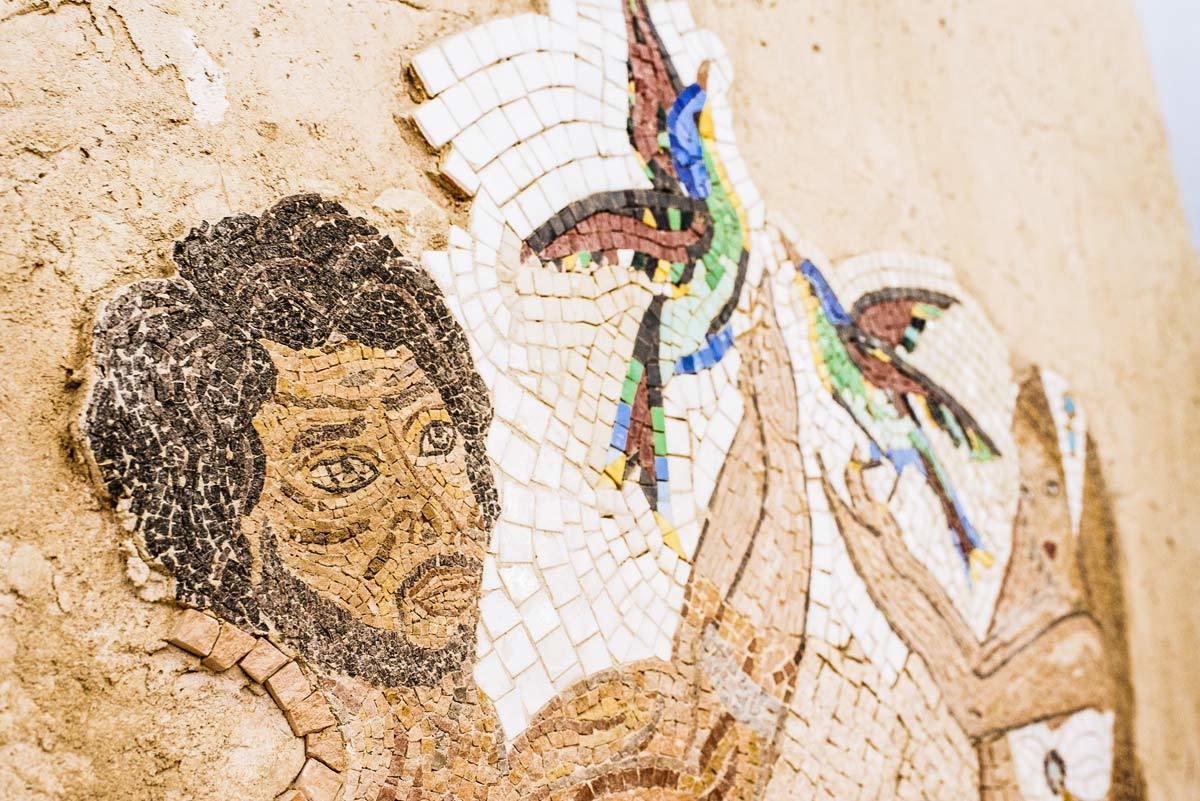 A mosaic in the process of being completed, using the traditional method of placing stones directly onto the stone's surface and securing with mortar. An older method also uses microstones to achieve more detail 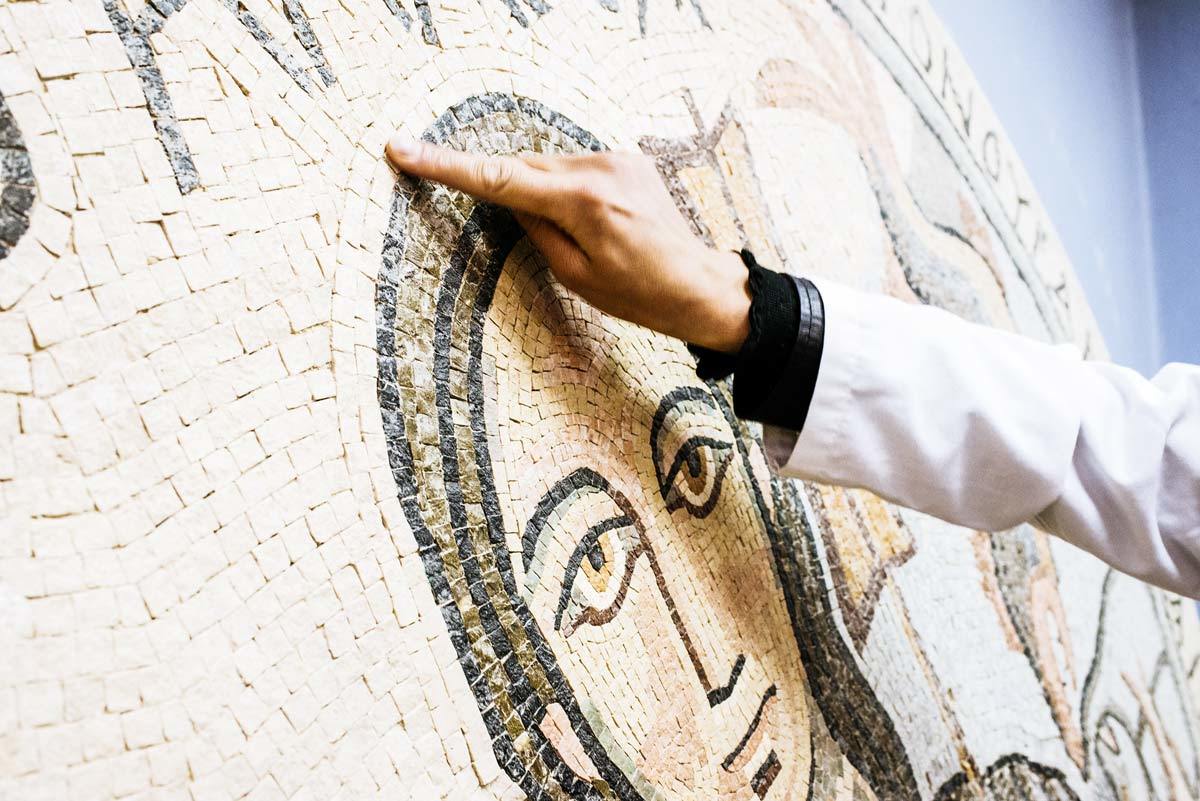 Tracing the andamento, an Italian term used for the lines made of stones marking the outlines of a face or predominant shape 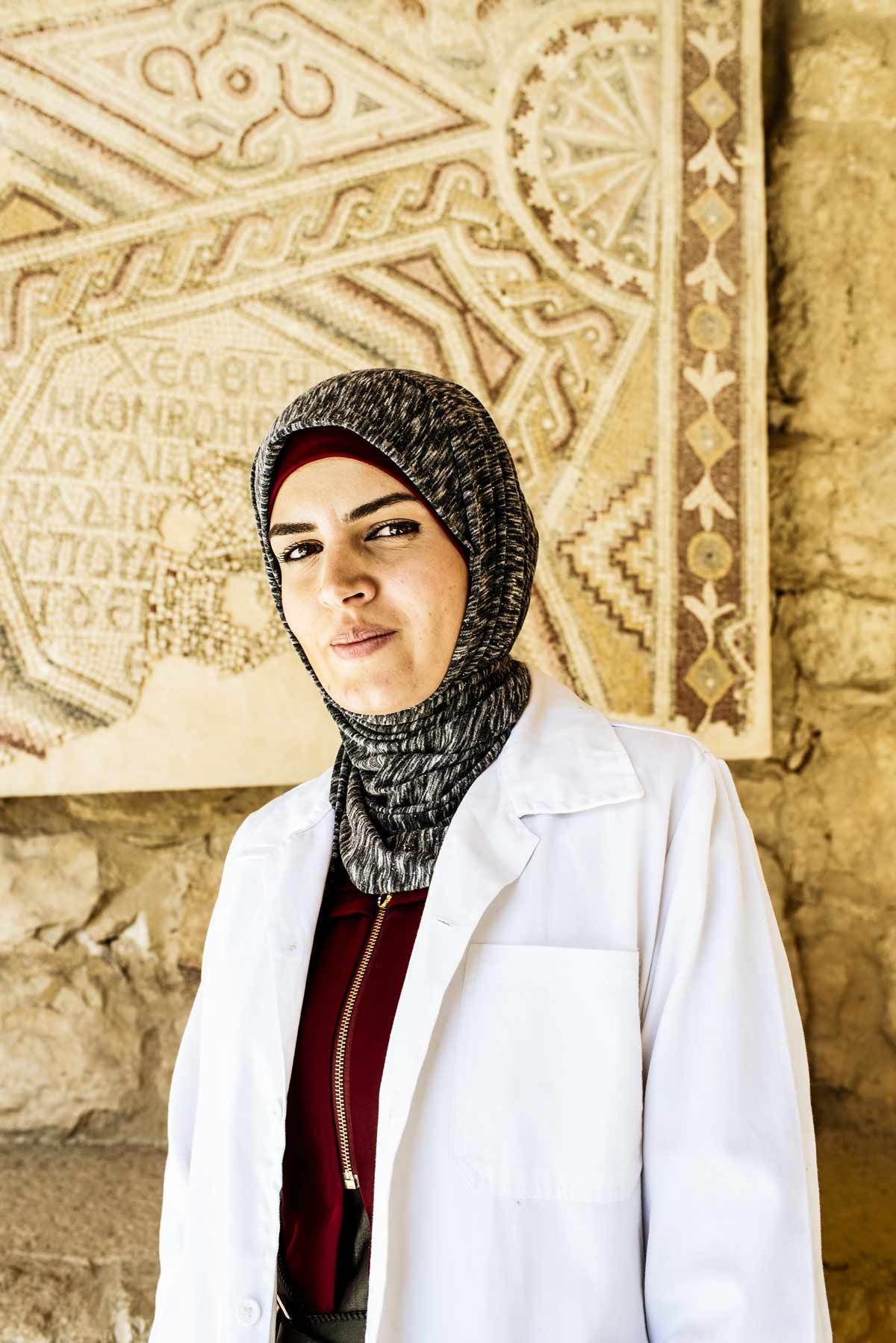 Sunya Khatouse had never heard about mosaics before enrolling at the institute. Now she plans to open her own space after graduating

Madaba, some 30km southwest of Amman, has a history spanning 3,500 years and a handful of major civilisations. The Nabateans, who founded the ancient city of Petra, laid claim here until they were overtaken by the Romans in the first century AD. Over the next centuries, the region would see the rise and fall of both the Byzantine Empire and Ummayad Caliphate. By the time Madaba was resettled in the 1800s, stories of these developments and conquests reappeared through hundreds of mosaics that were unearthed in the rubble of old ruins, homes and open fields.

The perhaps most famous of all mosaics can be found in the Greek Orthodox Church of St. George, a few kilometres from downtown Madaba. Covering parts of the church floor is the Madaba Map, a sixth century masterpiece which, in its original form, featured two million meticulously laid tiles depicting the area covering the Dead Sea, Jericho, Bethlehem and Jerusalem. There is also a near-perfect preserved mosaic laid in 718 AD east of Madaba, at the World Heritage Site Umm Ar-Rasas.

For both researchers and tourists, sites like these have made the area an international hub for art and history. At the institute, teachers and students hope to not only protect Madaba’s ancient art but also ensure its continuation. 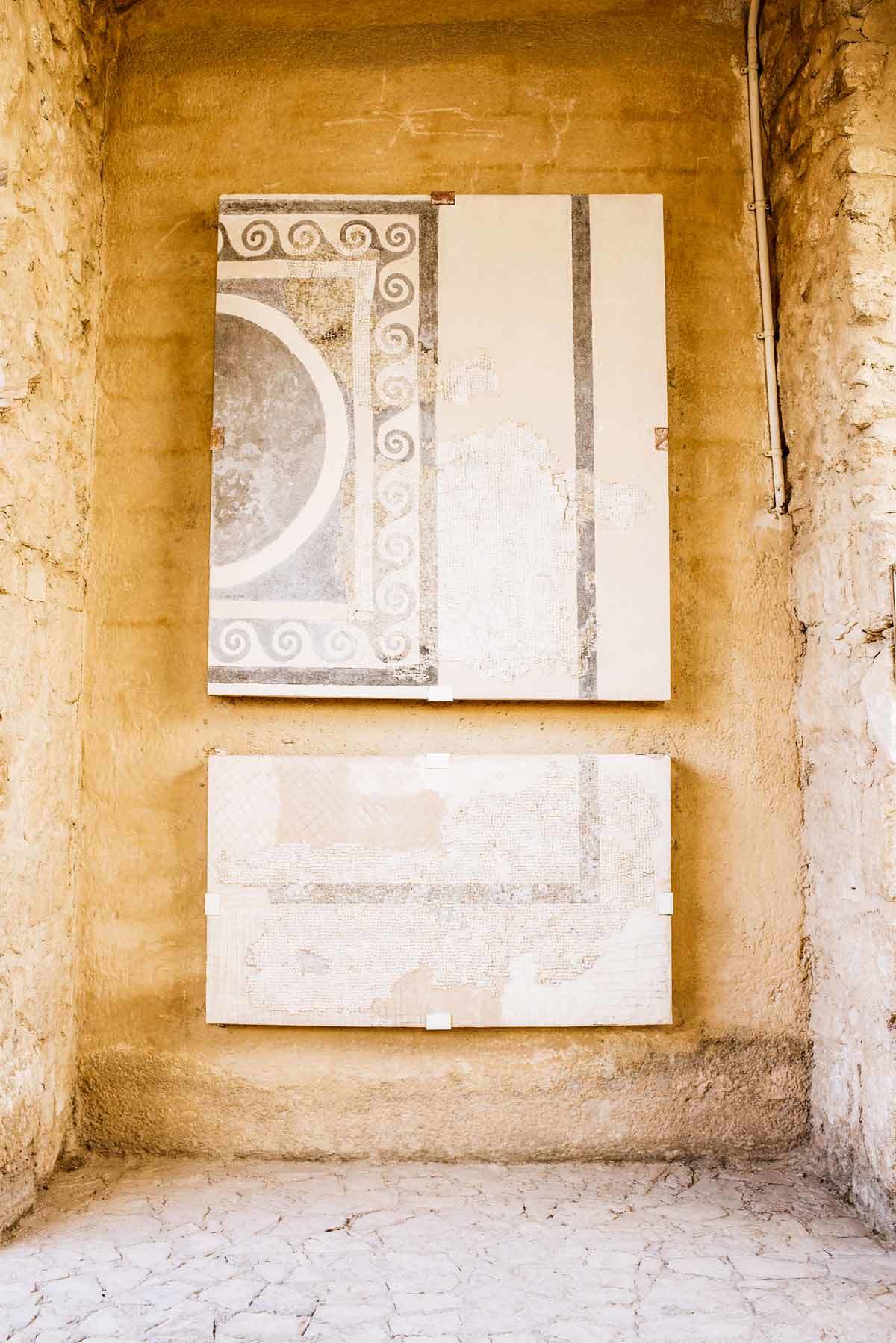 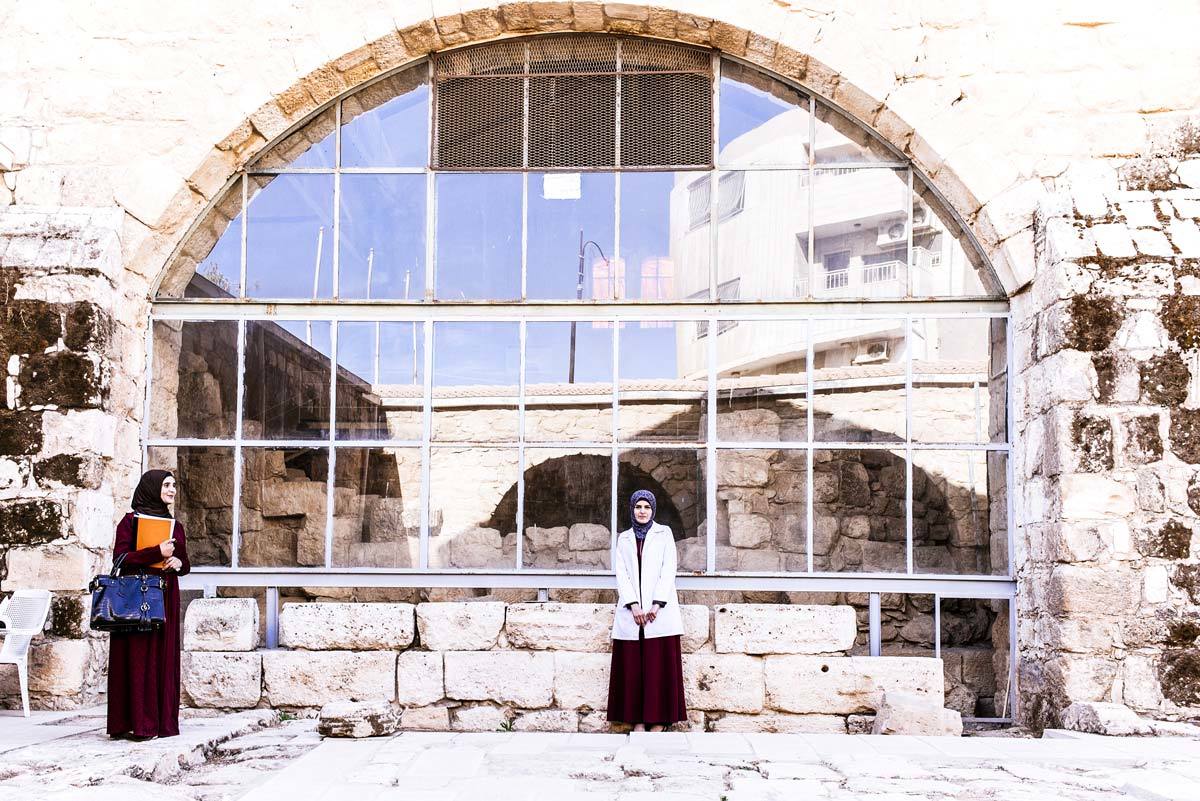 Top: The first century BC Machaerus mosaic is the oldest ever recorded in Jordan and is showcased in the institute's adjoining archeological park

Bottom: Students at the Madaba Institute stand in front of a ruin housing sixth century mosaics and artwork

‘Our mission is to help more Jordanians become experts in this field. The cultural budget in Jordan is not near enough to bring restoration experts from Italy and elsewhere, so we want to make sure that we don’t have to import talent,’ says Awad.

When finished in Madaba, graduates go into roles at the Ministry of Antiquities, further studies in art and archaeology at other universities, or stay with the institute as mosaic technicians.

‘We have many teachers who specialised in mosaics here and now restore cultural sites across the country. I believe this is a very important presence in my country,’ says Ahmad Farhan Al Amaireh, the school’s dean. With one hand, he gestures toward the pale stone bricks of the ruins surrounding the university buildings. ‘Archaeologists come here and call our country one big, open-air museum. A big part of that history is these ancient Madaba mosaics.’ 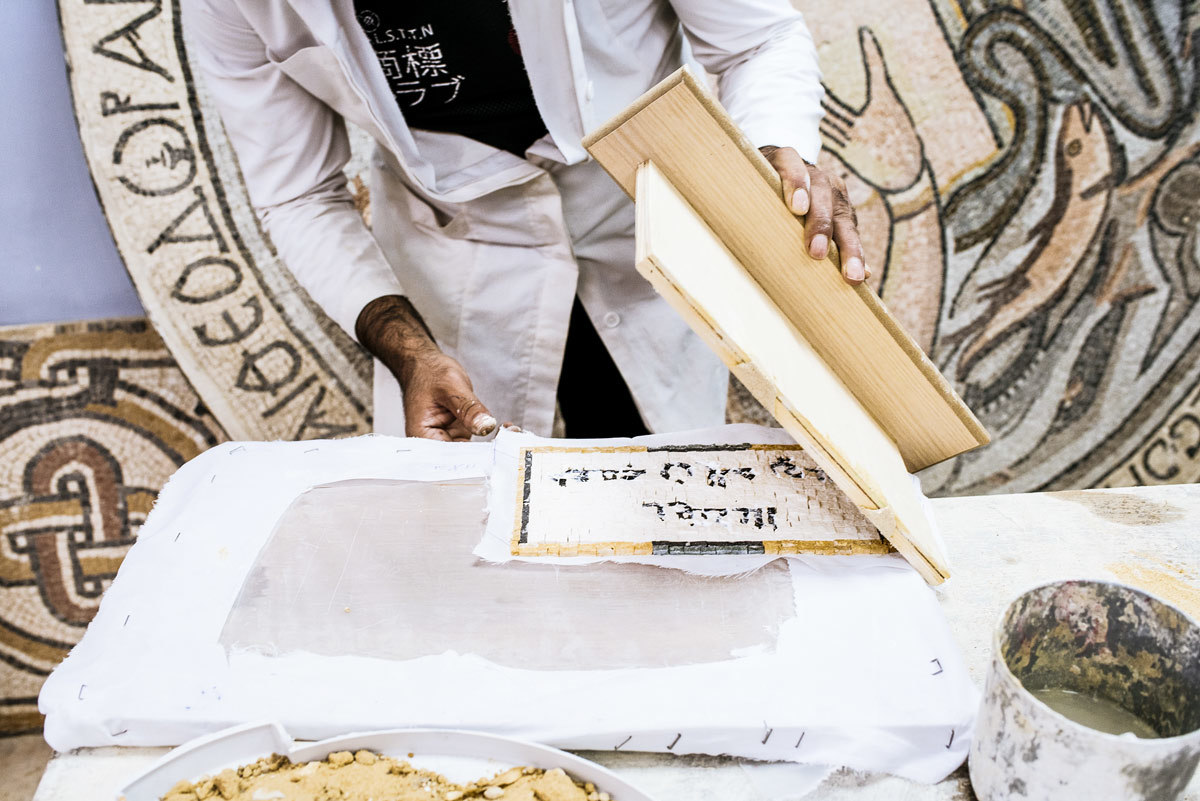 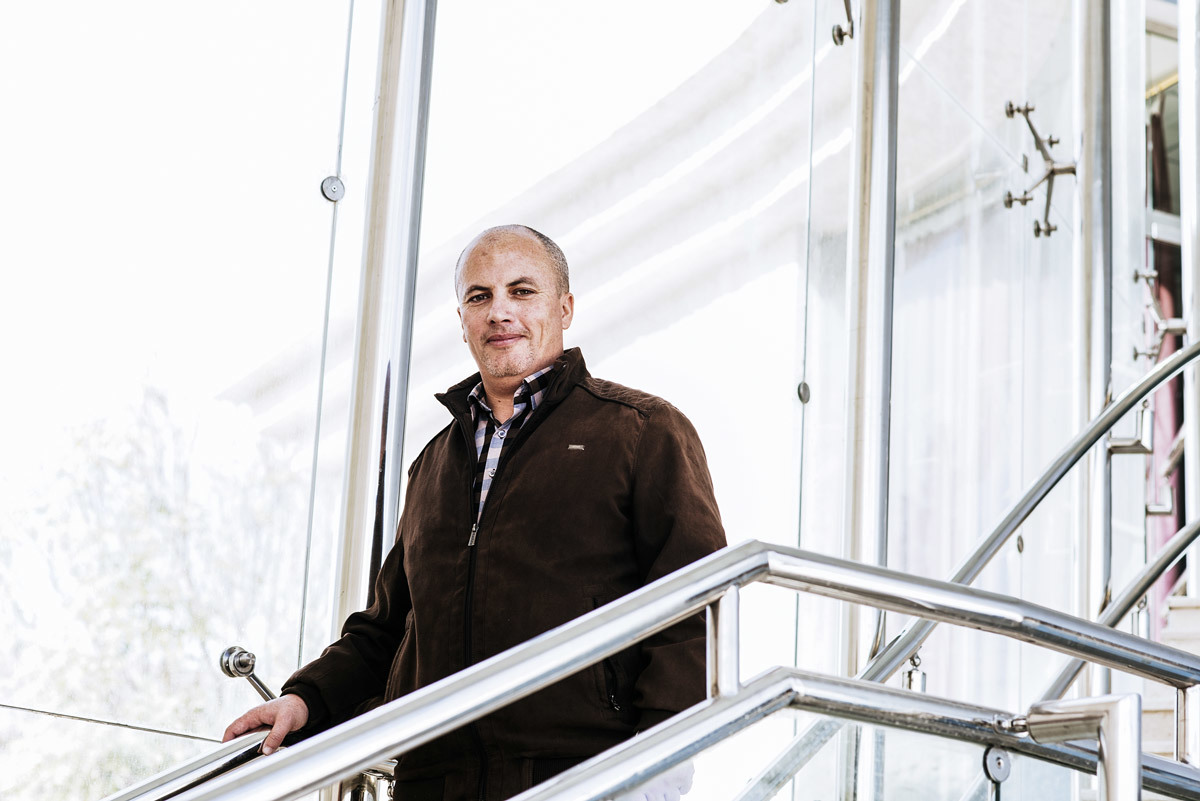 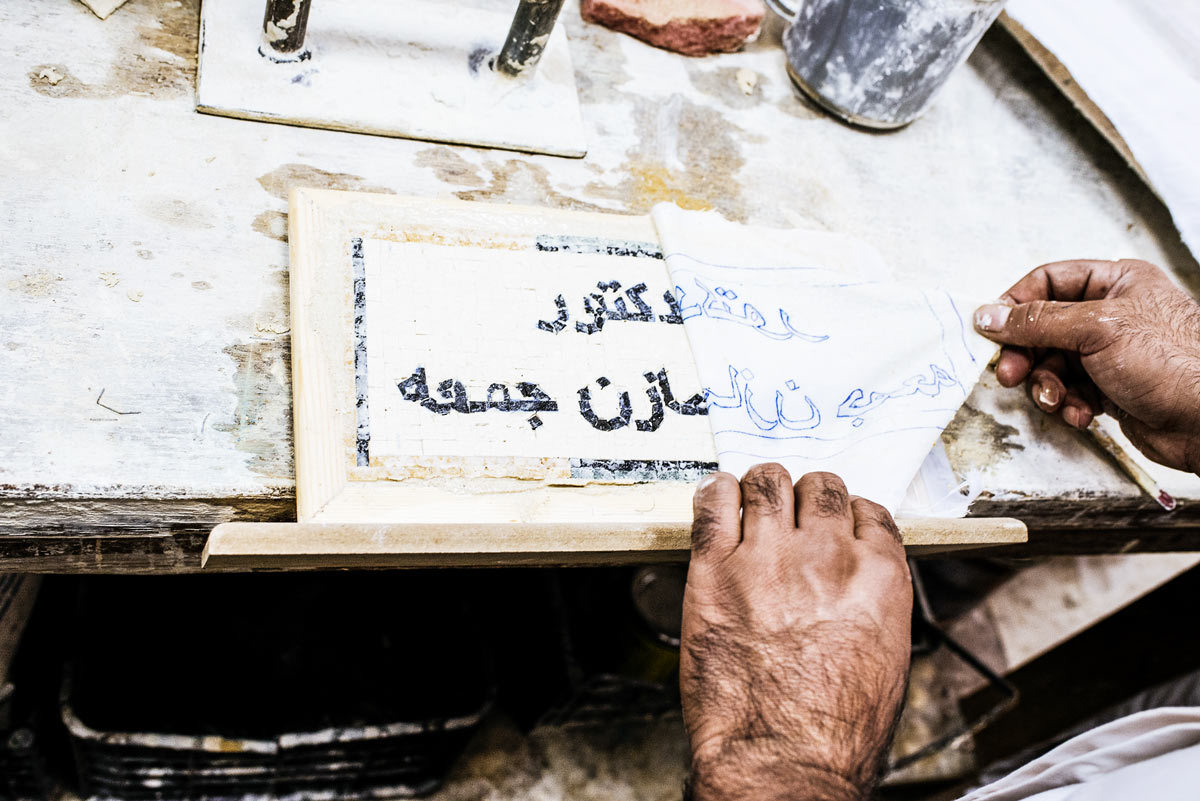 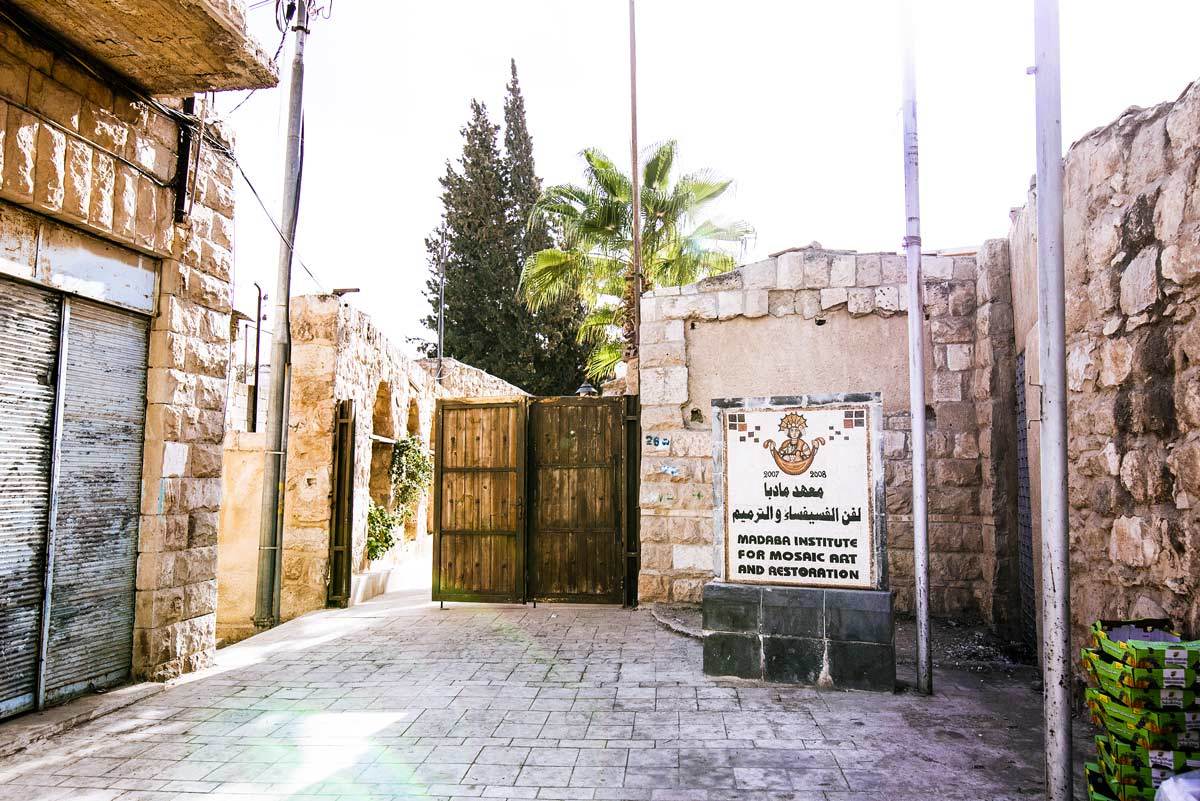 Top Left: A technician about to flip a mosaic that has been completed

Top Right: After flipping the mosaic, its guiding template is peeled away

Bottom Left: Amjad Awad, an administrative manager at the institute, stands inside the school's newly constructed auditorium and lab facility

Bottom Right: The Madaba Institute for Mosaic Art and Restoration has functioned as a fully accredited university program since 2007