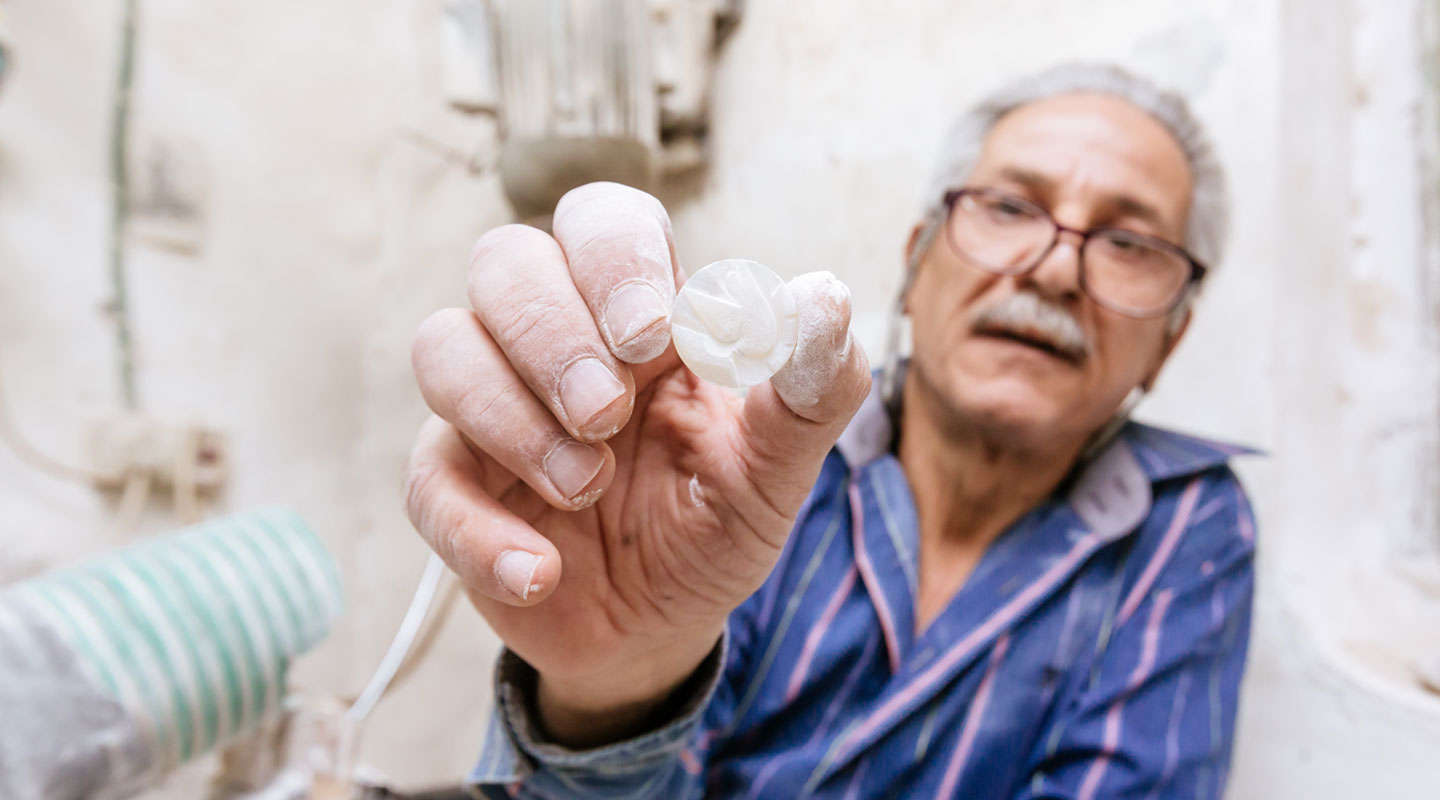 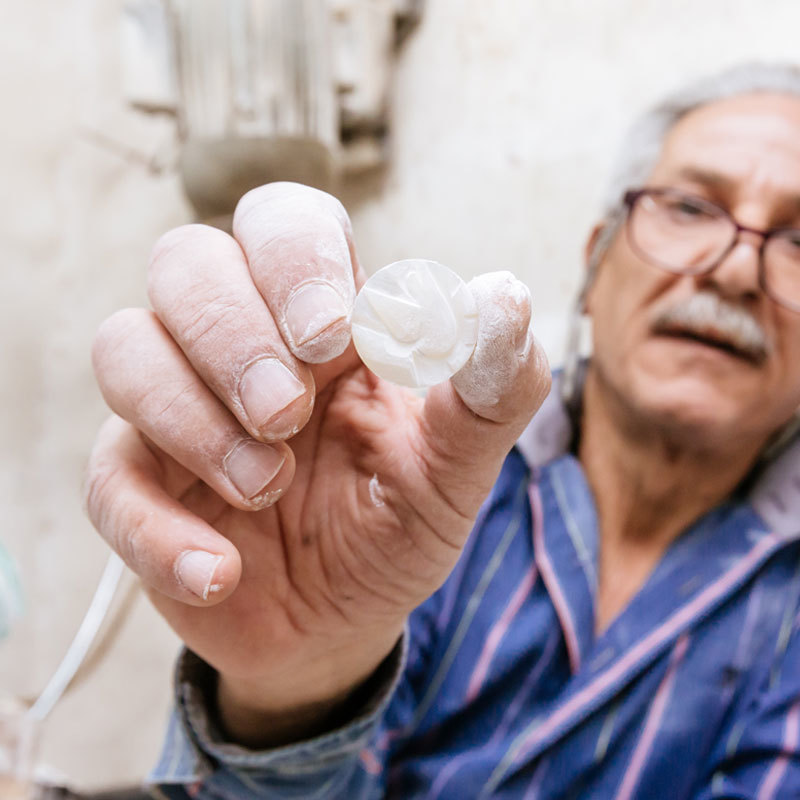 With precision and attention to detail, Bethlehem’s nacre artisans carve religious relics from oyster shells, a craft that has become synonymous with the city.

Bolus Qumsieh spends most days with his hands covered in a fine, white dust. Bent over a low stone workbench, the 62-year old wields a tiny file across a small piece of iridescent shell, swiftly carving lines into its surface. In less than a minute, a dove emerges from the disc, rising from its surface with tiny bursts of white soot. Qumsieh examines it for a moment and, satisfied, sets to work on another.

Qumsieh is one of a small number of craftsmen in the Bethlehem area who works in the increasingly rare medium of mother-of-pearl. In a basement workshop, just down the hill from Bethlehem in the village of Beit Sahour, he and two cousins, Peter Abu Farha and Raed Nabhan, take their cues from hundreds of years of local history – though they do allow for a few modern conveniences to aid in the process.

‘In the past there were no machines,’ Abu Farha explains, taking his place on a low plastic chair in front of something that resembles a very fine circular saw. ‘It was very hard. Maybe in one week, the entire family would make 10 pieces. Now we can make more because of the machines, but it’s still handmade, you see.’ 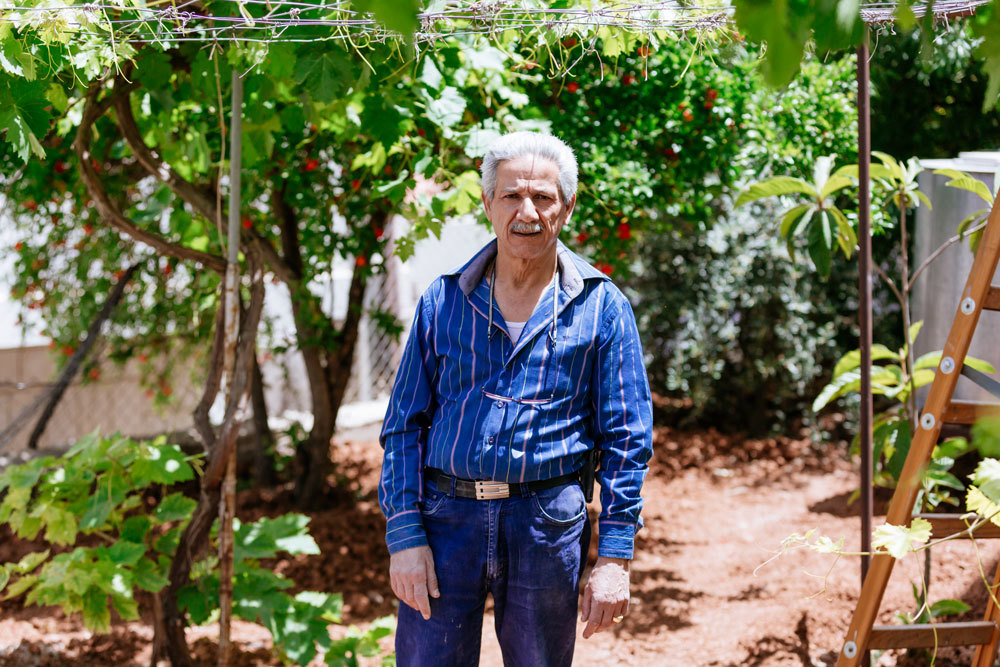 The owner of the workshop, Bolus Qumsieh 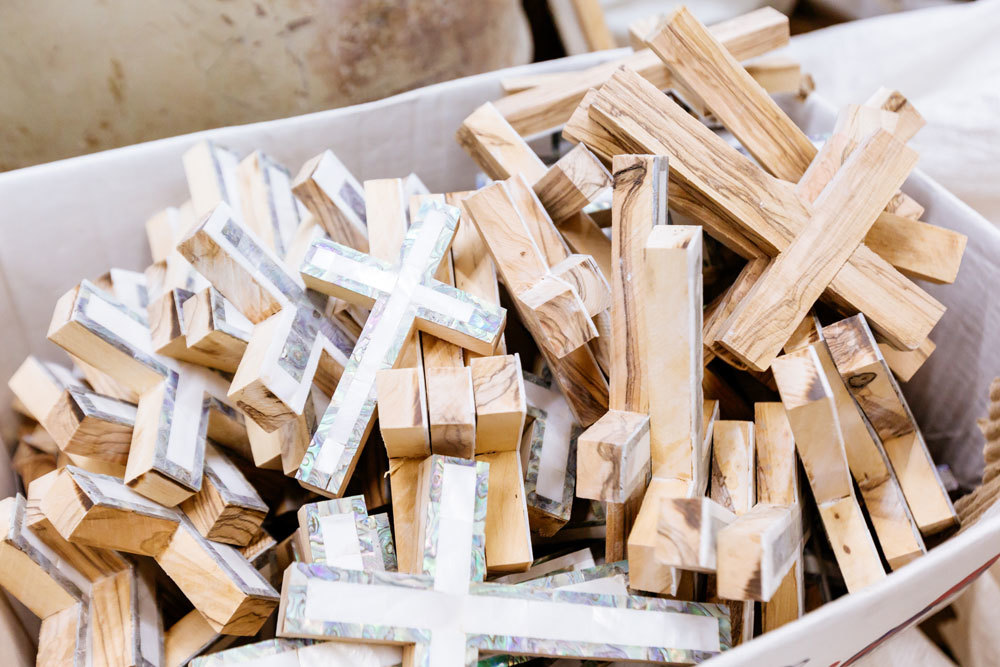 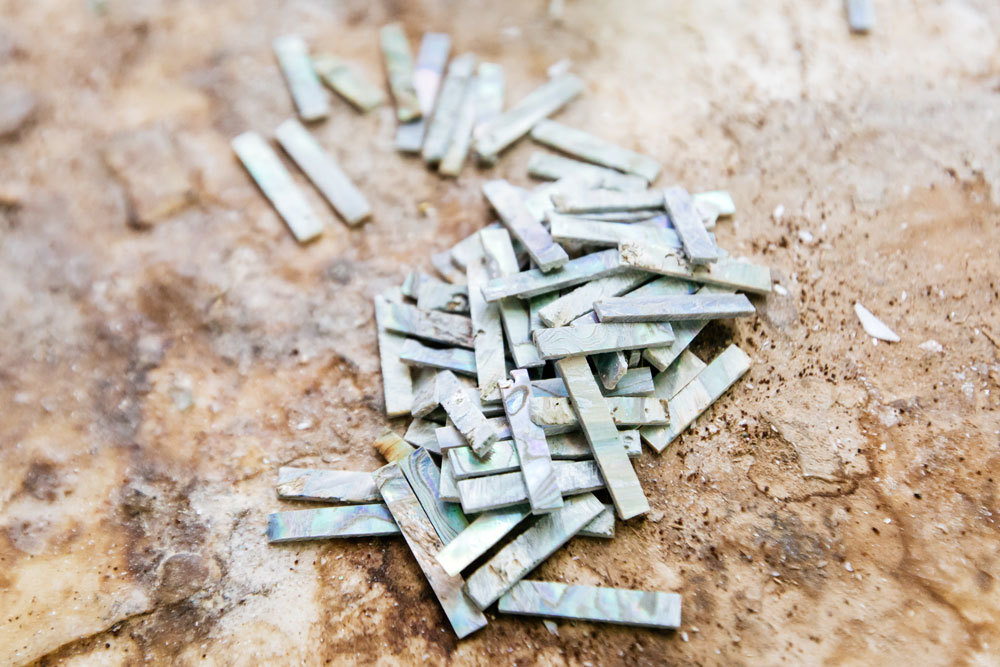 Mother-of-pearl craftsmanship has been an integral part of Bethlehem’s cultural and economic landscape since the 14th century, when Franciscan friars arrived in the small pilgrimage town renowned as the birthplace of Jesus. The Christian order helped to establish a local handicraft economy that catered specifically to pilgrims eager for Holy Land souvenirs. The ivory lustre of mother-of-pearl, or nacre, taken from the inside of oyster shells, aligned with the sacred nature of the religious relics – crosses, scripture scenes, church models and rosaries, carved with or ornamented by mother-of-pearl – became the basis for Bethlehem’s blossoming trade industry. 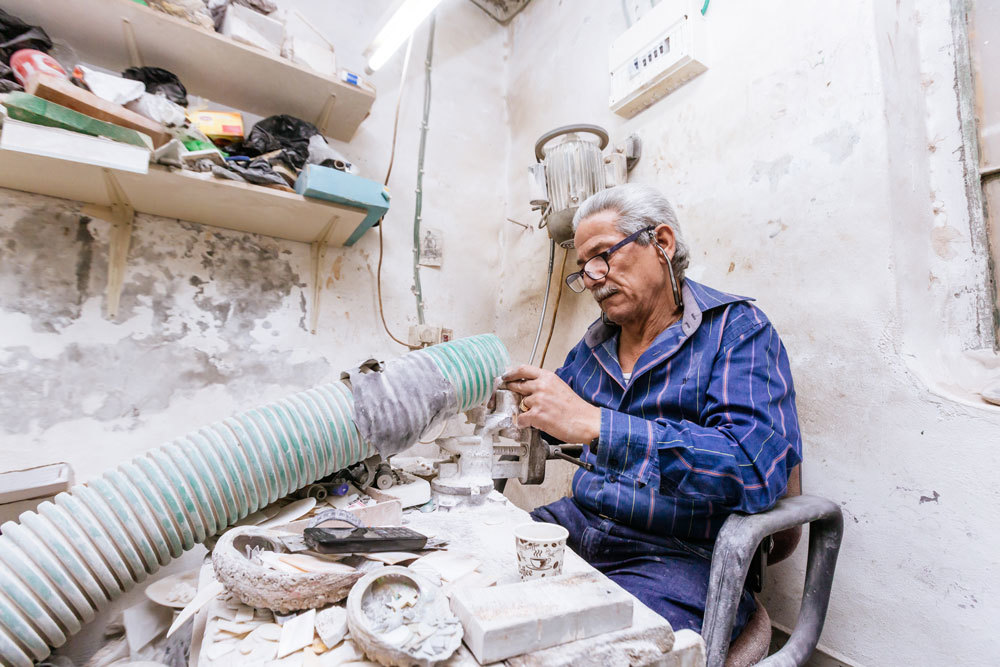 Qumsieh, the most senior in the workshop, surrounded by tools and pieces in the making

By the 19th century, demand for the delicate and polished carvings was at its zenith, and artisans moved from their homes to proper workshops, some of which hired up to 50 craftsmen and women. Despite the fact that the actual nacre shells were brought over to Palestine from the Red Sea, mother-of-pearl had become synonymous with Bethlehem.

Today, the Qumsieh factory gets their mother-of-pearl from Australia, and it comes to them in original shell form. Sacks of dusty shells are hidden under workbenches in the small carving room, and Abu Farha has two in his hand as he sits down to begin the carving process.

‘We have the white kind and the green kind,’ he says, displaying the two shells, one reflecting ivory in the harsh fluorescent light and the other gleaming with greens, magentas and silvers. ‘It’s around 25 US dollars for one kilogram, and this shell is almost a half kilo. It’s very heavy and also there’s a lot of dust on it, so you see we lose a lot of money because of this.’ 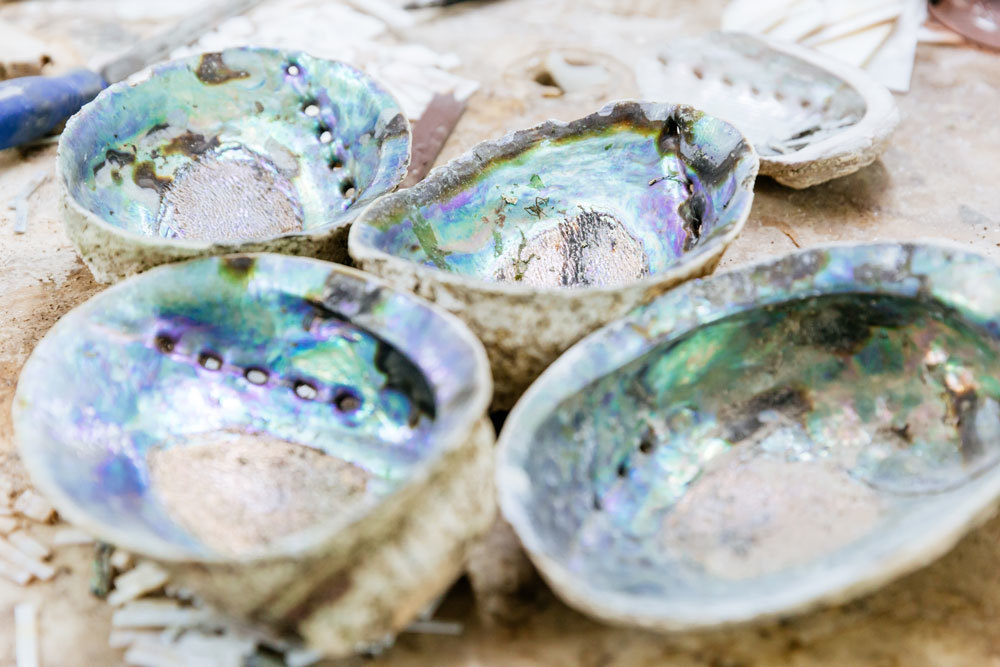 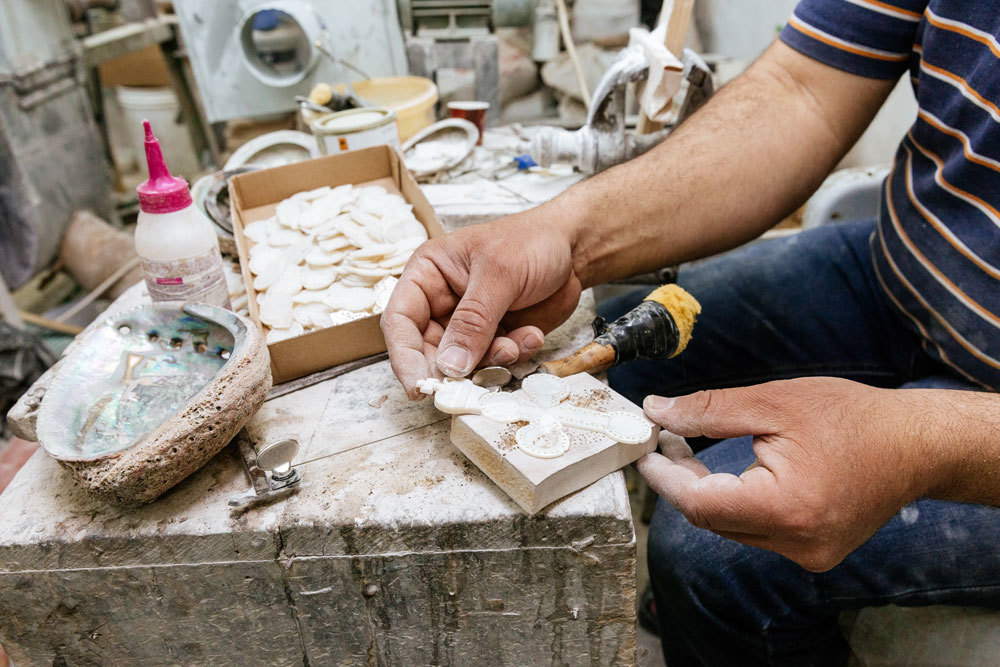 Top: The two types of nacre used in the Qumsieh workshop hails from Australia; this is the raw aquamarine nacre, still as intact shells
Bottom: Many small pieces of mother-of-pearl, all individually carved, make up the Cross of the Patriarch, typically worn by high ranking priests, strung on a necklace made of beaded mothers-of-pearl

As Abu Farha sets to work on step one of the carving process – shaving the outer shell husk from the milky inside – it’s clear that, at those prices, nothing goes to waste. He takes a small, filigreed cross, no bigger than his thumb, and traces its size directly onto the shell. The circular saw cranks to life and he expertly navigates around the tiny ink marks, until he has the shape of a chunky cross.

After buffing the piece with another round file, Abu Farha hands the cross over to Qumsieh. ‘He’s been doing this for 50 years,’ he says. ‘He’s the master.’

About 20 years ago, Qumsieh upgraded his equipment from simple hand tools to electrical ones, but his carving skills are no less impressive for it. He takes a small mechanical file and soon, the cross is rounded and three-dimensional, almost pillow-like in its segments. A round cookie tin, rusted and stained, holds 20-odd carving attachments, some which create small, symmetrical holes, others which allow for the tiniest of lines. 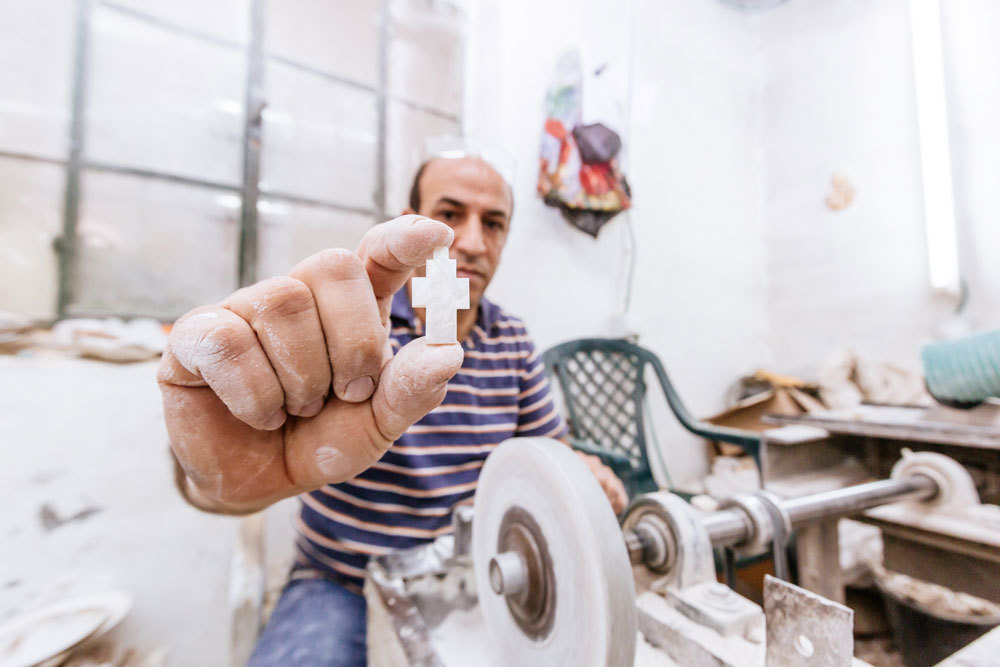 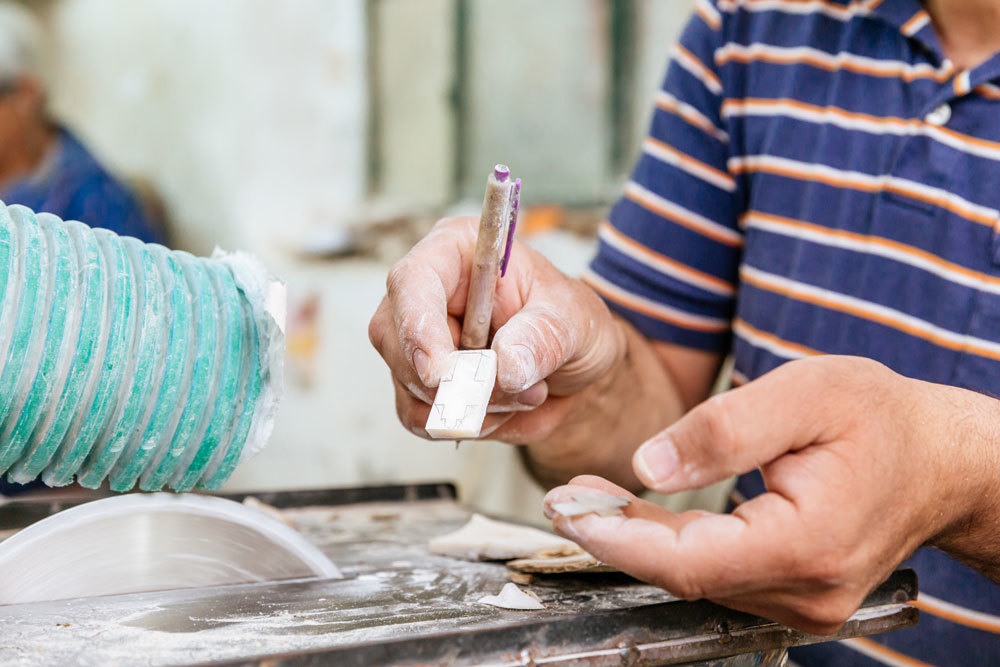 Top: Peter Abu Farha, one of the artisans, with a small piece of nacre in the shape of a cross
Bottom: Working with mother-of-pearl means paying close attention to details

‘It’s a lot of stages for one small piece,’ Abu Farha says as he gestures to the next room. Inside, a mixture of acid and water is added to the finished pieces, making their edges soft and the mother-of-pearl start to shine. One final buffing session with a soft white rag, and the cross is ready to become someone’s souvenir. 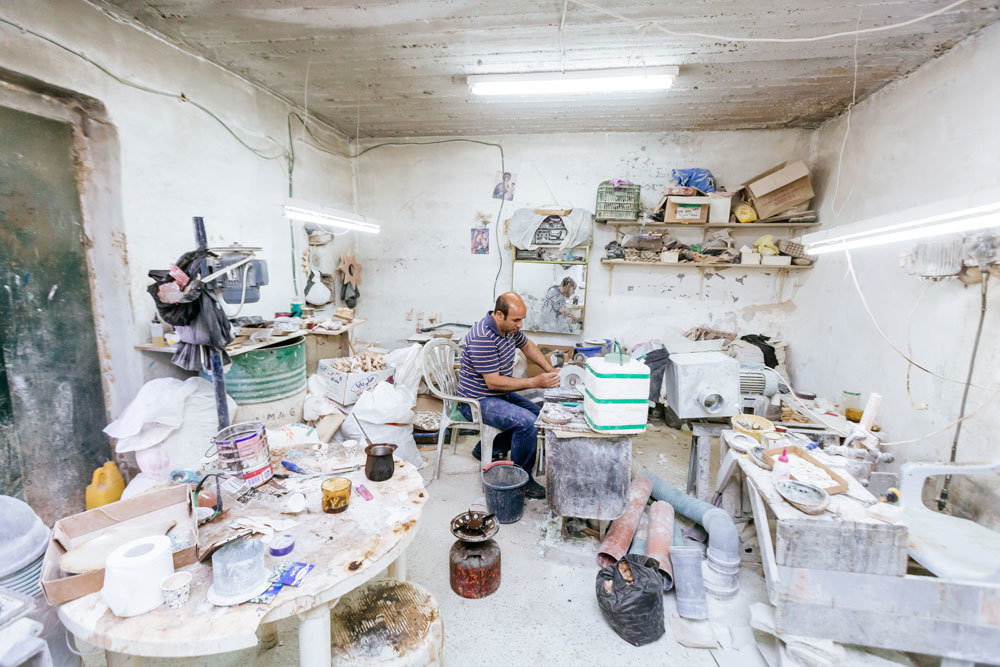 In the small carving room, Abu Farha polishes a small cross to bring out its shine

The Qumsieh workshop is just one of three left in Bethlehem, the result of a more globalised economy and depleted tourism industry. Still, Qumsieh caters directly to the churches in Bethlehem and Jerusalem, adorning crosses for various Christian denominations in Palestine and abroad. They also work with local olive wood craftspeople, inlaying mother-of-pearl into sculptures of all kinds. Earrings, necklaces, charms and brooches are sent to Europe and the United States for Christmas and Easter. Business may not be as booming as it was in the 19th century, but despite reservations about the future of his craft, Qumsieh maintains a sense of humour.

‘These days, it’s very hard to find someone who works like this,’ he says, running his hand along the inlay of an ornate cross. ‘You need good taste and no one wants to take a lot of time to do it, no one wants to wait.’

‘After I die, I think it will disappear, because people want to make money very fast, and they don’t want to take the time. But…’, he pauses and smiles, ‘I’m still young.’ 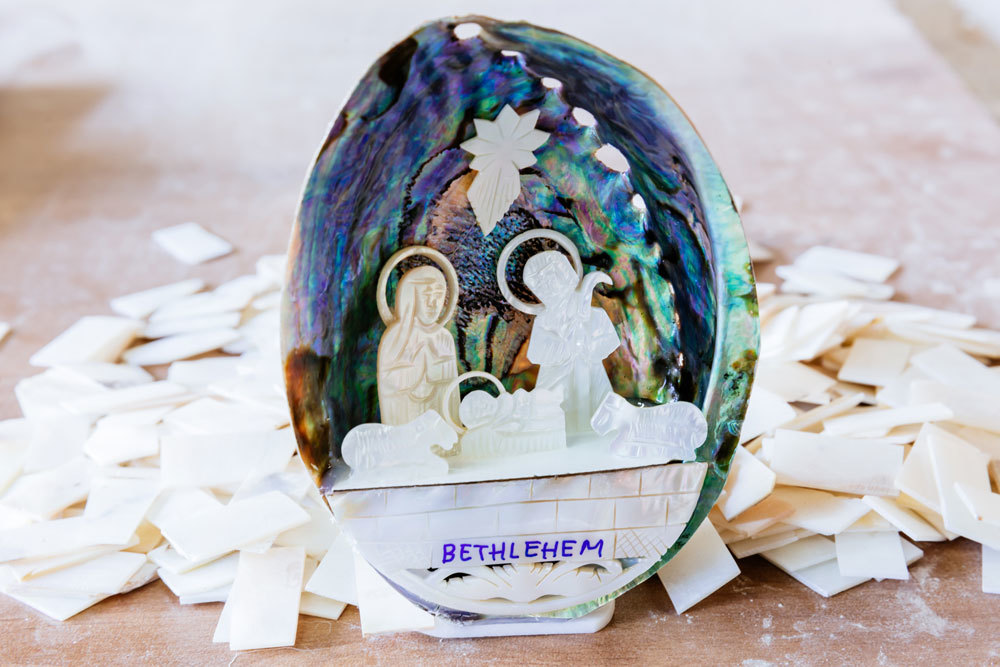 A small nativity scene, ready to be sold both locally and abroad