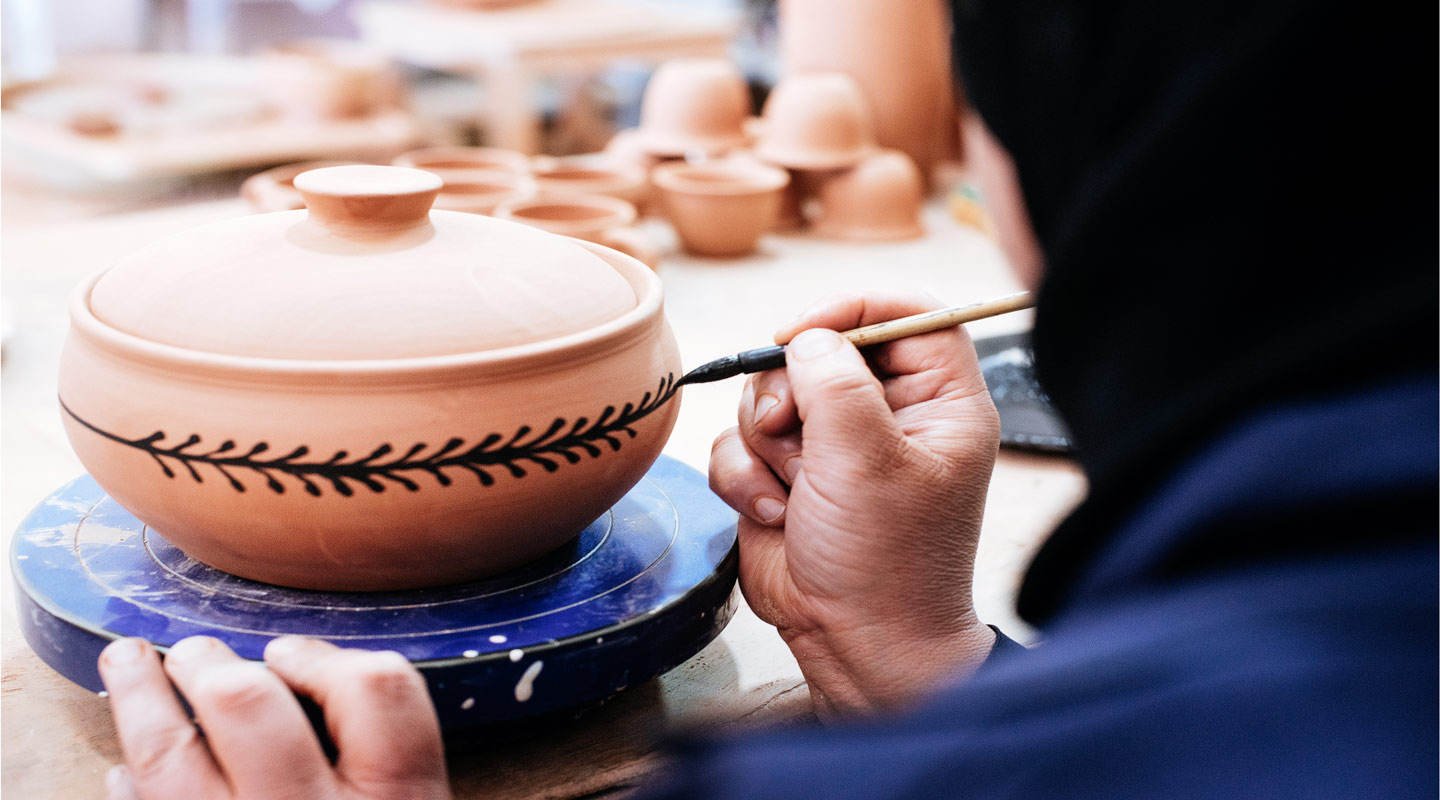 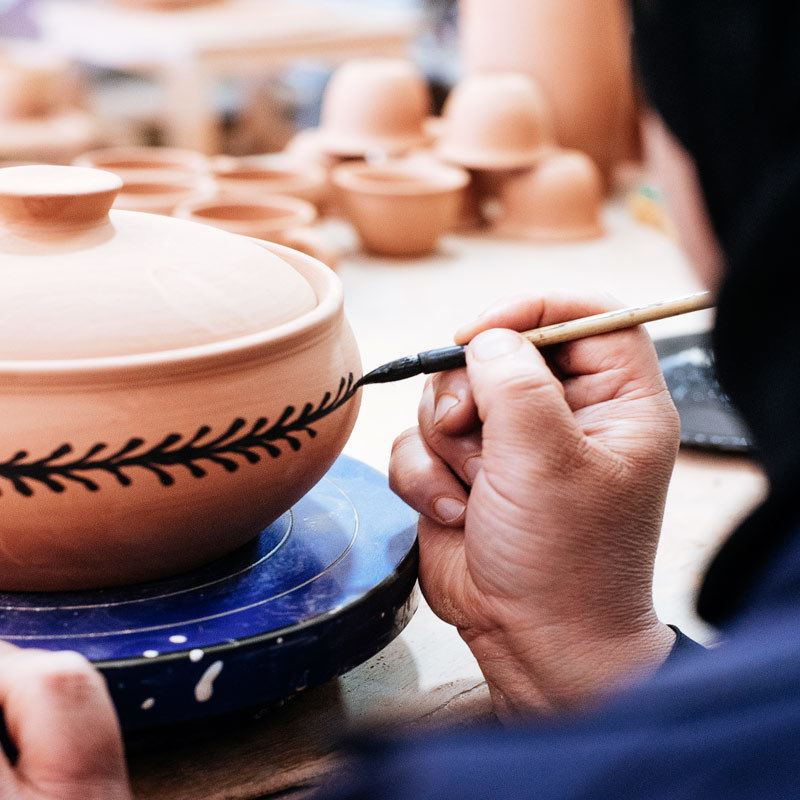 In Petra, artisans create earthenware with raw material from the surroundings – just like Nabatean craftspeople did millennia ago.

Wedged between cliff-hugging homes in the southern Jordanian village of Taybeh, Petra Pottery Association is filled with the earthy atmosphere of dirt and heat. Mersar Ahmad pulls on the sleeves of an overall, speckled with deep red clay, as she heads into a wide workspace, illuminated by the scorching mid-afternoon sun.

Around the 41-year-old potter, neat shelves house rows of clay bowls, plates and urns, their rust colour matching the spots on her work garb.

‘From collecting the raw material to creating the final product, every step is done here,’ she says, pointing at the outside expanse.

Just some 10 kilometres from Petra’s site, the storefront and its adjacent workshop have loomed over the ancient city for over a decade. Today, a handful of women maintain the pottery techniques that were forged millennia ago, by its Nabatean founders. 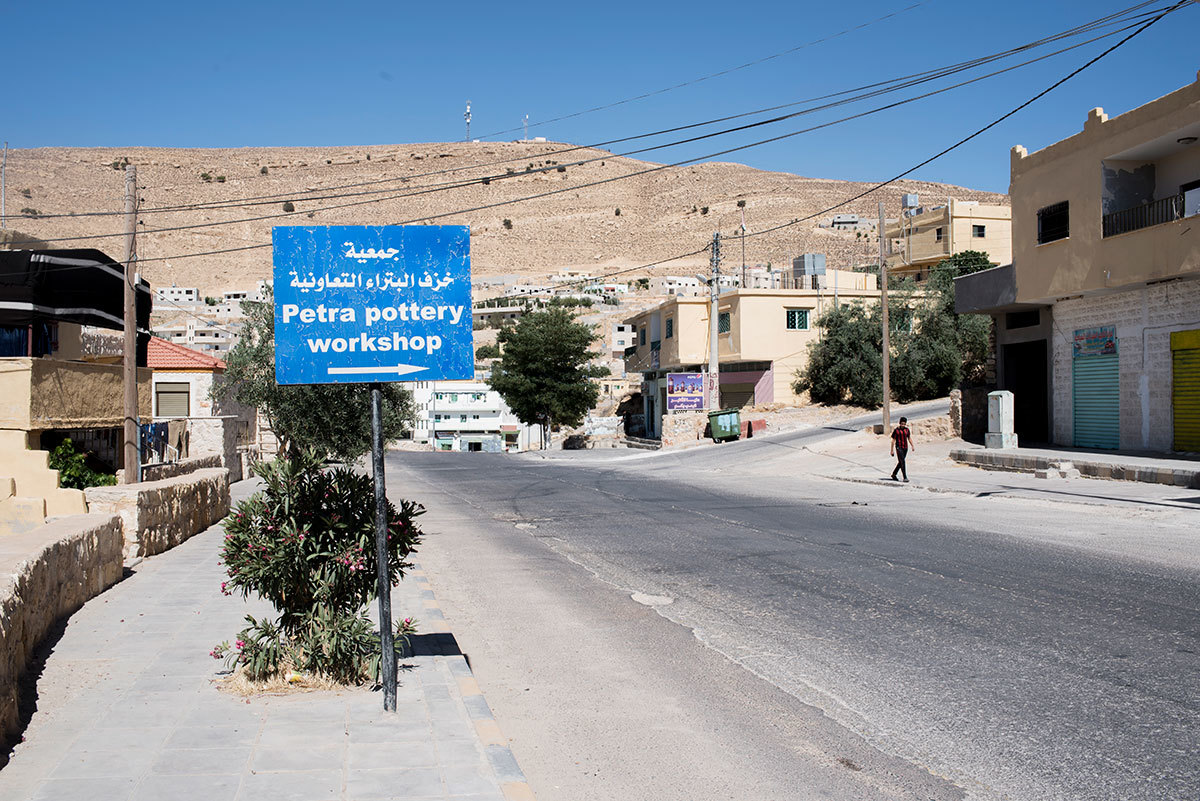 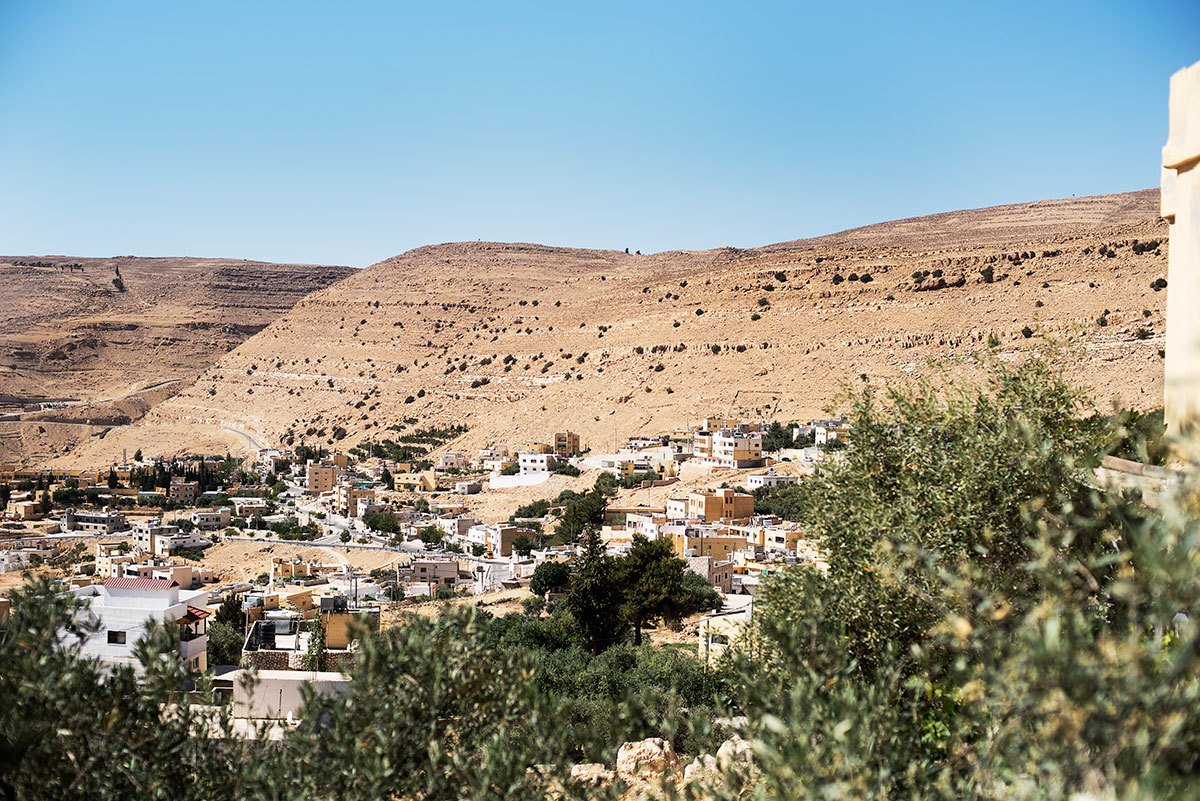 The view from outside the Taybeh studio

Initially a nomadic tribe, the Nabateans went down in history for their astounding monument city, which served as the capital of a trade-rich kingdom stretching from Damascus, through the majority of present-day Jordan, into southern Palestine and the Sinai.

Still, Petra remained unknown to the outside world for about five centuries, before being written about by Swiss explorer Johan Ludwig Burckhardt in 1812. His adoring prose described its striking ‘blush of dawn’ hue forming a stark contrast to the grey stone used by the Greeks and Romans.

Just like the lost city of Petra, the Nabateans’ ancient pottery technique was shrouded in history.

‘This bronze, pinkish hue is typical of the clay found here,’ says Ahmad, picking up a chunk of stone and dense soil from underneath the table. ‘This is from our mountains, you can tell from the colour.’ 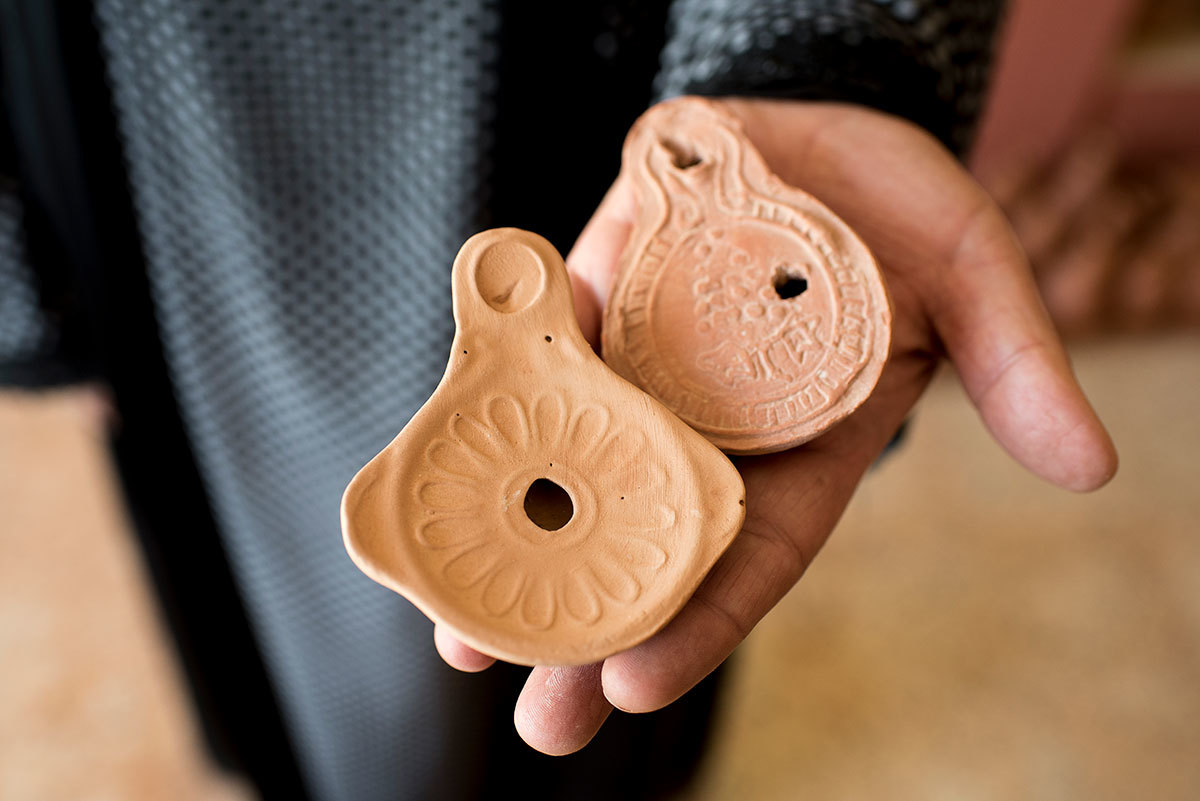 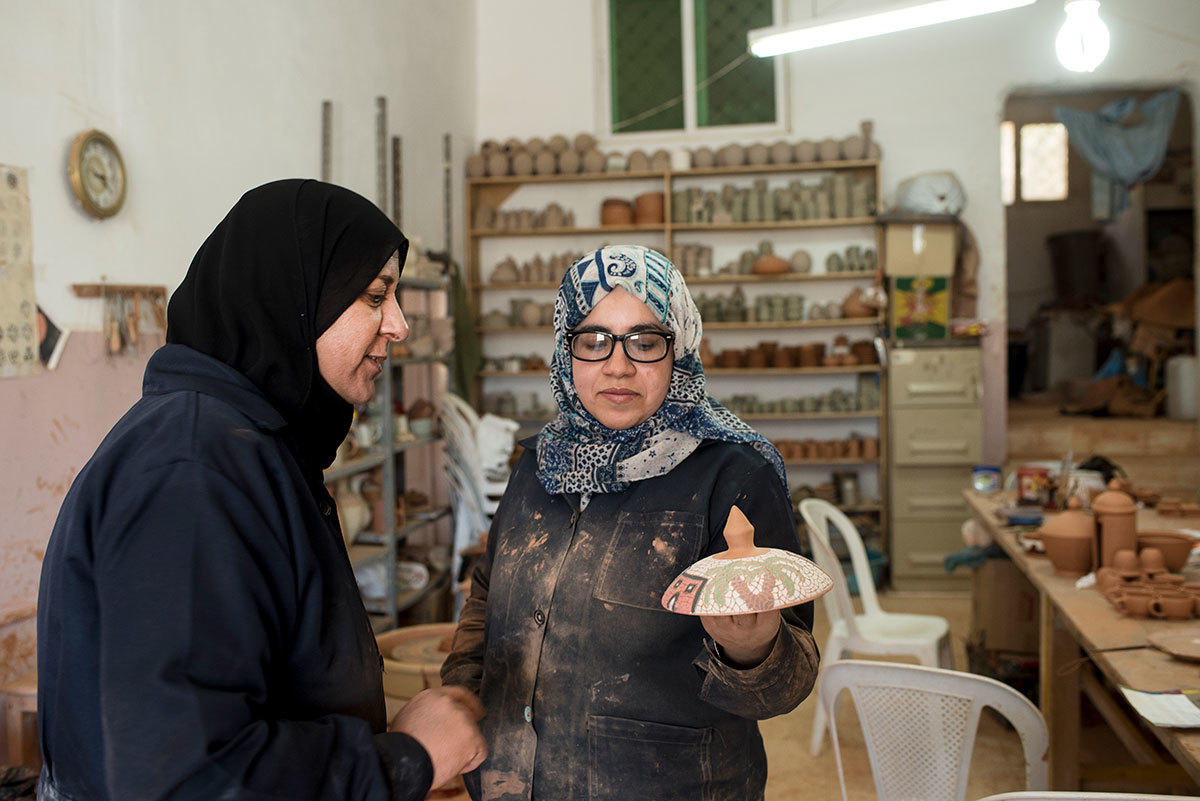 Top: Mersar Ahmad holds two pieces stamped in a typical Nabatean style. The flat, winged pieces were used as lanterns and lit with a textile wick

The Nabateans’ architectural prowess is showcased in the robust, rock-carved dwellings dotting their capital’s surroundings. Their pottery, on the other hand, is admired for its delicacy.

Mirroring the ancient artefacts, Ahmad’s ceramic urns, bowls and vases have walls as thin as 1.5 millimetres, barely thicker than an eggshell. 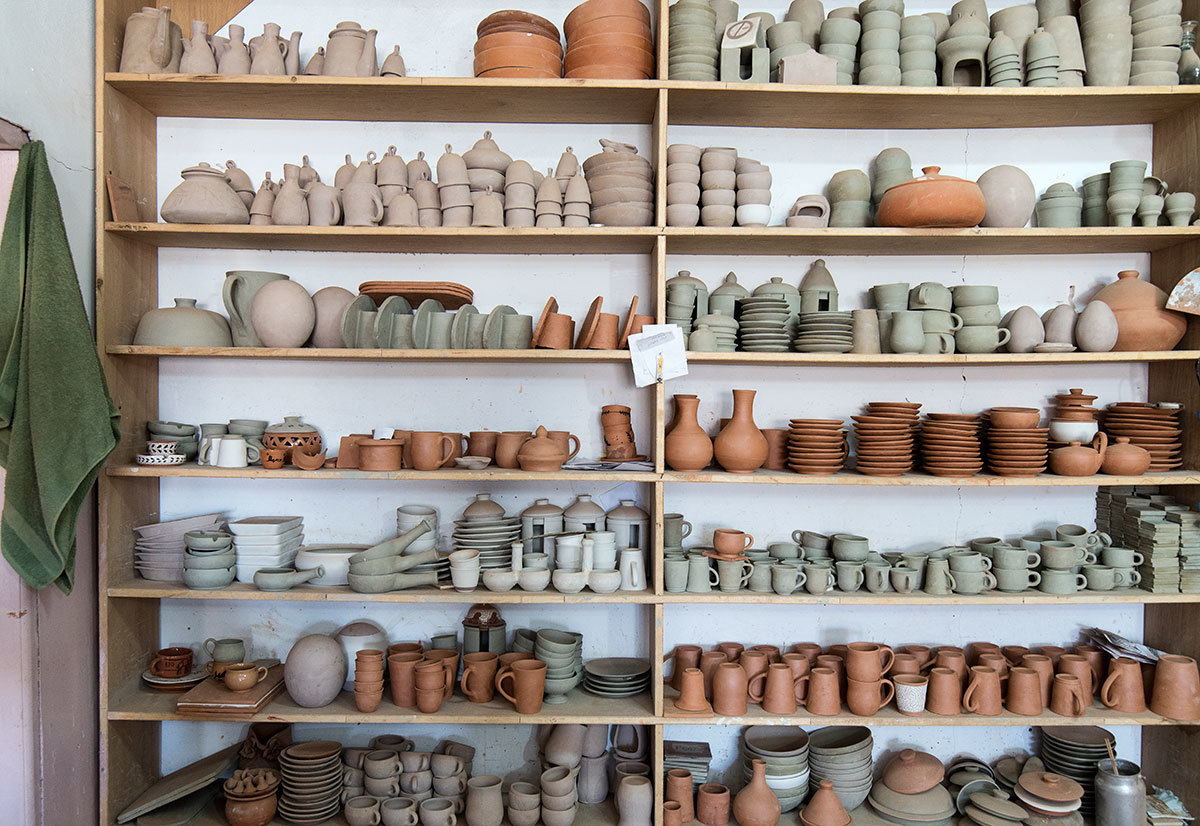 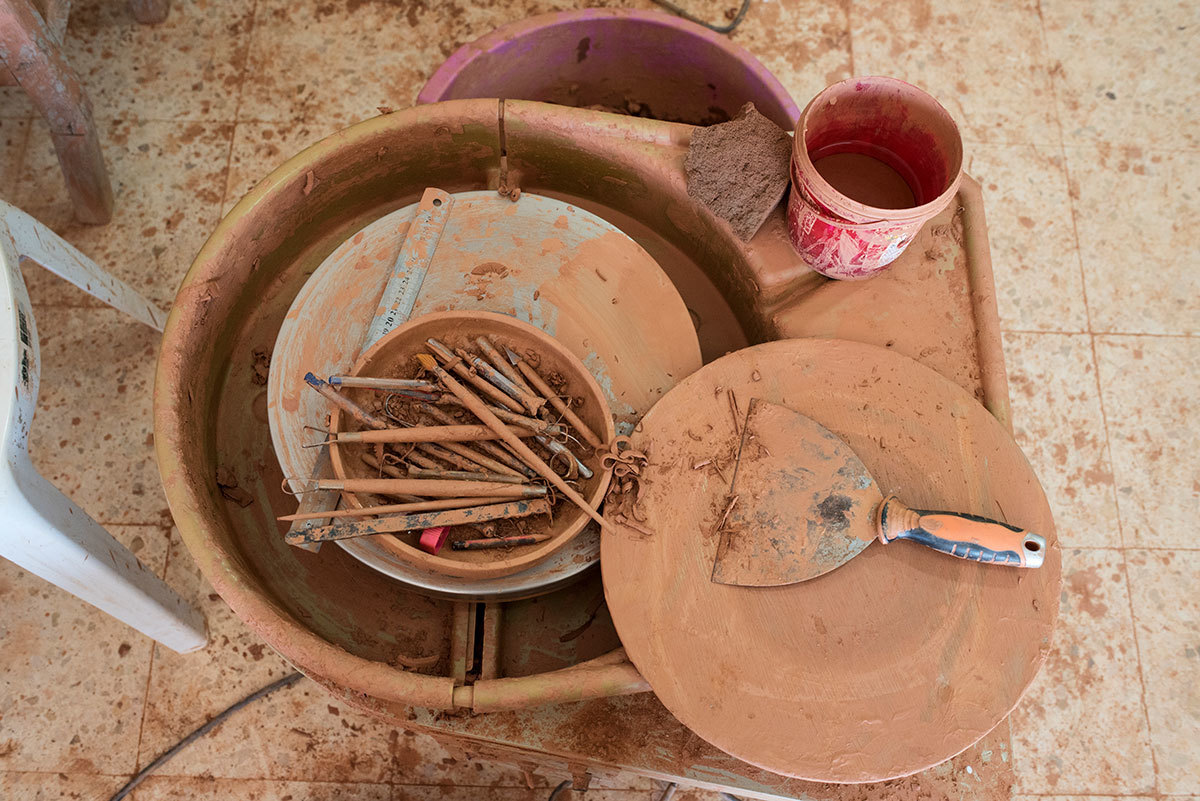 Top: Dips in foreign tourism over the last several years has driven the potters to start throwing other, more modern, forms. The green and pale pieces are made with import clay rather than the red material found around the area

She says she learned the technique fresh out of high school in 1993, when a pottery expert from Amman began offering workshops to local women. ‘I didn't want to study at university so I thought: why not have a look?’ she smiles. ‘I took the course, and it turned out I was very good.’

Along with a few other women from the class she tried to continue, but community interest in the meticulous technique soon lagged. Ten years later, only a few of the original trainees remained.

‘Our trainer was very good, but he was coming and going, we needed to be persistent to master this work, which is an uncommon thing these days,’ she says. ‘We even looked at pictures and books at the museum to fill the gap.’ 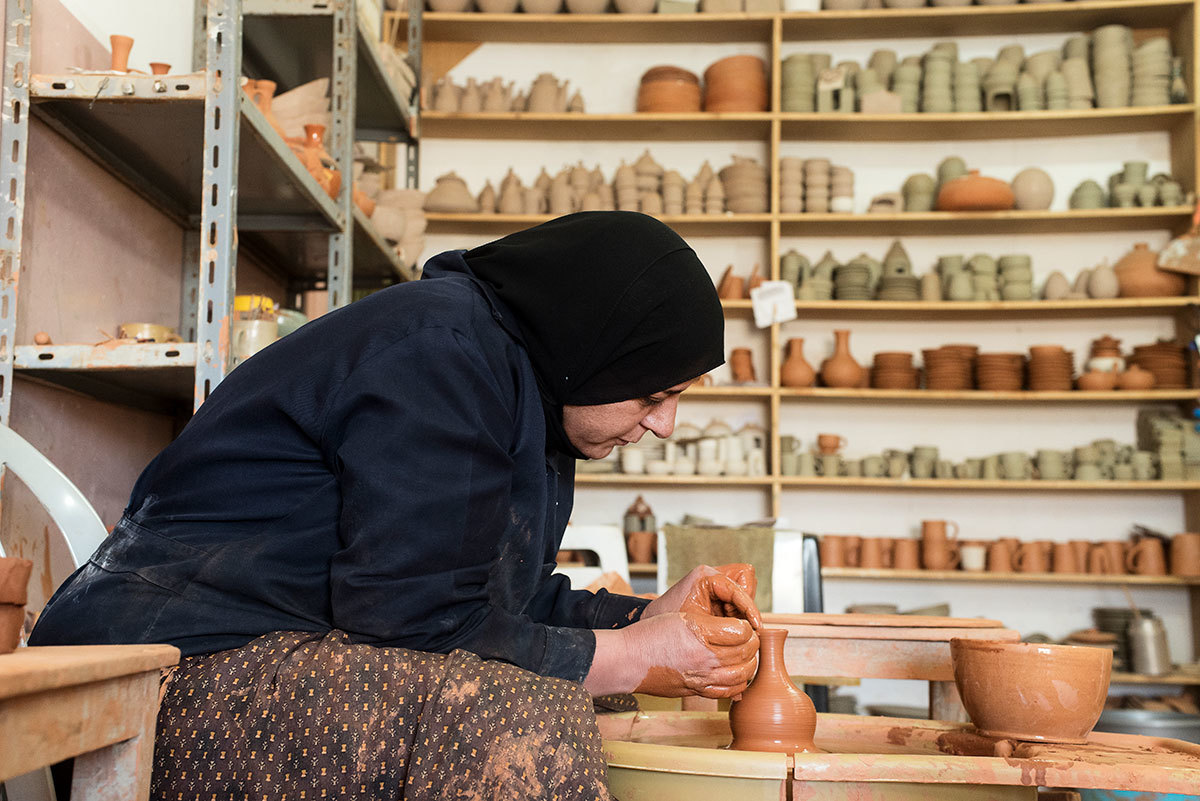 Ahmad puts the final touches to the lip of a vase

They got a second chance when, in 2005, they joined the Women’s Society of Taybeh and decided to open the studio. By 2008, they had been able to attract funding, and now house two firing kilns, three wheels and seasonal workshops for locals.

Ahmad and the other artisans hike to the surrounding mountains every few weeks to hunt down the raw material, essentially the same process that Nabateans followed during their bustling empire in 4th century BC.

‘But back in their day, our ancestors did not travel far to get this material. The clay would be carried naturally by water streams into the valley of the city,’ she says. ‘The clay is what makes Nabatean pottery Nabatean.’

After collection, the material goes through a weeklong preparation process. Ahmad gestures to a large metal funnel splattered with paling dirt: this is where raw mountain clay is loaded and immersed in water. A day later, the entire mix is drained and sent through a fine metal sieve to filter the pure clay. 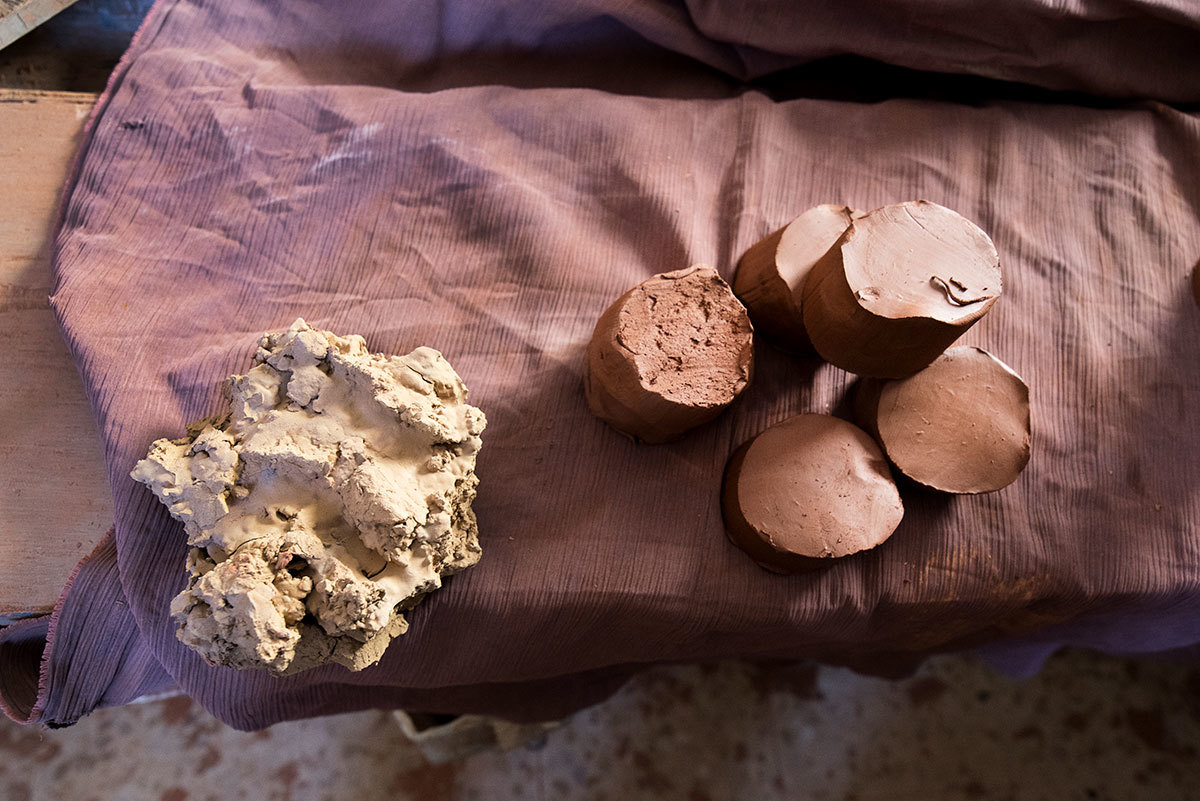 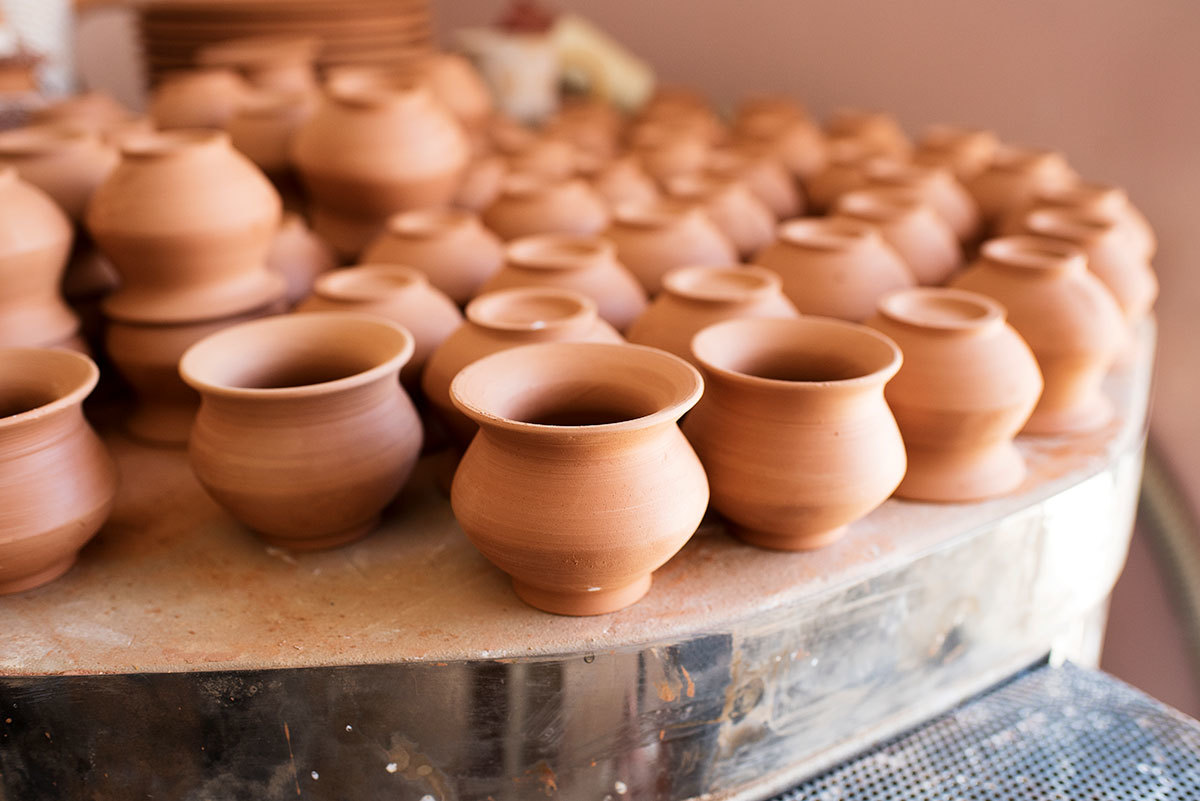 Top: It takes roughly a week for the raw mountain clay to be cleaned, sieved, dried and pressed to a state that's wheel-ready

Bottom: Palm-sized pots await firing next to the studio's window

She picks up a plastic bucket filled with thick, clouded water, a smooth red lump resting just below its surface.

‘After four days of settling, the water rises and the pure clay stays below. Then we drain the water into another bucket and take it away.’

Ahmad pats the cool metal surface of a heavy instrument, sitting just across the room.

‘This is the press,’ she says. ‘The clay comes out from it like a sausage – dense and entirely free of water and air.’

An apprentice heaves the device’s grip downward to move two metal slats. Below, a rich rouge tube of clay emerges. 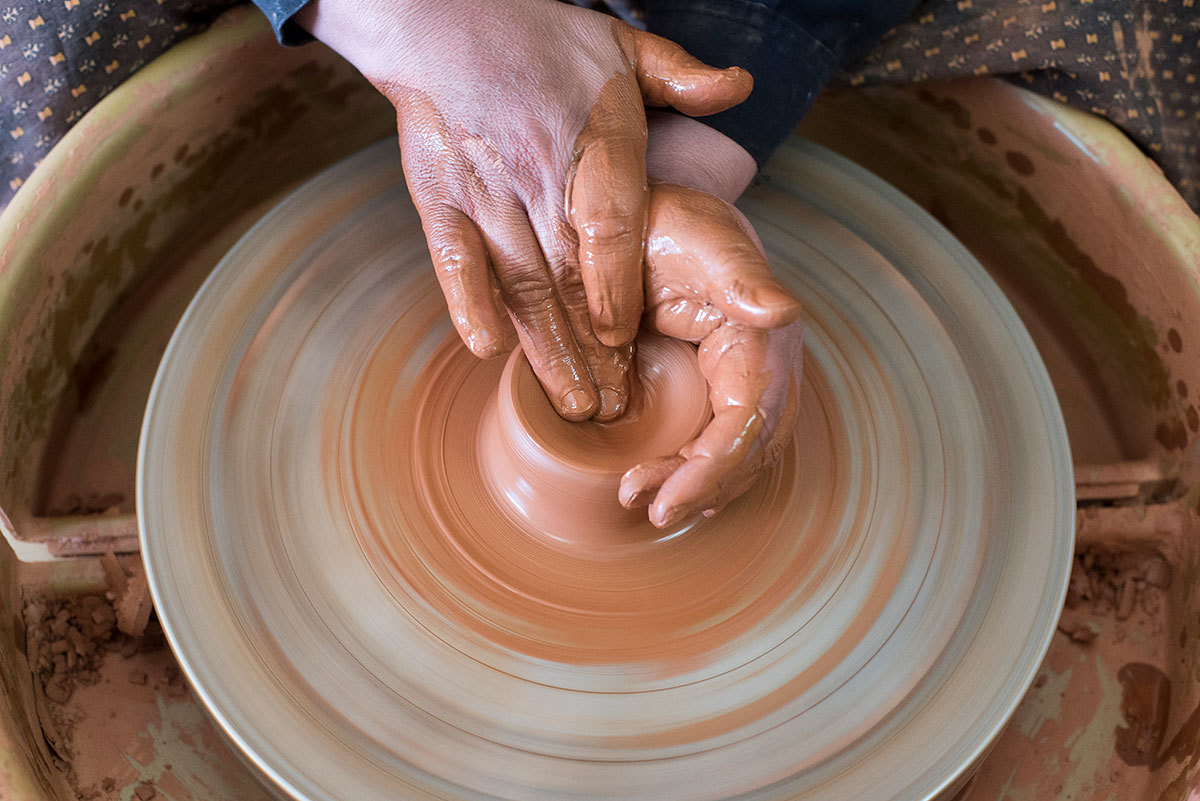 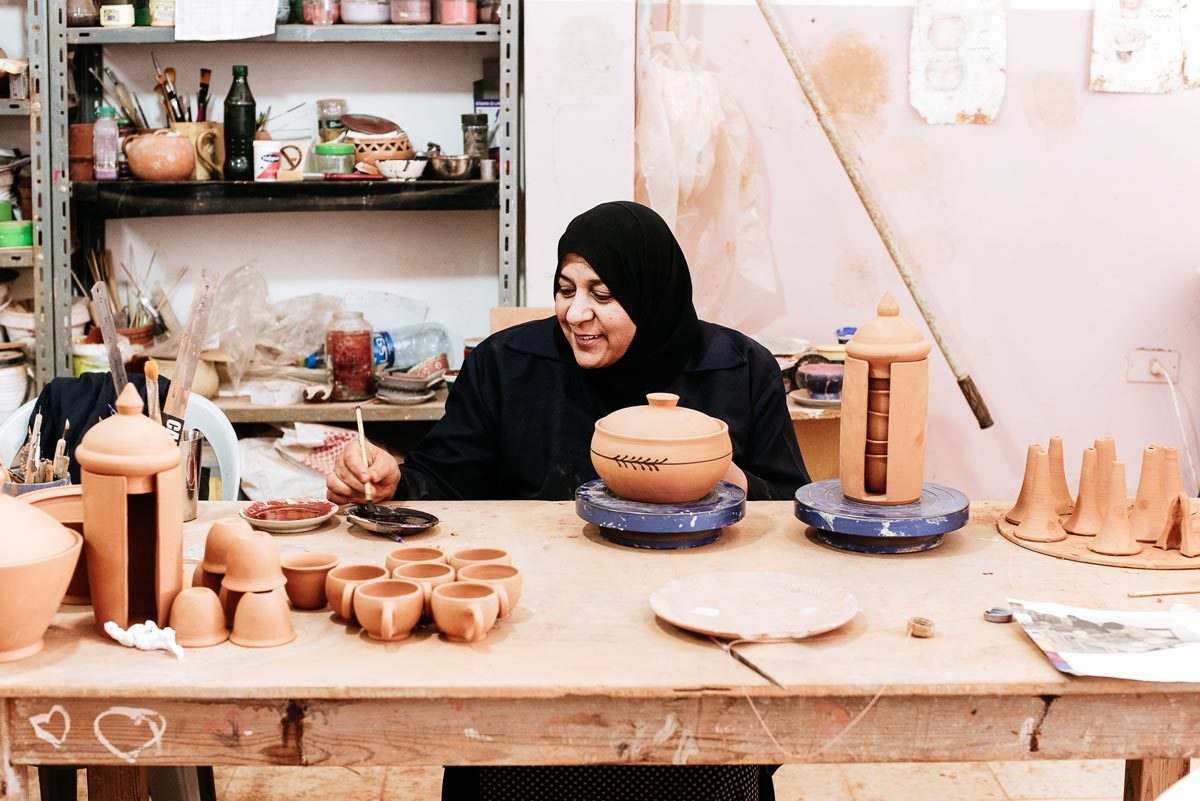 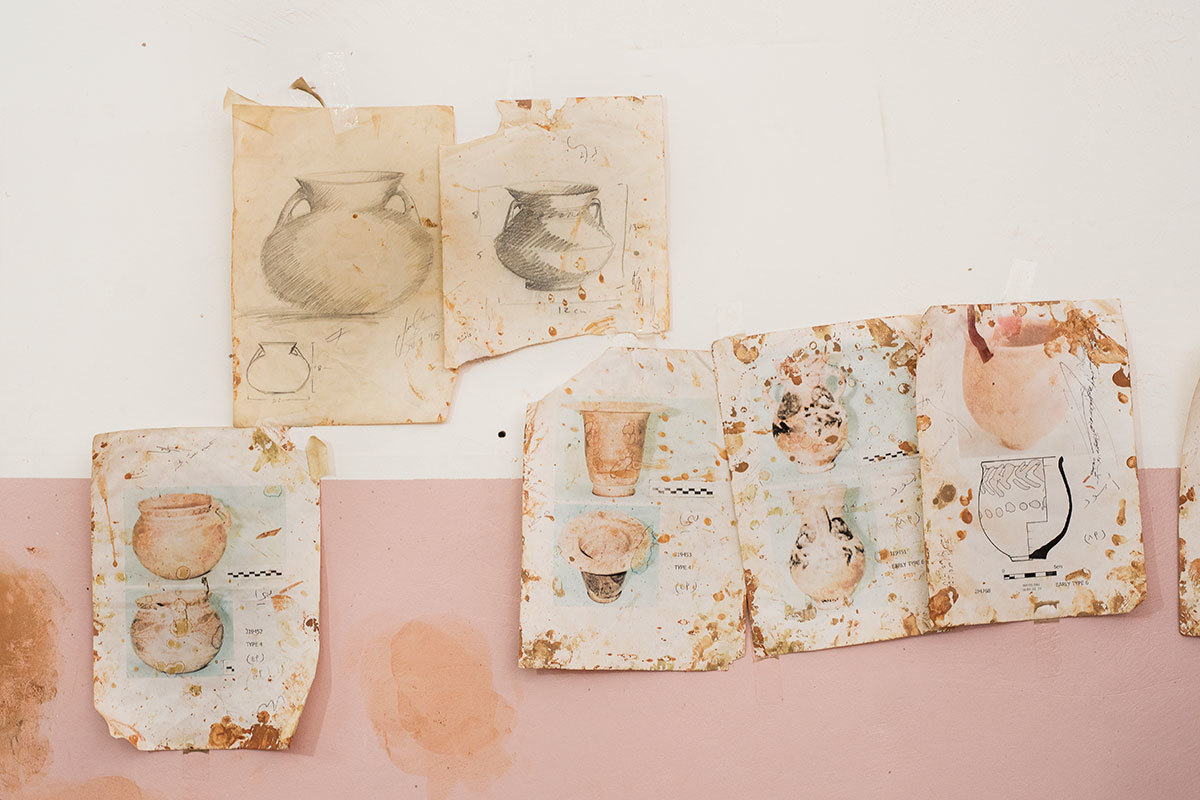 Top: Ahmad prepares the base of what will become a tiny, Nabatean-style vase

Middle: Using an iron-oxide solution, Ahmad paints a leaf pattern on a pot

Bottom: Dips in foreign tourism over the last several years has driven the potters to start throwing other, more modern, forms. The green and pale pieces are made with import clay rather than the red material found around the area

Today, the workshop is the last beacon of the fine pottery ware. Famed for their lightness and finesse, the historical earthenware would serve as mere household staples to the Nabateans.

Ahmad shifts her weight on a stool, her eyes fixed on a vase forming atop the workshop’s spinning potter’s wheel. Her hand moves slowly upwards, sculpting the damp clay into a tubular neck. Finally, two fingers splay outward to form the vase’s delicate lip. It will dry for two days before the handle and base are attached – then, it will be given deep onyx details with paint produced by iron oxide, fired in the kiln and finally taken to the storefront next door. Ten days have passed since the process began. 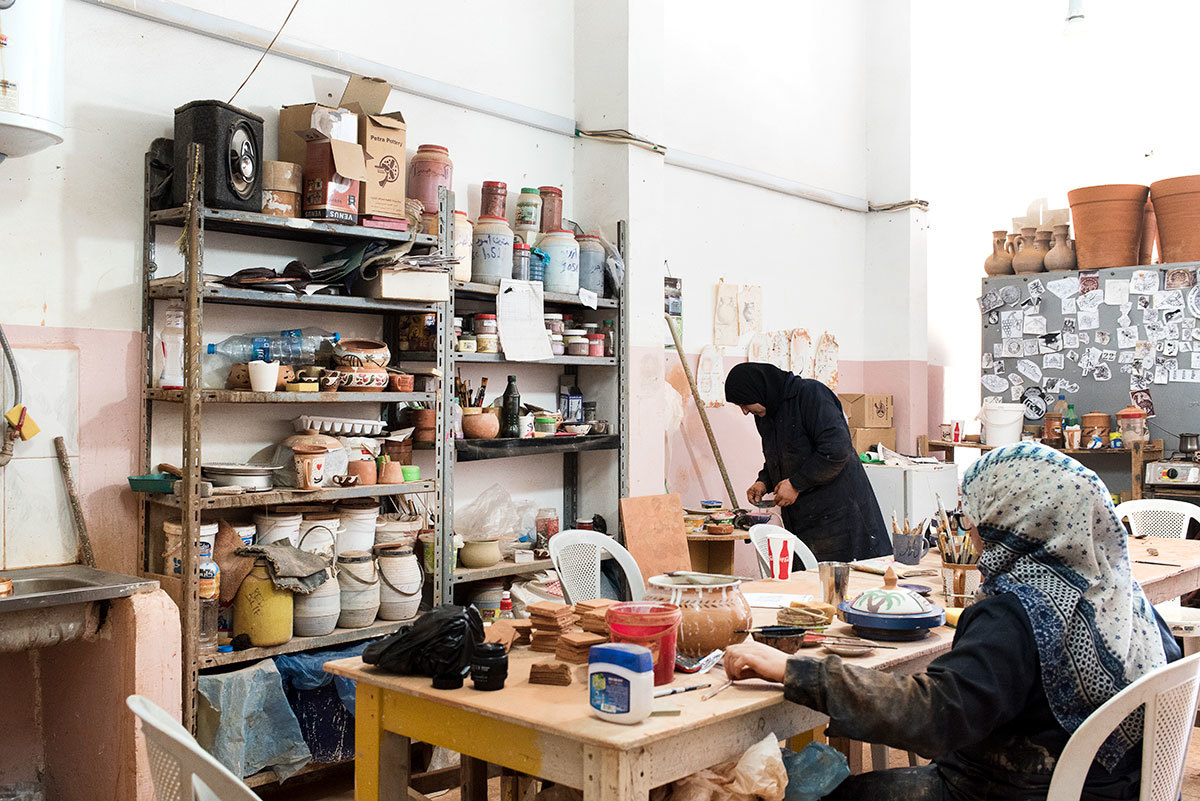 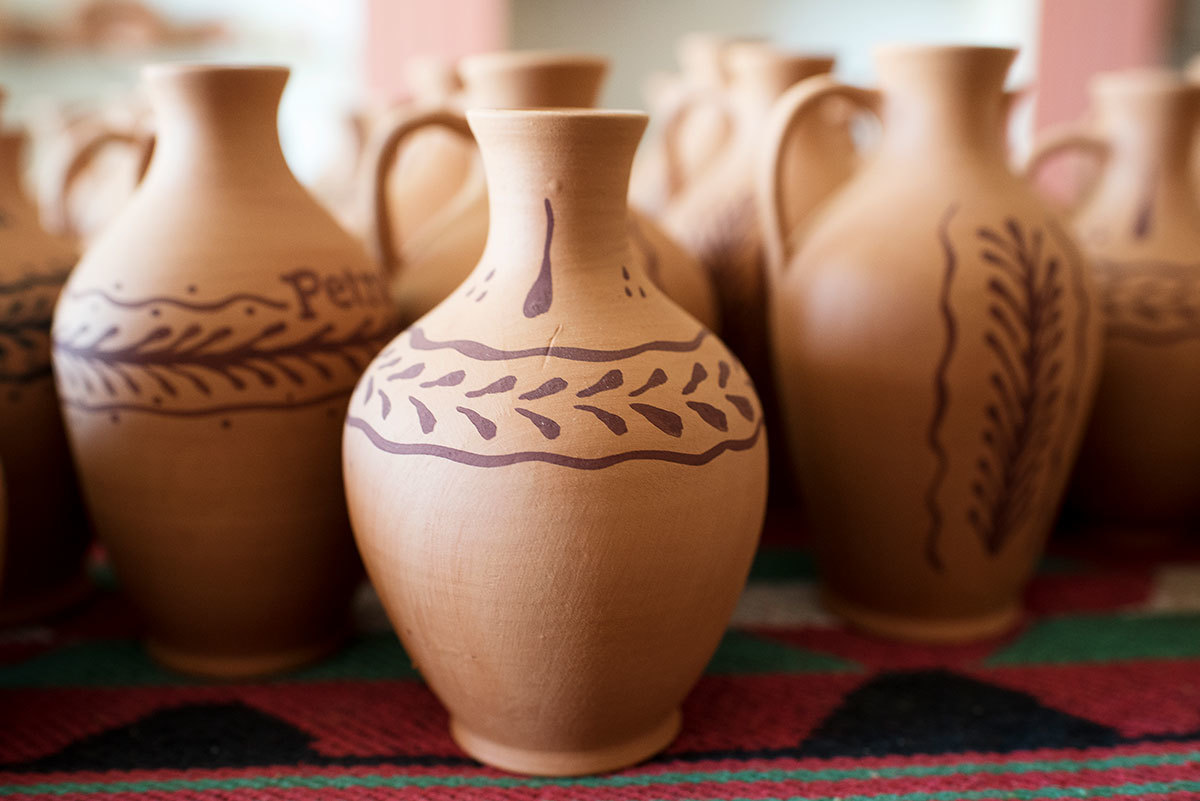 Top: When the studio first started in 2005, it ran on a shoestring budget with help from the local women's association. Today it offers workshops and sells handmade goods

Bottom: Vases and jars in classic Nabatean style. The shape is thrown on the wheel and dried out for two days before a handle and thick base are attached

One of the world’s last practitioners of this specific technique, Ahmad admits that she is unsure where its future lies. Regional turmoil has sunk Petra’s once-booming tourism industry and spiked local unemployment. But Ahmad and the others have broadened their scope to match new demands – they now produce modern pottery laden with ceramic murals and glossy finishes.

Still, Ahmad is firm. She prefers the Nabatean originals.

‘This is my passion,’ she says, while rotating a treaded urn in the palm of her hand, its belly perfectly symmetrical. ‘This pottery tells the story and history of my people; if there’s no past, how can we have a future?’ 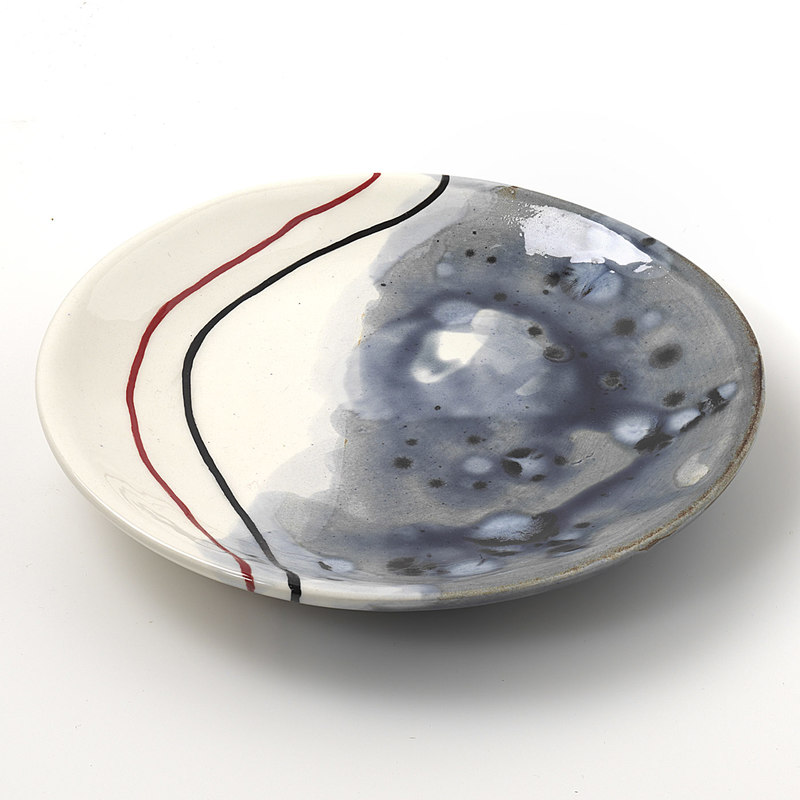