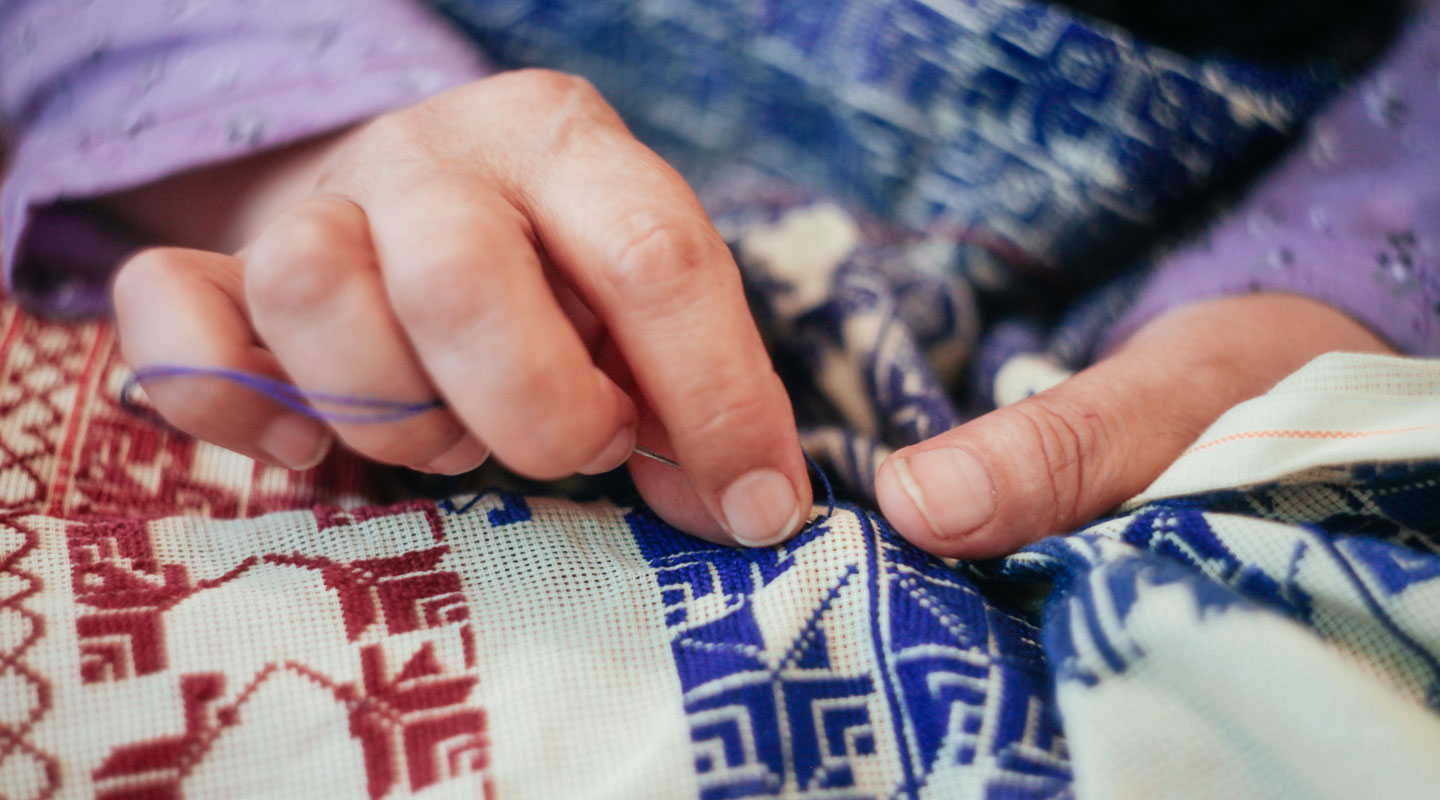 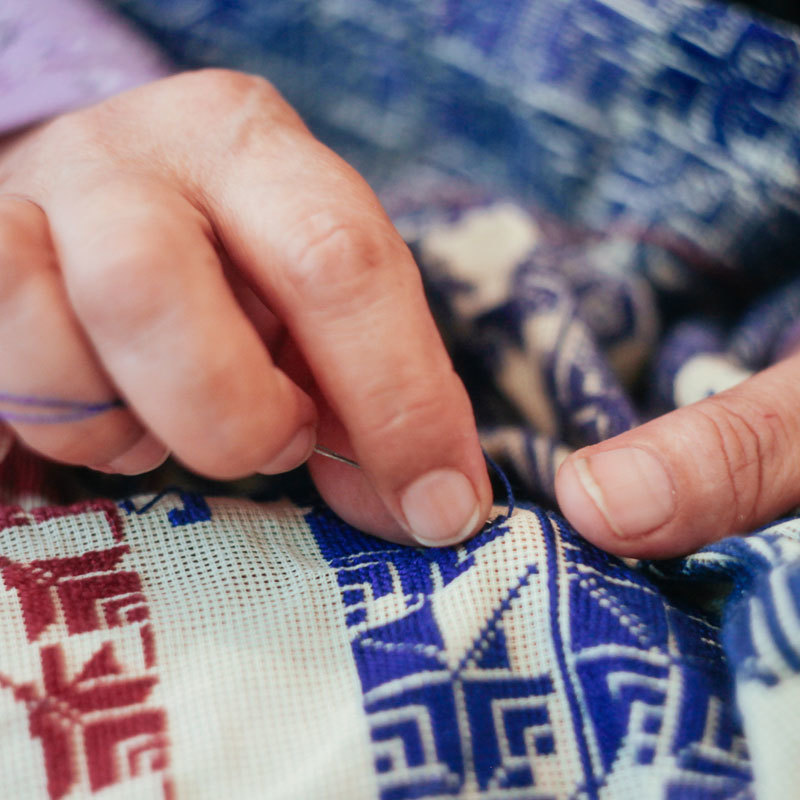 Malak Al-Husseini holds up a square piece of cross-stitch embroidery, with strong colours and patterns stitched with small, uniform, crosses. A small motif embroidered in red reappears across the piece, resembling an elongated pot with flowers. ‘This pattern comes from Jaffa,’ Al-Husseini says. ‘I know that from the flower pots, they are typical of Jaffa. I can immediately see where a piece of embroidery comes from – what specific part of Palestine,’ she says.

Many more pieces are spread out on the table in front of her – large ones with a multitude of colours, smaller ones with minimalist designs. Behind her, inside a wardrobe, is a literal archive of embroidery: sample after sample with different patterns and colour combinations hang tightly together. Some have embroidered palm trees and cypresses, others tiny apples and chickpeas – or figures with names like ‘cow’s eye’, ‘old man’s teeth’ or ‘the baker’s wife’.

‘They are all examples of different Palestinian embroidery,’ says Al-Husseini. 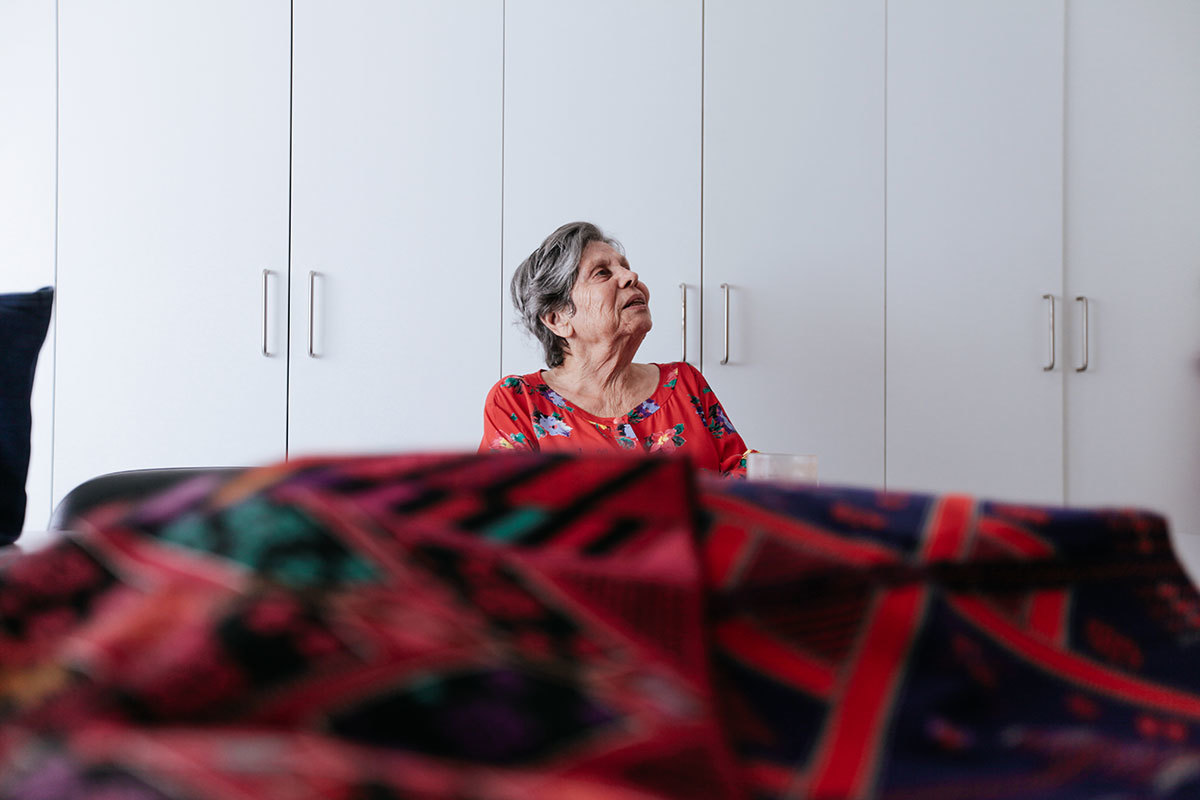 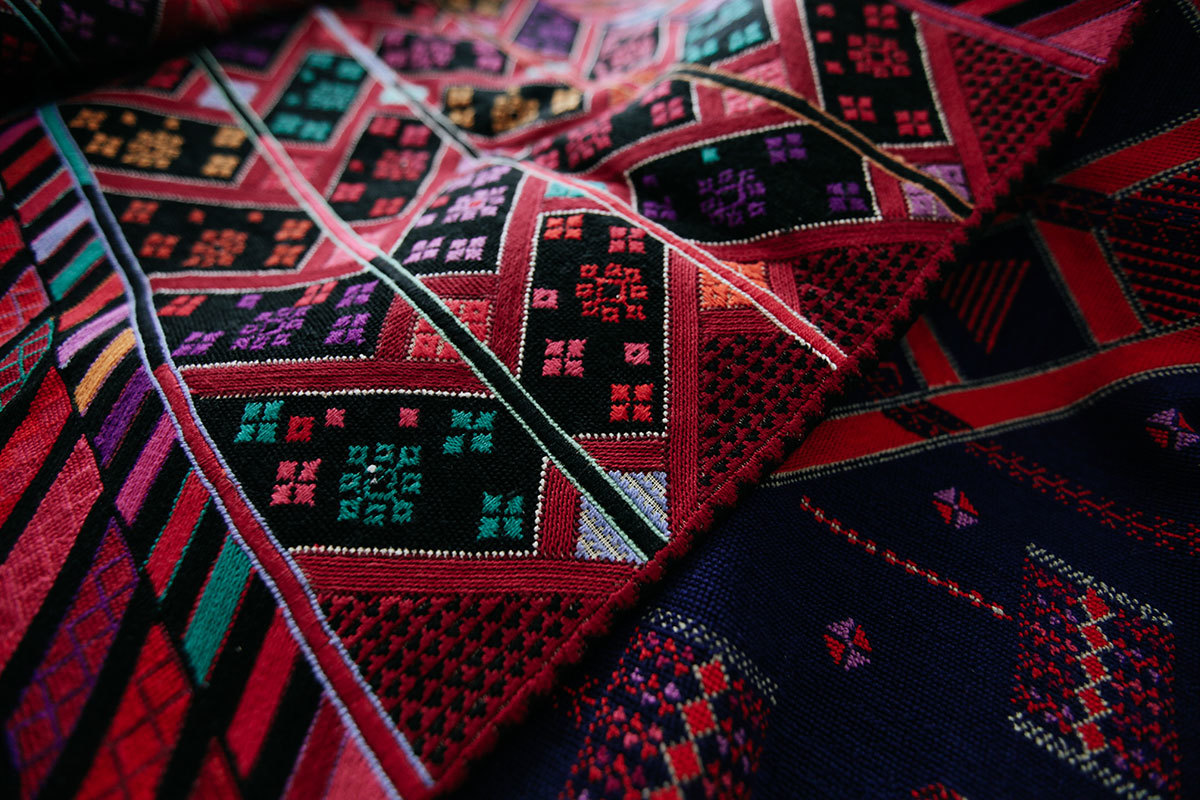 Top: ‘I discovered embroidery as a kid when I saw the village girls coming to Jerusalem in their beautiful dresses. My own mother only did Italian embroidery, like many city folks at that time. I asked her – if we have such an amazing Palestinian tradition, why do something else?’ says Malak Al-Husseini

The collection started with antique dresses she purchased on trips to Jerusalem and brought back to Lebanon, where she came to reside with her family after the Nakba. In 1969, Huguette Caland, the daughter of Lebanon's first president Bechara El-Khoury, founded Inaash, an organisation working to promote Palestinian heritage. Al-Husseini was one of the original members – it’s in their offices, on a quiet side street in the Hamra neighbourhood, where she is sitting now.

‘We wanted to do something for women to sustain themselves in the camps. Today, we have artisans in eight of Lebanon’s 12 camps,’ she says. 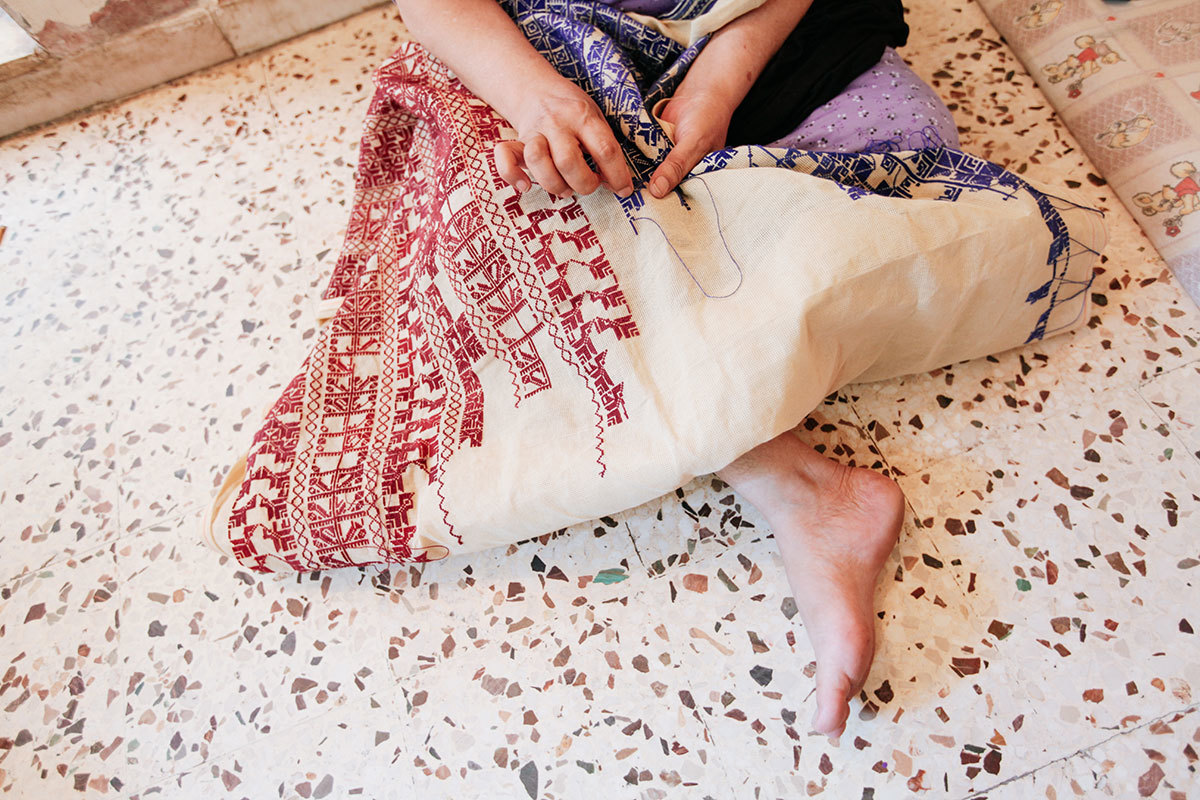 Jamila Salem, one of six artisan sisters, works on a large piece in her home in the Mar Elias refugee camp in Beirut

The art of stitching patterns on clothes and household items dates back long into Palestinian history. It was always an art pursued by women, who would spend years embroidering motifs on their jackets and dresses. Girls started learning at the age of seven, from grandmothers, elder sisters and aunts, and developed their skills throughout their lives. Across Palestine, embroidery took the form of a visual language, speaking about geography, status and belonging.

‘The panels of women’s dresses were the most significant. They would tell where the wearer came from, what village and part of Palestine,’ says Al-Husseini.

Bethlehem and its surrounding villages, for instance, were known for lavish embroidery with inlaid cords in gold or silver. Gaza was famous for its indigo blue, Ramallah for its heavily decorated shawls and headscarves. Women from the nomadic villages around Bir Sabea in the southern desert used fabrics in black to make large, flowing, dresses, decorated with deep red. 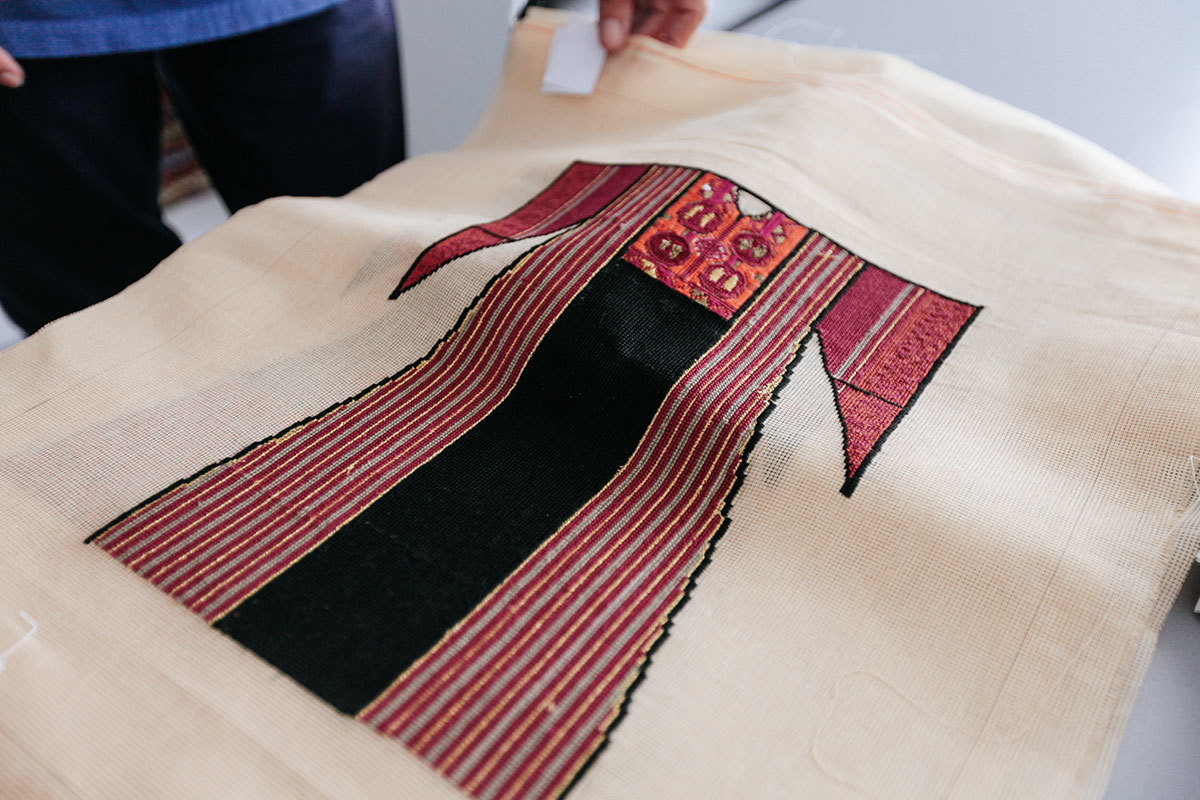 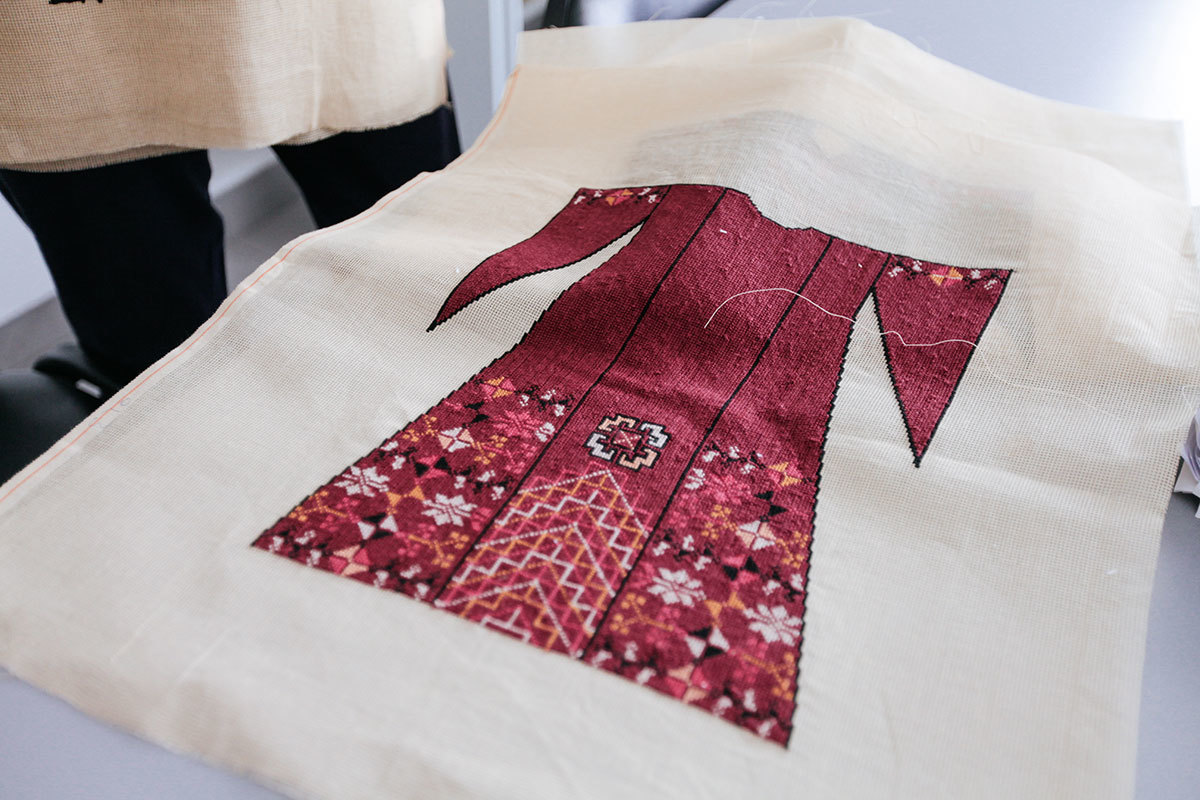 ‘Until the 1920s, each region had their own patterns. That only changed when the car came, and people and patterns began to move around,’ says Al-Husseini.

She walks into the main room of Inaash, where a group of women are gathered around a big table. Dresses on display and shelves with embroidered items for sale line the walls, and several pieces in the making are laid out on the table. Each week, craftspeople from the camps come to meet with Al-Husseini, who curates the patterns they work on. 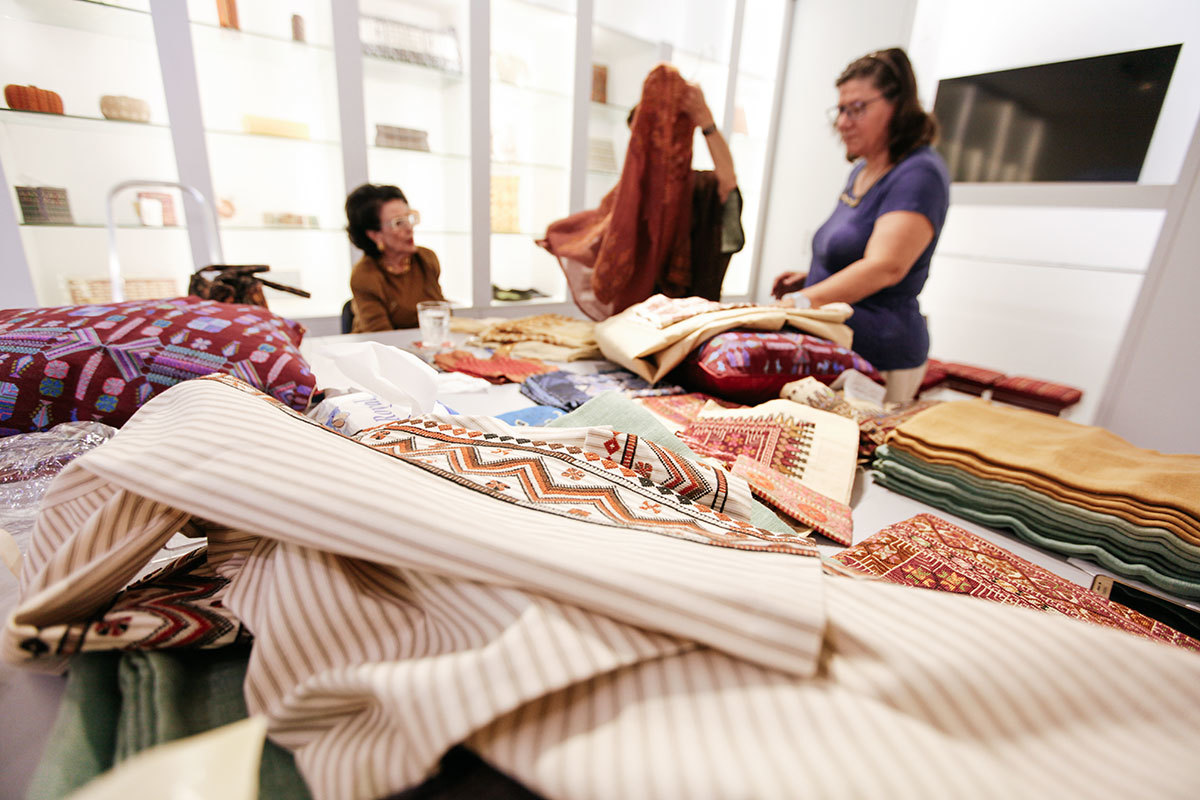 Women in the showroom at Inaash’s offices in the Hamra neighbourhood in Beirut. Since 1969, Inaash has trained some 10,000 women and produced almost three million embroidered pieces

‘We play a bit with the traditional motifs, combining them and sometimes changing the colours. I don’t embroider any longer, I’ve passed 90. But I still do the designs,’ she says.

One of Inaash’s most skilled embroiderers lives in a small house on a narrow street in Mar Elias, one of Beirut’s refugee camps. The entrance leads right into the living room, where Jamila Salem is seated on the floor along with five of her sisters.

‘We’re only girls in the family, eight sisters. And six of us do embroidery,’ she says. 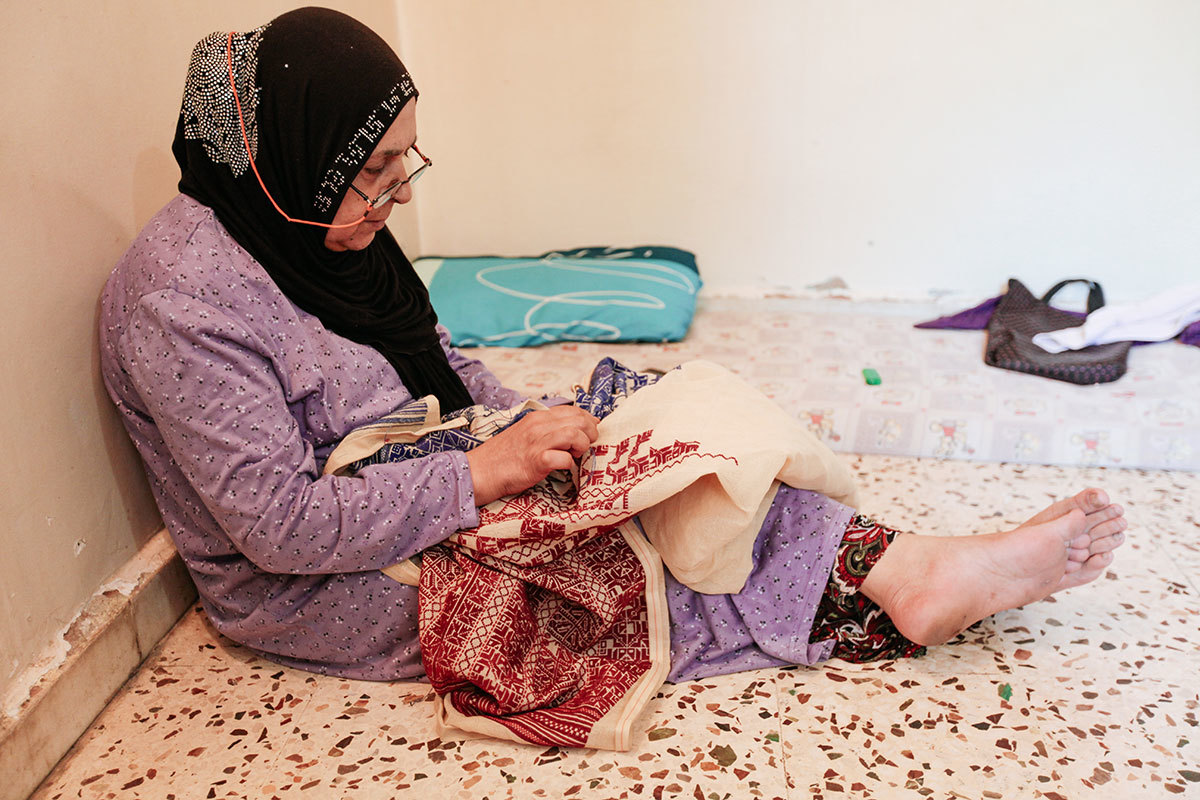 She stretches her legs on the floor and leans back against the wall. With one hand, she puts on a pair of glasses, lets them rest on the tip of her nose. The other hand picks up a needle and a large piece of embroidery, halfway finished, with patterns in red and blue.

She works with ease, moving the needle from left to right to make single, diagonal stitches. When reaching the end of the entire row or figure, she works backwards to let another set of stitches cross over the first.

‘Originally, we come from Haifa, but we were born here in Beirut. This pattern is from Bir Sabea so it’s not our region. But for us, it’s all Palestinian,’ she says.

The blue and red motifs, when repeated across the canvas, form a pixelated symmetry, typical of cross-stitch work.

‘It’s all about counting. There’s no need for a pattern because once we’ve made all the figures, we can look at them and use them as a template,’ says Salem. 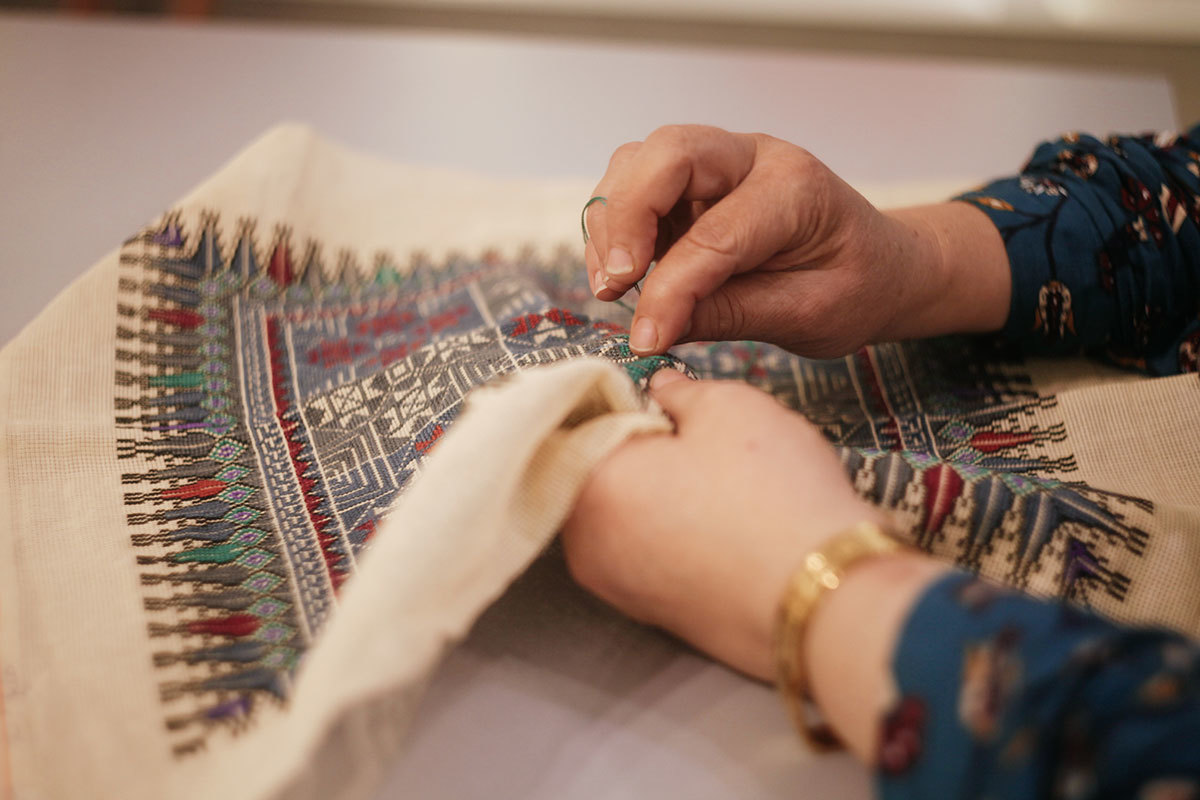 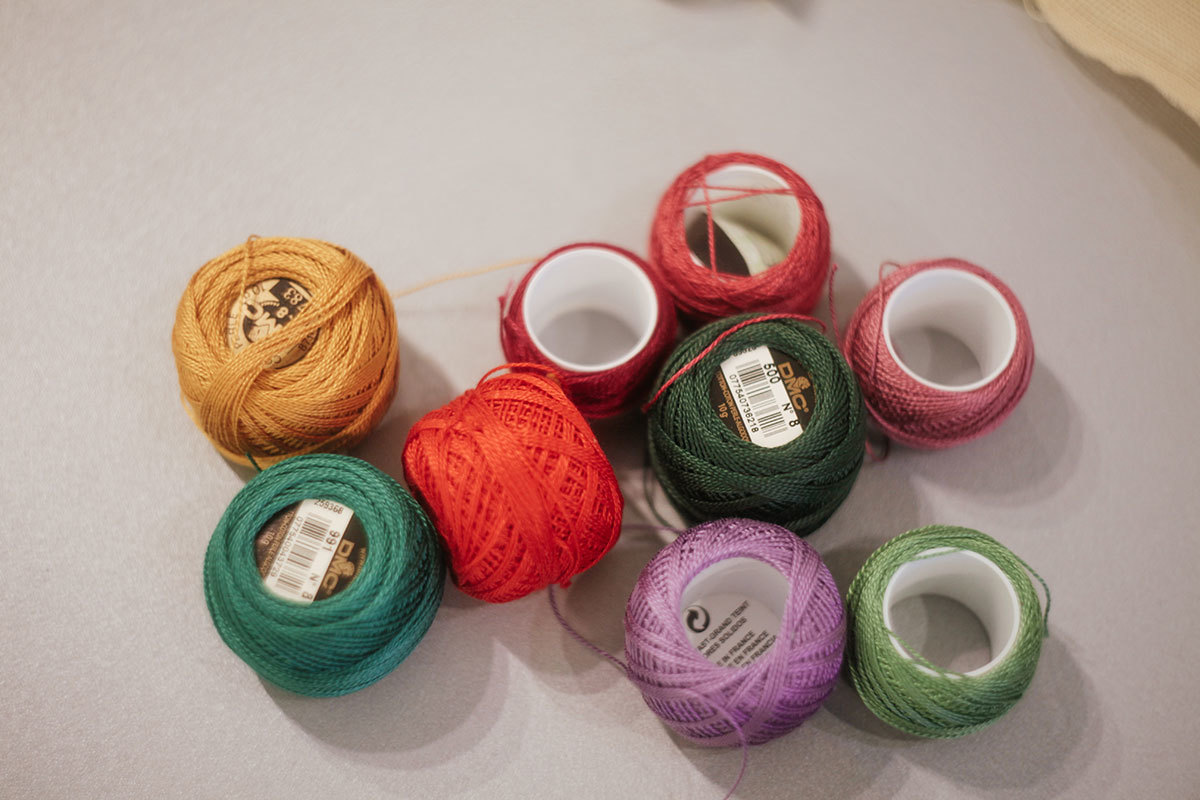 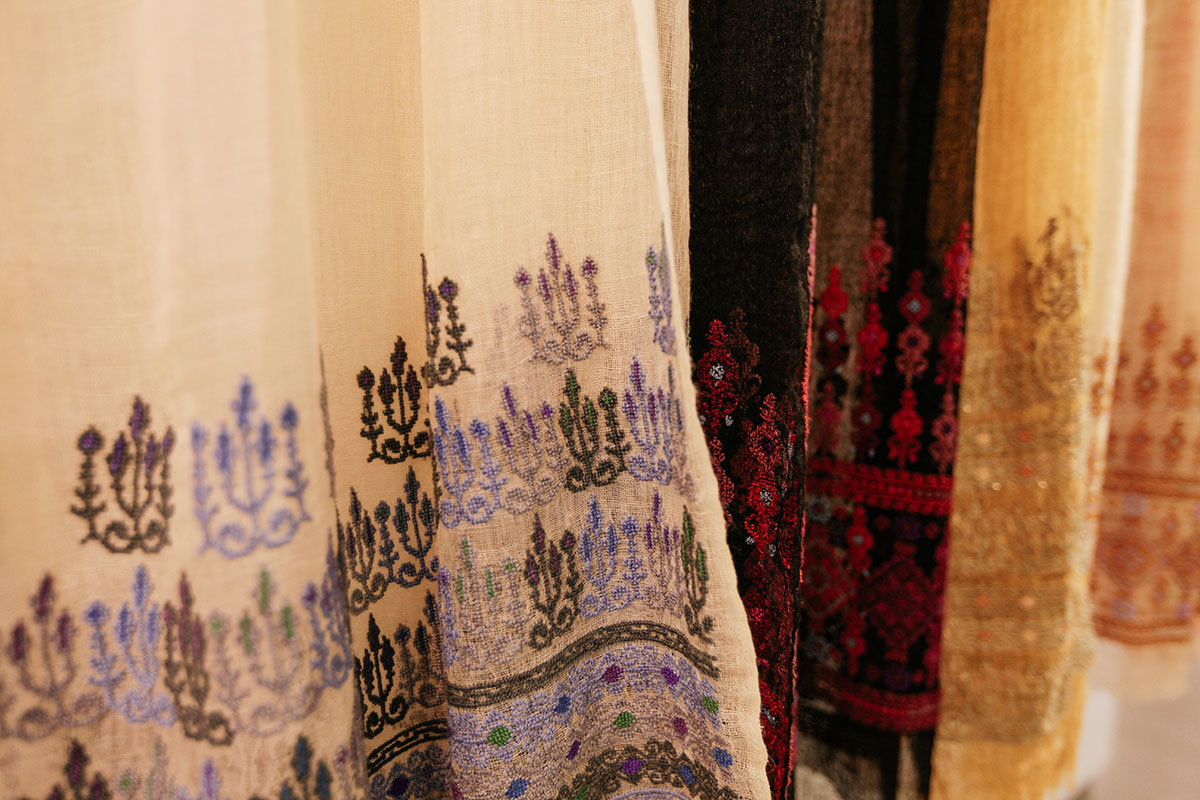 Top: Cross-stitch, an X-shaped stitch used to form repetitive, symmetrical patterns, is the most emblematic of the Palestinian embroidery techniques

Middle: Traditionally, embroidery artisans used hand-dyed fabrics and thread, but that tradition was lost with the displacement of the Palestinian people

Most days, Salem and her sisters sit here together. They spend three to four hours, each one working on their own piece. When the electricity cuts – which happens daily in Lebanon, and for long hours in the Palestinian camps – they work using candlelight, or the light on their mobile phones.

‘You have to find ways,’ says Salem as she continues her work.

Palestinian embroidery has evolved and changed through the years. The craft reached its height during the Ottoman era, when handmade dresses were worn by all village women. Materials were dyed by hand, using local plants. Red came from insects and pomegranate, yellow from soil and vine leaves. Blue dyes were made from the indigo plant, and purple from crushed murex shells. Producing these dyes were well-kept secrets, and several families specialised in their trade. Fabrics in cotton and silk were imported from Syria, where traders in cities like Aleppo, Damascus and Homs produced styles and materials exclusively for the Palestinian market. 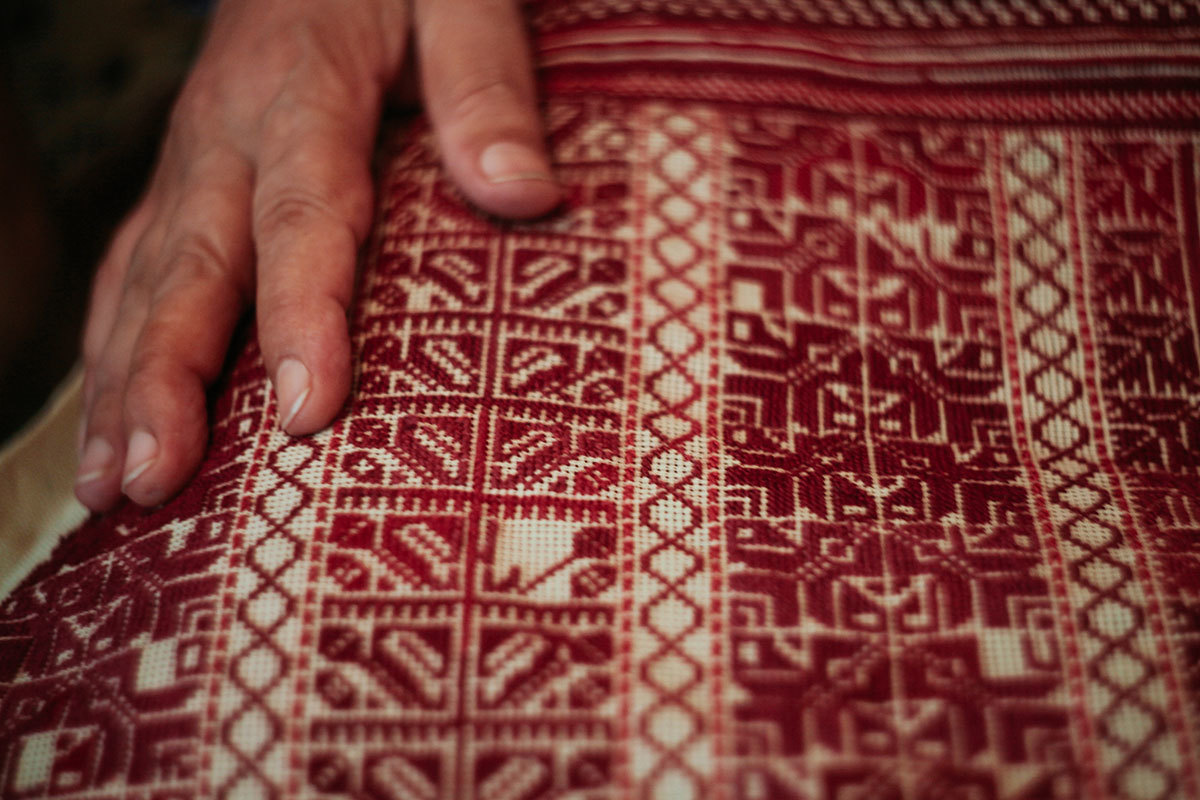 Patterns and motifs historically varied from village to village and region to region in Palestine. Today, craftspeople often mix designs and colour schemes

In 1948, all of this changed. The displacement of the Palestinian people disrupted rural traditions, including the cross-stitch craft. In the newly established camps, artisans could no longer access finer materials and handmade dyes, and previous geographical boundaries were no longer the same. Women began stitching the same patterns, and slowly, a distinct ‘Palestinian style’ started to take shape.

‘For us, embroidery became our identity, a form of cultural resistance,’ says Al-Husseini.

In the 1960s and 1970s, Palestinian flags and maps began to appear on dresses and accessories, and embroidered replicas of the Dome of the Rock. The craft was promoted as a means of living for women in the camps, something that Inaash and other organisations still maintain today.

Several contemporary designers have now started to incorporate embroidery into their pieces. A collection of transparent plastic stools in Inaash’s office has carefully embroidered cushions – they are made for Lebanese designer Nada Debs. In 2012, Palestinian artist Mona Hatoum created the installation ‘Twelve Windows’ together with Inaash artisans, where a dozen cross-stitched panels hung as laundry were shown at galleries like Tate Modern and Centre Pompidou. 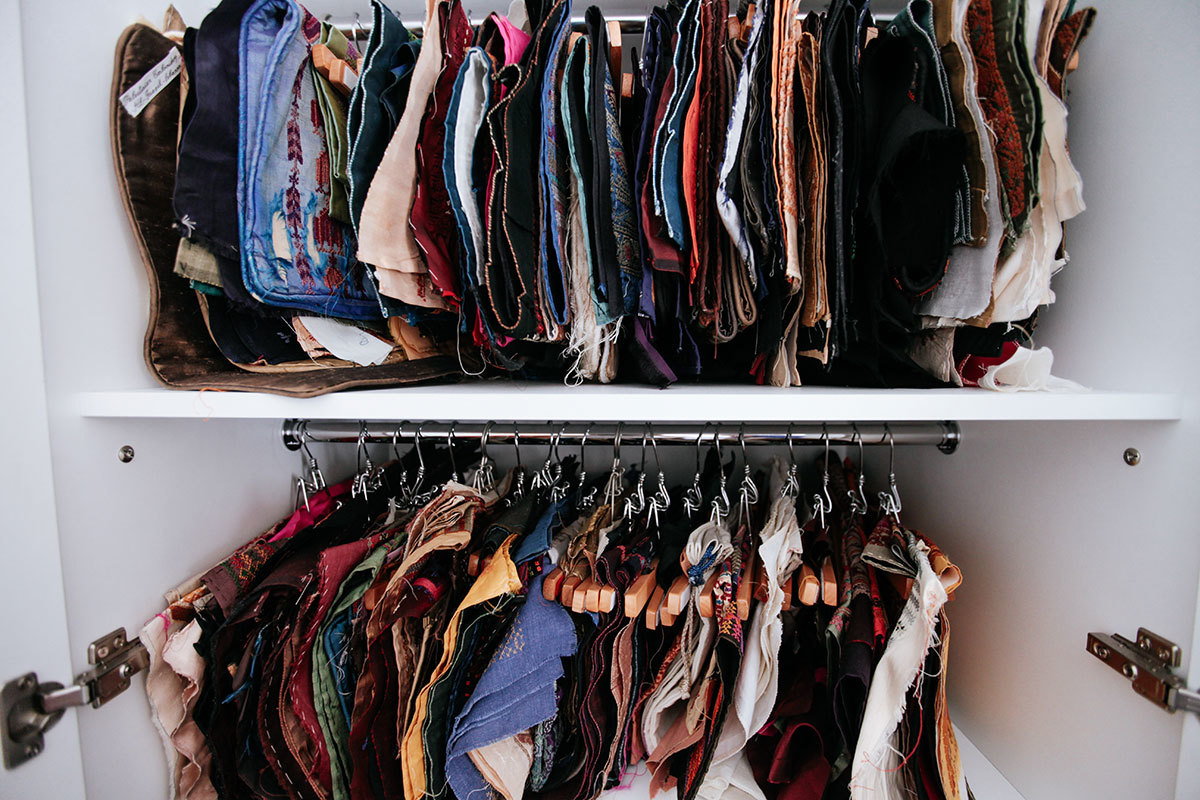 A few of the many embroidery samples archived by Inaash

‘Young girls often think of it as teta’s work. But for us, it’s more than that. It’s fashion and our culture,’ she says. 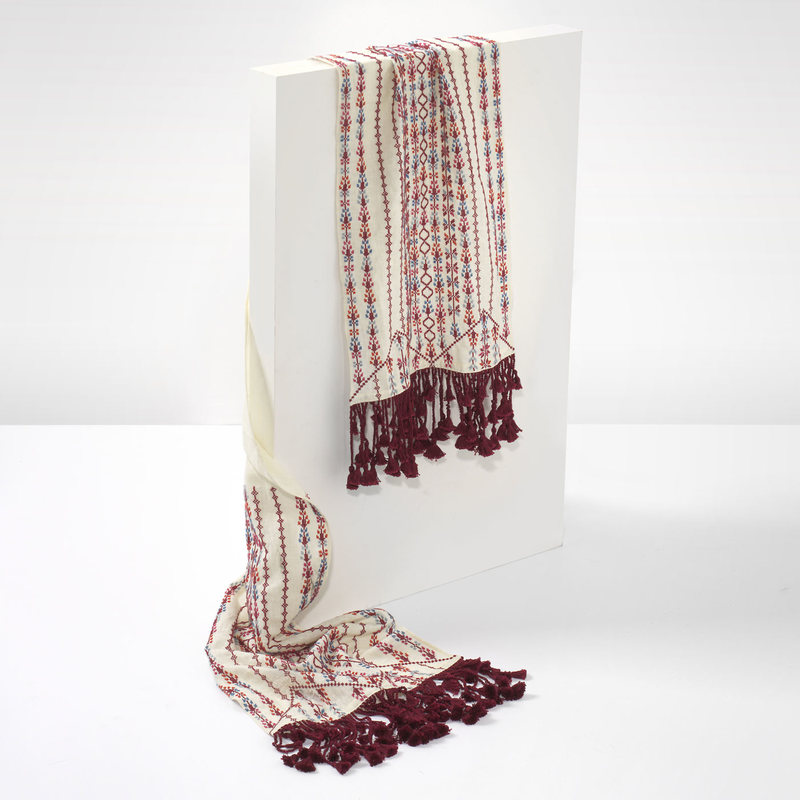 Hand embroidered by the artisans working within The Jordan River Foundation, this piece features exquisite embroidery throughout.