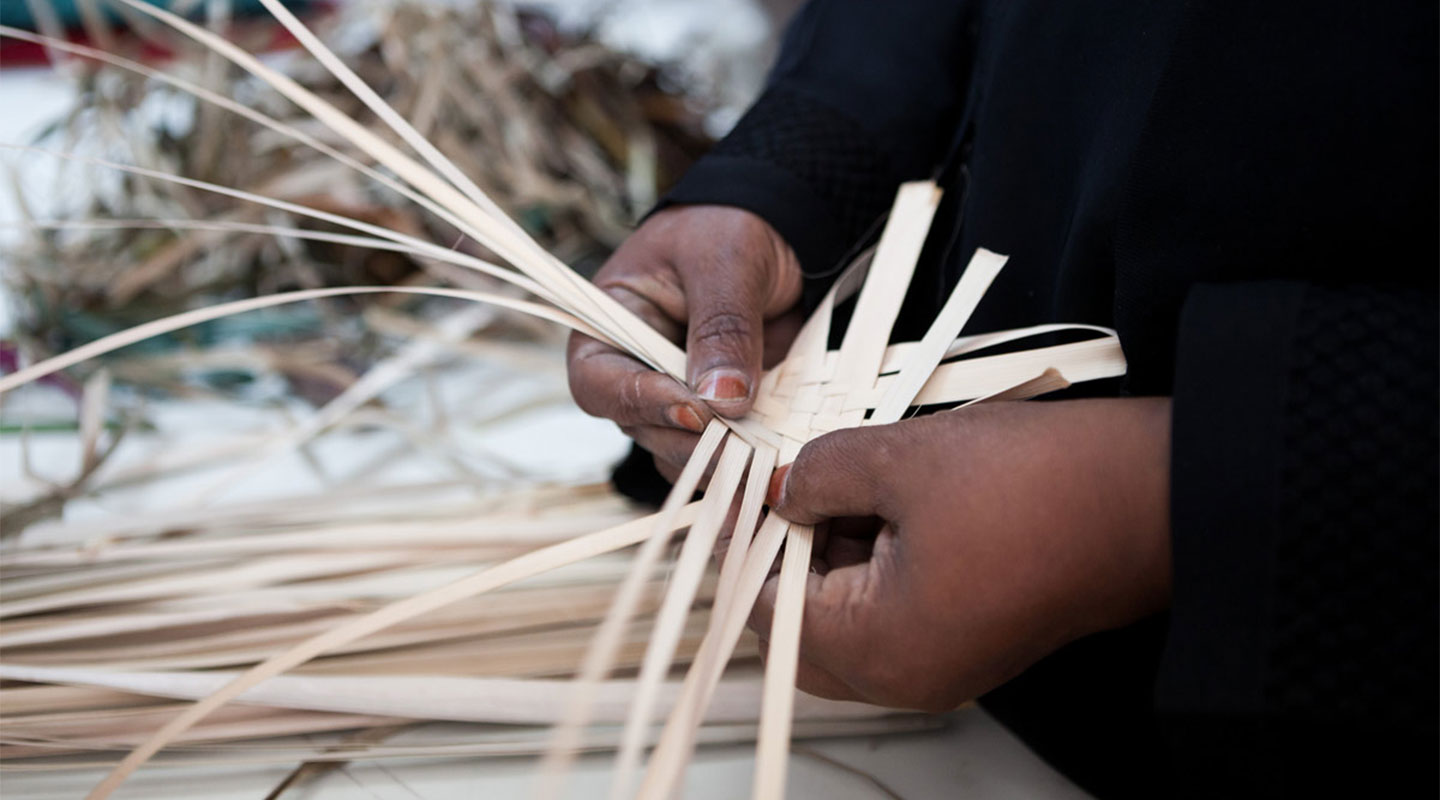 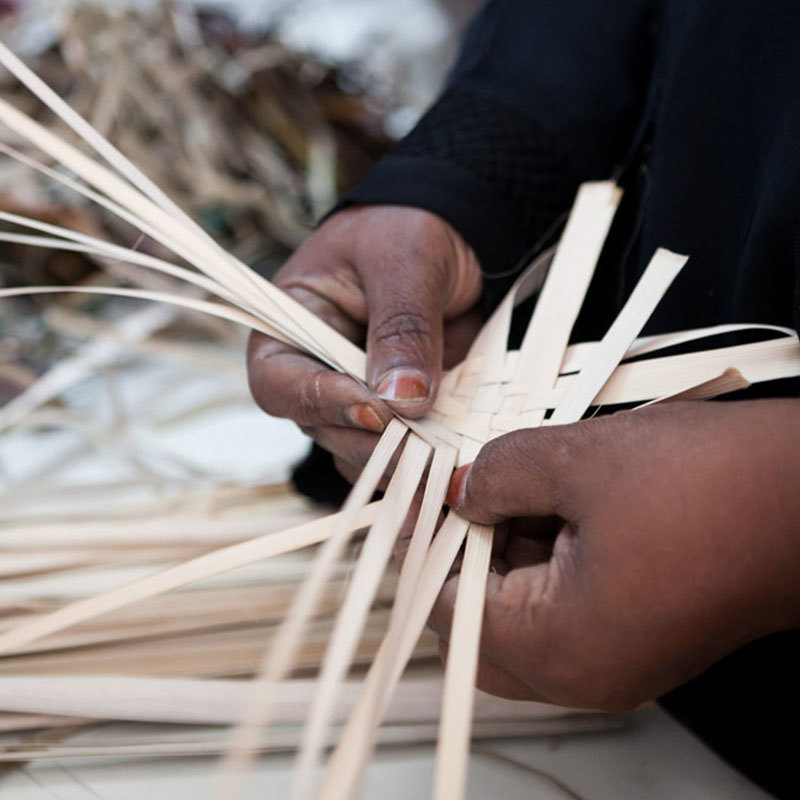 ‘We are a real palm country,’ says Afnan Bashaikh. She smiles as she opens the door to a large space on a rooftop in Jeddah, belonging to the crafts organisation Sleysla. In the middle of the room is a large table; in one corner is an old bathtub and in another, several huge aluminium pots filled with boiling water.

Bashaikh walks up to the table, where bunches of long, dried leaves are spread out. Some are naturally beige; others are blue, green or red. They all come from the palm tree, which grows in abundance across Saudi Arabia and symbolises heritage and tradition.

‘We do palm leaf weaving up here. It’s a craft that has been done all over the country, everywhere the palm grows,’ she says.

Opposite her on the other side of the table stands Saada Al Harbi, one of Sleysla’s artisans. She comes from a village outside Mecca, where not long ago most people worked with khos, traditional palm leaf weaving. 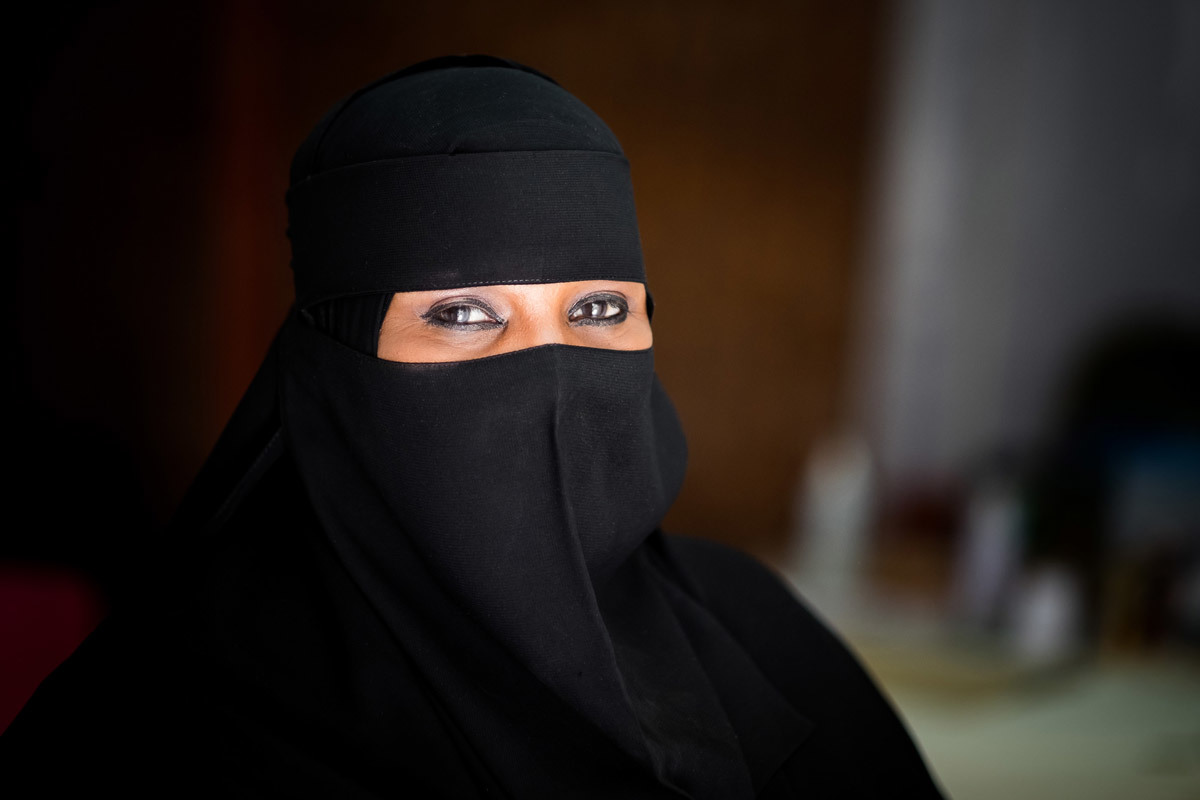 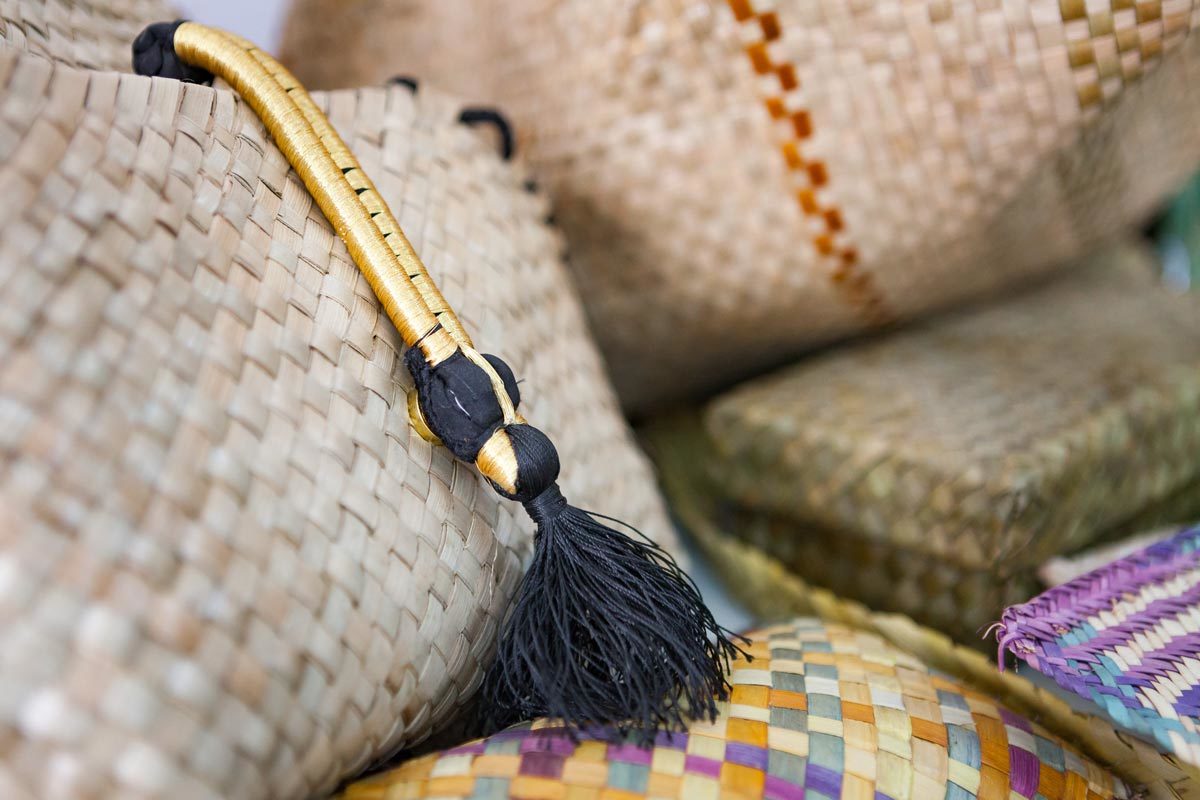 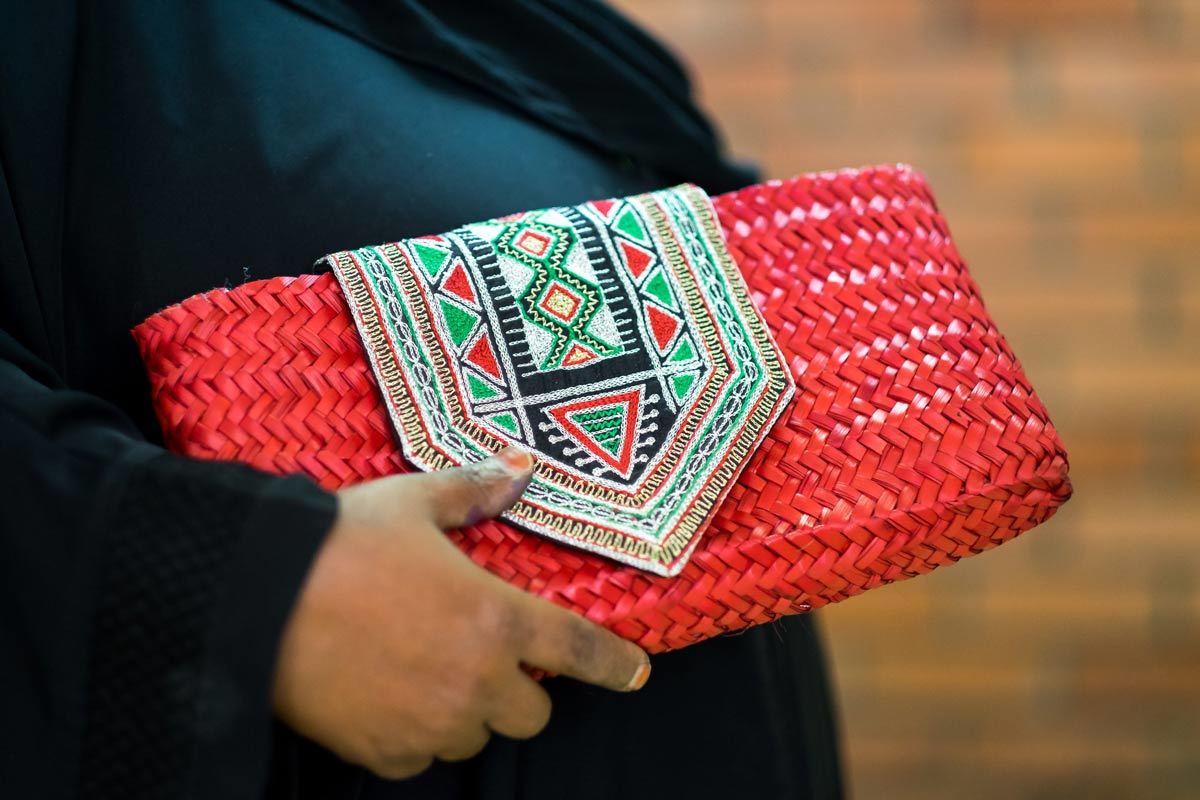 Top: Saada Al Harbi remembers a time when almost everyone in her village did work associated with the palm tree
Middle: Sleysla works with traditional arts and contemporary designs, to revive Saudi Arabia’s crafts heritage
Bottom: One of Sleysla’s best selling products is a contemporary clutch bag, made with traditional craft methods

‘In the past, my village lived from growing dates and onions, and from making things from the palm tree. My father made ropes from palm fibres, and my mother made khos,’ she says.

When she was around 10, Al Harbi’s mother and grandmother taught her the craft. ‘We would sit together and work in the village almost every day,’ she says.

With one hand, Al Harbi starts picking up frond after frond from the table. With the other, using her fingernail, she splits each of them in two. ‘This is the traditional way of splitting them. We use scissors sometimes, but I prefer this way.’ 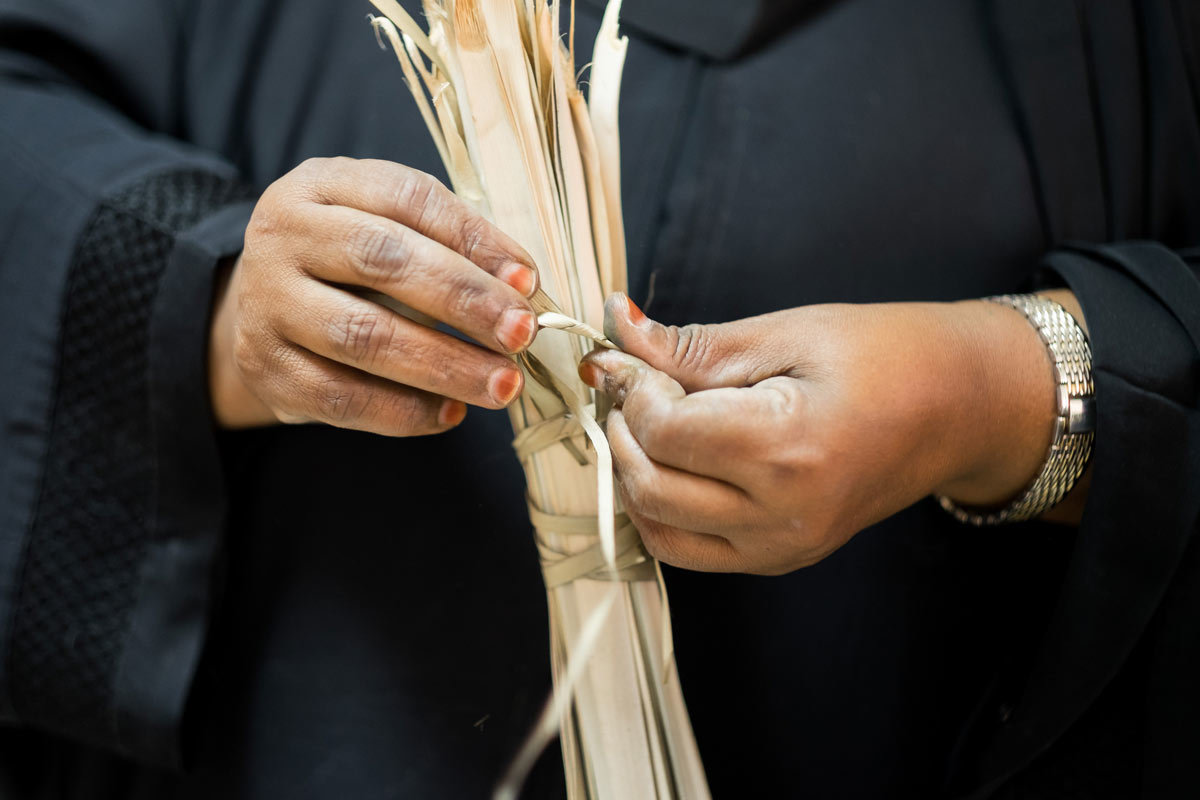 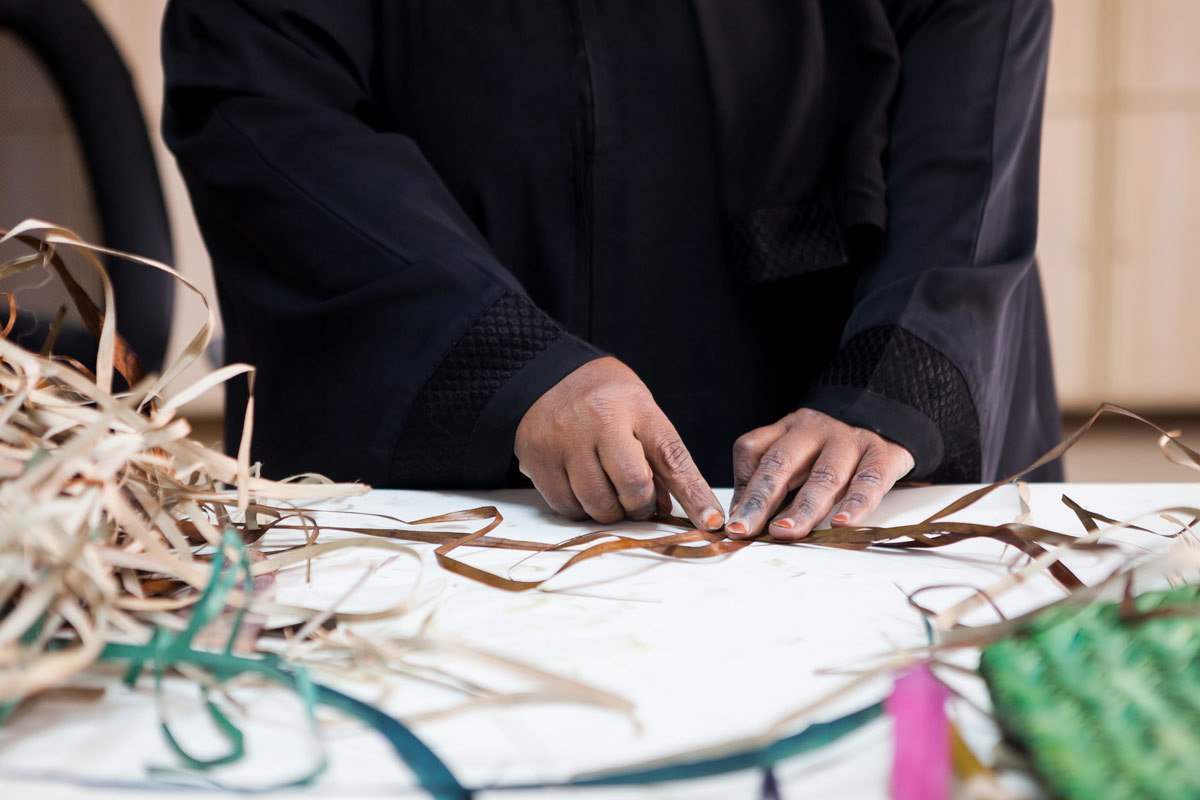 Palm fronds are a reliable material, because the tree is an evergreen and its leaves can be harvested all year around. Saudi families once relied heavily on the palm. They used stems for roofs and supporting structures for houses, and leaves for walls and inner roofing.

It’s hard to know exactly how old the craft is, as organic material decays quickly. But archaeologists have found evidence of foundations of houses made entirely from palm at sites dating back to the medieval period. And the Prophet’s Mosque, built in Medina in the year 630, was made entirely from trunks and leaves of palm.

The craft of making baskets and other utensils also dates far back in history. It is one of the oldest human crafts, and is practiced all over the world. People across the Caribbean, Polynesia and India as well as countries like Kenya, Sudan, Cameroon, Cambodia and Costa Rica all have rich basketry traditions. The oldest known baskets were found in Fayoum in Egypt, and are carbon dated to between 10,000 and 12,000 years old.

For the people of the Arabian Peninsula, their nomadic lifestyle made the palm tree an essential lifeline. They would, and still do, weave baskets and bowls for the kitchen, mats for sleeping and placing food trays, and bags to be carried by camels.

‘The craft was always part of the daily chores of women. But these days few youth know how to do it, so we are trying to revive it,’ says Bashaikh. 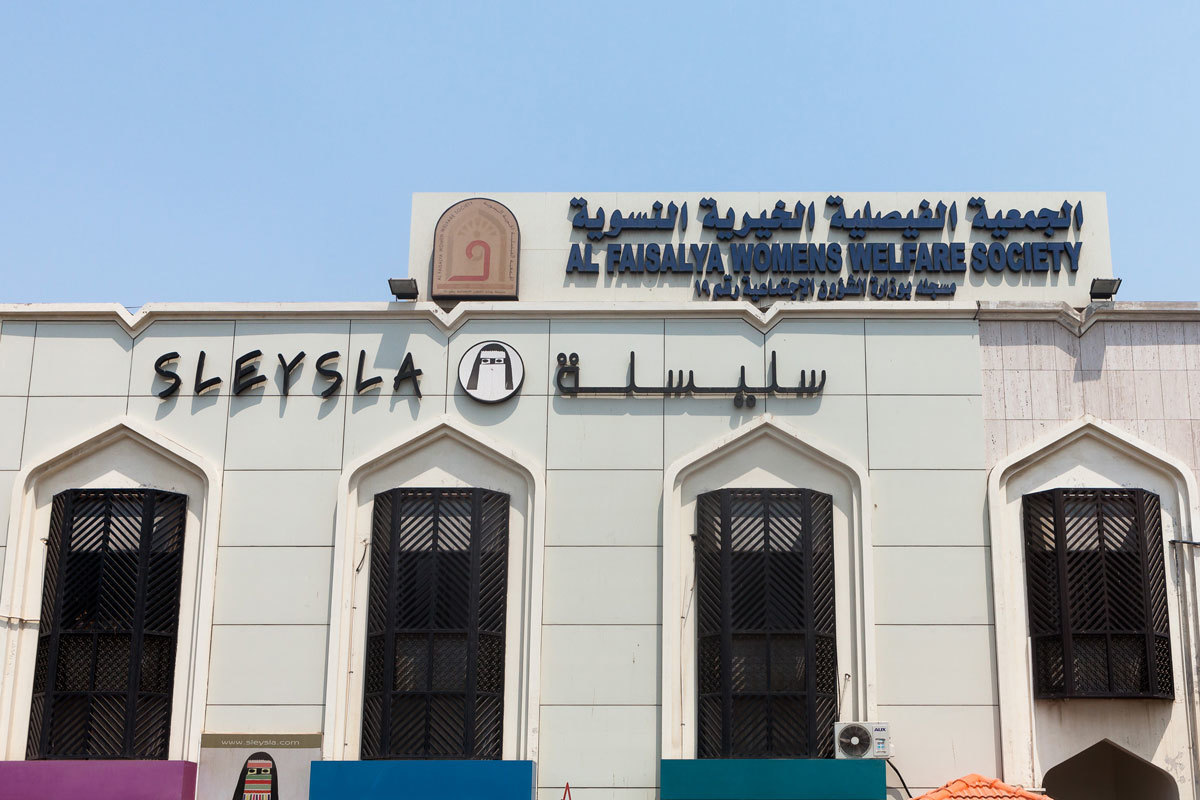 The Sleysla building, in a central part of Jeddah

She is fairly new at Sleysla, which was established in 2003 to improve the economic situation of girls and women with limited access to education. The organisation mainly works with people who have different kinds of disabilities, and a large number of the 50 or so artisans are visually or hearing-impaired. The building houses several workshops: for jewellery and embroidery, and for making small dolls filled with oud perfume. There is also an extensive archive with samples of fabrics and embroidery from across Saudi Arabia.

Al Harbi, having split all the fronds into thin strips, takes them to the corner with the boiling water. She opens a package with coloured powder and throws a handful into a pot. 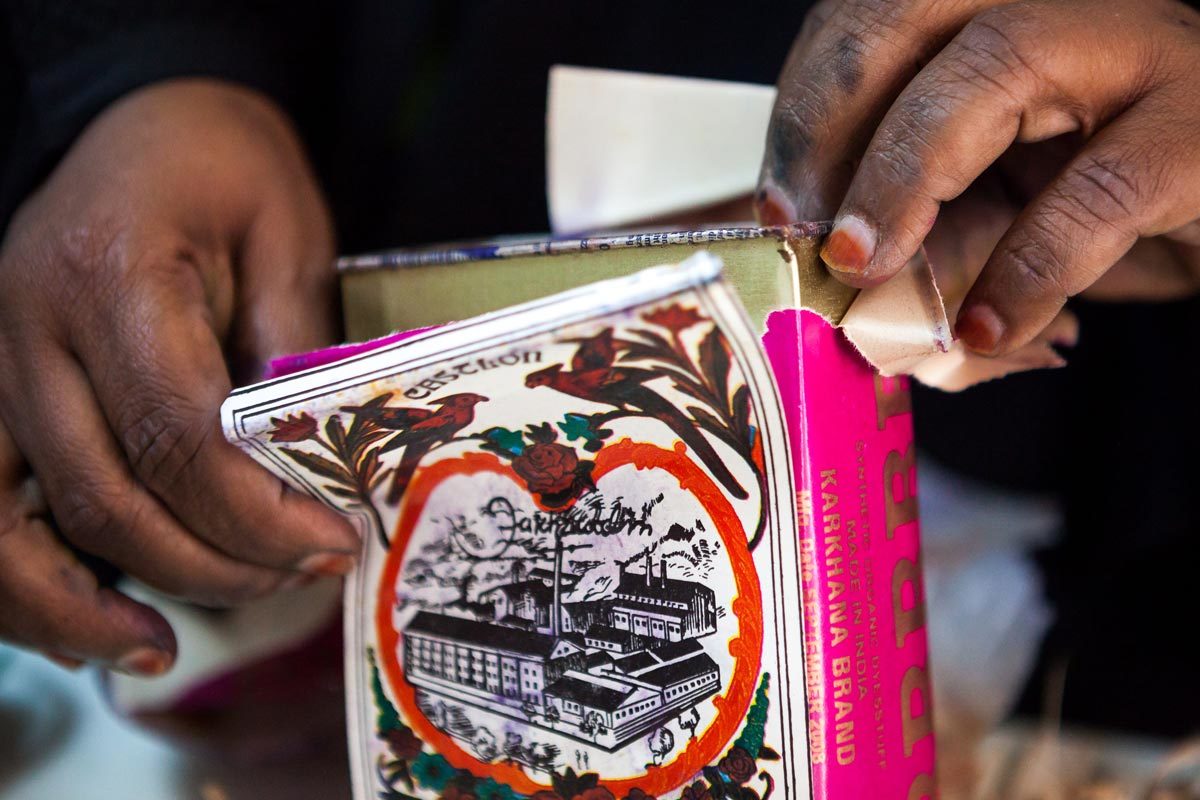 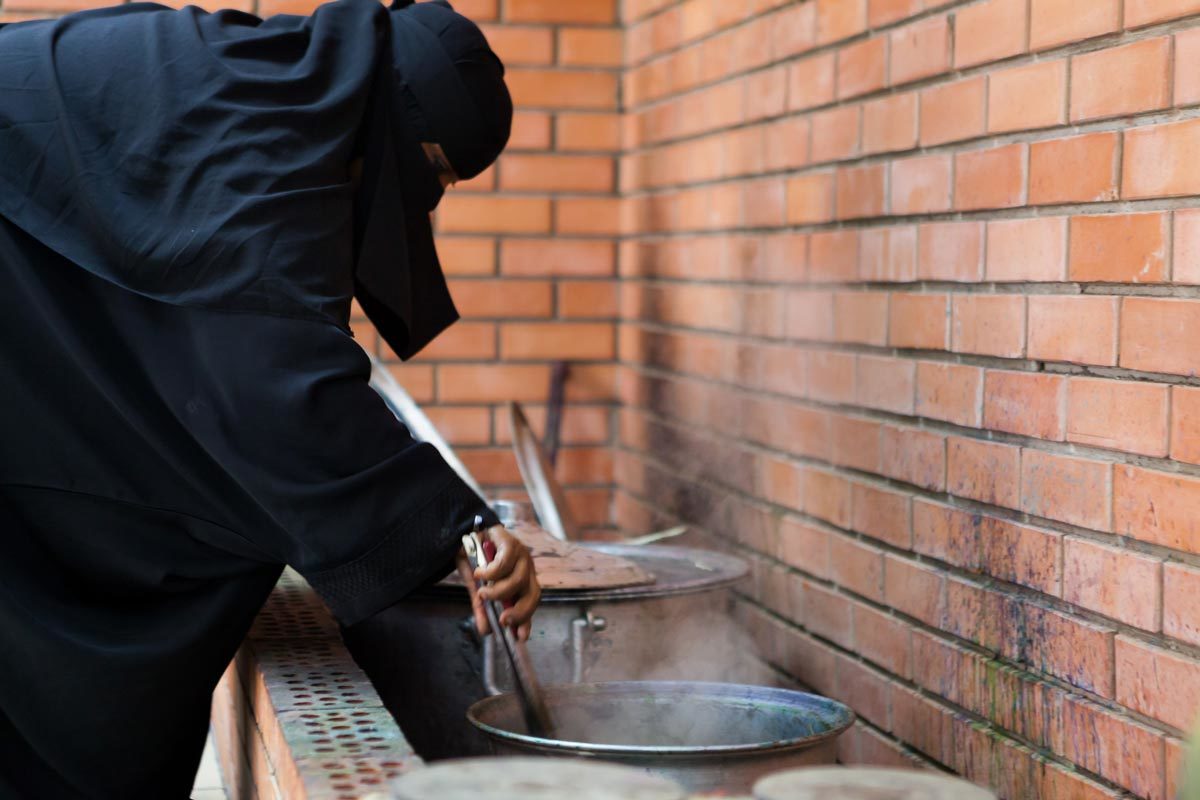 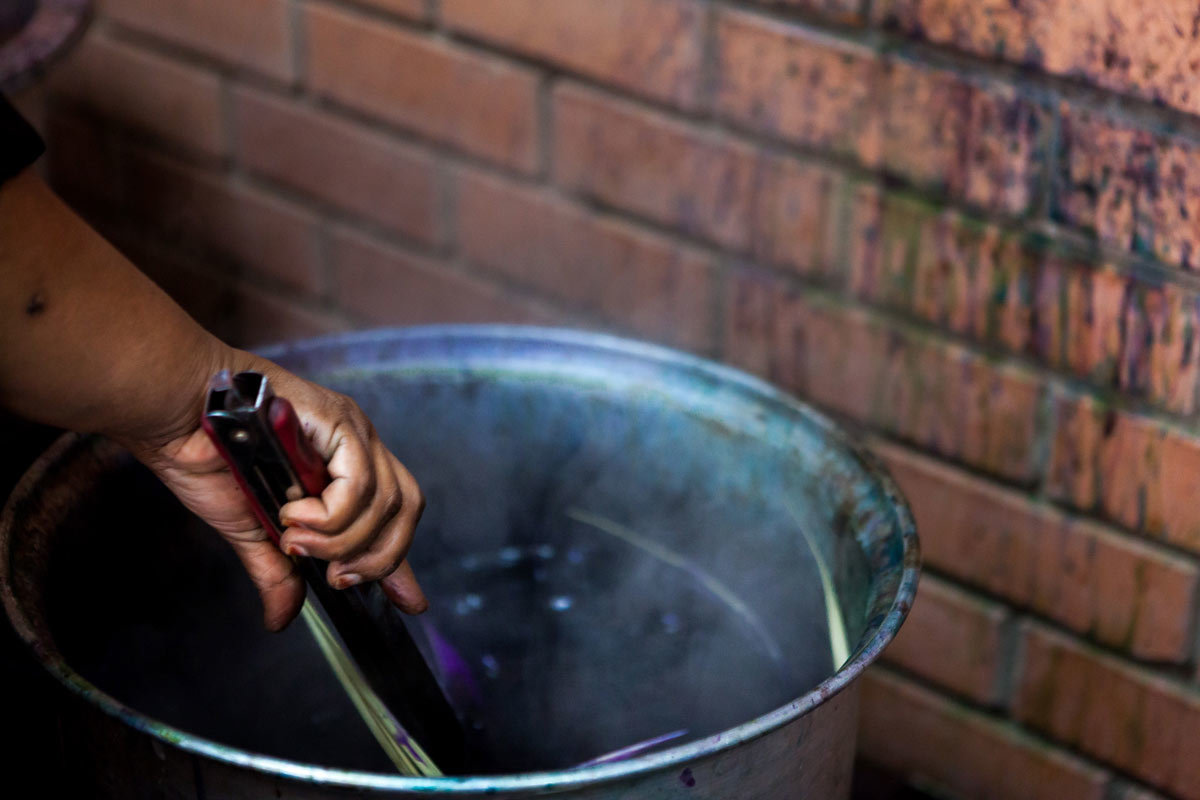 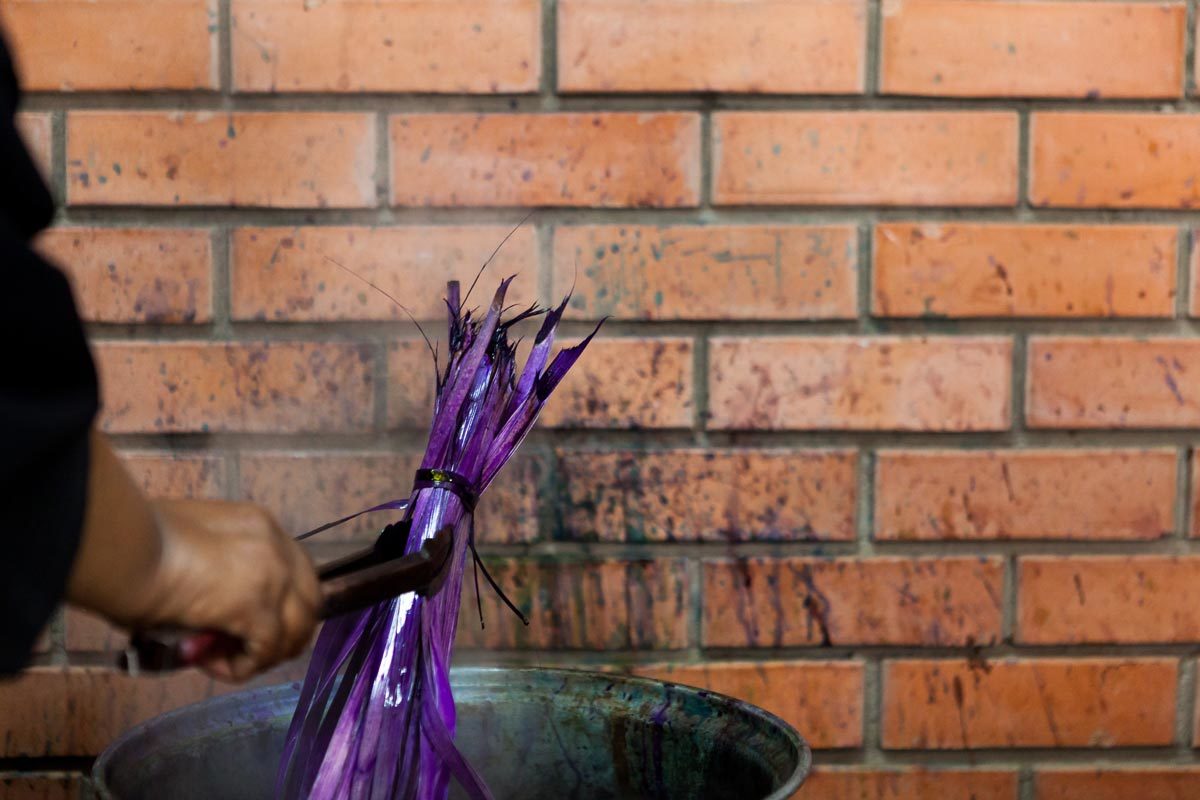 Sometimes, the fronds are dyed before the weaving process. Al Harbi opens a box with colouring powder, to be used to dye the palm fronds. They only need a minute or two in the coloured water mix.

‘The next step after drying and splitting the leaves is moistening them again in water, to make them soft and easy to work with. Sometimes we colour them as well,’ she says.

She puts a bunch of thin strips in the now-purple water – only to quickly take them up again. ‘They only need a minute or two to get coloured. That’s different from when we used natural dyes from the plants and earth around us. That needed much more time,’ she says.

It is after these initial steps that the plaiting work begins. Al Harbi takes out a piece she is already working on: light in colour and woven into a large rectangular shape. ‘This will be a bag. When we make bags we always start with panels like this, then sew them together,’ she says. 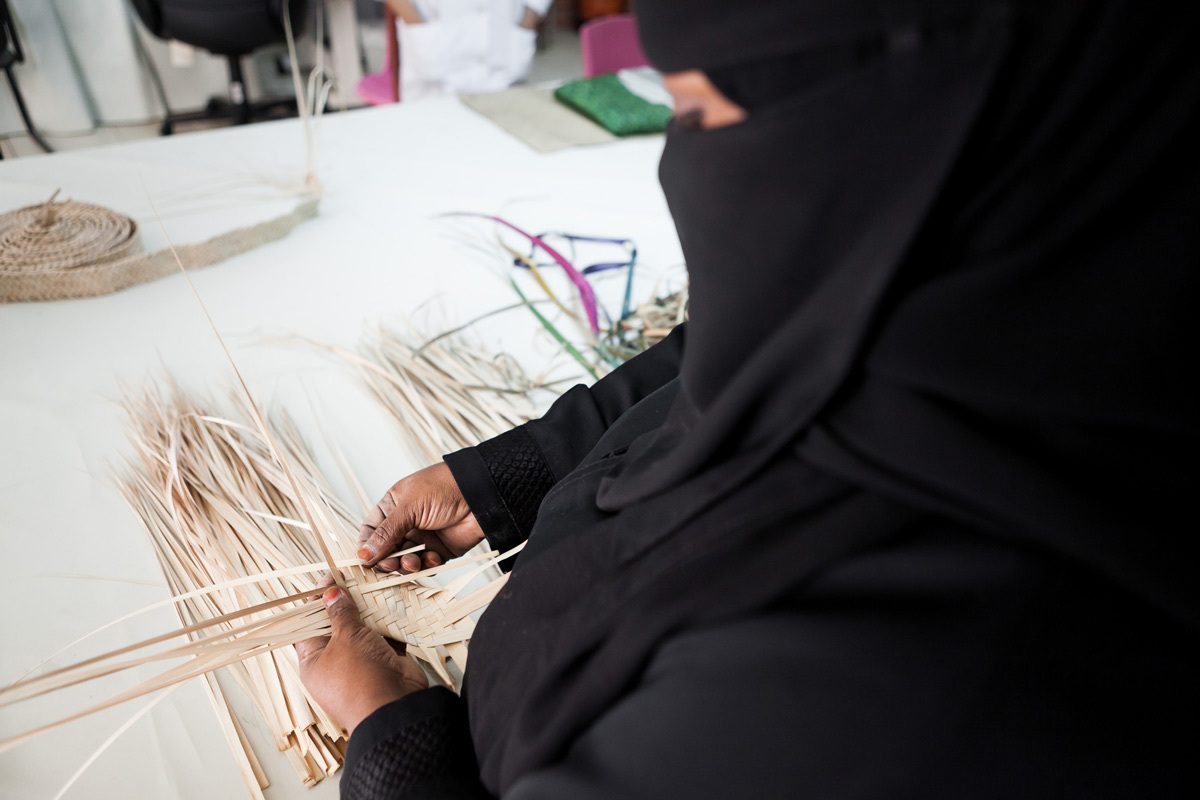 The traditional Saudi way of making baskets and bags is similar to basketry found all across the world.

‘When plaiting, you start with two strips and just cross them over each other like this.’ With ease, she overlaps the thin palm strips, working with two at a time. Woven together, they form a repetitive, geometrical pattern.

‘These bags are our best sellers. We have done them for a long time, always using the same design. The only thing we change is the colour and the decoration,’ says Bashaikh, and points to a small piece of embroidery decorating a finished bag.

Sleysla’s artisans sometimes do another kind of palm weaving as well, a style called ‘Malaysian’, made with soft and long leaves to form fine and even squares. A team of Malaysian craftspeople who came to Saudi Arabia taught the technique.

‘I learned the Malaysian style as well, but I still prefer our traditional way. It is more durable and can be used for things that mustn’t break easily,’ says Al Harbi.

Her hands continue to plait the leaves – fast and without effort, just as they have done countless times before. The room around her is quiet, except for the soft crackling of the dry leaves.

‘I don’t find it hard, it’s nice work. If you love something, subhanallah, it is not hard,’ she says. 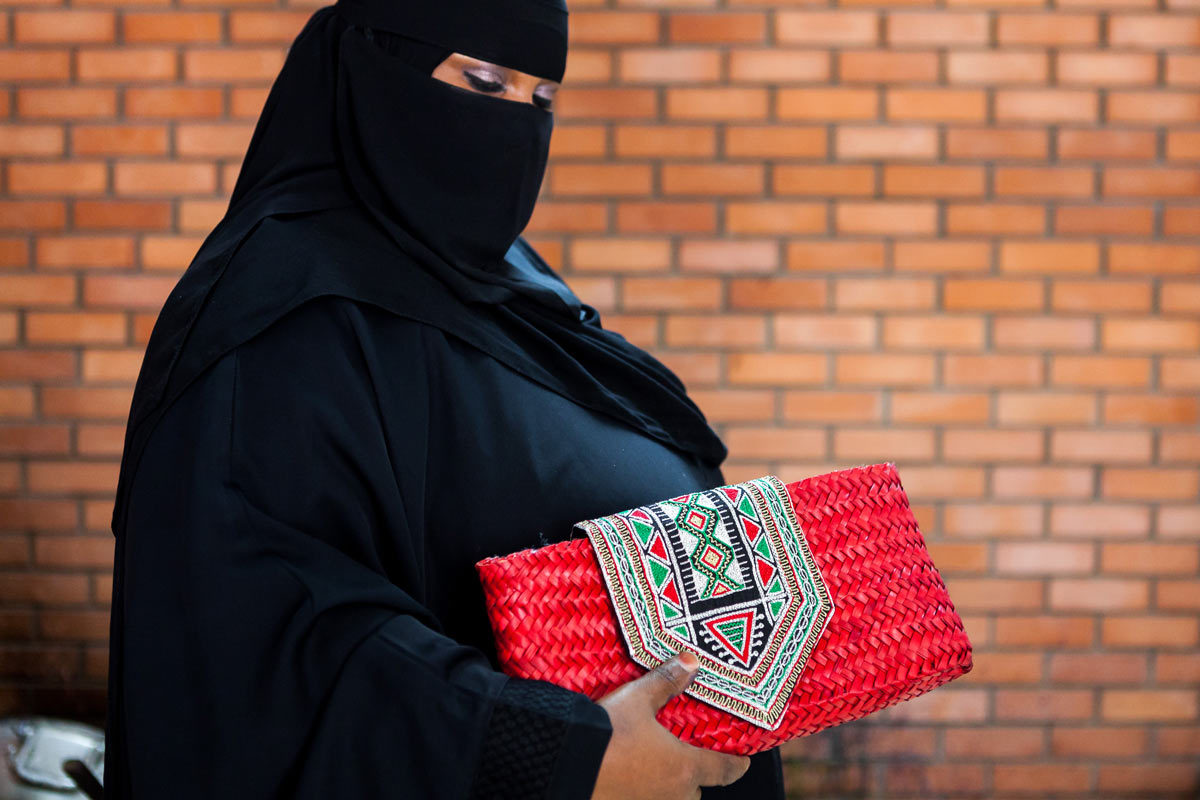 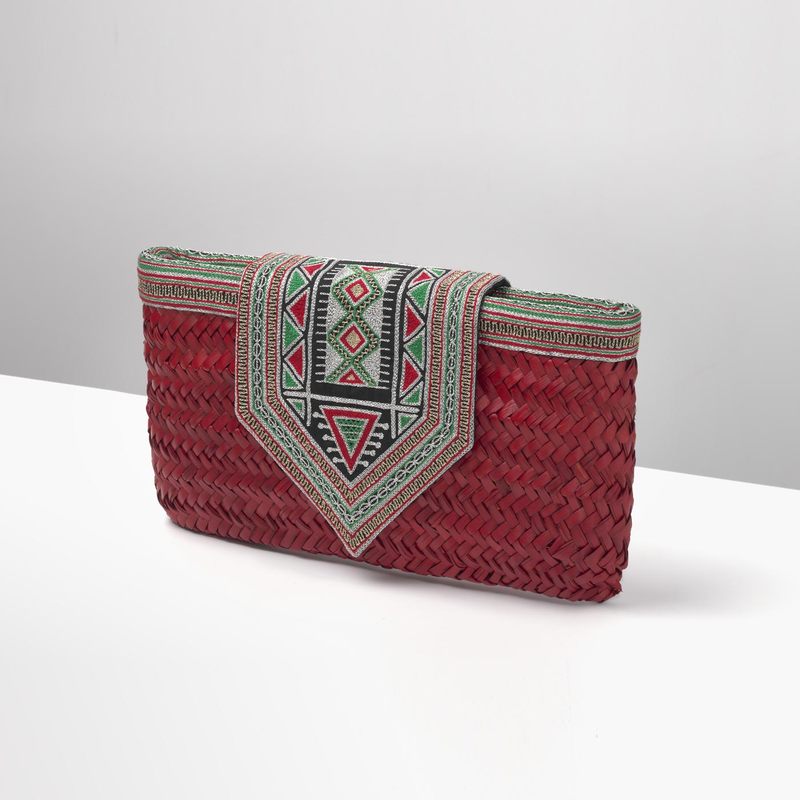 The Sleysla Clutches are available to purchase from the Atharna store.

Shop the Sleysla Clutches
Our Saudi