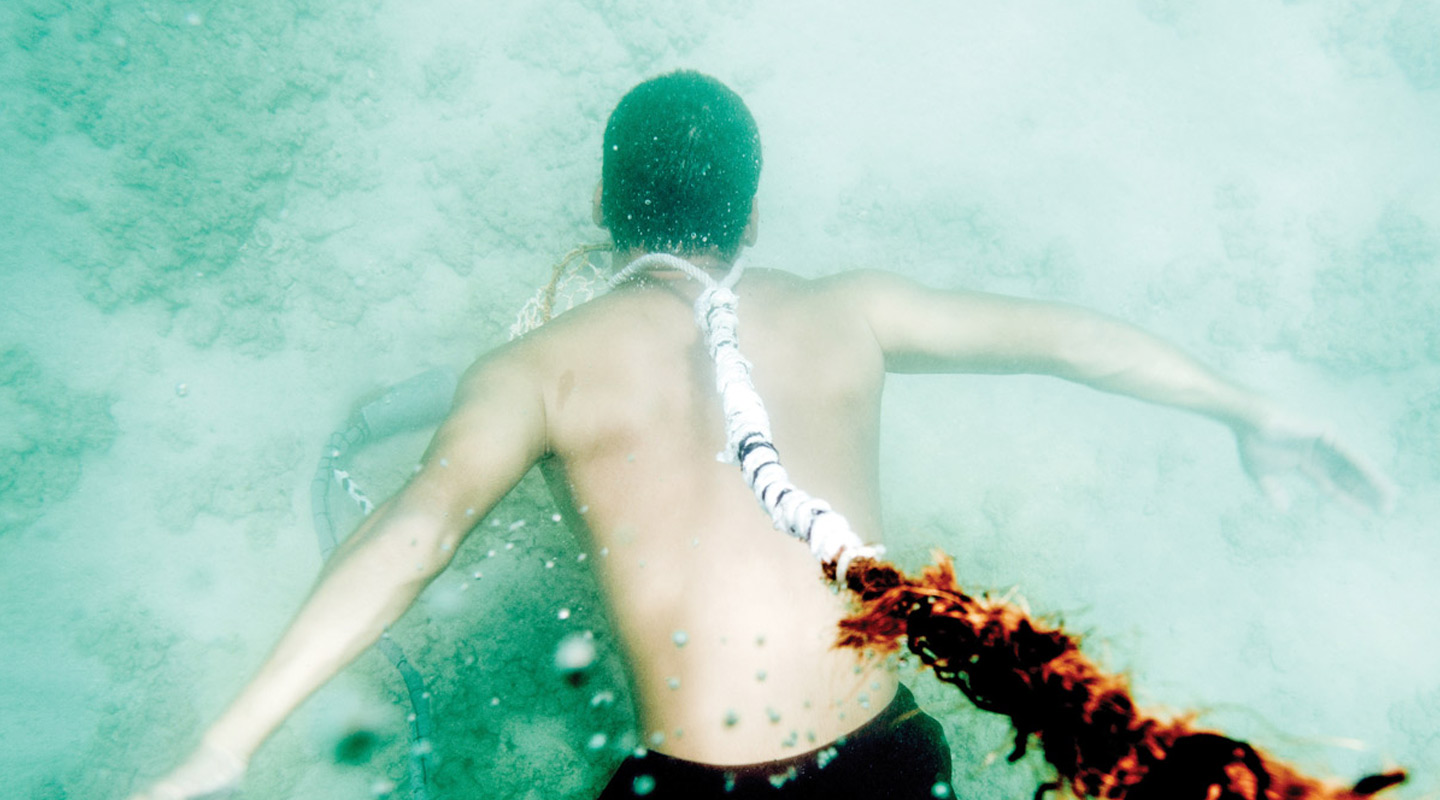 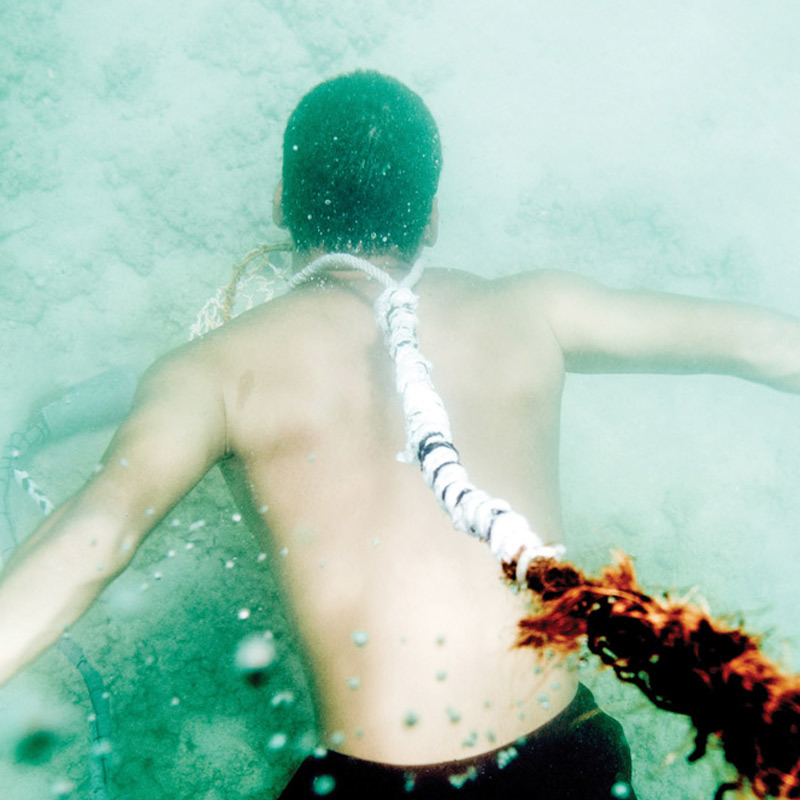 Kuwait ethnomusicologist Ghaz Al-Mulaifi reveals the pearls and music gems beneath the surface of the Arabian Gulf.

‘All the men died at sea,’ Ghazi Al-Mulaifi’s grandfather would respond, every time his inquisitive grandson questioned him about his days as the master of a Kuwaiti pearling ship during the 1930s and 1940s. Naturally, his grandfather’s ambiguity only served to exacerbate the young Al-Mulaifi’s interest. ‘Who was this grandpa-captain of mine, who didn’t want to talk to me about the sea?’ he wondered.

As Al-Mulaifi – now a 37 year old PhD candidate in ethnomusicology at New York University – became more and more interested in music as he grew older, he found himself increasingly drawn to one particular aspect of the Kuwaiti pearl diving tradition – its soundscape. 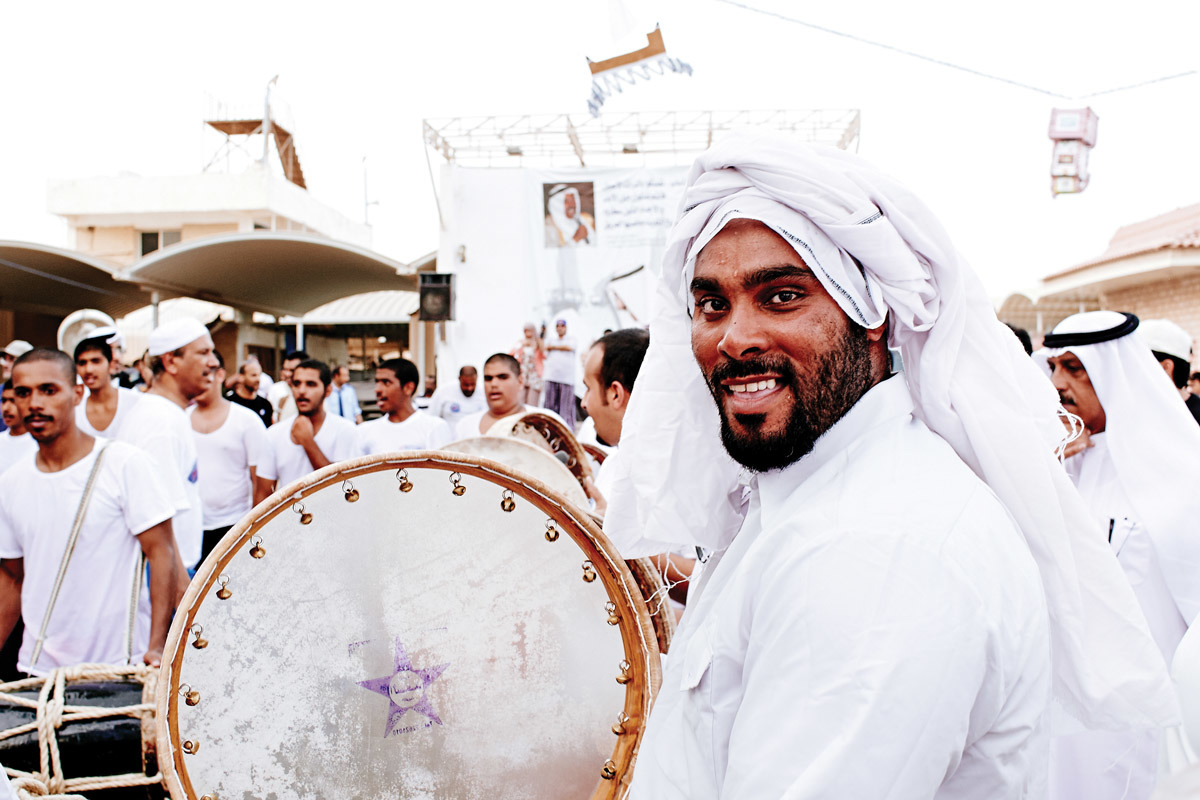 For Al-Mulaifi, focusing his dissertation on the arcane music of Kuwait’s pearl divers was about a lot more than satisfying doctoral programmes’ supposed lust for the obscure and parochial. ‘Thinking about the opportunities that I have because of my Grandpa’s hard work and suffering, remembering little things like the way he cleaned his ears, sticking a Q-tip ridiculously far inside because he blew out his eardrums while pearl diving – I want to pay respect to him.  I’m just one of many Kuwaitis whose ancestors toiled at sea. It’s not something that should be forgotten or made light of.’

Traditionally, the nahaam stands in front of the crew by the captain on the poop deck, exhausted from working sunrise to sundown, weakened by cyclical illnesses and longing for distant families. It is his duty to absorb the crew’s negativity, and to channel it back to them using his voice. He chants melodically while, in the background, they collectively hum a monotonous, drone-like note. To each refrain, they respond in unison with a ‘whoosh’, like a wave before it crashes, and a rhythmic clapping, like a fish flopping on the surface of water. One crewmember plays a large drum, maintaining a beat for all to follow.

The nahaam addresses God, pleading for a safe passage home. He anthropomorphises a both beloved and despised sea, urging it not to fear its Maker and to repent – ‘toob, toob ya bahr.’ He praises the caretaker captain. He laments the discomforts of a cramped life offshore. 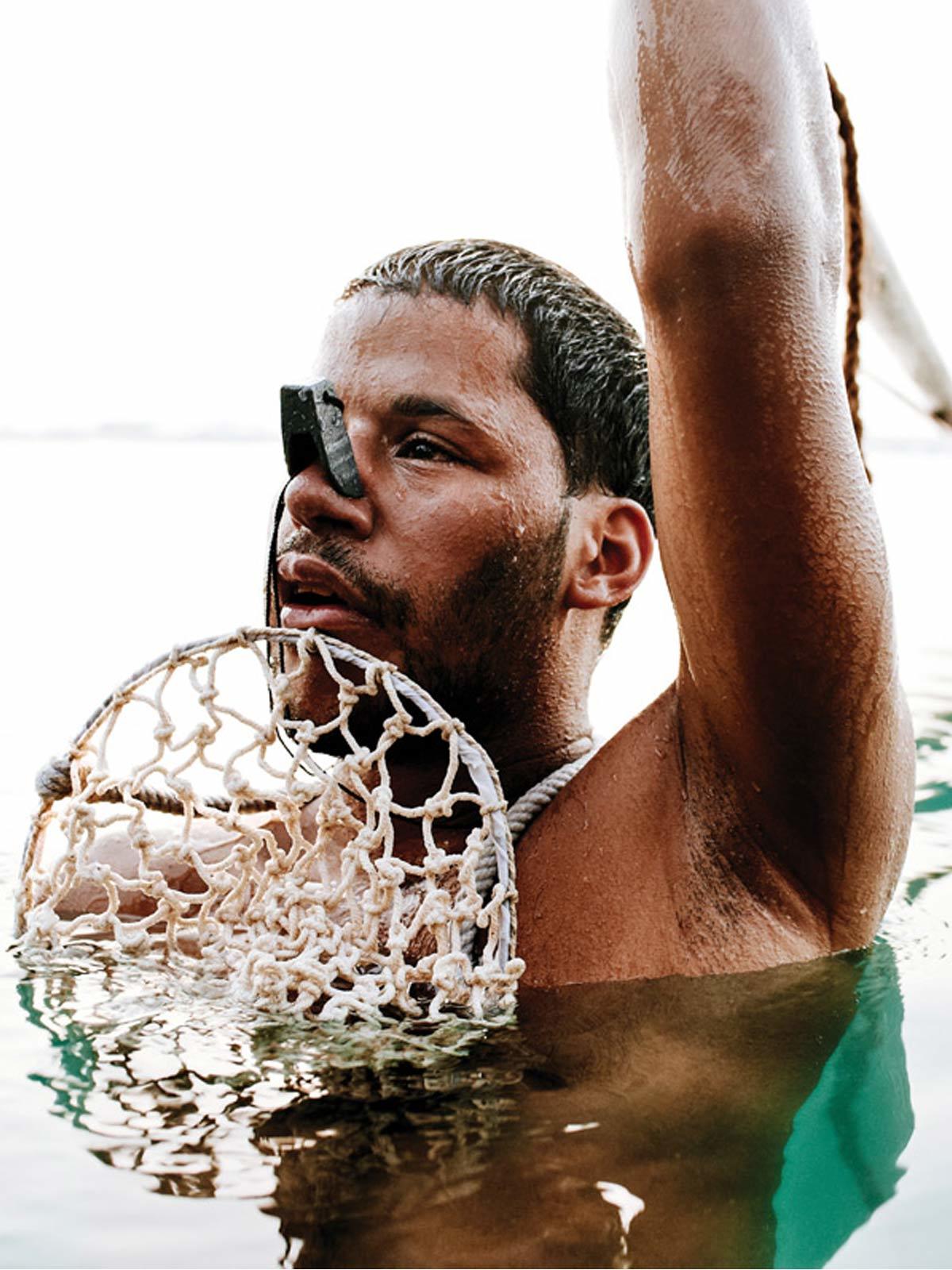 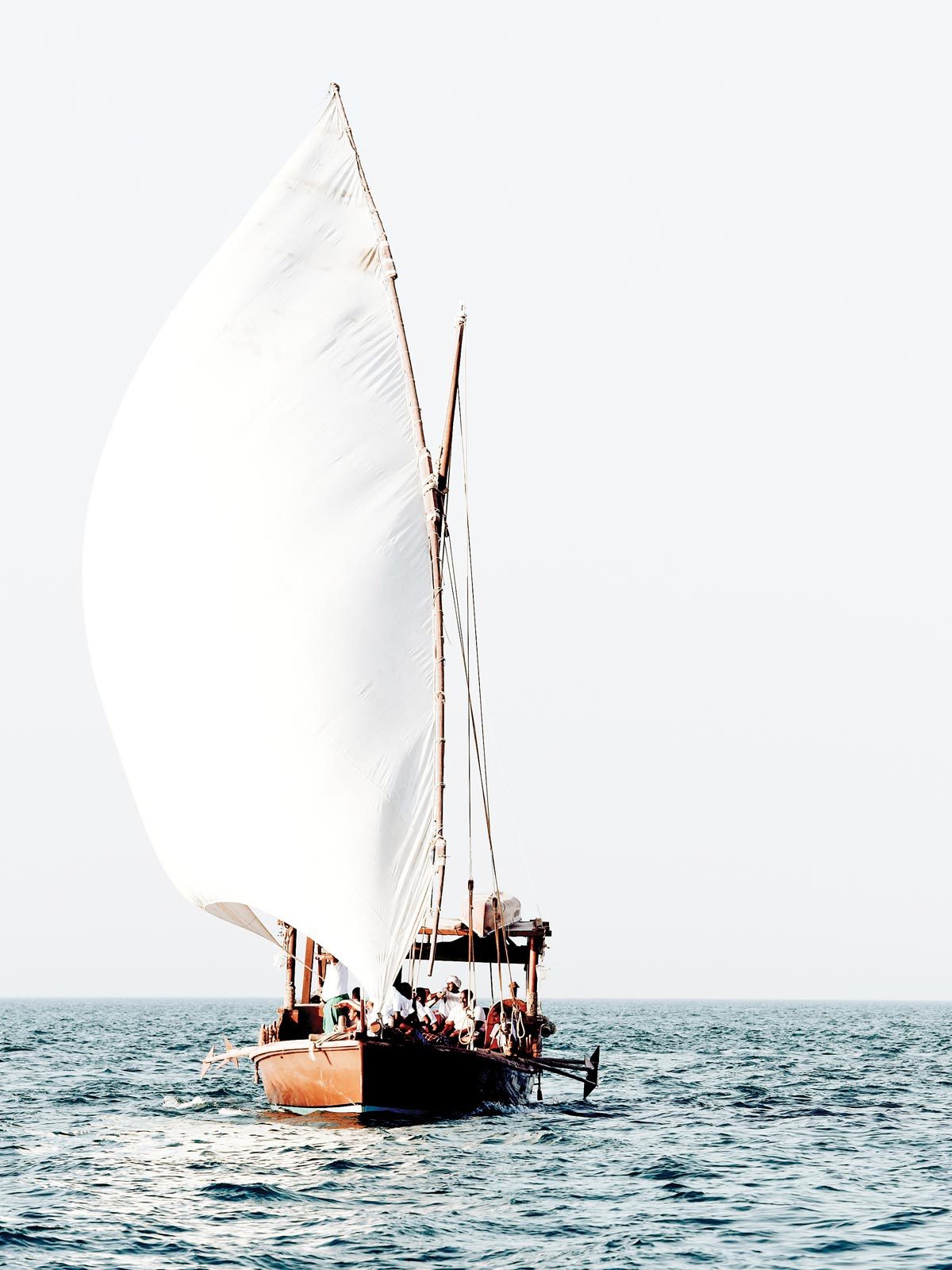 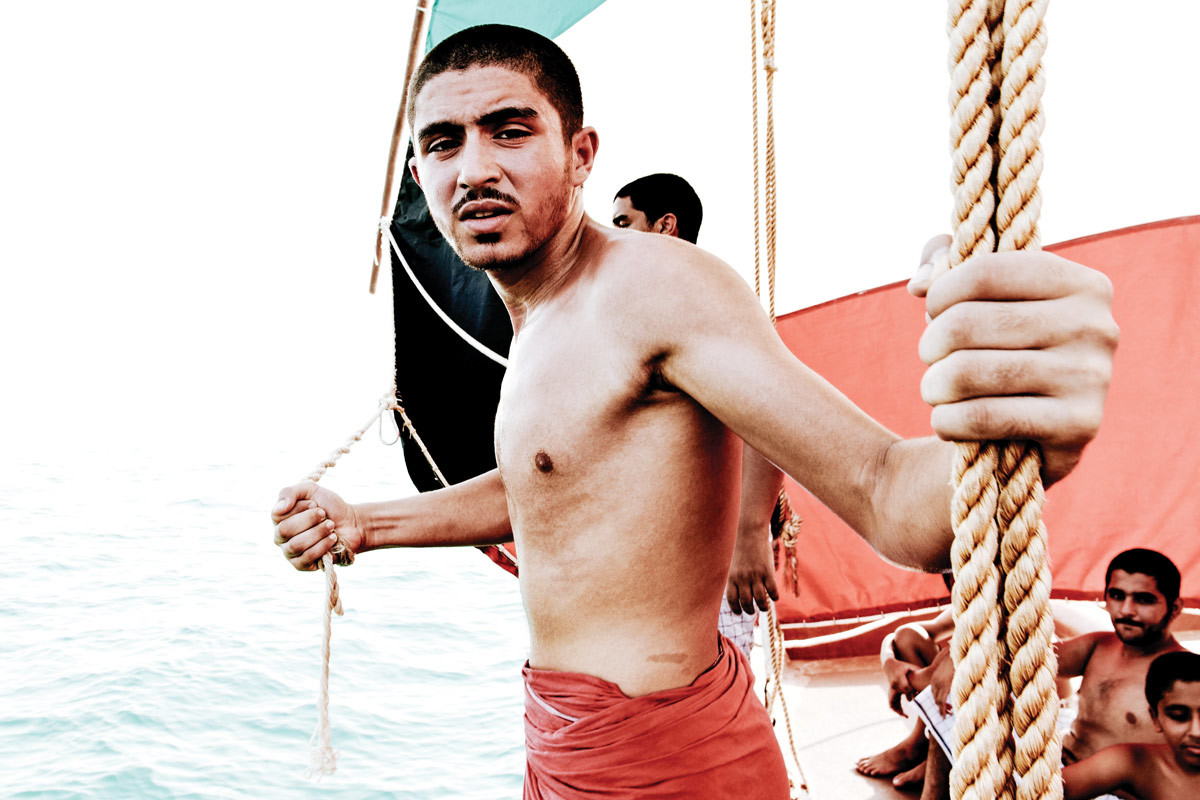 Top left: The rhythm of singing helps the crew to work together and raise the ship's sail.
Bottom: The divers' songs mix African beats, Indian melodies and other influences from the trade.

‘In my opinion, pearl diving wouldn’t have worked without the music,’ says Al-Mulaifi, ‘because it wasn’t just therapeutic but necessary to have harmony on the boat, as well as a psychological and spiritual release. It had not just a utility, but a tangible function.’ Songs were assigned like manuals to a variety of tasks. ‘It would sometimes take 10 guys to raise a sail on a windy day. If their motions weren’t synchronised it could be dangerous. The rhythm of a song would put the crew into a dance. Certain parts of the beat meant pull, others meant wait, and so on. It not only made work safer, but it allowed the crew members to commune with each other using their voices.’

In the Kuwait of today, Al-Mulaifi explains, pearl diving music manifests as a performance, rather than an expression, of heritage. Understandably, he points out, a nation has to project some kind of unified identity. ‘But the music you hear at official heritage festivals or cultural events is less personal, more show. It doesn’t account for the multitude of experiences that are linked to this music, and it doesn’t help foster exchange. It’s a curated presentation of people’s lived experiences. Some things get erased.’ For the ethnomusicologist, such national events fail to capture the cosmopolitanism of Kuwaiti pearl divers, who spoke many languages, jammed with Zanzibaris and southwest Indians, and spent their lives in conversation with now seemingly distant others.

‘Pearl diving music isn’t Kuwaiti music to me. It’s so dialogic.  Sure, Kuwaitis perform it but you can hear African beats, Indian melodic motifs and an amalgamation of all these influences that exist because of trade – the greatest vehicle for cultural exchange. I want to find a way to put Kuwaiti pearl diving music back into dialogue with other cultures and still call it Kuwaiti,’ says Al-Mulaifi.

This is partly why he found himself sailing the Kuwaiti seas for seven days with a fleet of pearl diving ships last summer. Every year, Kuwait invites local young people to embark on a highly publicised pearling exhibition following several months of training. Al-Mulaifi and his friend and photographer Mike Krueger joined the kids on their journey – the two adults, respectively tattooed and completely lacking any formal training, contrasting quite starkly, to no one’s surprise, with the children. 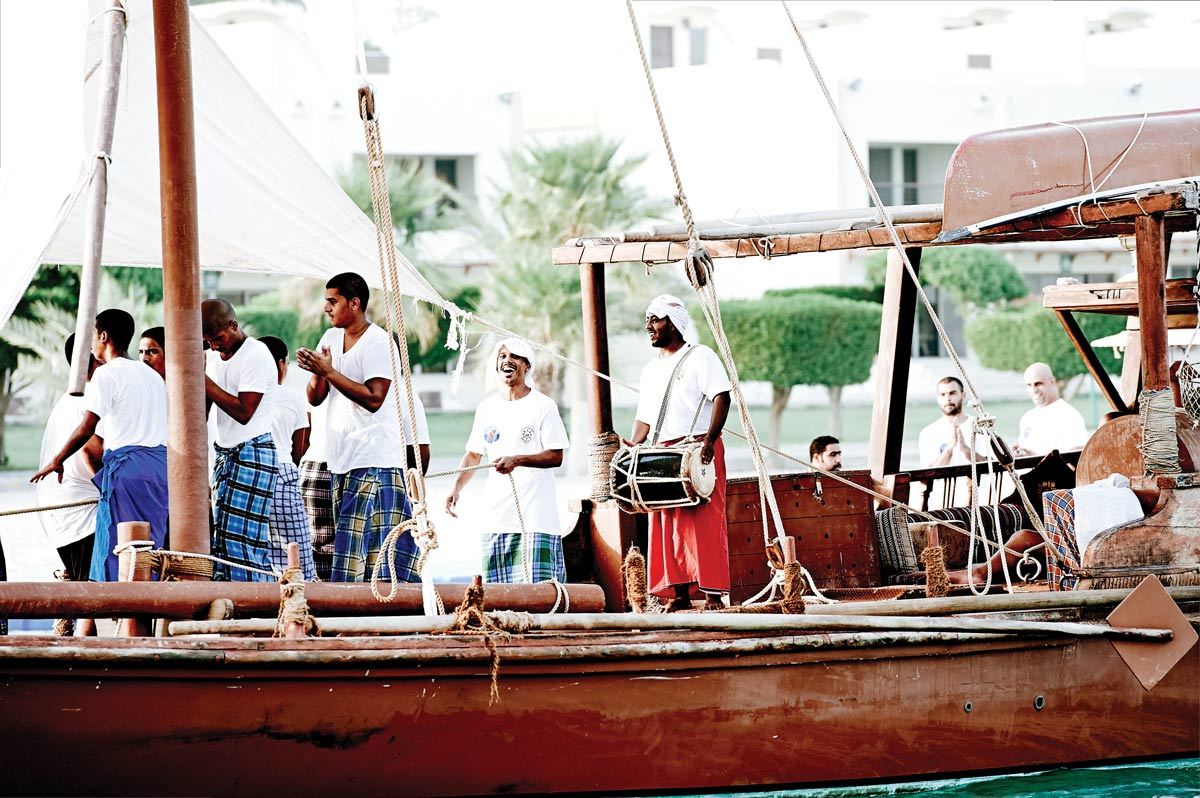 'It wasn’t just therapeutic but necessary to have harmony on the boat,' explains Al-Mulaifi. 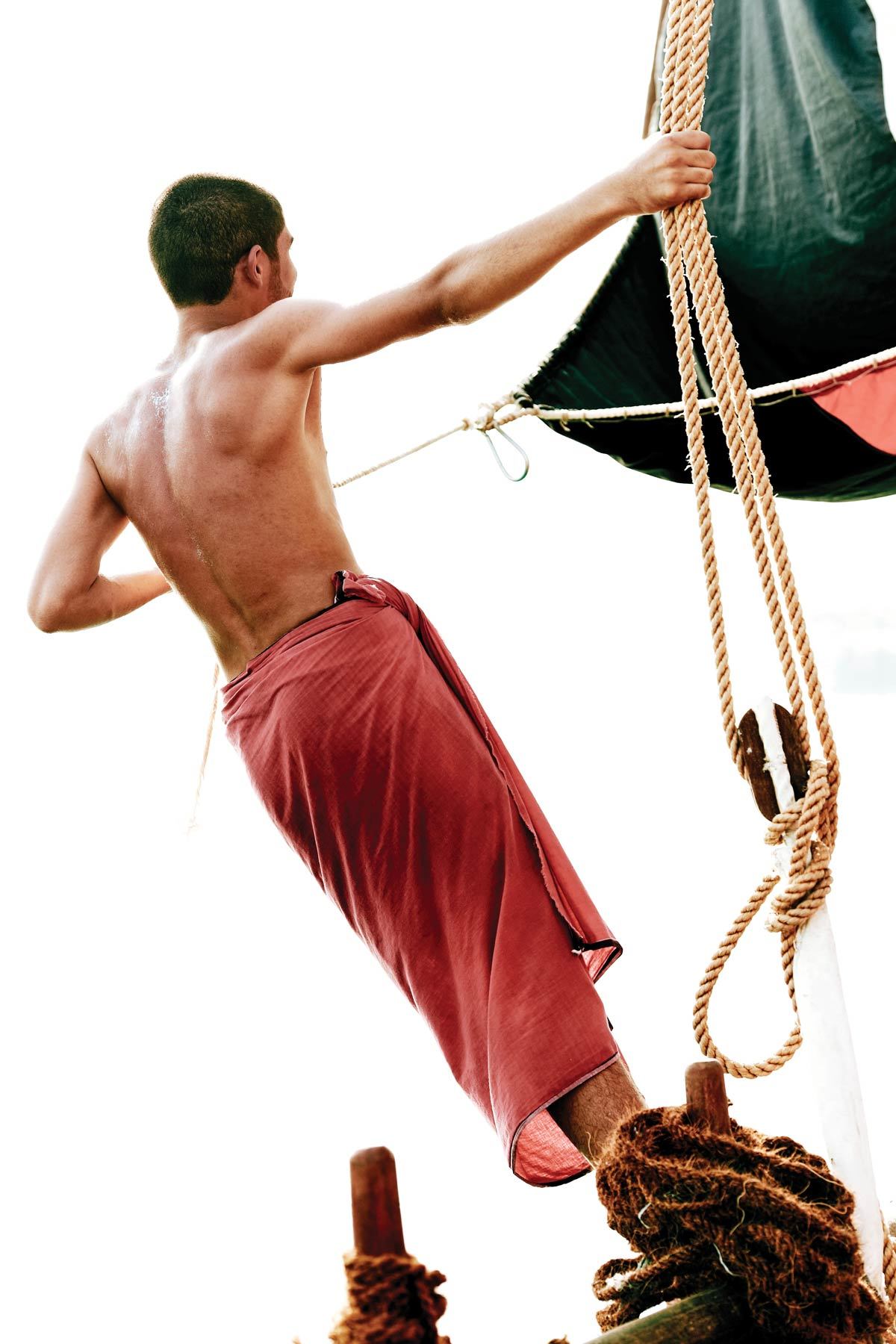 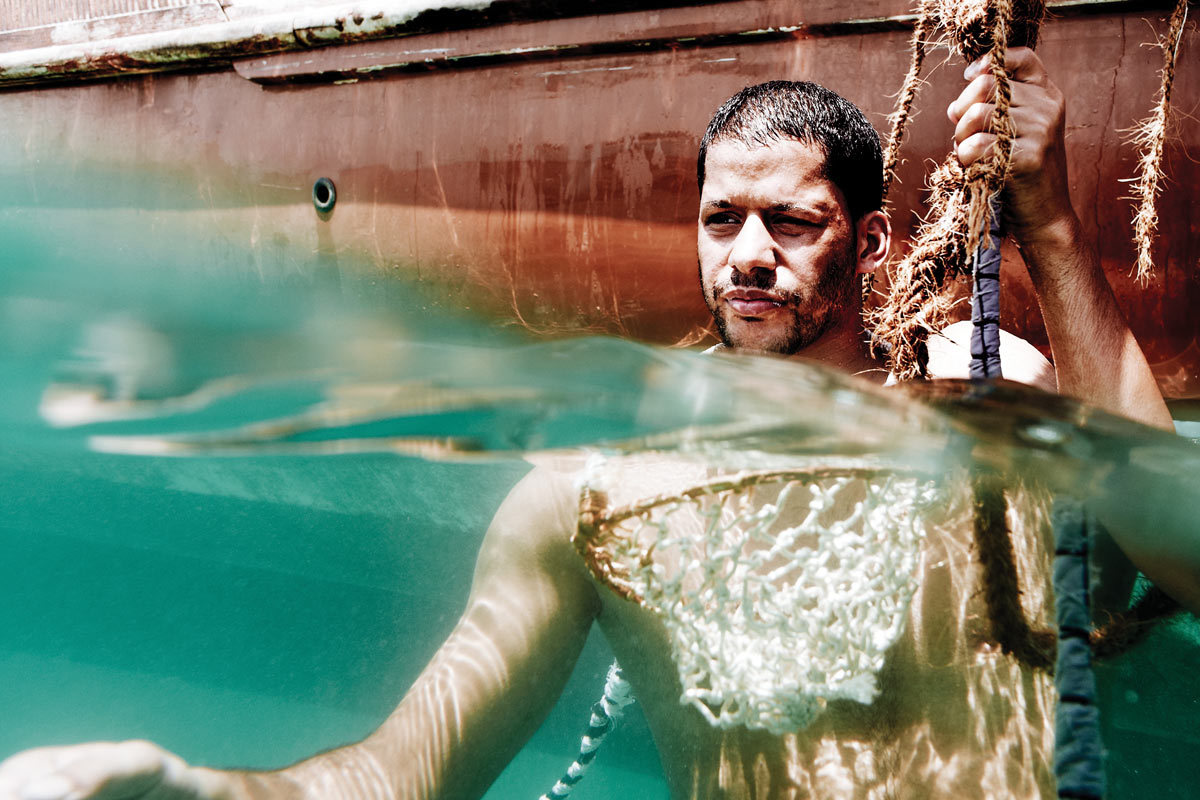 The seven days unfolded almost identically. The ‘crew’ would wake before sunrise and spend the day at sea, returning to the coastal city of Khiran, where they had set up camp, at around six in the evening. The only relief from the unbearable heat could be found within the belly of the sea. Al-Mulaifi watched the children get accustomed to the frustrations of pearl diving, noting the disappointment on their faces whenever their efforts beneath the water resulted in nothing but treasure-less oysters. ‘Clear your intention, the captains would say. Get out of your own way, be pure of heart and you’ll find  a pearl. It was a powerful statement. It reminded me of Zen Buddhism and Sufism.’

Al-Mulaifi joined the expedition primarily for the chance to meet the ageing pearl diver Khalifa Al-Rashid, one of the last pearl divers of his generation. In a stroke of luck, he found himself on the boat Al-Rashid was captaining. ‘The first time we talked he said to me, “what are you doing here?” I said, “well, I’m studying Kuwaiti pearl diving music and I wanted to come here to see how you teach the kids and transmit corporeal knowledge to them.” And he goes, “so, you’re going to become a doctor. You read a lot of books. You sit behind a desk. You must know a lot of things.” I explained that I was trying to learn from him what I couldn’t learn from books, and he sort of dismissed me [laughs].’ 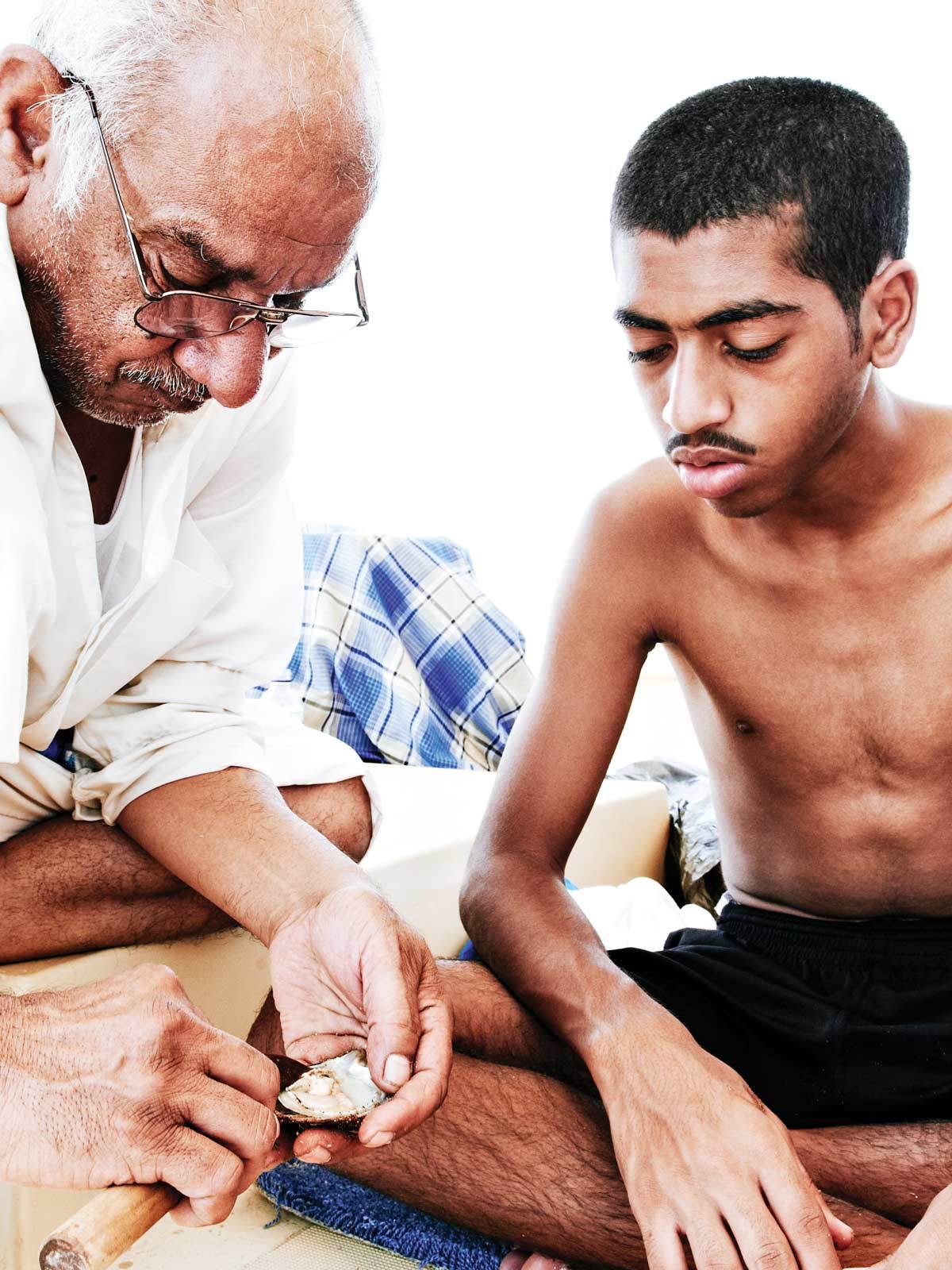 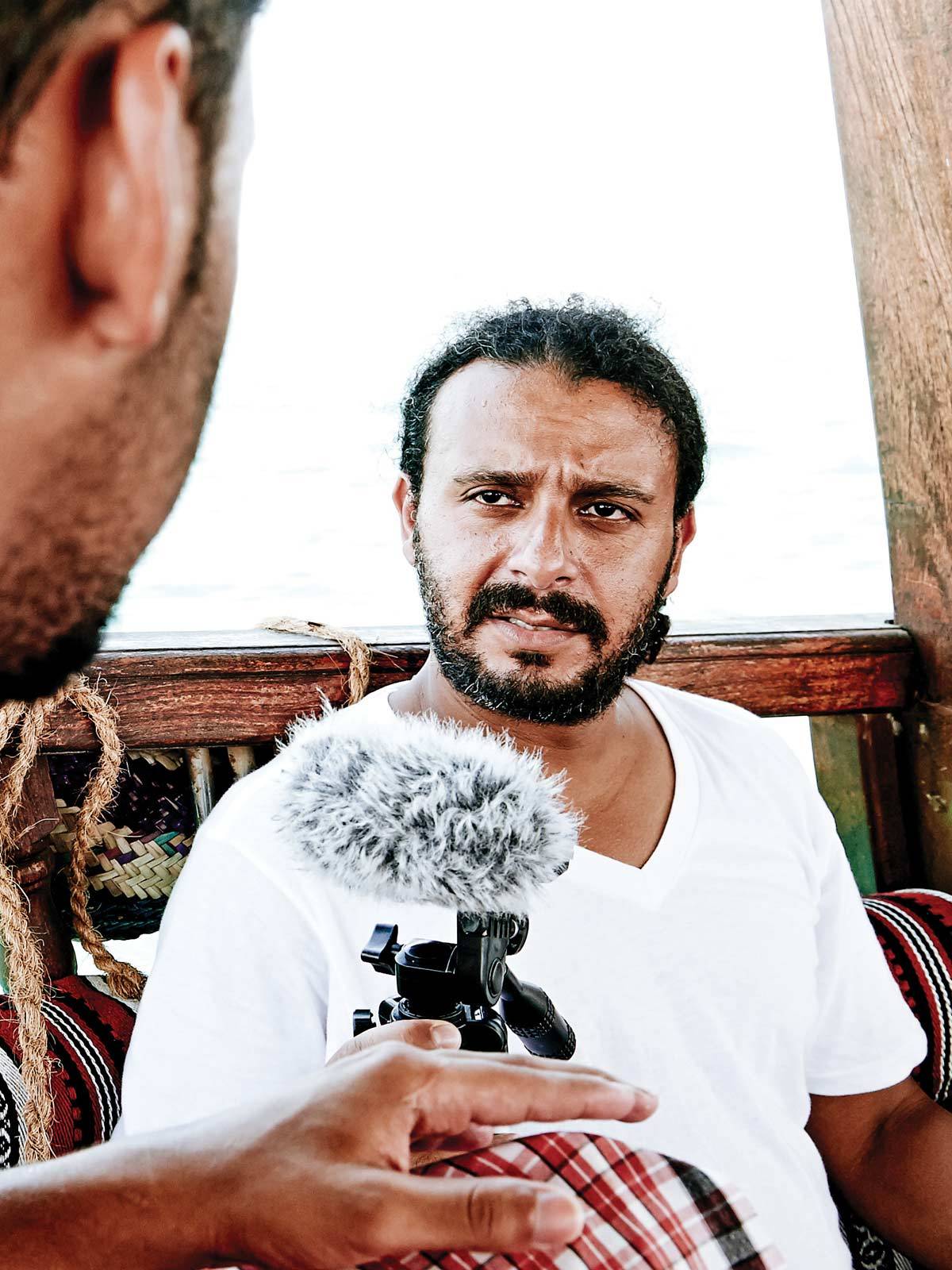 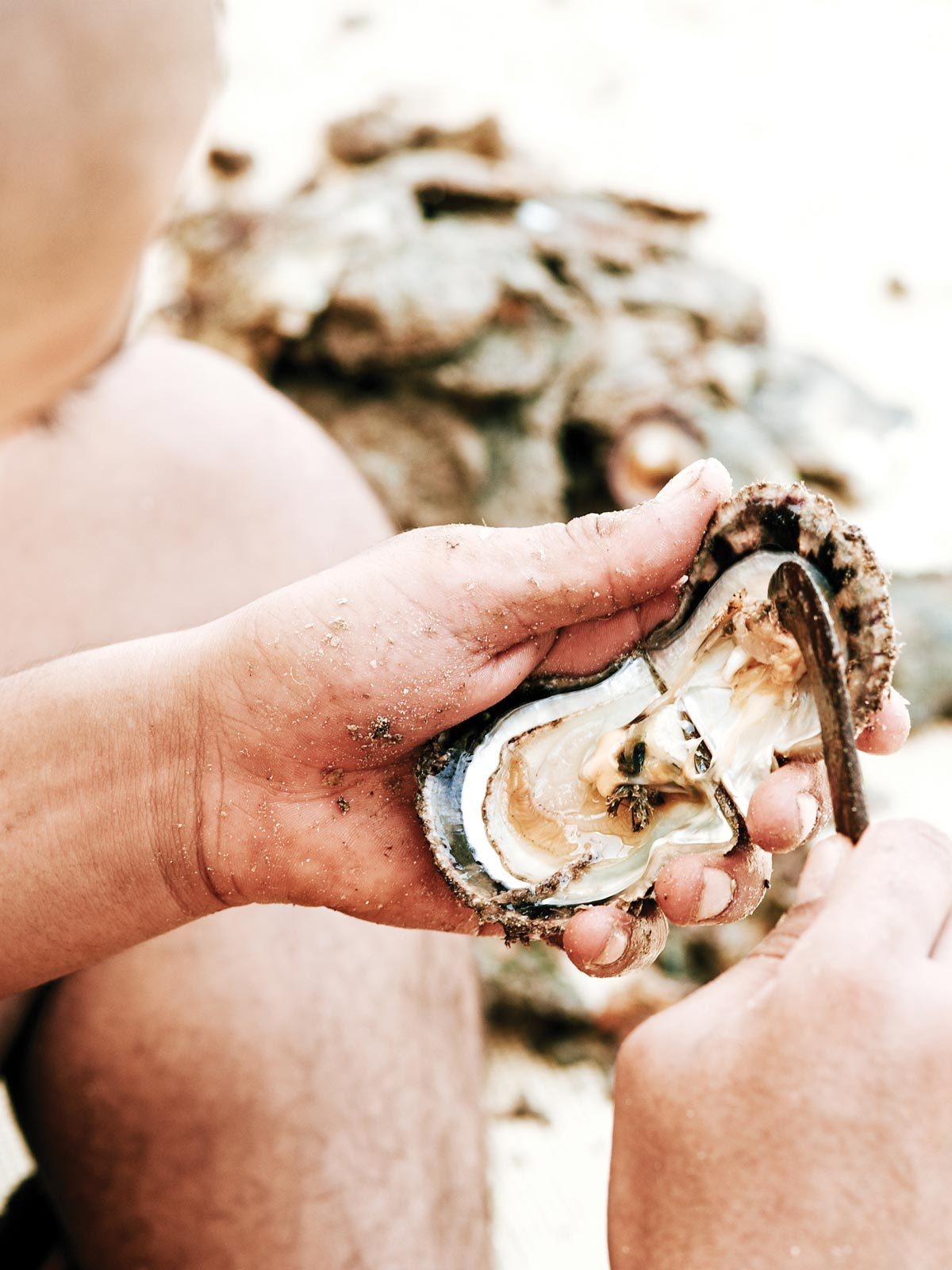 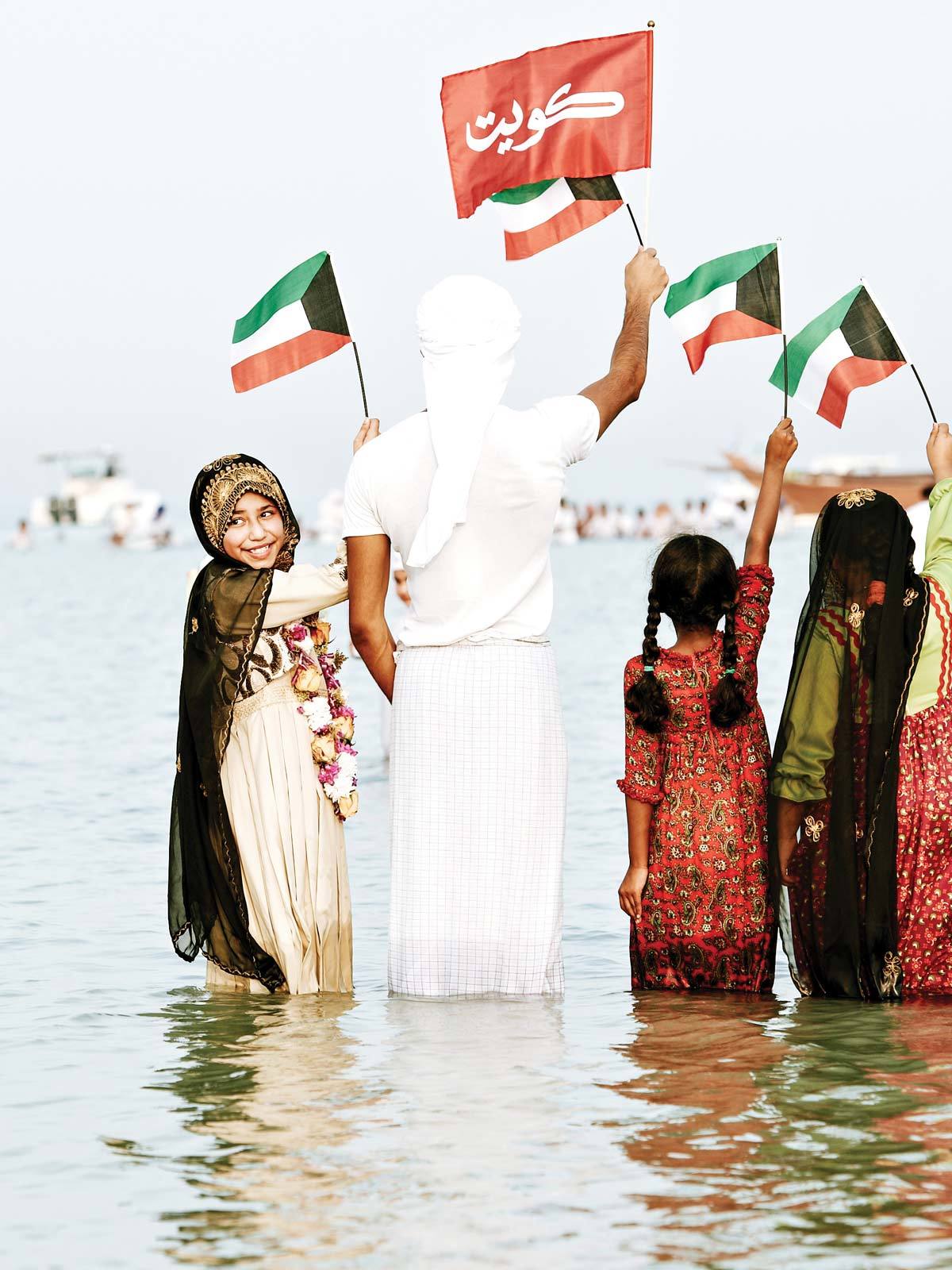 Top left: These trips are pedagogical in nature.
Top right: Unfortunately not all dives are successful.

Musical instruction was, naturally, an essential aspect of the expedition. An official from Kuwait’s Sea Sport Club led formal band classes out at sea, readying the children for the performance they were scheduled to give upon their return to shore. Al-Mulaifi, however, was more interested in the informal jam sessions – ‘that’s where the music was more alive and less of a presentation. If I listen to the kids singing at the national performance level, it doesn’t do much for me, but listening to old recordings or improvised jams,  I feel overwhelmed – like the music is a conduit for so much life experience, not all of which is pleasant.’

This isn’t, he explains, music he enjoys recreationally. ‘It’s not Michael Jackson. It’s more about remembrance, about keeping memory alive – embodied knowledge, and things like that. I listen to keep it alive, and I hope to perform it in one way or another. I’m just  a descendant of those people and I just want to engage with this music as a way of helping me get in touch with my past.’

A few days into the expedition, Al-Mulaifi decided to test his own ‘intention’ by joining the kids in pearl diving. Despite being a strong swimmer, he scrambled straight back to the surface after being dropped in the first time, shaken by the ineffable ‘bizarreness’ of the sea’s gut. The captain coaching him told him to relax, clear his intention and try again. ‘I sat there for five minutes, trying to slow down my breathing. I looked up at the captain and said “jabil”, which means face me. He said “sem” [name], and I said “bismillah” and let go of the rope. That time, I was able to descend.’
The experience linked him, in a small but meaningful way, to his grandfather. ‘Afterwards, I was telling one of the paramedics about how grandpa would never share any pearl diving stories with me, only ever repeating that “all the men died at sea.” The paramedic said, “what more do you want? The man gave you the butter. All the men died at sea.” After thinking about it and talking to some of the other men, I realised that was the whole point. People never complained about anything. That’s why they didn’t talk about the sea. It was ayb – shameful.’ 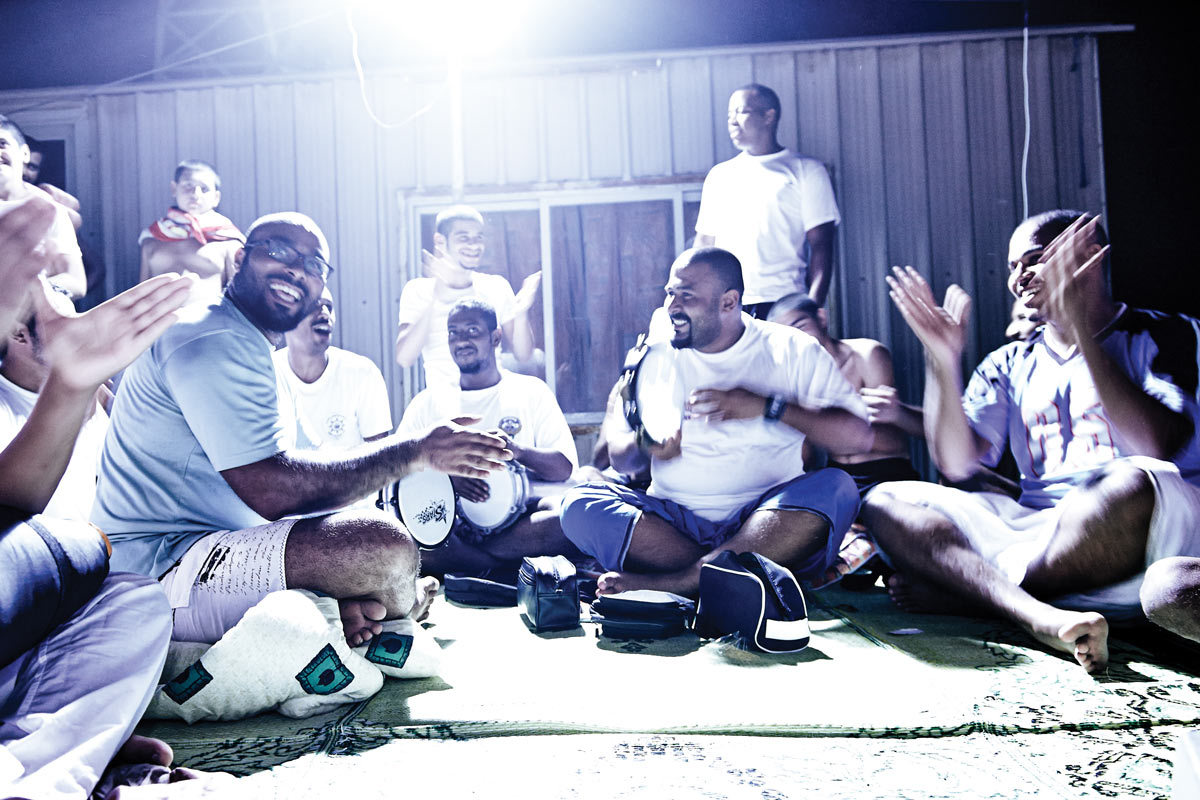 After setting up camp, the pearl divers gather in song for the evening.