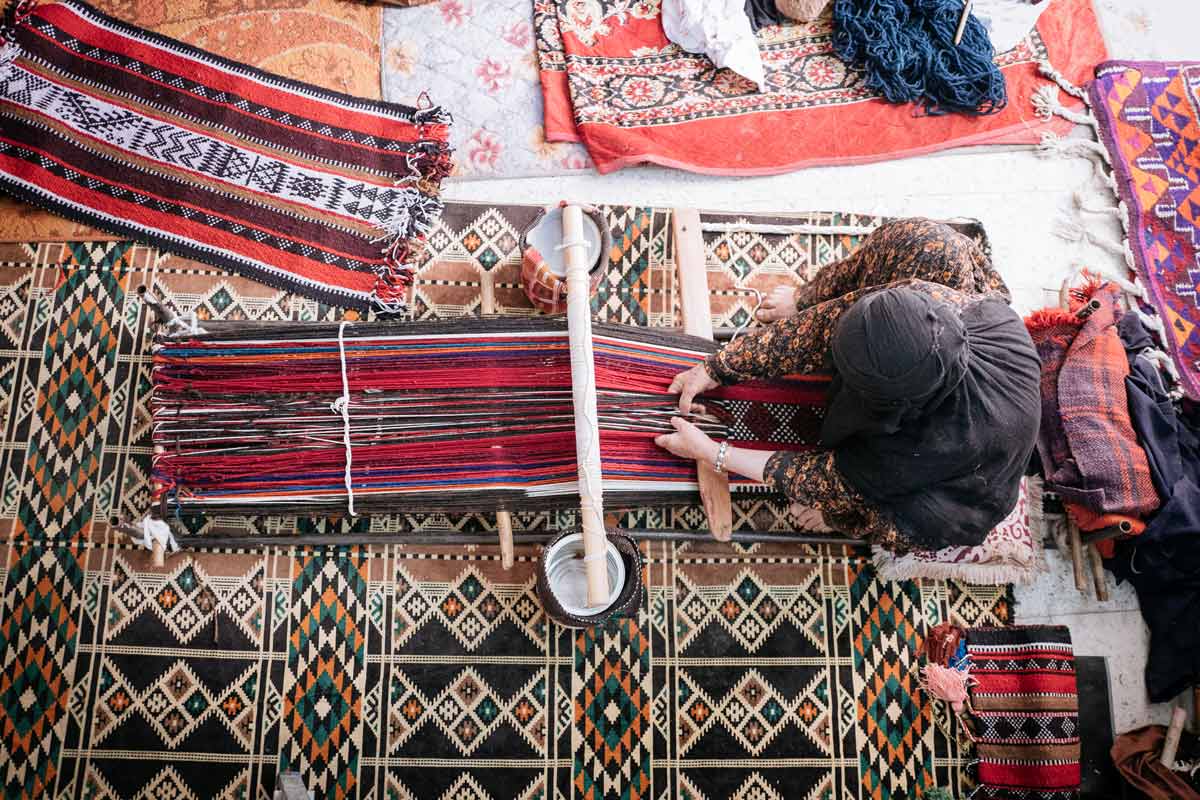 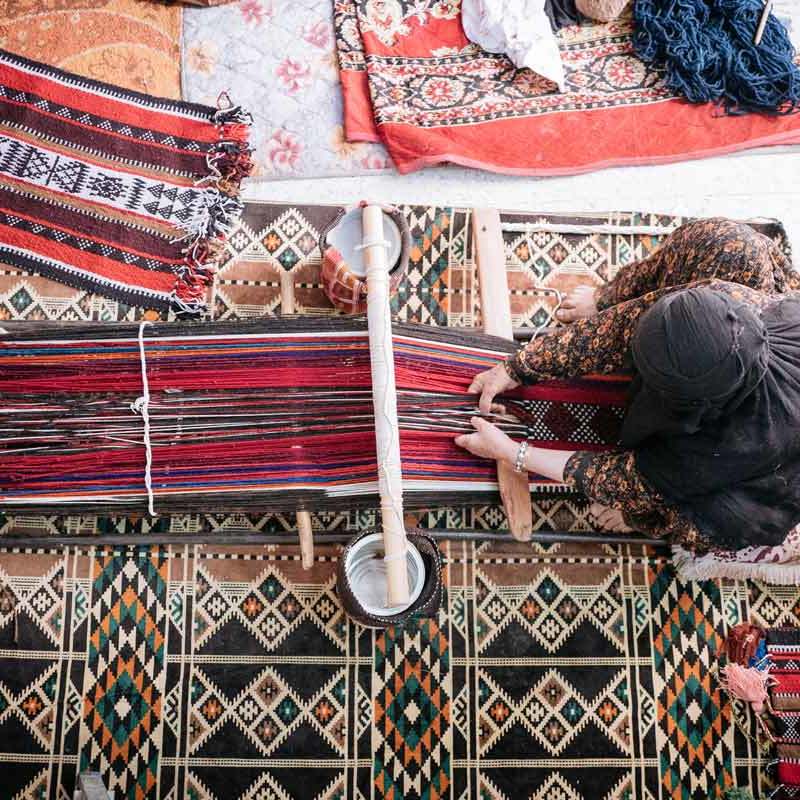 ‘I have seven daughters. Seven,’ says Um Fayez, holding up seven tattooed fingers. ‘And only one son,’ she continues.

Um Fayez has been a sadu weaver since she was 15, maintaining an age-old Bedouin tradition refined through centuries by the Arabian Peninsula’s nomadic population. Sadu textiles have been used to make Bedouin tents, carpets and pillows and decorative accessories for camels or horses. 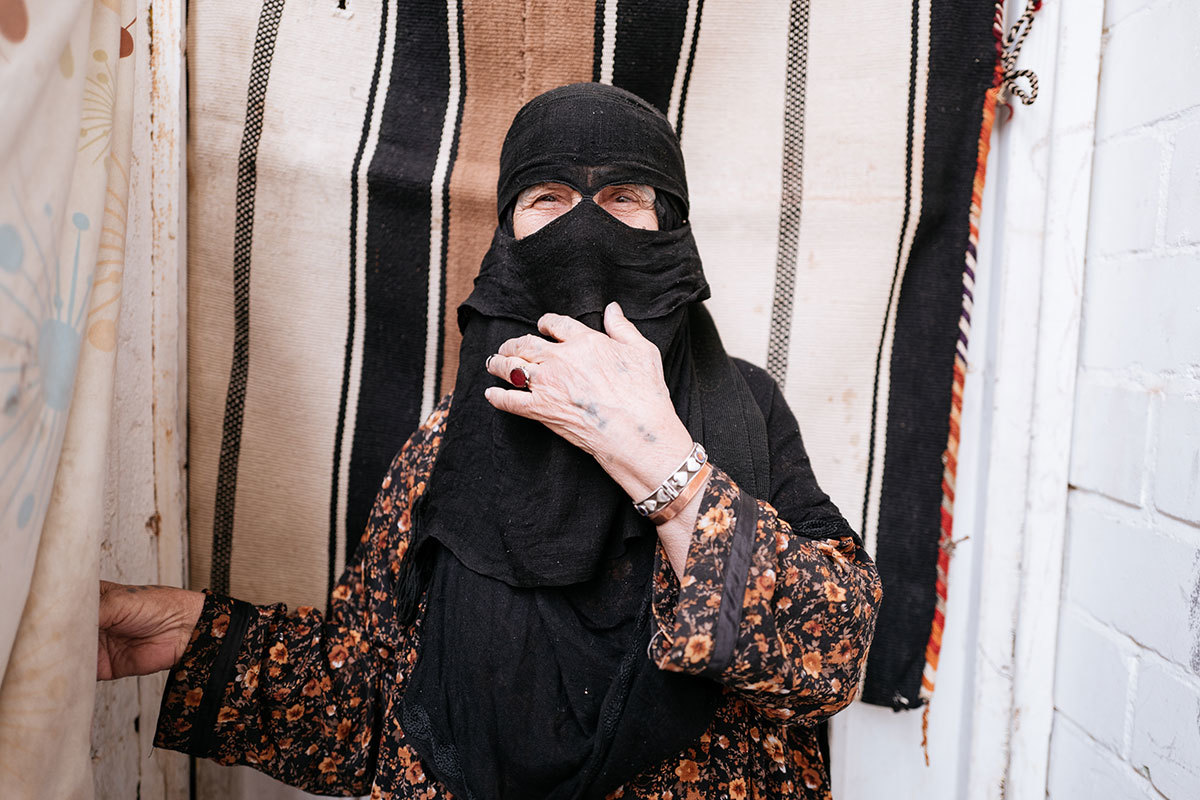 Um Fayez stands in front of her favourite piece of sadu

‘I love this stuff,’ says Um Fayez, holding up a handful of deep, tan woollen fluff. Her eyes light up as she starts spinning it onto a spindle.

‘This is camel. I don’t dye it when it’s camel, I keep it natural. When I get sheep’s wool I dye it red, green or purple – or I keep it white. Black wool is hard to get, because black sheep are rare. But I like that too.’ 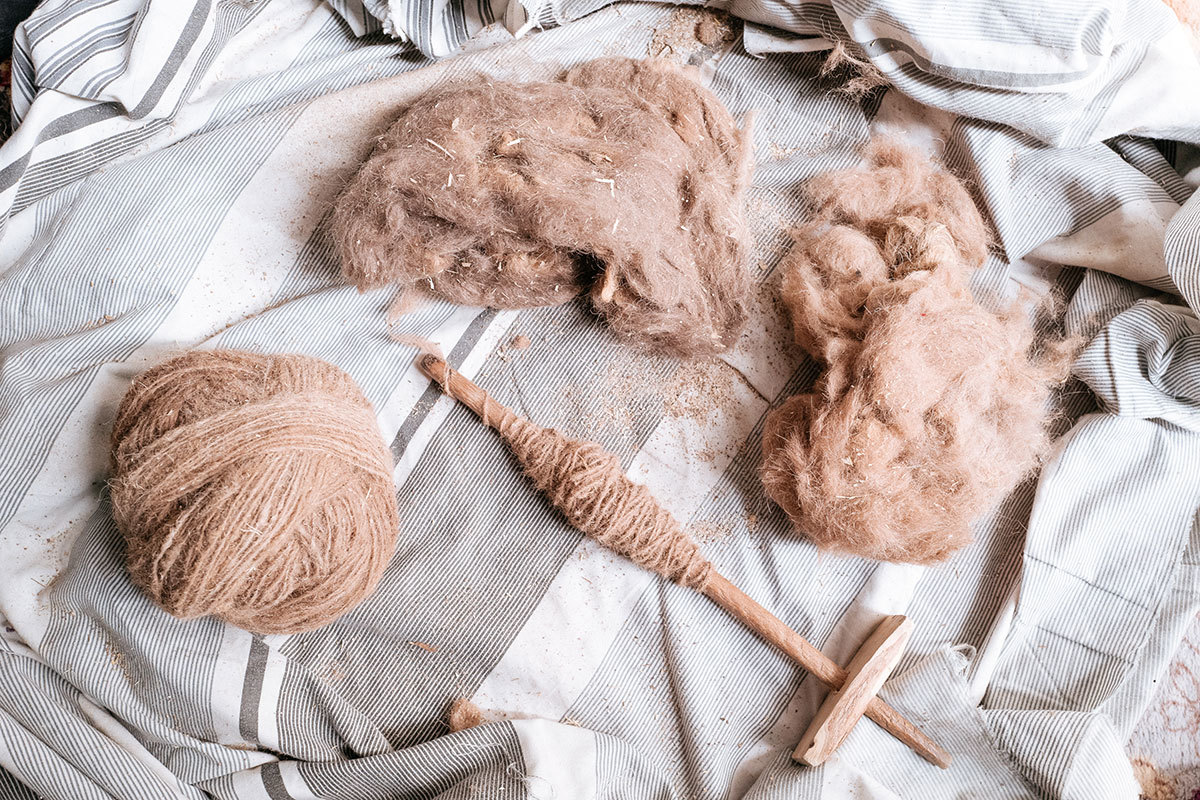 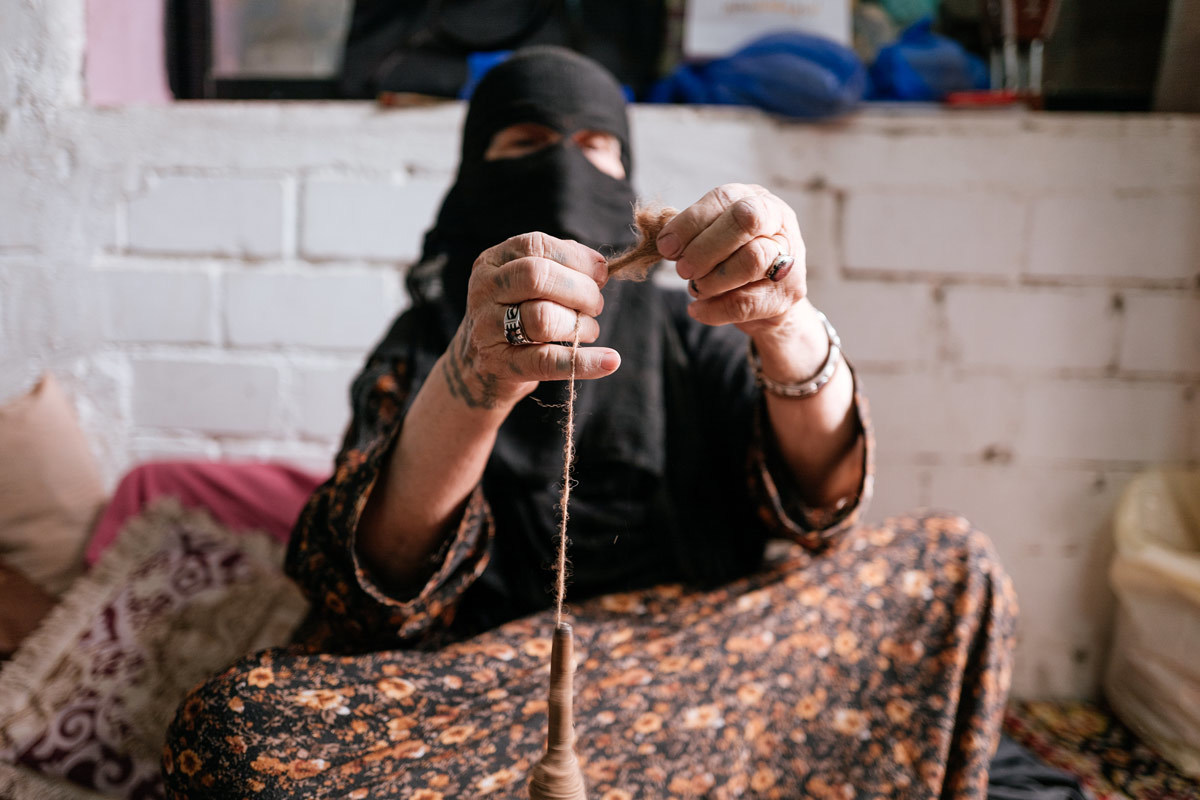 Top: The natural camel hair is placed on a piece of cloth to capture all the dirt falling out during the process of spinning it into yarn

The weaving loom – a simple construction made from wood and metal rods, propped up on two upturned condensed milk cans – takes up much of the main room of the small house, which has two bedrooms and a bathroom at one end, housing the large family.

‘The happiest I’ve ever been was when weaving outdoors in a tent. I took part in a cultural fair, and I had a tent as big as this entire house only for my loom,’ says Um Fayez.

Orphaned at a young age, Um Fayez was taught how to weave by el umahat el habayeb, the ‘beloved women of the tribe’. Sadu weaving traditionally gets passed down from generation to generation. Young girls assist in the making of wool and weaving as they grow up, becoming fully initiated weavers by the time they turn 16. The craft is a highly utilitarian one: Bedouin women across the region have traditionally made the tents for their tribes, called abyat shaar, literally ‘houses of hair’.

‘It’s a long, tedious process but the result is worth it,’ says Um Fayez as she spins the unruly wool into long, elegant strings. 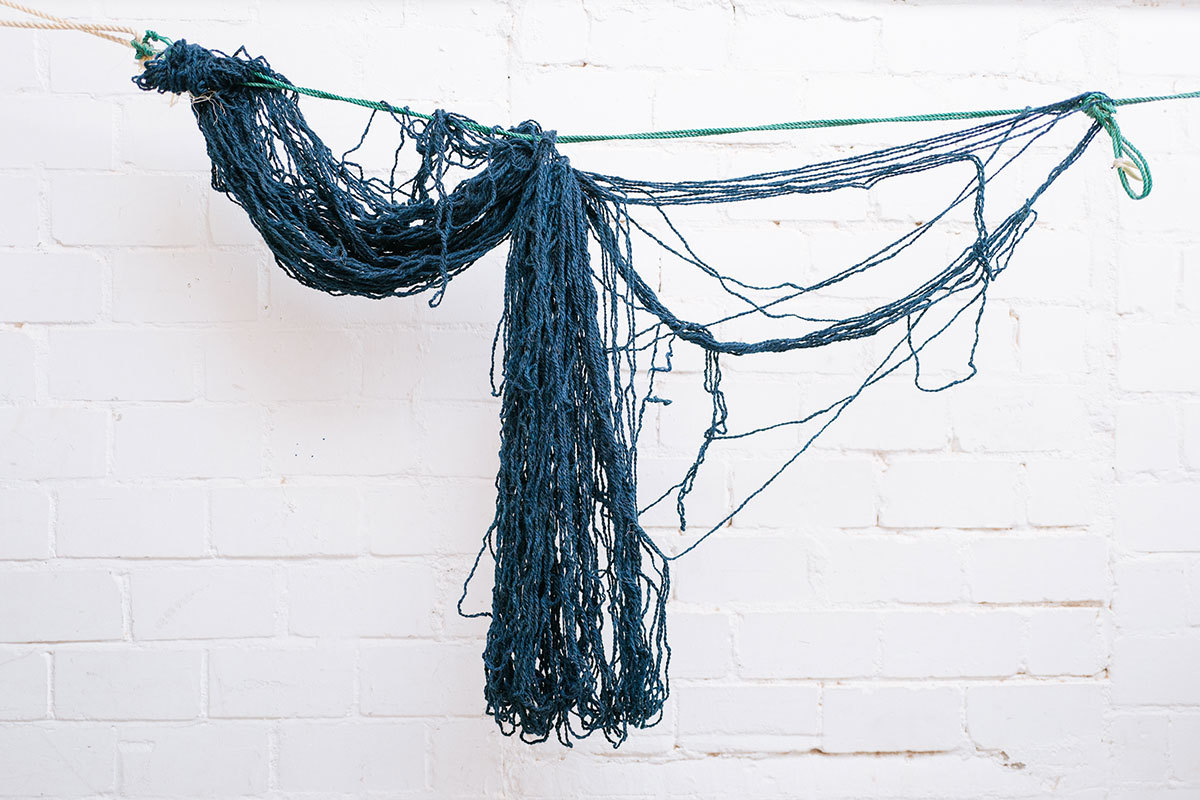 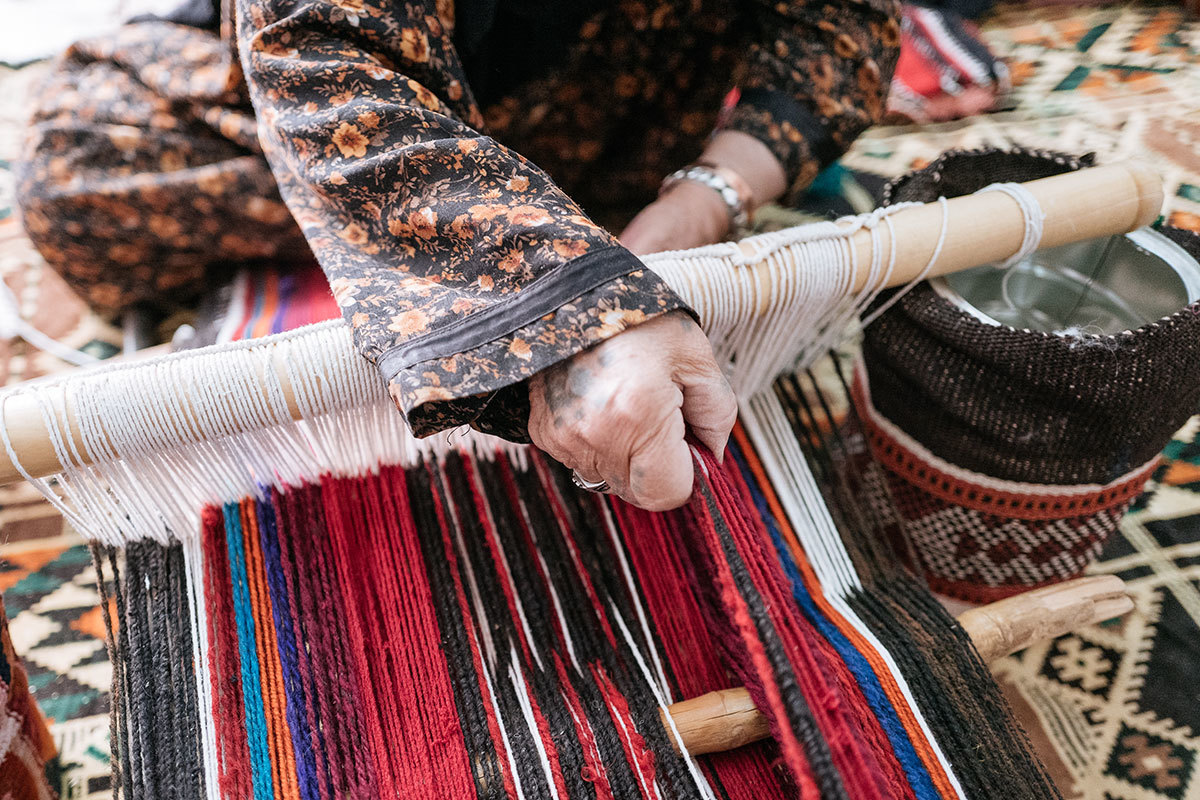 Bottom: White threads form the skeleton of the sadu, through which the weaver pulls and braids the coloured yarn

Before spinning the wool Um Fayez washes it, to ‘take the stink out,’ as she says. It’s then dyed into a multitude of colours, using both natural and synthetic dyes. Sadu used to have only natural shades of black, white, brown and dark purple, green or red, but now comes in orange, yellow and bright pink as well. Once dry, the wool is turned into balls of thread that can be easily woven. 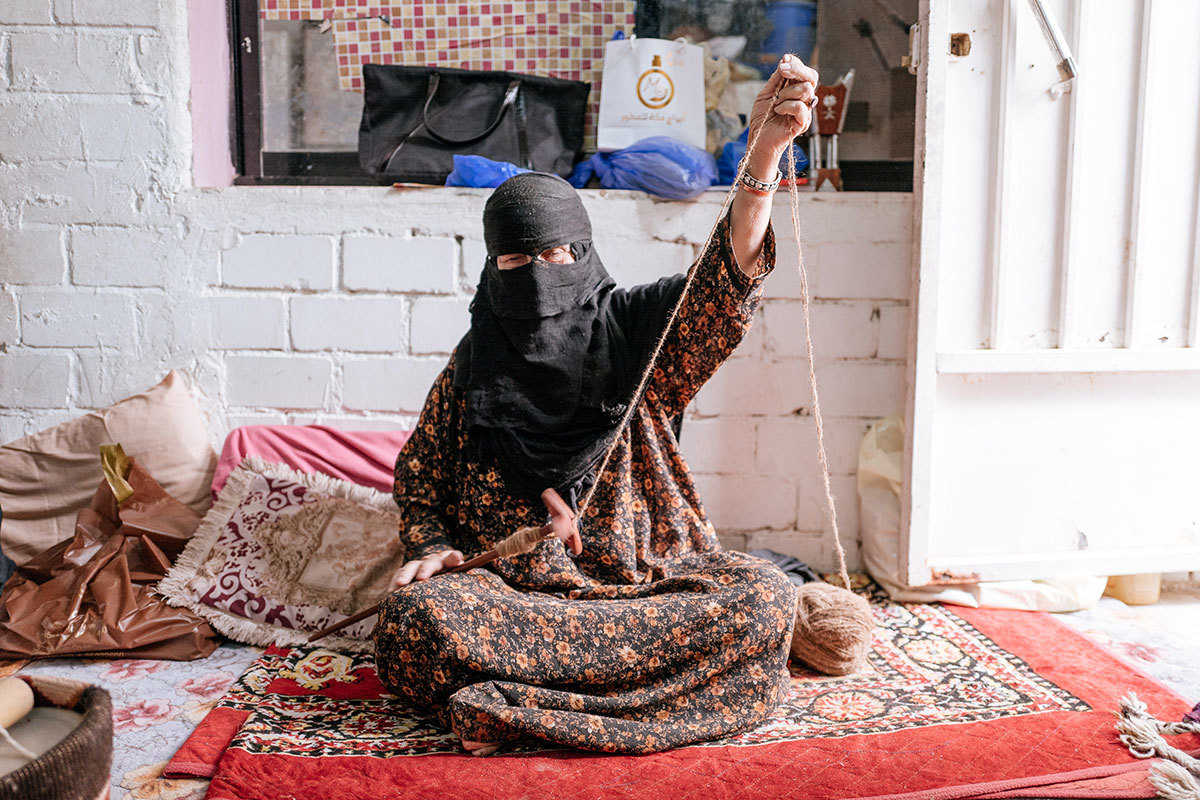 Spinning the camel hair onto a needle takes dexterity and endurance

Um Fayez crouches to sit down at the loom on the floor, keeping both feet on either corner – a pose impressive for a woman of her years. She begins weaving the sadu, expertly placing the black threads so that they form the basis of a diamond. The coloured threads are lined up one after another, and Um Fayez uses a wooden plank to push them into place. Soon, the diamond takes shape, almost like pixels loading to make a pattern. 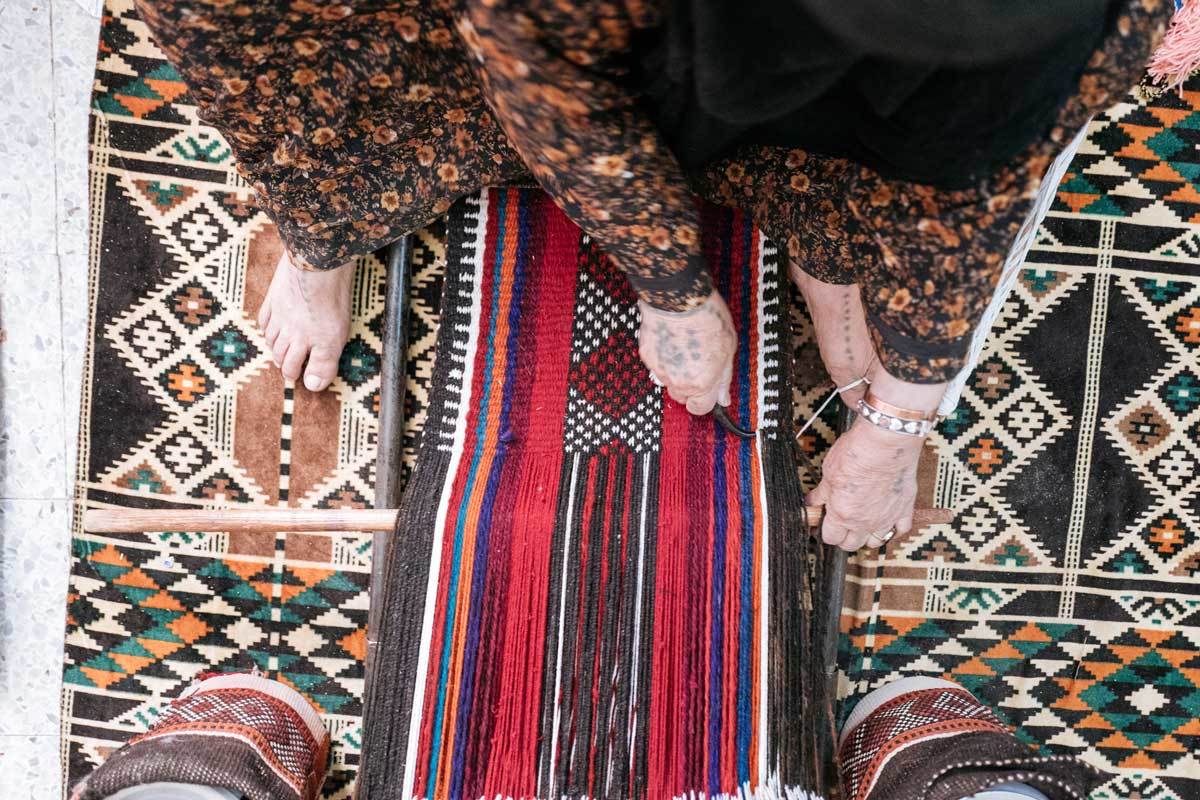 ‘That’s a shajarah,’ she says, pointing to a complex weaving of zigzags, crosses and diamonds. The pattern is described in Anne- Rhona Crichton’s book Al Sadu: the Techniques of Bedouin Weaving as ‘the most complicated design the Bedouin weave’, depicting different aspects of Bedouin life. Um Fayez zeroes in on one of the tiny images within the pattern, describing it as an incense burner.

The youngest daughter of Um Fayez, Mona, is seated next to her by the loom. ‘I don’t like colourful wool, or when they use nylon,’ she says. ‘You should see the work my mother does with tan and white wool, using just a little bit of black wool. It’s like a painting.’

Even though sadu does not make the weavers wealthy, it’s the sole sustenance for Um Fayez.

‘It allows me to provide for my whole family. My daughters went to school, they all got married. And some of them are in university now,’ she says. ‘I work as hard as I can. Women commission me, they bring their own wool and dyes. Some keep the sadu for themselves while others mark up the price and sell it in souks or to private buyers.’ 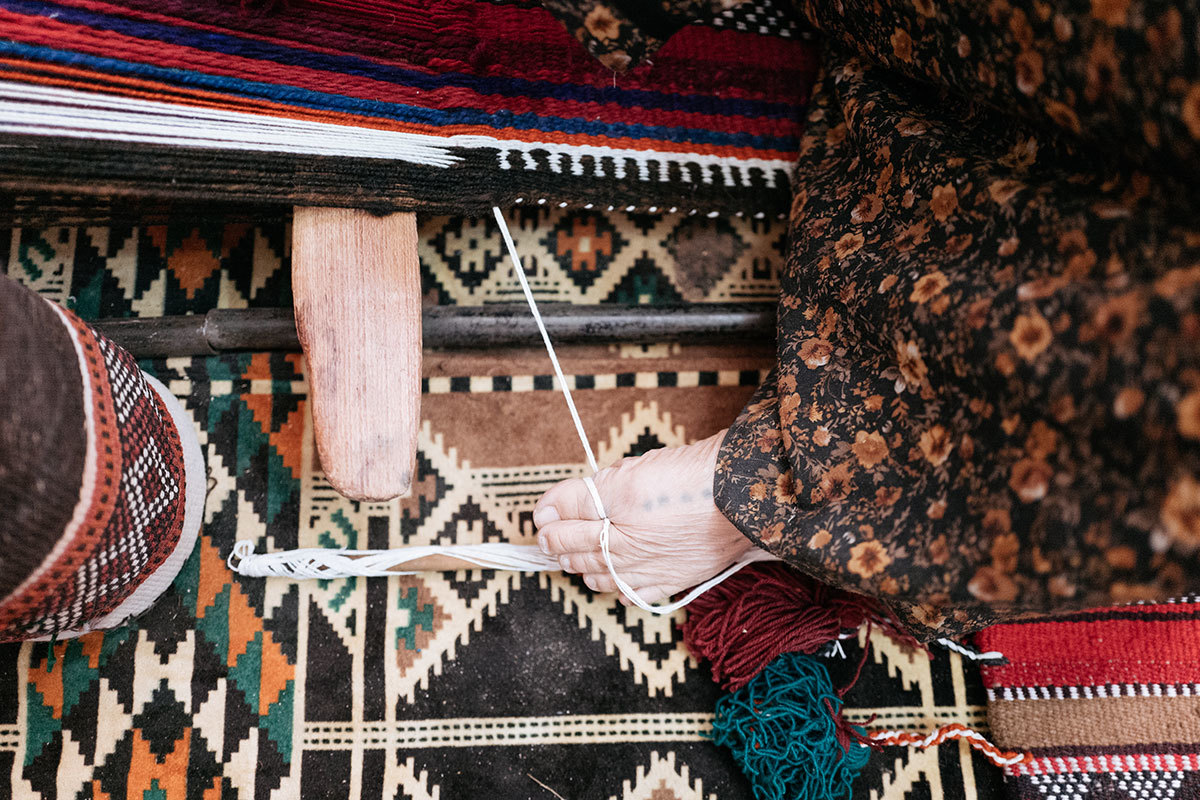 With the help of a piece of yarn tied around her toe, Um Fayez pushes each line of threads into place

In Kuwait, sadu has been given its due attention as an important part of national heritage. Bait El Sadu, for instance, gives workshops and exhibits woven pieces. Another initiative, Zeri Crafts, archives Kuwaiti craft traditions and gives those interested an opportunity to order bespoke rugs and wall hangings. Still, sadu no longer forms the strong way of living that it once did.

‘These were once houses in themselves,’ Um Fayez says about the wall hangings. ‘Now, they’re just decorations.’

Mona points to the white cotton threads that make up the skeleton of the sadu, upon which the woven patterns are built. The coloured threads, in many different shades, run vertically across. ‘It’s all very mathematical. You have to calculate each step,’ she says.

After every line of coloured threads is set, Um Fayez uses a large wooden needle to do the weaving. 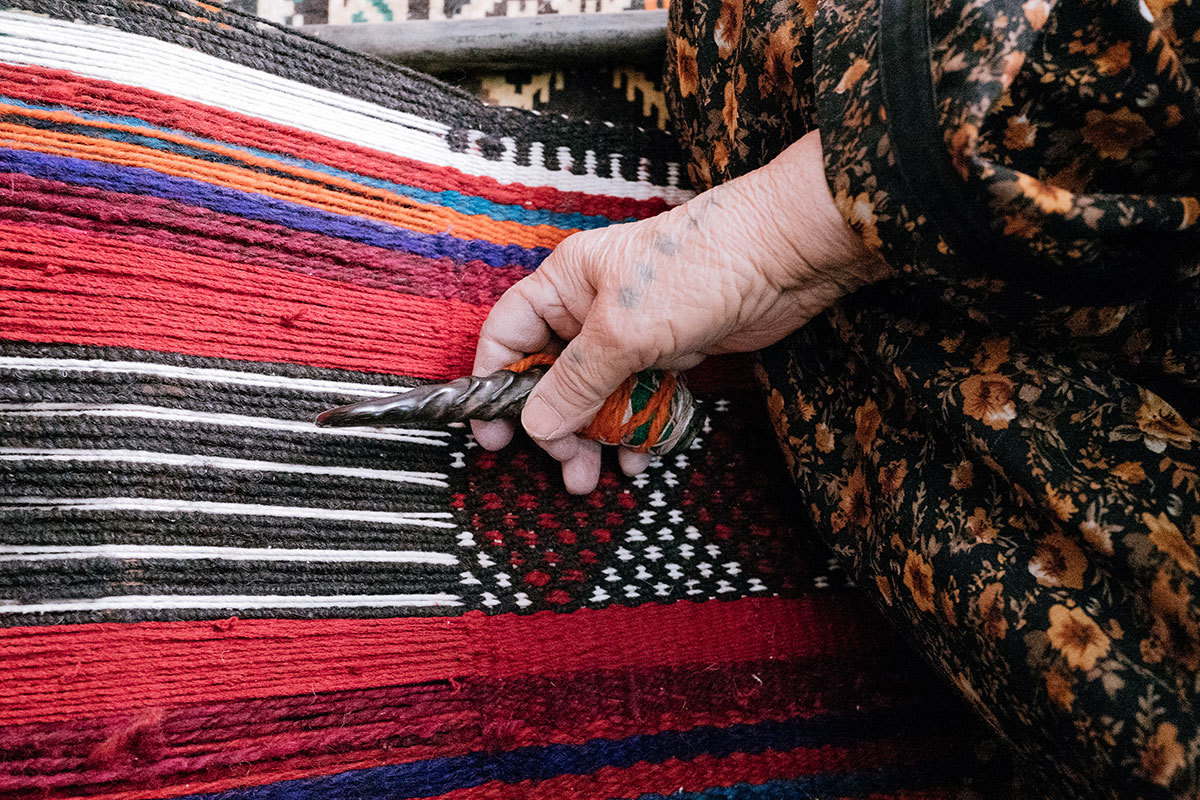 Two frequently occurring symbols in sadu weaving are red diamonds, ‘urjan, and the white spaces in between, called shajarah

‘I also make a loop at the back, to keep everything in place. In case a kid comes to toy with it,’ she laughs. Just seconds later, one of her grandchildren toddles into the threads and falls – Um Fayez barely blinks an eye.

She keeps an impressive collection of rugs, each representing a different trend in sadu weaving. There are tent dividers, stained and worn but elegant in their beige and black minimalism; there are red-black-white shajarah rugs showing sadu in its most recognised form – and long psychedelic neon carpets, made from synthetic wool, indicating a trendy future for the craft, albeit less environmentally friendly.

When asked how she feels when she is weaving, Um Fayez answers: Astanis, ‘I enjoy myself’. Still seated on the floor, in her yogalike squat, she pauses and repeats with emphasis, Astanis!

‘But it’s really hard work,’ Mona adds to her mother’s proclaimed joy. ‘It’s not as easy as it looks. She is really brilliant. And she has all the patterns memorised.’ 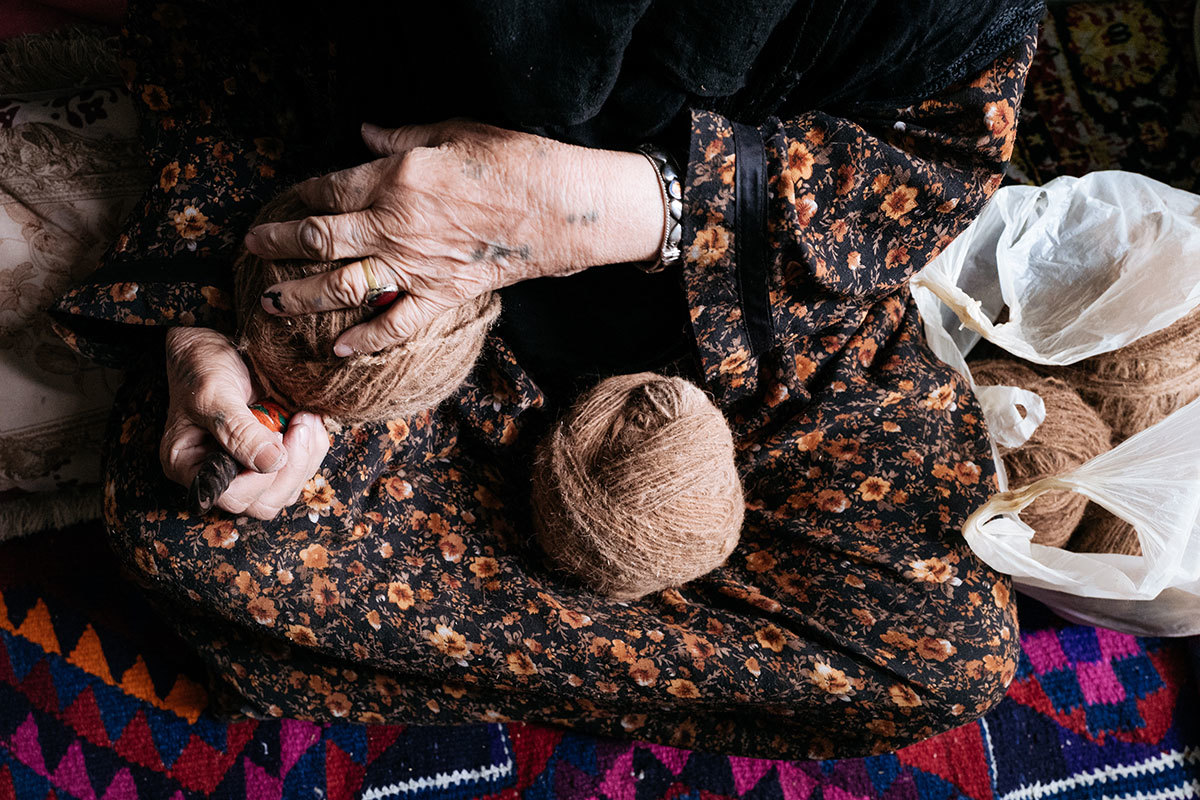 Um Fayez’s favourite type of yarn is camel, which unlike wool retains its natural colour 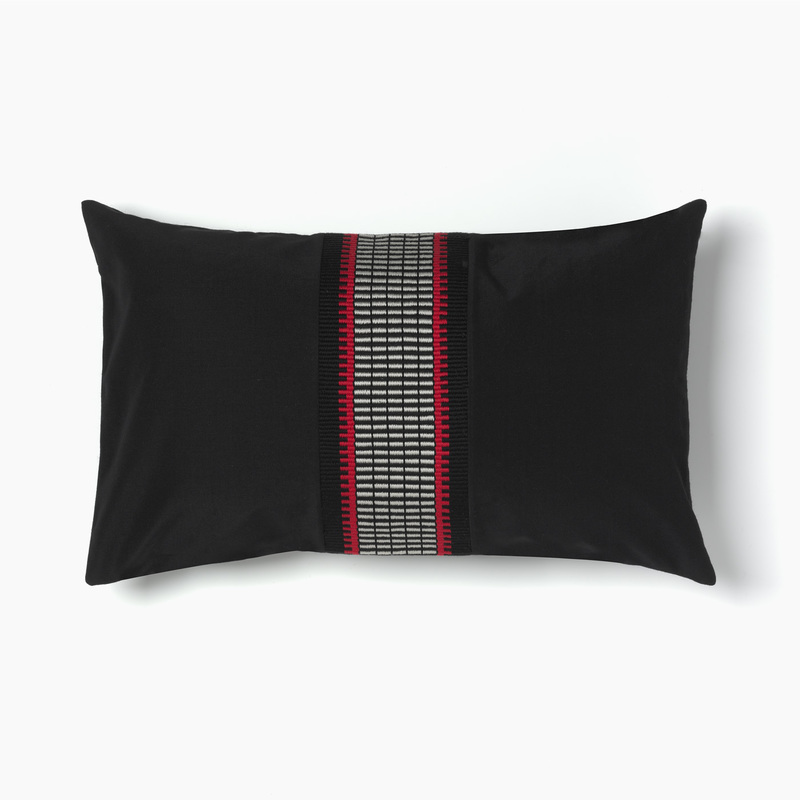