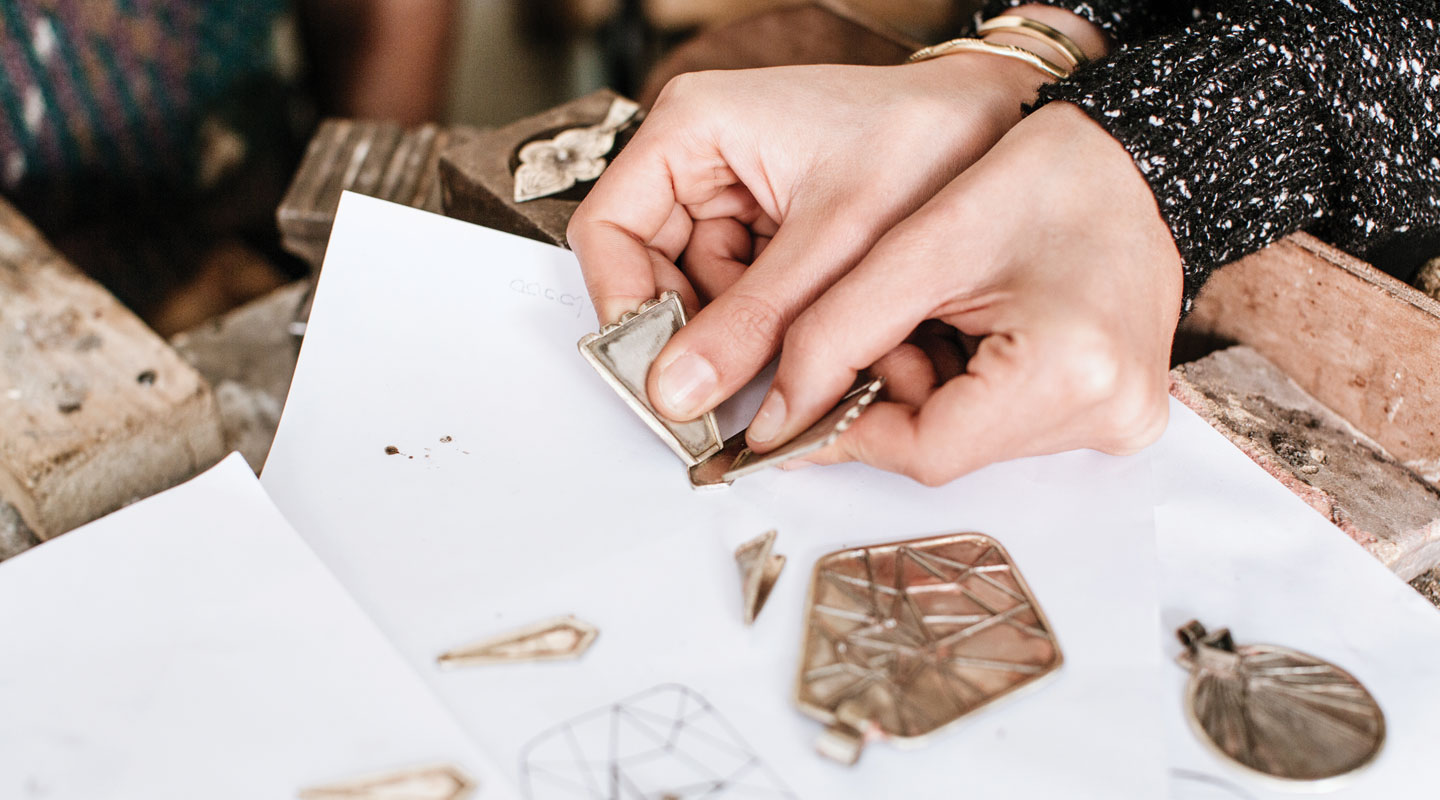 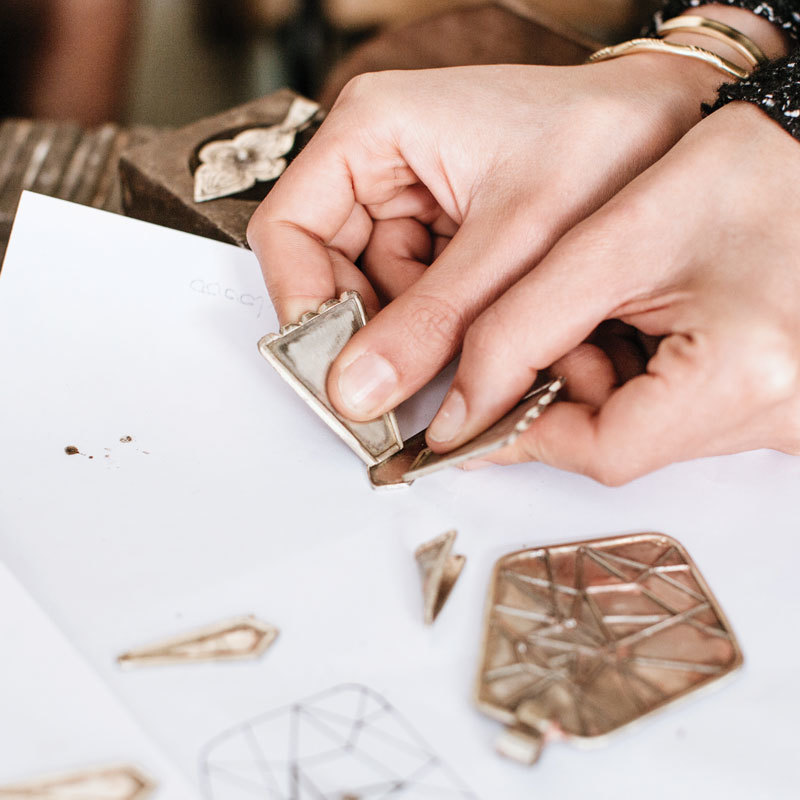 Very superstitious: a designer slows down by trading her Paris office for Morocco's village life.

‘I choose the villages that nobody wants to go to,’ says Sara Ouhaddou, explaining that some Moroccan villages attract more visitors than others. ‘They might be very far away, tricky to navigate, or not the most beautiful on the mountain, so tourists never go there.’

The 29-year old designer began visiting the remote and struggling communities of Ait Souka and the Ourika Valley as part of Mad’in Medin, a collective she founded to preserve and reinterpret Morocco’s traditional craft techniques, from embroidery to tile making. Many of the craftsmen struggle due to economic, geographic or social disadvantages, but Mad’in Medin seeks to fix that.

‘I always adapt to the people I work with,’ Ouhaddou says, explaining how each town has its own routines and superstitions. ‘In Tétouan, no one is allowed to see an embroidery before it’s complete to avoid the “evil eye”. In the Atlas Mountains, the hands of the workers are decorated with henna to ensure success. Also, we start everything we do with the right hand for good luck, as well as spray orange flower water on the weavers for peace.’ 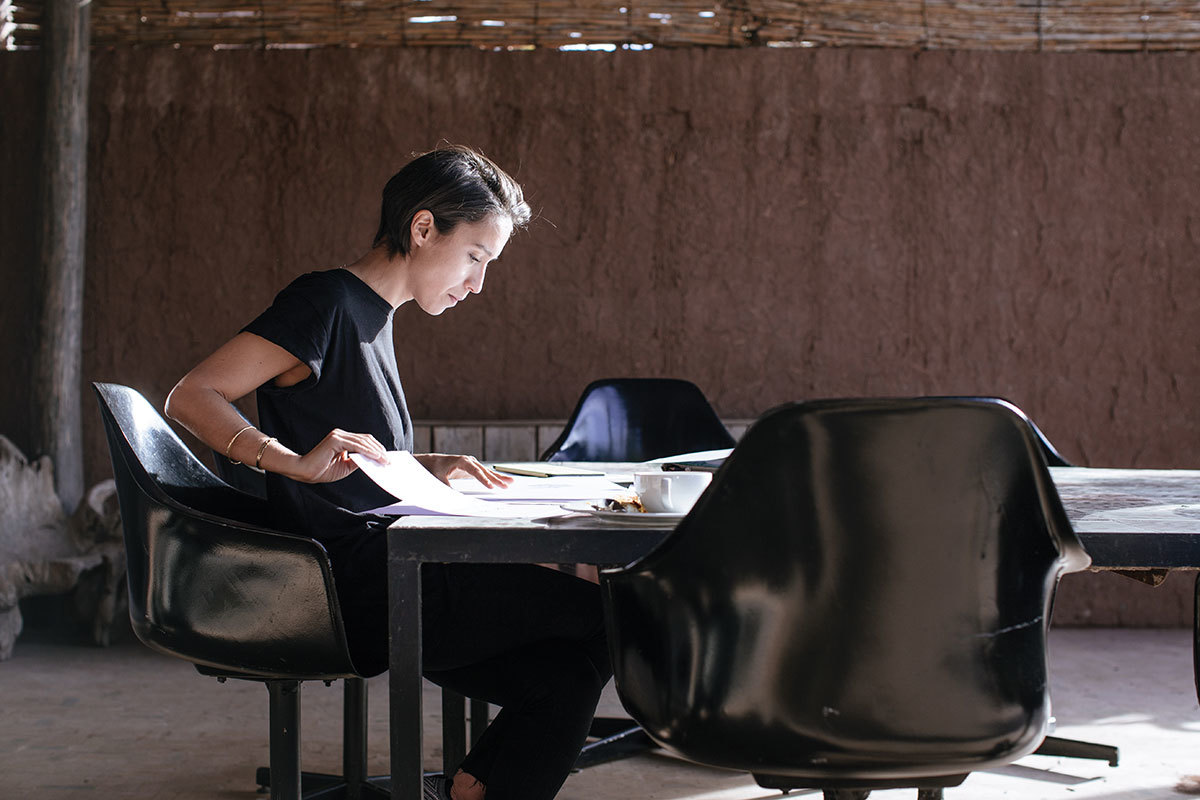 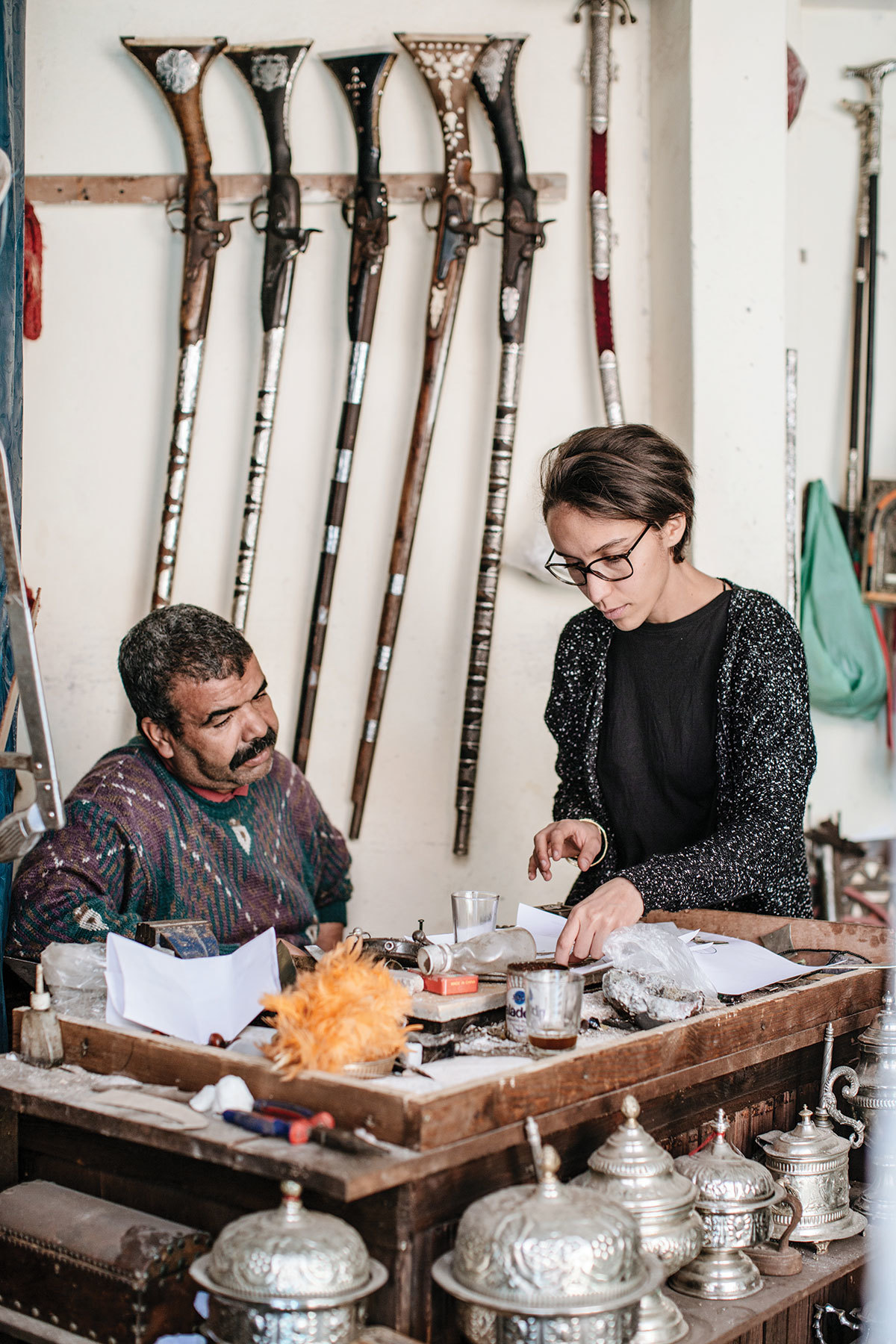 As part of Mad’in Medin, a collective she founded, Sara Ouhaddou works with local craftsmen

Ouhaddou and the craftsmen produce quick-to-sell items, which are later shipped to pop-up shops and markets in Paris. In the Ourika Valley, stools are made from ceramic and recycled rubber, a combination of unexpected beauty that is then polished and sculpted into geometric patterns. Working with women who range from being teens to elders at Trankat, an artists’ residence in Tétouan, Titaween was created – a line of sweaters and t-shirts with paint-like splatters of deep red, gold and black embroidery. The profits from each project are sent back to the villages. ‘The purpose, for me, is to show that you can find richness everywhere in Morocco – it’s a very personal vision, but I think there’s something to be done with this old knowledge,’ Ouhaddou says. 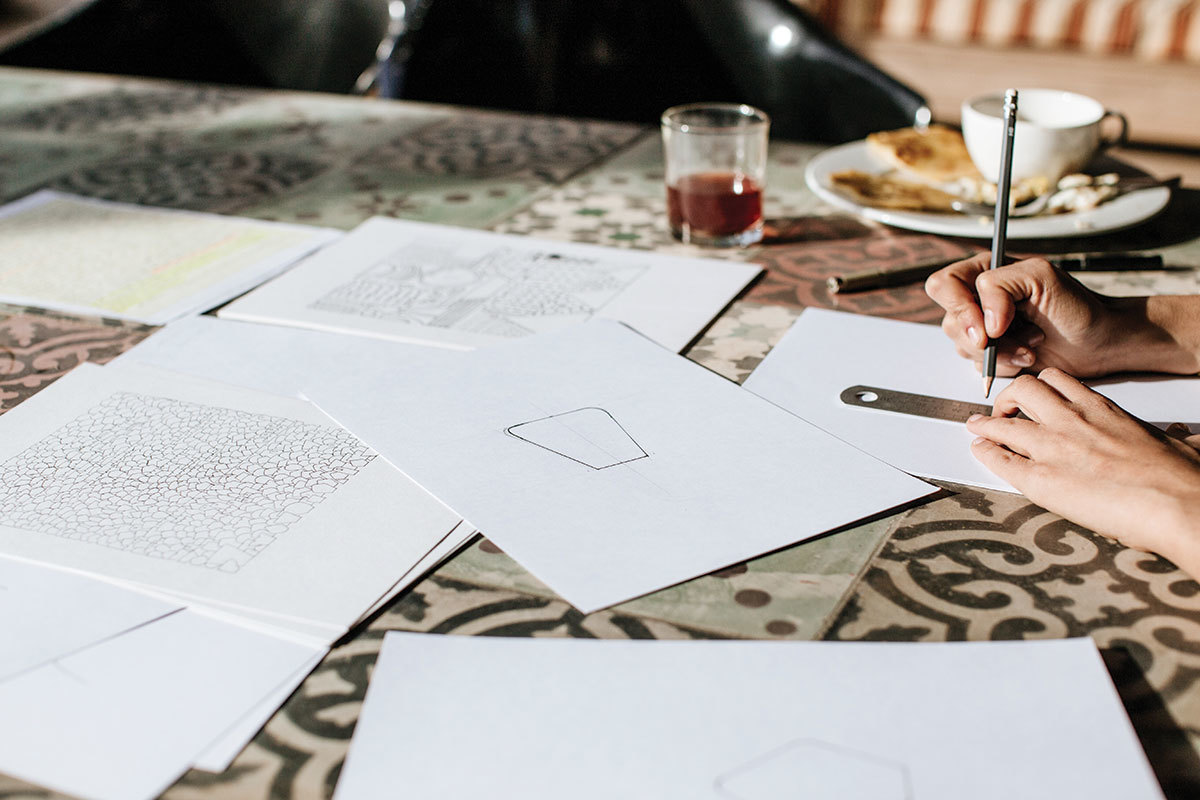 Her jewellery will be exhibited at the upcoming Marrakech Biennale

Born in a small town in southern France to Amazigh parents, Ouhaddou studied art at L’ENSAAMA Olivier de Serres in Paris. The only artist among a family of farmers that immigrated to Paris in the mid-1980s, Ouhaddou’s career path is somewhat unorthodox for second generation Moroccans in France, she says. ‘I’m very thankful to my parents because they gave me a chance to realise that being a business person or doctor is not really how I project the world or see my future.’

At 24, she landed a design job at Lancôme. ‘I learned a lot about what good brand DNA is – how you build a brand and how you can rewrite it,’ she says, reflecting on her last five years with Lancôme. ‘For me, it’s a really good balance. They teach me a lot and when I go back to Morocco, what I’m doing isn’t too far from this philosophy.’ 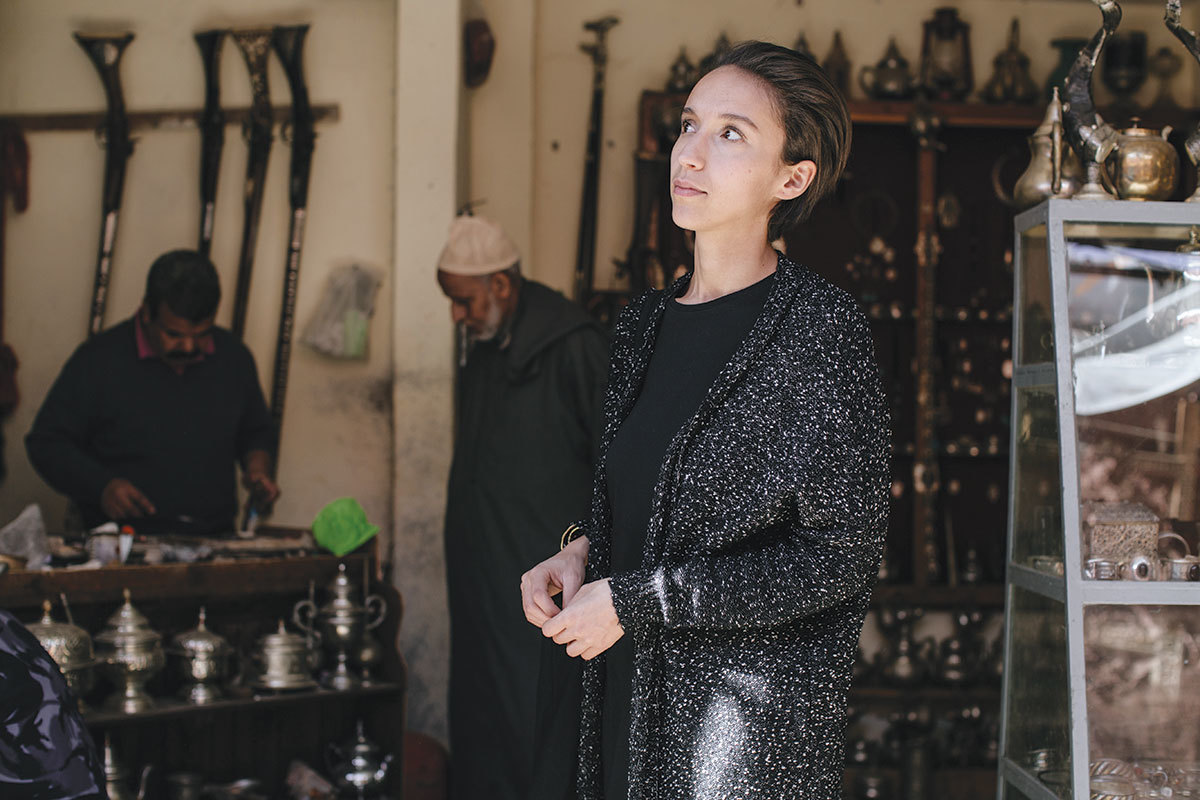 It’s this ‘DNA’ that connects Ouhaddou’s work between the high-flying cosmetic brand and the down-to-earth village workshops as she splits her time between France and Morocco. As well as her work for Mad’in Medin, she is part of the Marrakech artist residency Dar al-Ma’mûn and spends her downtime with her grandmother on their family farm in Meknes, with intermittent tea breaks with relatives.

‘You can really feel the real Moroccan spirit,’ Ouhaddou says, describing Meknes, a northern city known for its almond trees, Roman ruins and narrow stone roads enclaved by crumbling sandcoloured walls. Her parents were raised in Meknes and her extended family, all of whom are farmers, continue to tend the land. 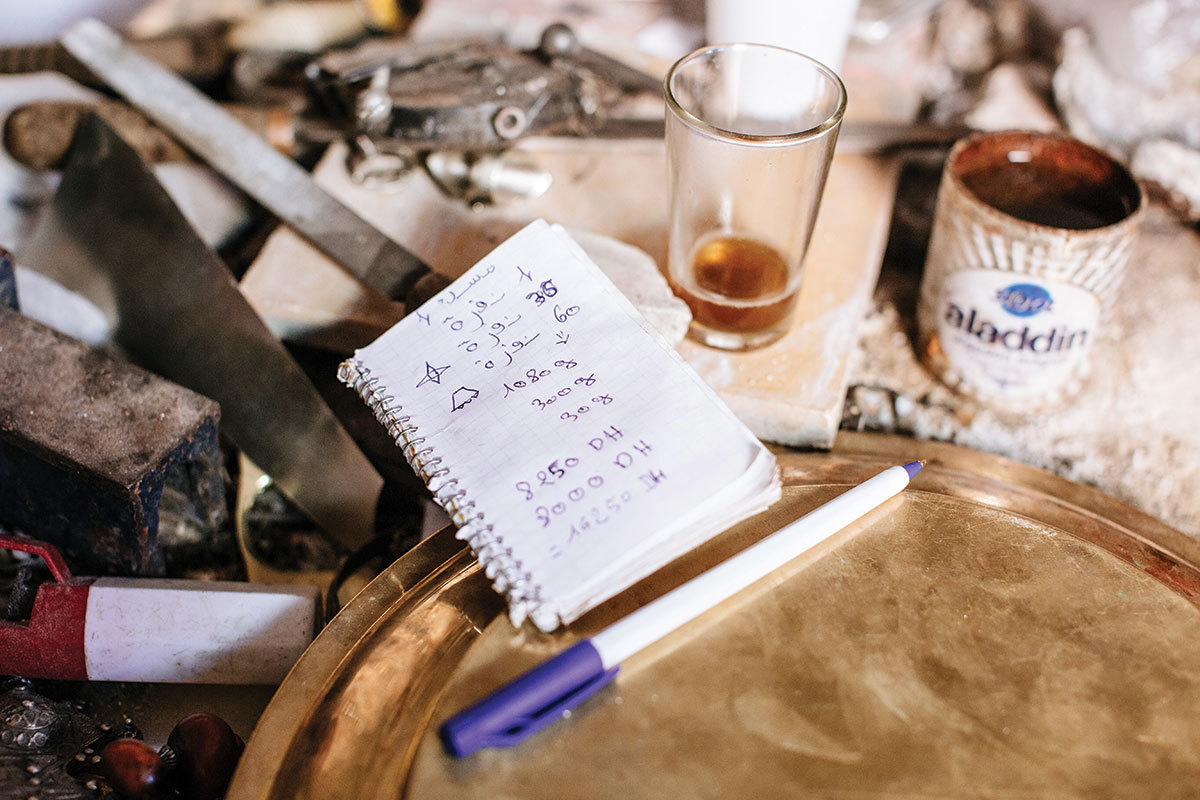 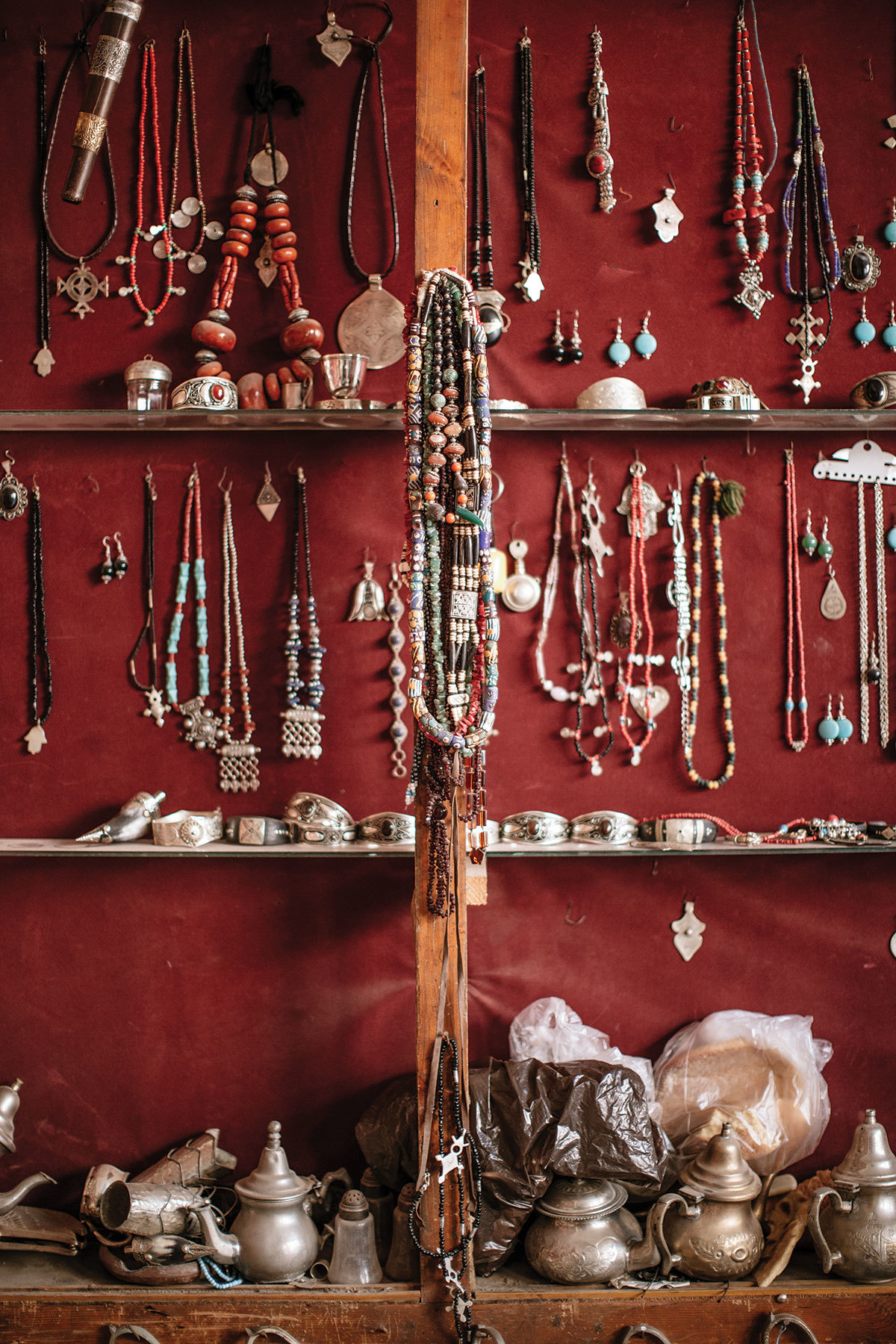 ‘It’s a very traditional life – I make kafta for ceremonies and I go to small shops in the medina,’ Ouhaddou says. ‘It’s a really great way of living. You know everyone – you make your own clothes with the local tailor and your furniture is made by people in the neighbourhood. If you need anything, the carpenter is just around the corner.’ 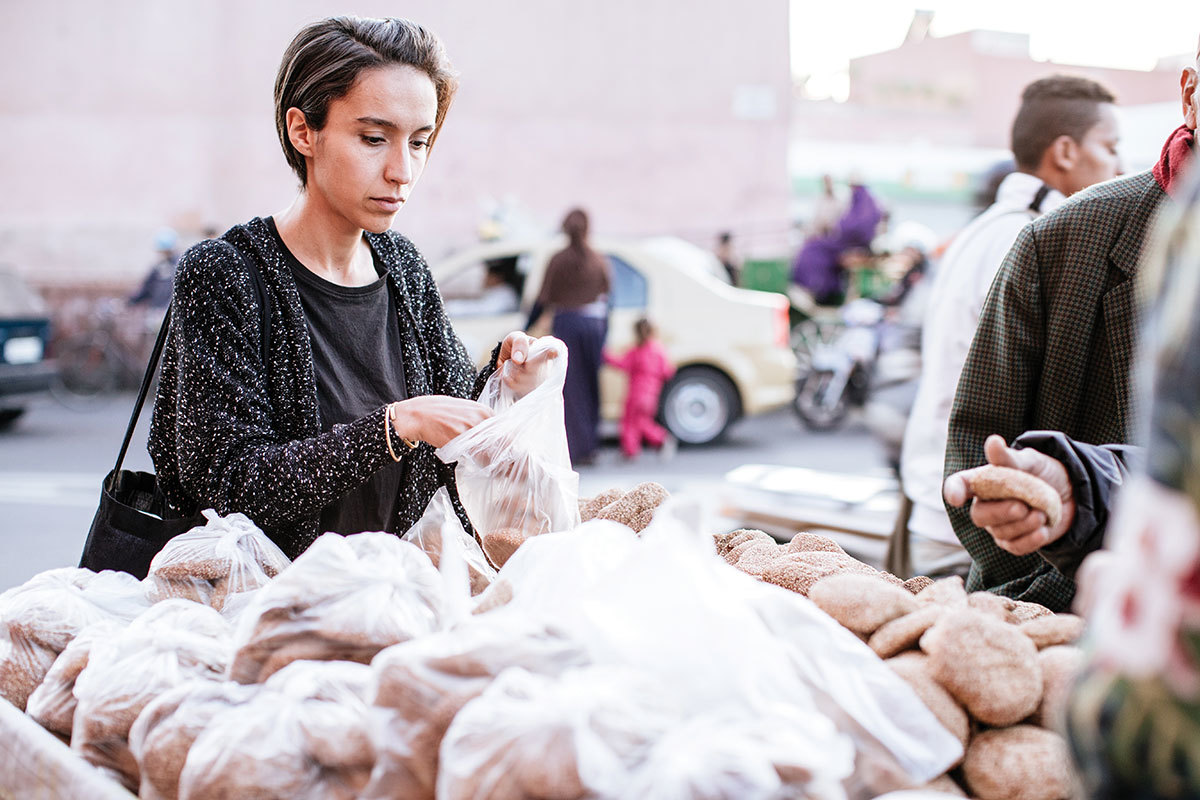 Ouhaddou visits the souk to pick up some bread

During her trips to Morocco, Ouhaddou’s life follows a much slower pace than when in Paris. Her work with Mad’in Medin has allowed her to experiment with different materials and develop a preference for fragile materials, like glass and clay. Islamic geometries, often at the centre of her work, recall the calculated patterns on North African city squares and architectural façades. She insists on producing locally, using site-specific materials and handmade tools that she borrows from the craftsmen. Some of her most recognisable designs are carved and patterned tiles made from the red clay of Ourika, which have been exhibited at Paris Design Week and La Gaîté Lyrique. 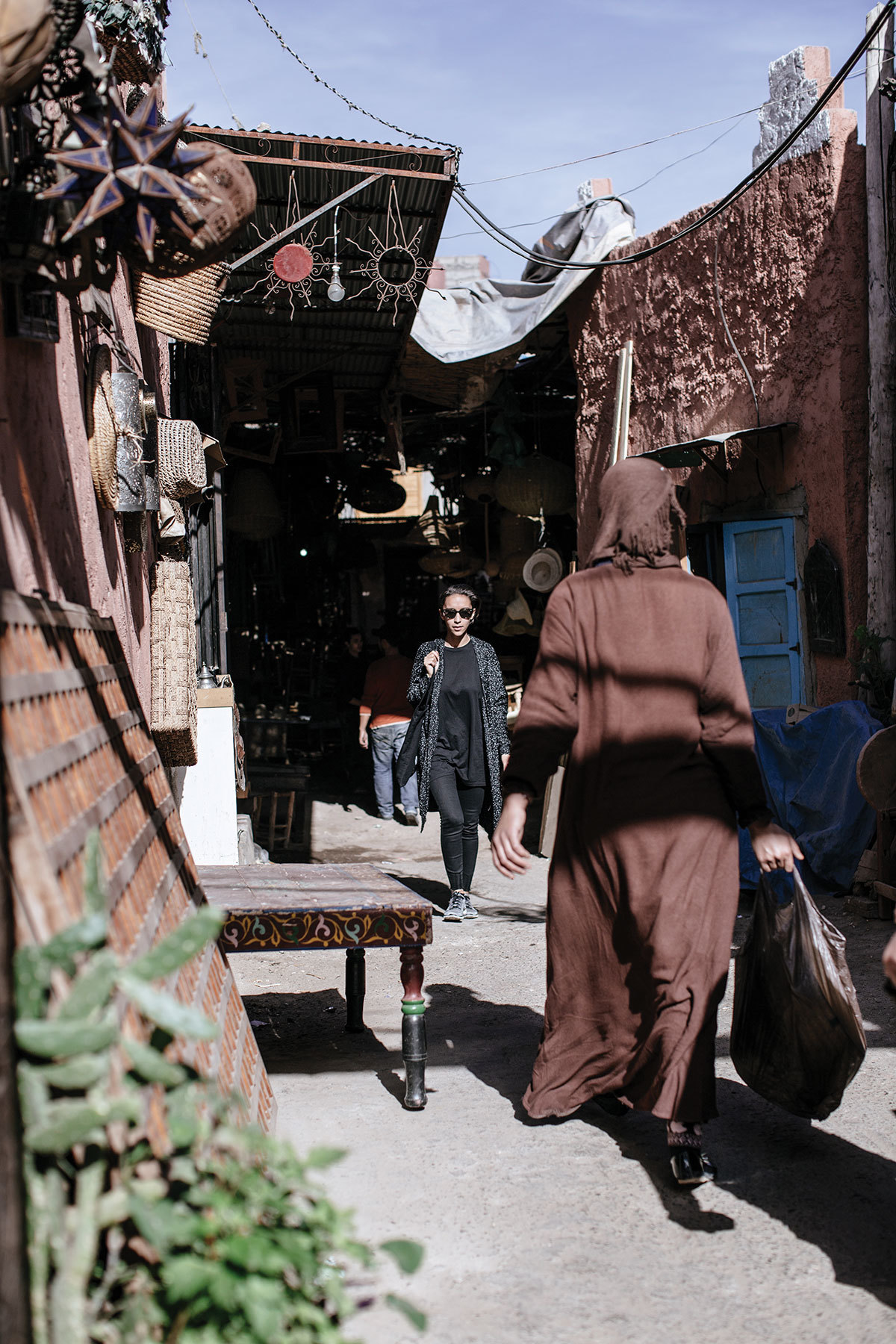 ‘I go to small shops in the medina,’ says Ouhaddou, who enjoys a more traditional life at home 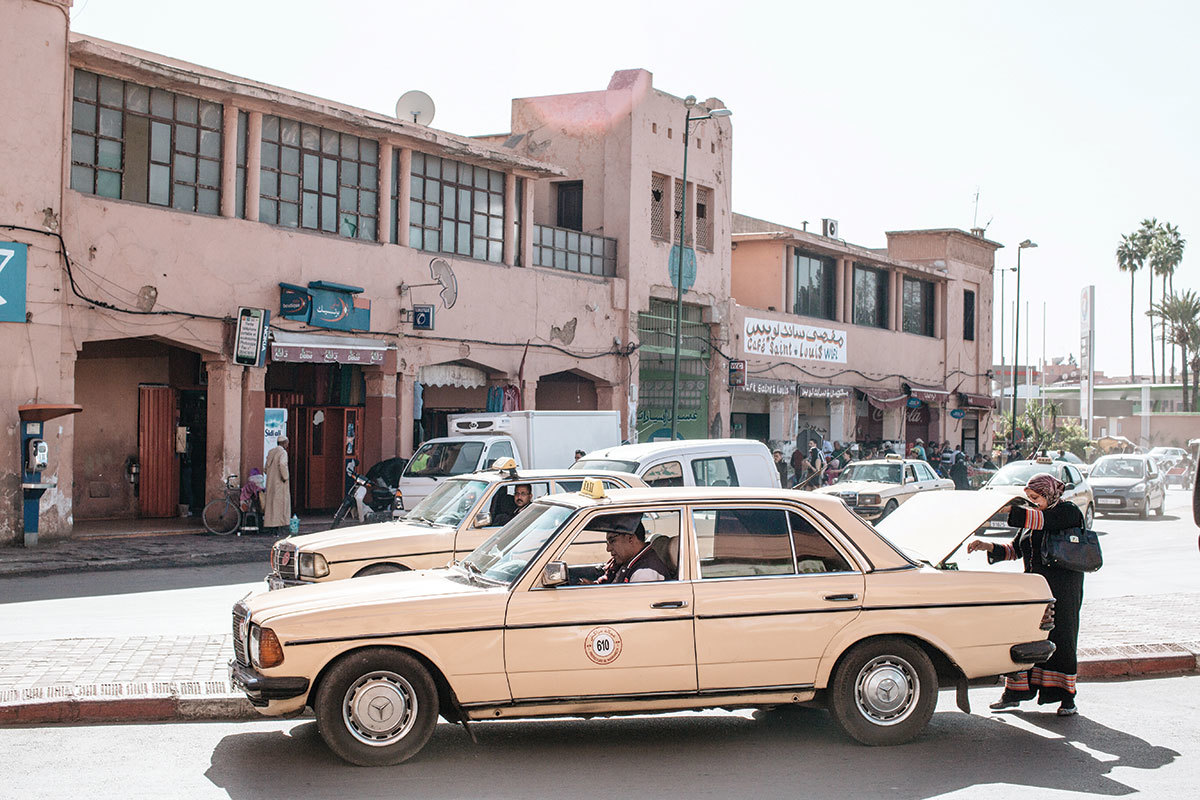 Her multi-city lifestyle undoubtedly adds a special element to her projects. ‘The people working with me feel a difference [in my art], but no one can say it’s an Amazigh difference,’ she says, referring to how people in France react to her work. ‘But even in Morocco I get asked, “Are you sure you’re really Moroccan?” I say, “Yes, we just come from the mountains,”’ she laughs.

At the moment, Ouhaddou has been spending her days at Dar al-Ma’mûn, where she’s working with three generations of craftsmen to make jewellery for ‘Memory Games: Ahmed Bouanani Now’, to be featured in the upcoming Marrakech Biennale. ‘I always try to have multiple generations working together, it’s the best way to have a smooth transmission during production,’ she says of simultaneously working with a grandfather, his son and grandchildren. 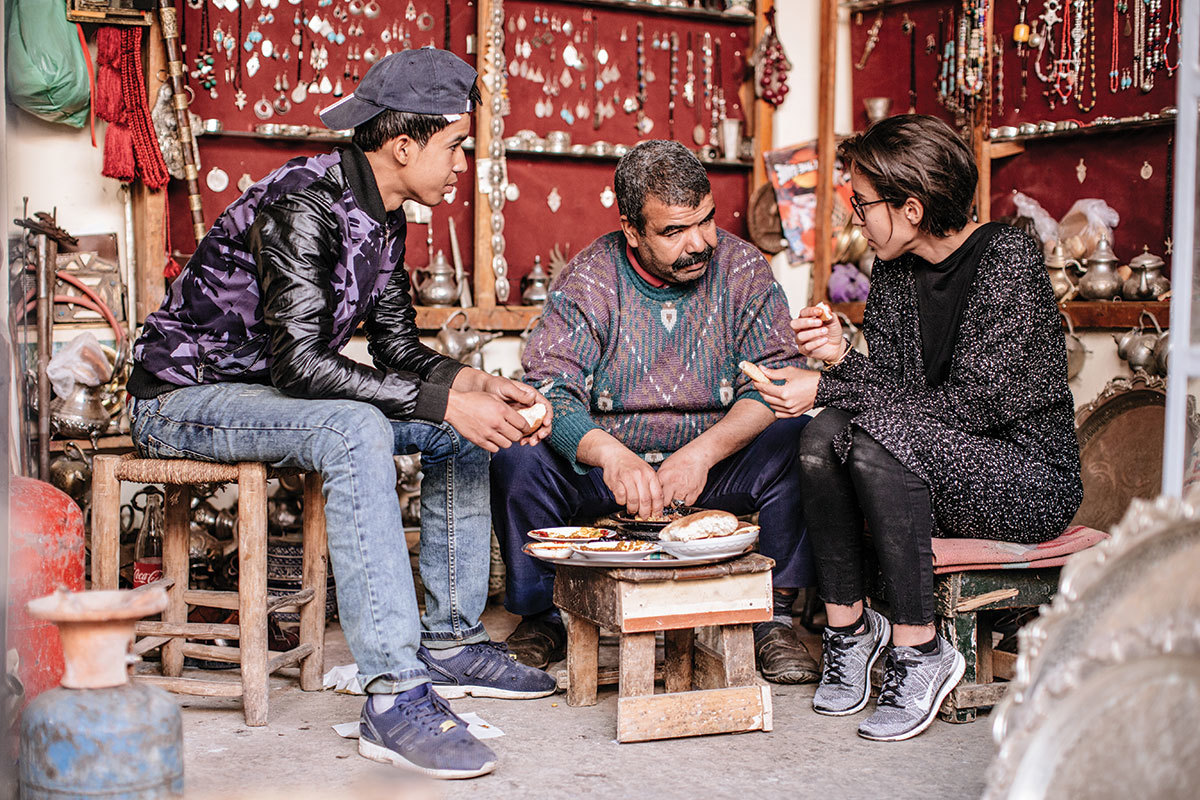 The ma’allem, a jewellery-making specialist, works from his studio space with his sons

Constantly hopping between cities, Ouhaddou lives between her suitcase and next production space. Leading a ‘completely crazy life,’ as she says, the designer rarely plans for more than three months in advance, joking that the ‘future is really close all the time.’ For now, her work in Morocco is her only constant, and Dar al-Ma’mûn is her office space. While she toys with the idea of settling down in the south of France in a couple of years, she quickly bats the idea away. ‘Maybe I will fall in love with Morocco and finally stay there – we’ll see.’