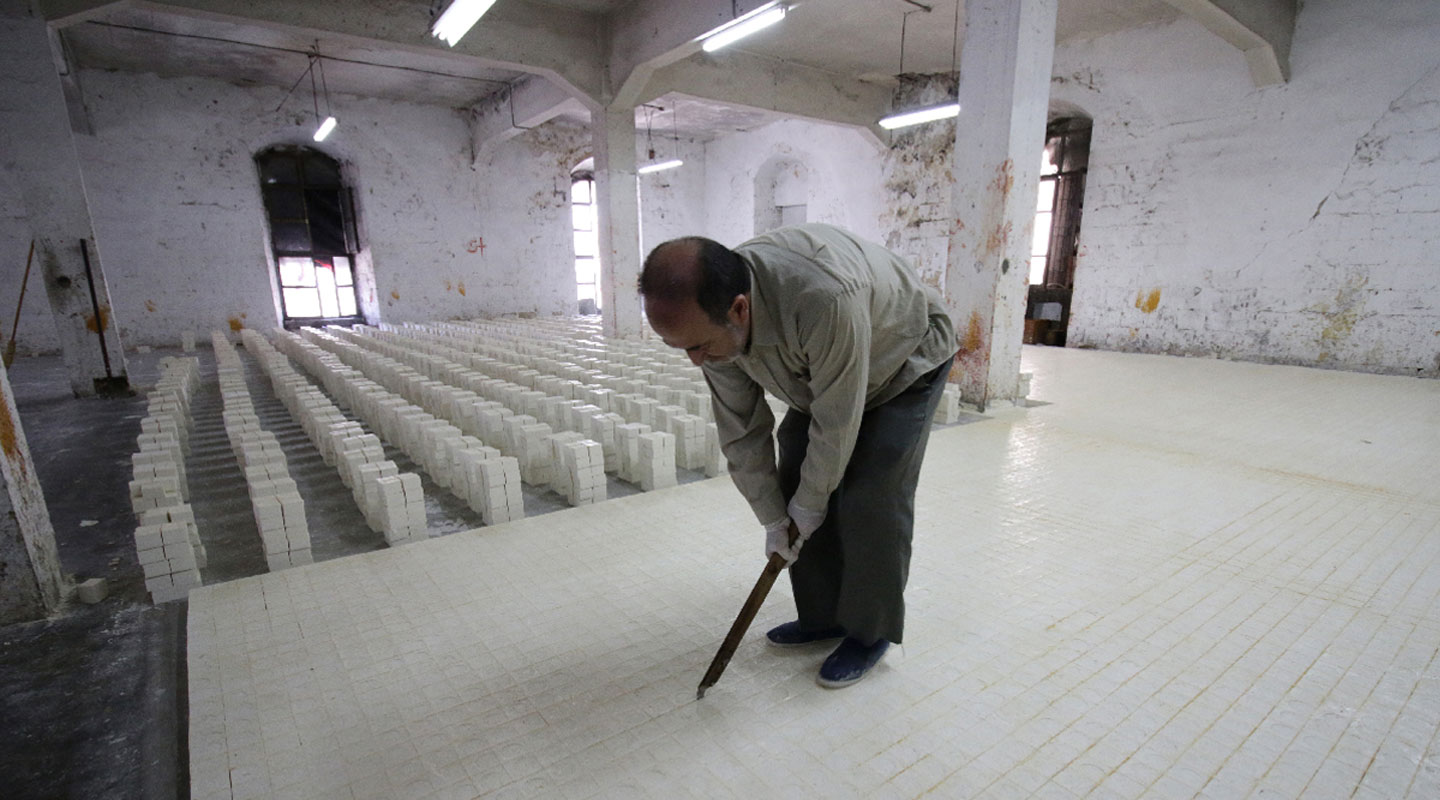 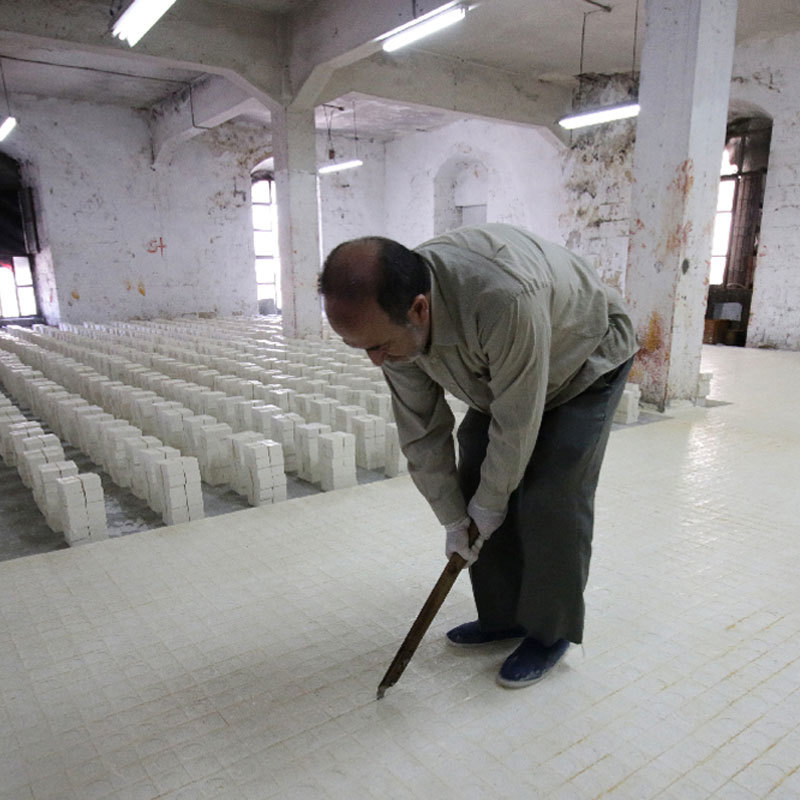 ‘Watch your step – it is a bit slippery!’ warns Rima Al Kilani as she leads the way up the grooved stone steps, not a handrail in sight. At the top of the stairs, it is easy to see why the factory’s surfaces are clouded by a waxy finish: a giant slab of their sole product, olive oil soap, is laid out over a quarter of the floor, waiting to be cut, stamped and packed, as has been done for nearly 150 years. 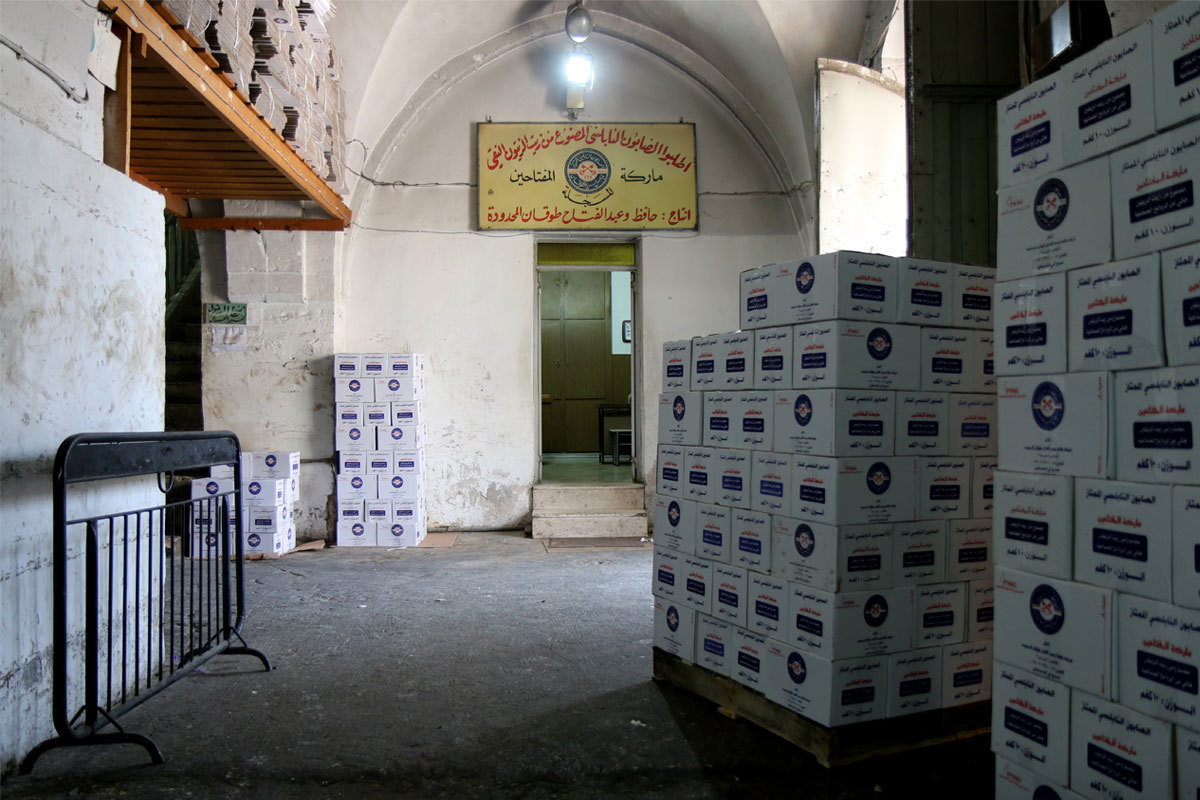 Today, the Tuqan factory produces around 400 tons of soap a year, and ships to customers throughout the Middle East, and more recently, Europe 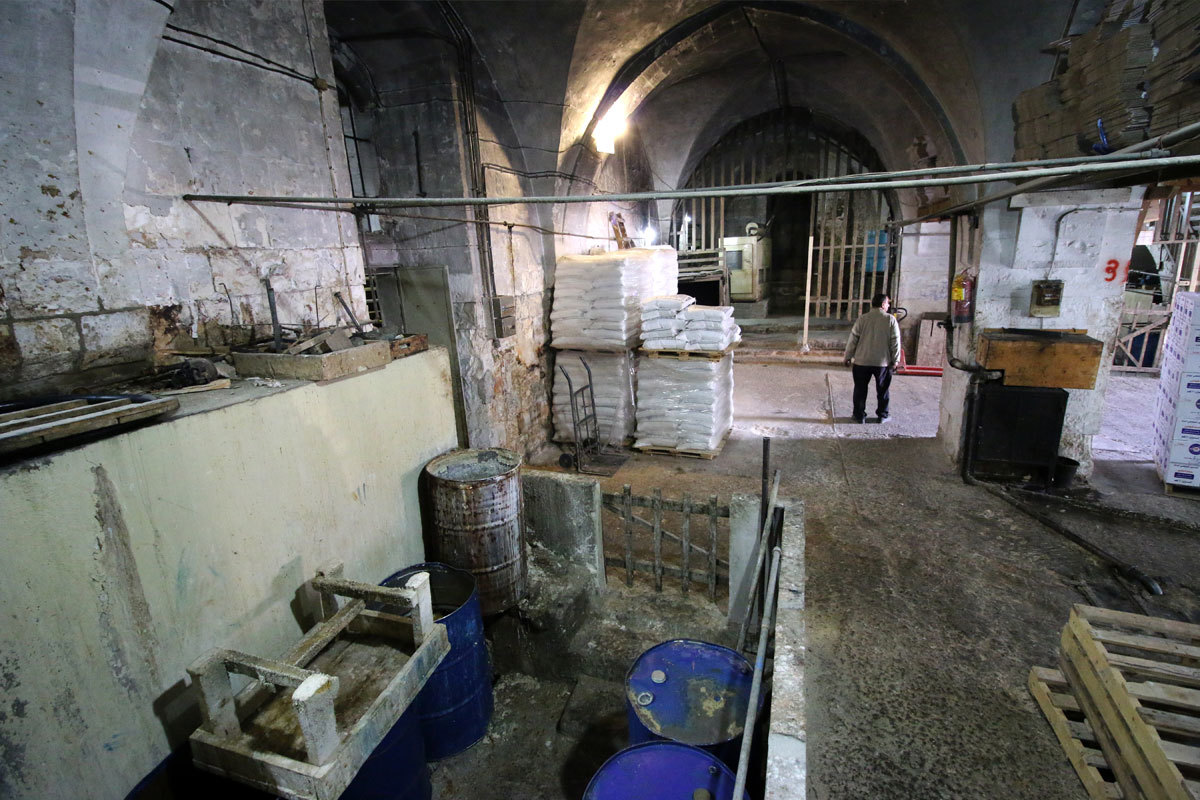 After being cut into bars, rows and rows of Tuqan soap are stacked on the floor, ready to be brought into the drying room on the factory’s top floor 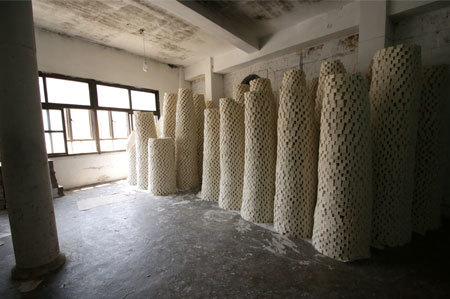 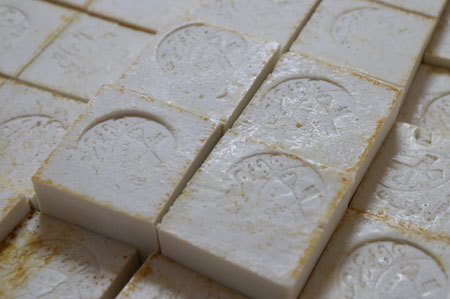 Left: There are no fans at the Tuqan factory – after the soap has been cut into bars, it is stacked

Right: The Tuqan family trademarked the muftahein (two keys) symbol early on, said to symbolise the original eastern and western gates of Nablus' Old City. It is stamped onto every square bar of soap they produce

In their stately stone building, just a few steps away from Nablus’ Old City, the Tuqan family continues a soap-making tradition that dates back, some literary sources say, to the 14th century. Nablus, surrounded by Fields of olive trees and numerous fresh water sources, became famous throughout the Middle East for the quality of its olive oil and, in turn, its olive oil-based soap. By the time Hafez and Abdel Fattah Tuqan established their factory in 1872, Nablus was known as the soap capital of Palestine, and the brothers honed a simple, effective soap recipe still in use today.

‘You can tell from the smell that it is all natural,’ Al Kilani says proudly, gesturing to the air around her head. ‘You don’t smell any chemicals.’ 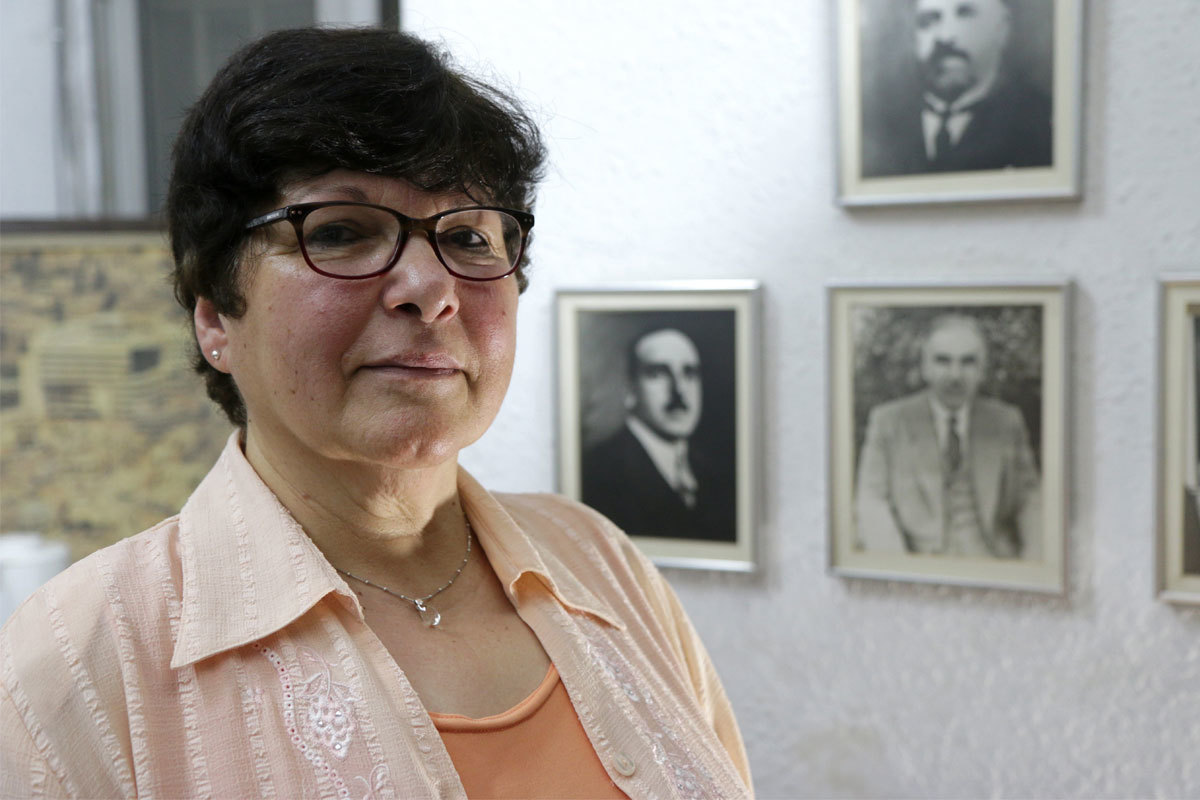 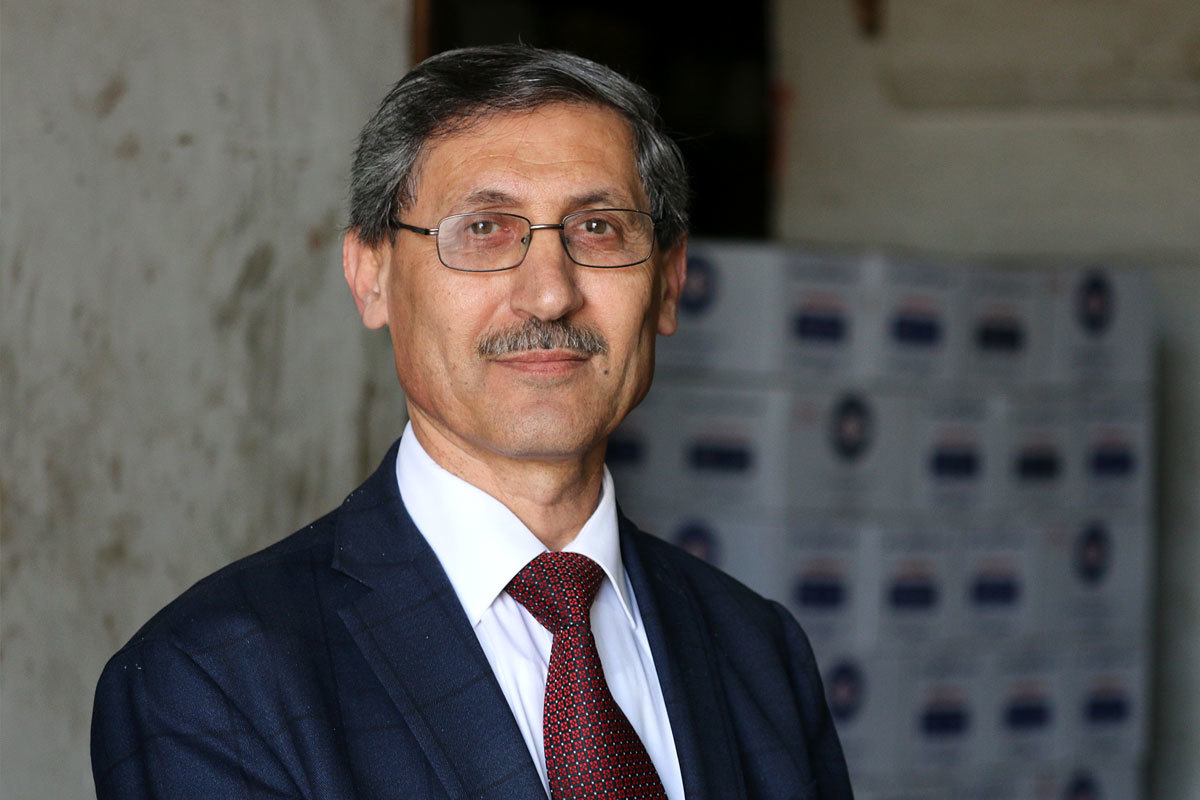 Left: Rima Al Kilani is the granddaughter of Abdel Fattah Tuqan, who established the Tuqan soap factory with his brother Hafez (visible in the top black and white portrait) in 1872. Today, she sits on the factory’s Board of Directors

It is midday at the factory and Al Kilani, affectionately referred to as Madame Rima by the staff, has stopped in to say hello. She is the granddaughter of Abdel Fattah Tuqan, and today serves on the board of directors overseeing the company’s evolving business model for the 21st century.

But while commercial aspects of the soap production business may change, one thing has remained the same, and that is the soap itself.

‘From 1872 until this minute, we’re producing soap according to the traditional way,’ says Nael Al Qubbaj, who has managed the factory’s day-to-day production for 18 years. ‘We are producing natural olive oil soap, not like the commercial soap you Find in the market which is mostly made of animal fats. Because it is made of olive oil, it is better for the skin and for the hair, and it is an excellent detergent.’

Soap production begins on the ground floor of the factory, where the vaulted, double-height ceilings once accommodated camels transporting fresh virgin olive oil from the surrounding villages. Today, the camels have been replaced by trucks, but three original wells under the factory’s ground floor still house casks of oil. 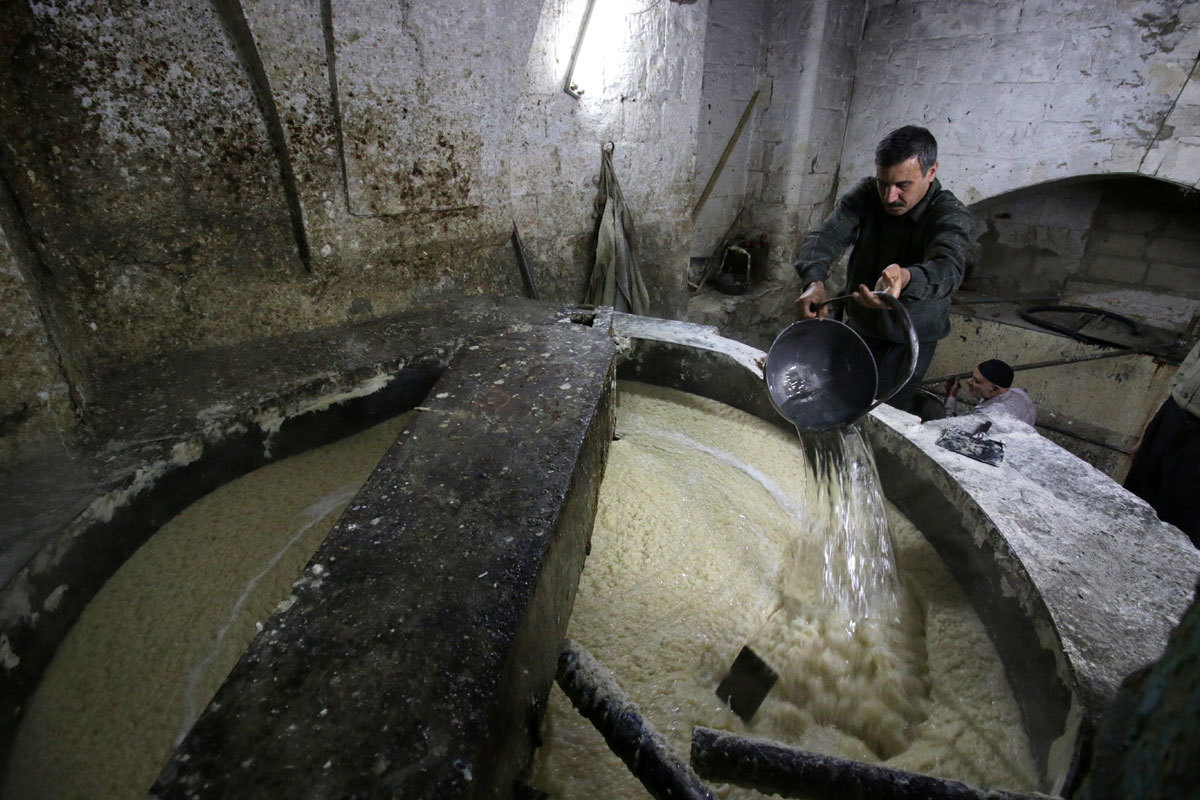 Tuqan soap has only three ingredients: virgin olive oil, caustic soda and water, which are mixed and boiled twice a day, for four days, in a giant vat.
Weighing in at about six tons, one batch will create 35,000 bars of soap

Eighty-two year old Abu Sameer emerges from the back corner of the factory, his tan trousers and button-down shirt splattered with waxy soap. For just over 60 years, he has worked at the Tuqan factory, mixing the three ingredients that go into the soap: olive oil, water and caustic soda, a type of salt. ‘Without me, they wouldn’t know what to do!’ Abu Sameer jokes with Madame Rima, before allowing a glimpse into his daily routine: keeping track of the giant vat of spinning liquid in the back corner of the factory.

‘This is a three-day old mixture,’ Al Qubbaj says, gesturing to the porridge-like batter being whirled by a giant mechanical arm. At six tons, one batch produces about 35,000 bars of soap.

‘They will boil it twice, once in the morning and once in the early afternoon. They keep doing this process for four days and then on the fifth day, the workers carry the mixture upstairs.’

Some half dozen workers haul buckets of the mixture up the slippery steps to the second floor, where it is spread out onto the floor to cool – at nearly two inches thick, the giant slab takes about two days to set in the winter, and three days during the hot Nablus summer. 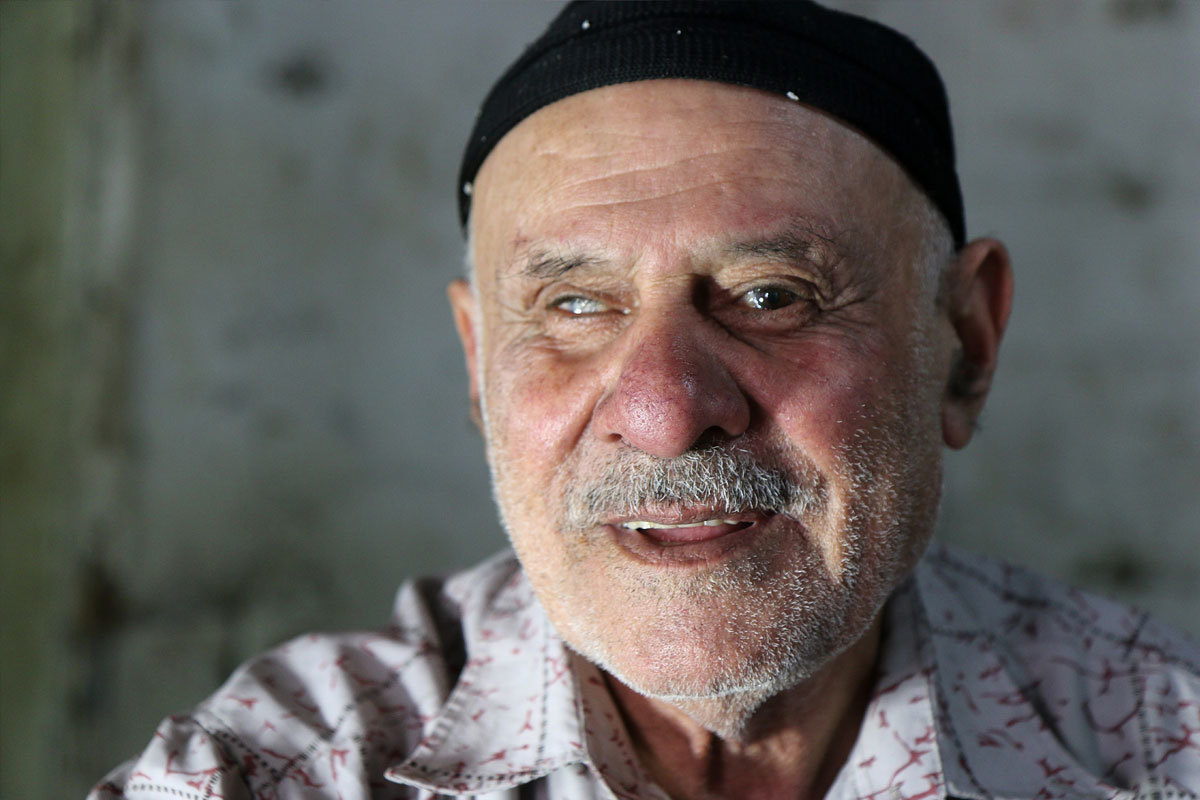 At 82 years old, Abu Sameer is the oldest employee at the Tuqan soap factory.
He has worked for the family for over 60 years, overseeing the early stages of soap production

Fawaz Tammam lightly treads over the giant expanse of soap, which has been gridded with a tan pigment, wearing special plimsoles. He belts what looks like a giant wooden Swiss army knife to his waist, slicing through the lines with precision. Then comes the hammering – also in Tammam’s toolbelt are two blunt hammers, each bearing the muftahein, or ‘two keys’, symbol that signifies authentic Tuqan soap, stamped onto its surface.

‘After cutting it, the soap is put in a tower shape,’ Al Qubbaj says, walking into the back half of the upper floor, where light from the windows is obscured by round, turret-like towers of soap, some topping out at over two metres. ‘In summer, we keep it for 45 days and in winter 60 or 70 days until it is dry.
Then they start wrapping it, and packing it in cartons.’

Hidden behind a row of towers is Motaz, sitting on a pillow and taking squares of starchy paper bearing the muftahein logo in blue and red, wrapping furiously. ‘He can do up to 1,000 an hour!’ says Al Qubbaj. 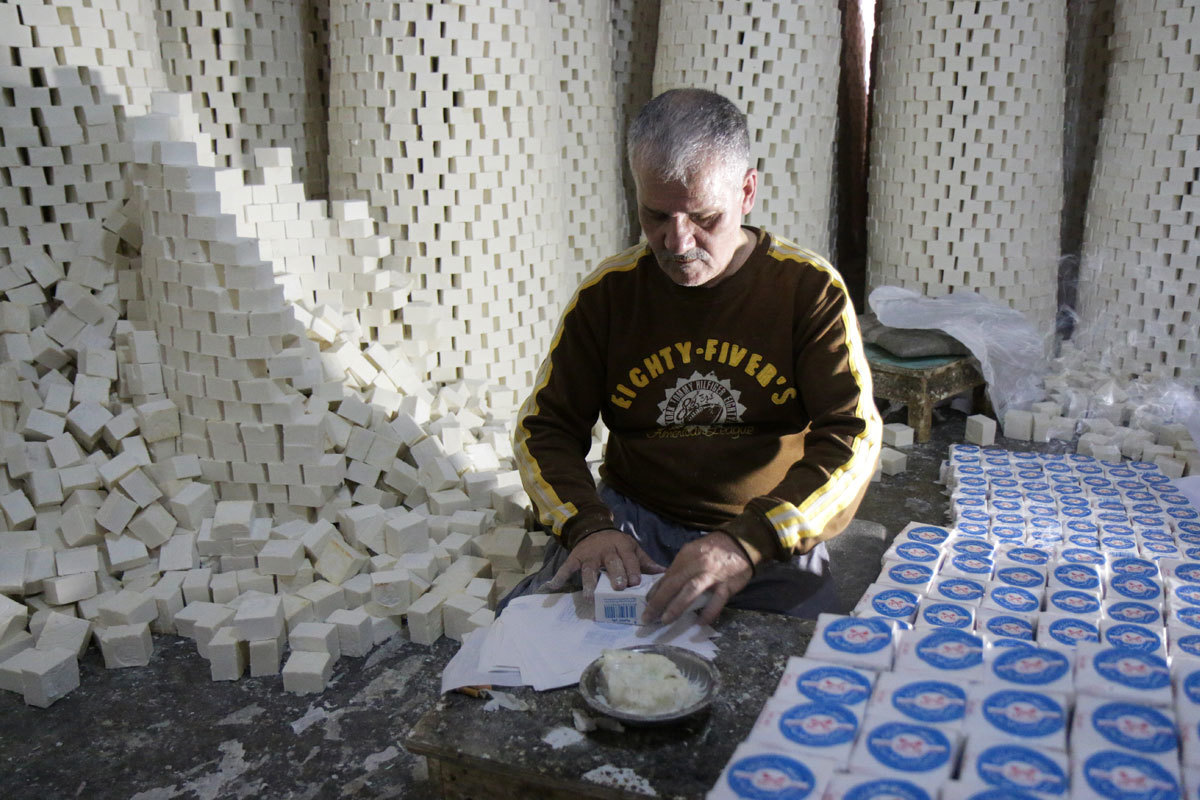 Amidst the towers of soap, one or two workers can be found sitting on pillows, wrapping bars at lightening speed in a special starchy paper, printed with the muftahein logo

At the height of production in the mid-20th century, the Tuqan factory produced about 600 tons of soap a year. Today, because of the ongoing conflict, increased taxes and production restrictions, that number has been cut by about a third. The factory is one of just two soap factories left in Nablus, but Madame Rima doesn’t anticipate shutting down anytime soon.

‘When you talk about preserving your culture or heritage, our production is also a part of this history,’ she says. ‘This doesn’t mean I’m not accepting new and modern things, but I’m really proud of our history, and I’m really proud of this place, that it still exists. It says that our roots are here.’ 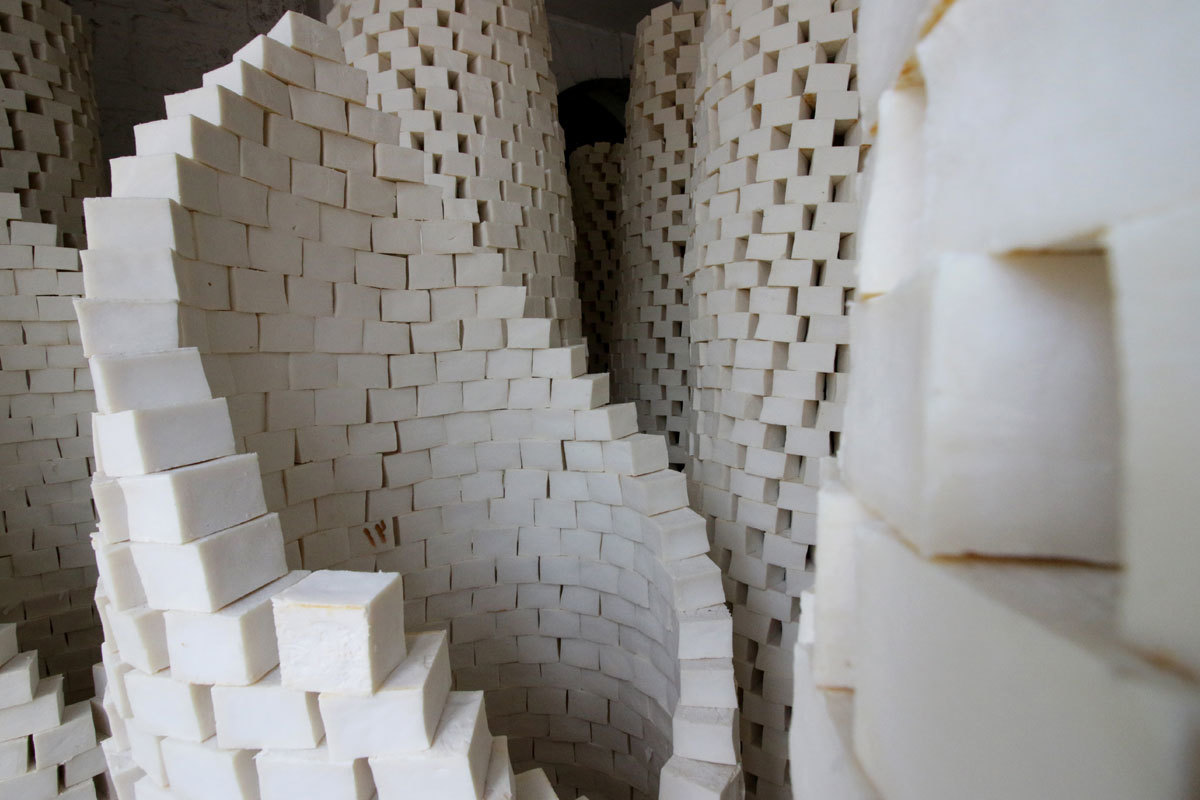 Upwards of fifty stacks of soap can be found drying on the top floor of the Tuqan factory at any given time.
To keep track of the drying process, dates are scrawled onto the soap in a coppery pigment