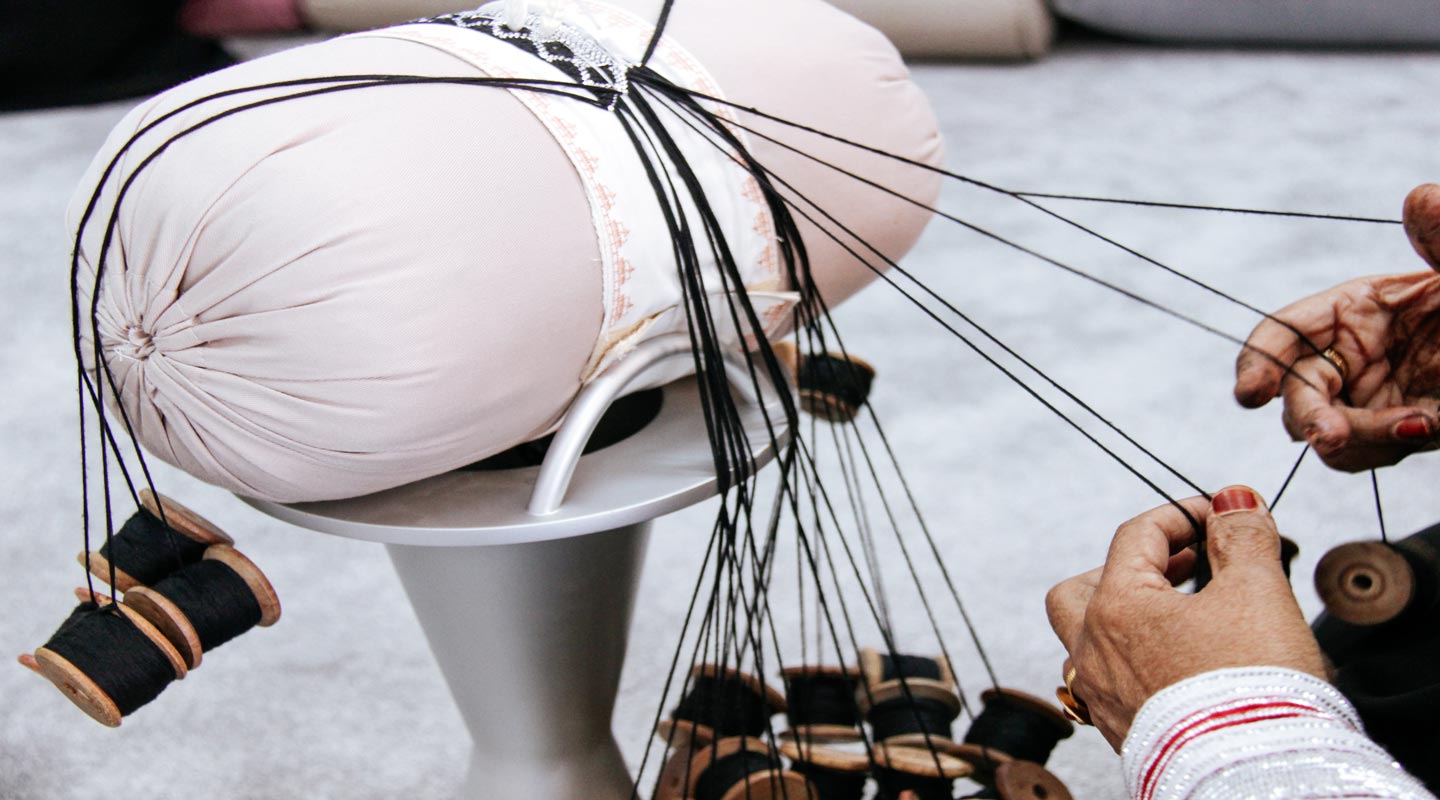 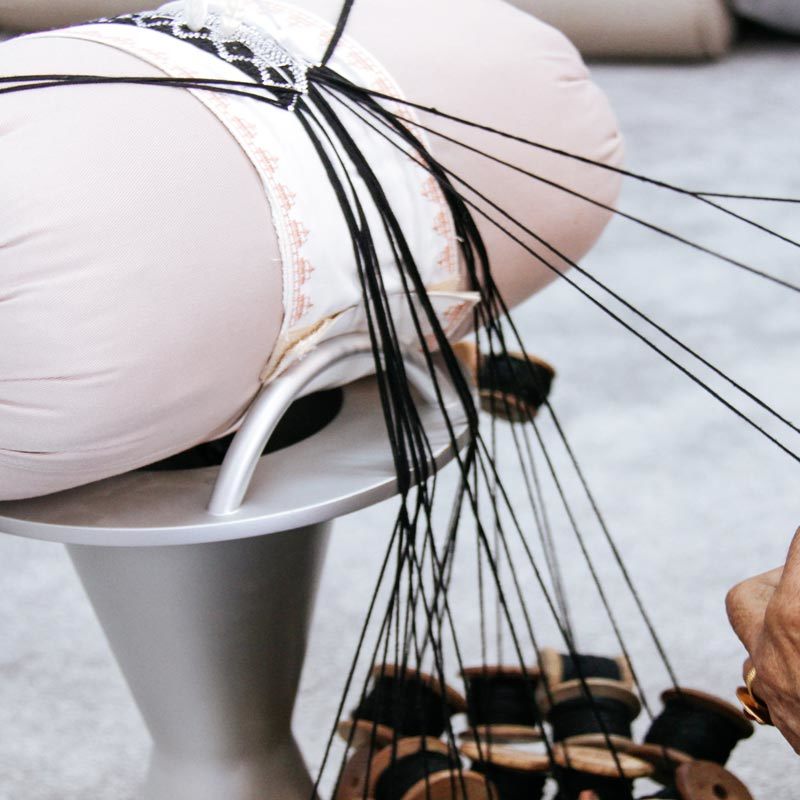 Talli Embroidery in the UAE

In a small crafts centre, just off the eastern coast of the UAE, artisans explore new ways of refining talli, the traditional Emirati embroidery.

Umm Ahmed cannot say for certain how old she is. ‘There weren’t hospitals back then, but maybe I’m 65,’ she guesses, with some degree of confidence.

‘I think you were 65 when I met you,’ says a friend seated next to her, prompting a playful chuckling among the women gathered at Bidwa, a crafts centre in the quaint Emirati coastal town Dibba Al Hisn. For the craftspeople here, age, it seems, is irrelevant.

Fatima Ahmed Mahmoud, or Umm Ahmed as she’s affectionately known, sits on the floor alongside 12 other women, spanning two or three generations. In front of her on the floor is a kajooja, a cylindrical metal holder with a bolster-style cushion on top.

With deft fingers, she weaves with bobbins of threads – intuitive movements: two to the left, then two to the right. A silver coloured thread runs through the entire braid, creating elaborate woven zigzag patterns. It appears effortless as her practiced, henna-stained, fingers navigate the thread paths. Only the 30 something spools that fall to the side reveal the true complexity of the intertwined braid. 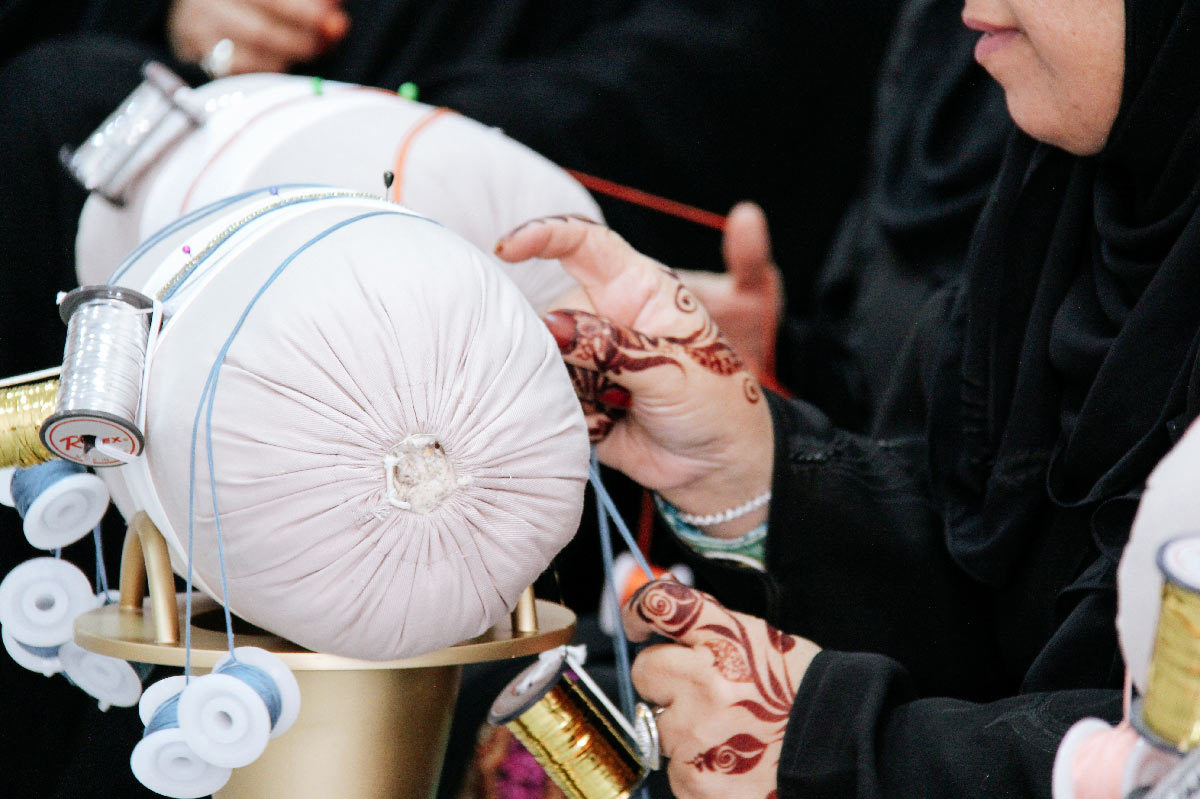 The signature silver talli in the making; less traditional colours like gold are increasingly making their way into modern talli patterns

Umm Ahmed is creating talli, a traditional form of embroidery native to the United Arab Emirates, Oman and neighbouring areas. The craft goes so far back that no one in the room can identity its roots, except that it was first made by the Bedouins, as a way to adorn the cuffs and fringes of their clothes.

‘I started learning this at the age of nine,’ Umm Ahmed says. ‘If I made any mistake, my mother would hit my hands to correct me.’

In the past, she explains, talli weavers used real silver to make the embellishments. More recently, the precious metal has been replaced by a synthetic metallic thread called khosa.

The Bidwa centre has an unmistakably progressive touch to it. Cushions have contemporary tones of grey, rose and pale blue, creating a sophisticated, even chic, setting. Bobbins with differently coloured threads hang in neat rows on the walls, adding to the minimalist character.

Sally Denton, head of programmes and projects at the Irthi Contemporary Crafts Council, which oversees the year-old Bidwa initiative, says that modern design is helping to create a market that can ensure a future for talli.

‘Often a craft dies out because it doesn’t have a context in the modern world,’ she says. ‘It’s not enough to preserve the craft, we want to make it a living entity again.’ 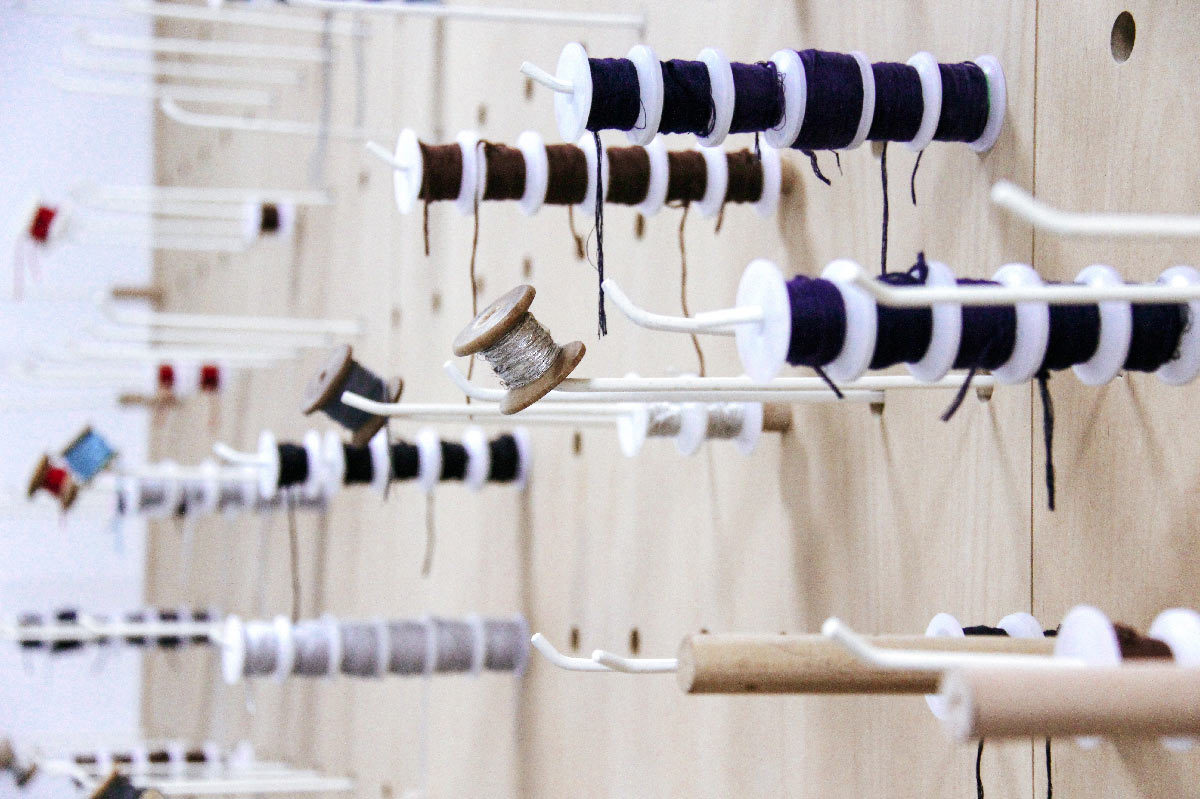 Spools of thread hanging on a wall at the Bidwa centre 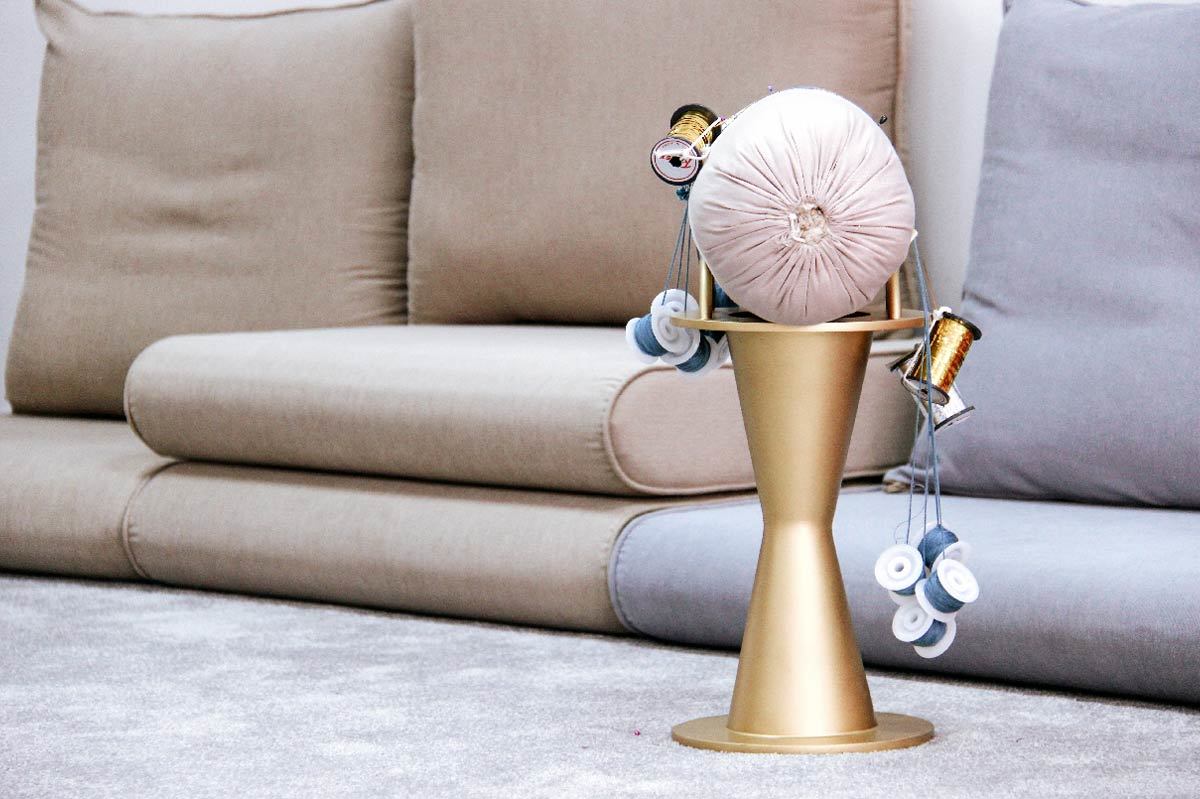 Custom made weaving tools, like kajoojas, were produced for Bidwa

Irthi has already collaborated with London-based handbag maker Asprey to incorporate talli into six limited edition designer bags – thick, hand-embroidered straps made a powerful contrast against glossy crocodile and lizard skins. All of the bags were sold in London at prices ranging from 15,000 to 180,000 dirhams.

For the artisans, this was the first time they incorporated surprisingly complex seam allowances into their embroidery. Denton says it took three months for 23 embroiderers to produce roughly 100 metres of talli.

‘Because it takes so long to produce, you really can only elevate it to the highest level. That’s why we took it to the designer level,’ she says.

Currently, the artisans in Dibba al Hisn are planning for a range of contemporary fashion accessories, like cuffs, belts and earrings, also to sell in London. The international partnerships are bringing both new ideas and attention to the Bedouin craft.

‘What was really interesting for me when we did the bags was to see Emiratis revisiting their own heritage and seeing it in a different context,’ says Denton.

In one corner of the room, two headless mannequins display dresses that were developed for a fashion partnership in Rome. One features two thick talli-embroidered straps only modestly covering the model’s décolletage. Among those wearing the traditional niqab or burka too, there’s an interest in fusing the traditional with modern design. 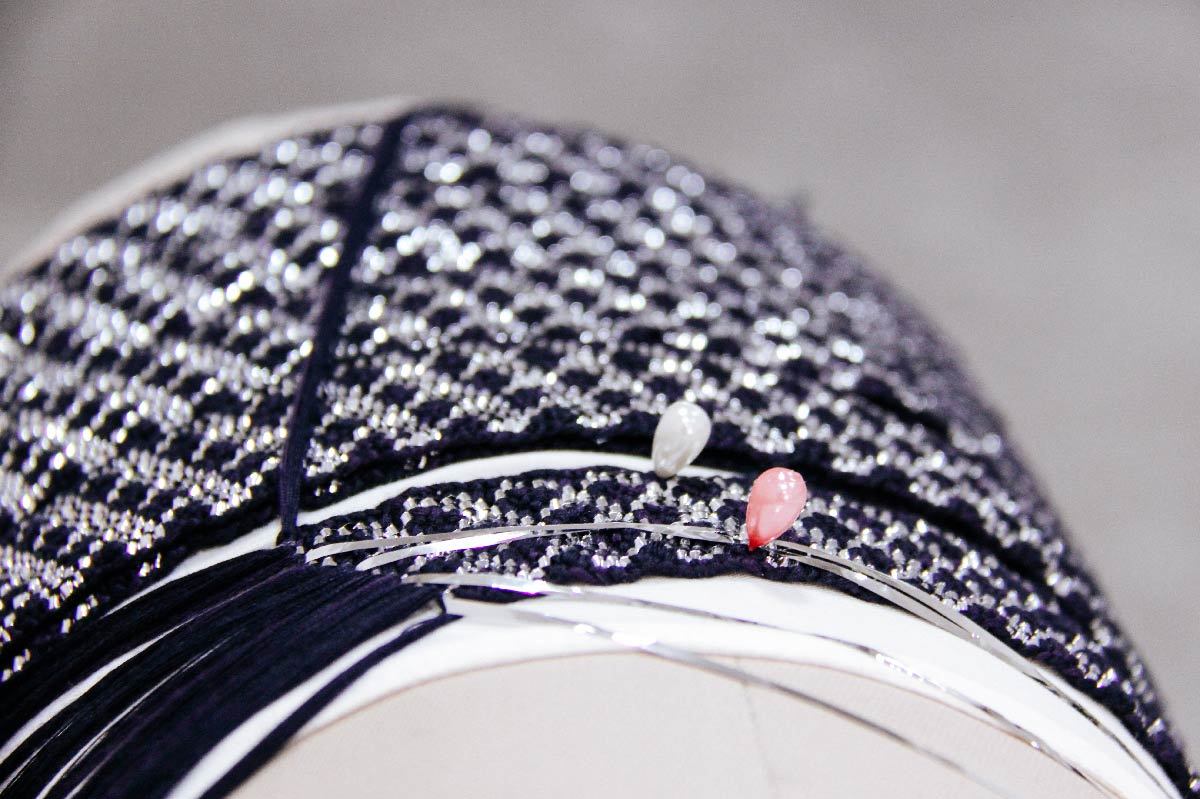 In earlier times, talli was made with real silver. Today, a synthetic material is used 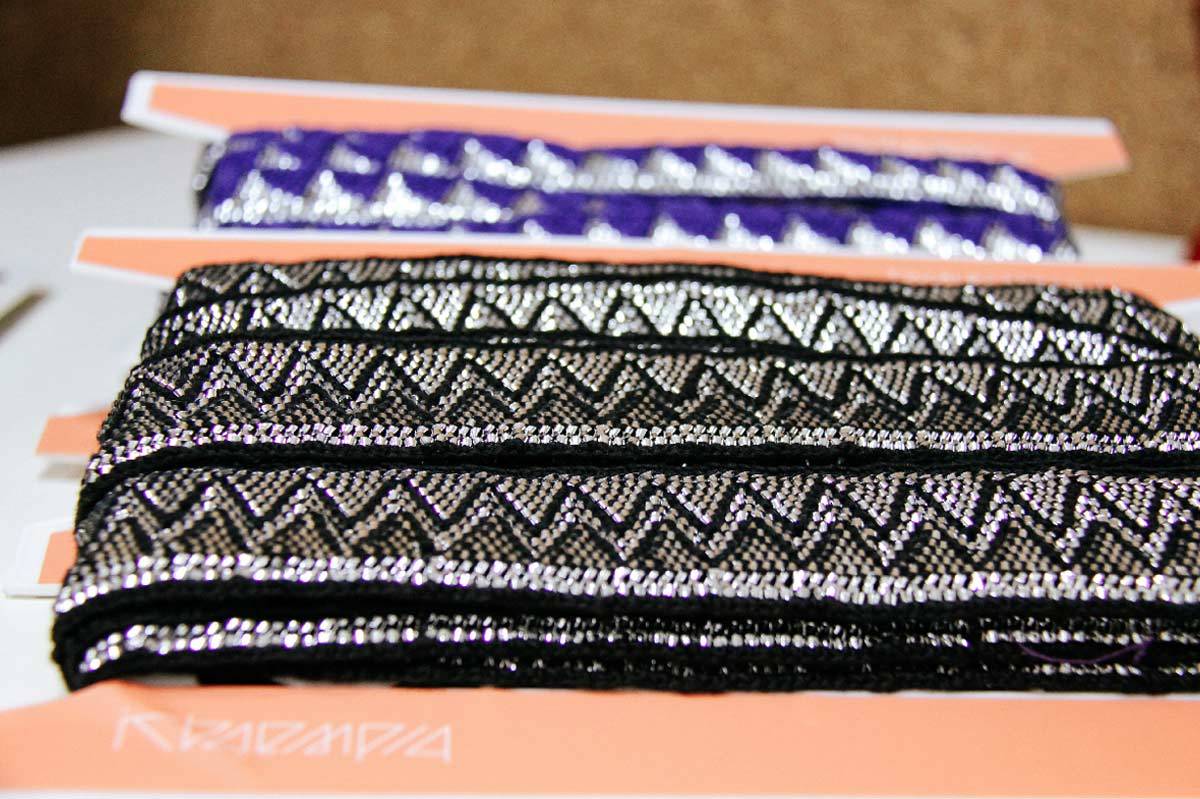 Talli weaving is a Bedouin craft, still widely practiced in parts of the UAE

‘I don’t want to be an old lady and sit at home,’ Aisha Suliman Mohammed, one of the artisans, states plainly.

Aisha has been making talli for 15 years, after learning it from her brother-in-law’s wife when moving to Dibba Al Hisn for marriage. She says the daily work at the centre makes her feel important.

‘In the past, women could not go outside to work. But all my daughters and sons are married and have their own lives,’ she says. ‘Now I have something to do and they are so happy and proud about it.’

The empowerment of women is fundamentally the raison d'être of Irthi. Denton says they have enabled 36 of their total 37 participants to engage in professional employed work for the first time.

Bidwa’s senior artisan, Umm Ahmed – the grandmother of 27 boys and girls – is getting recognition for her skillful mastery’ 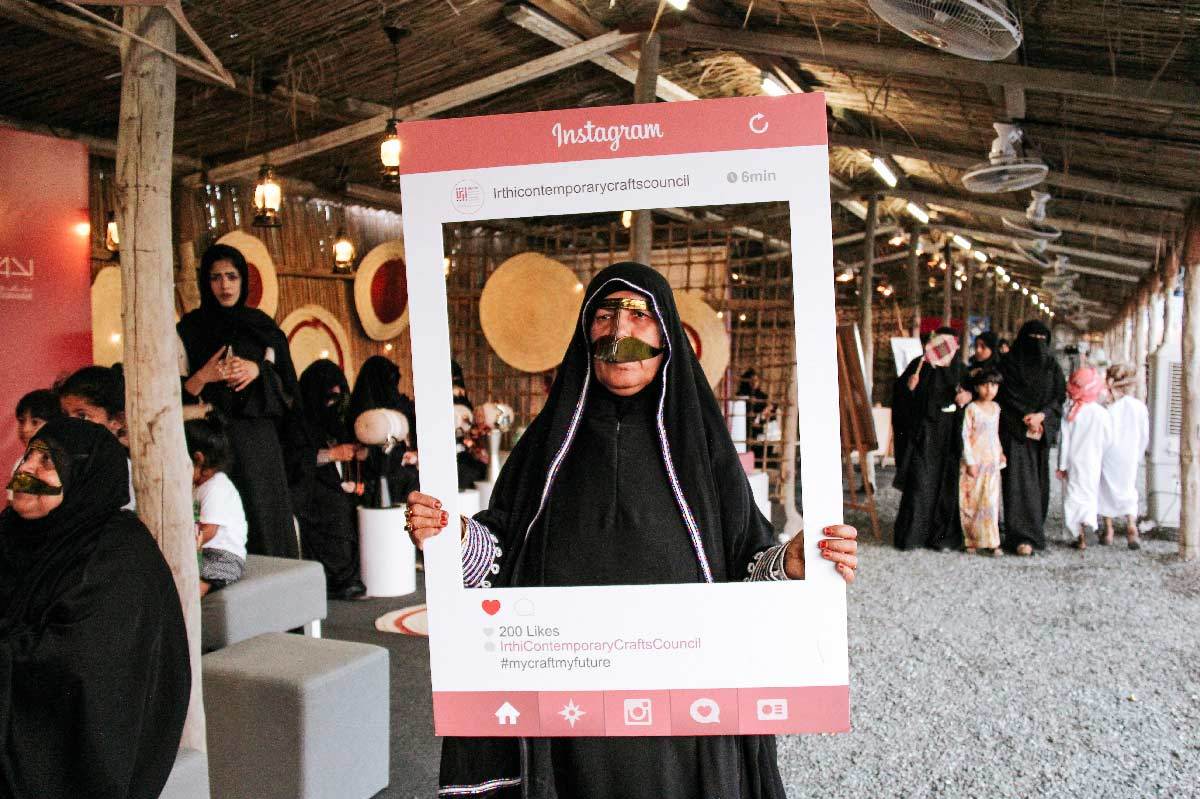 Talli weaver Umm Ahmed, known among her friends for having an open and entrepreneurial spirit

Everywhere we go there’s always a lead artisan – a groundbreaker, someone who has pushed the boundaries. For us, that’s Umm Ahmed,’ says Denton.

‘When she sees any design, she can do it. She mixes two types of talli in one, no one can think to do this. She’s a legend,’ adds Sharifa Hassan Mohammed, who is a senior executive at Bidwa.

Mohammed, a university graduate in her late twenties, says she never envisioned being involved in local crafts. Now, she’s proud to be part of an artisan collective fusing talli with new innovation. Even at home, she says, she cannot stop talking about the new community that she’s found.

Indeed, the scene in the weaving room resembles a large familial meeting. There is a constant and overlapping chatter, punctuated again and again by bouts of shared laughter. But the industrious sound of clicking spools, signifying talli in the making, does not pause, even for a moment. 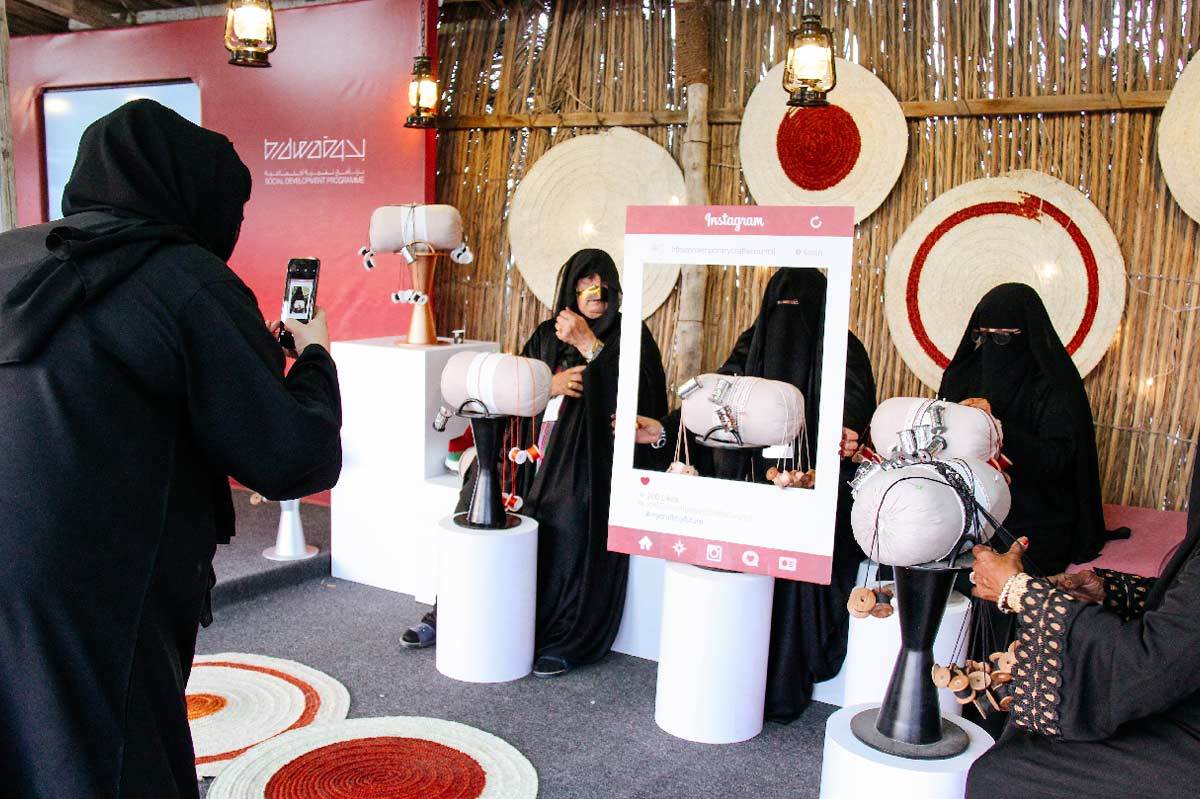 Craftswomen bridge generational gaps, showcasing their work through Instagram at a local fair