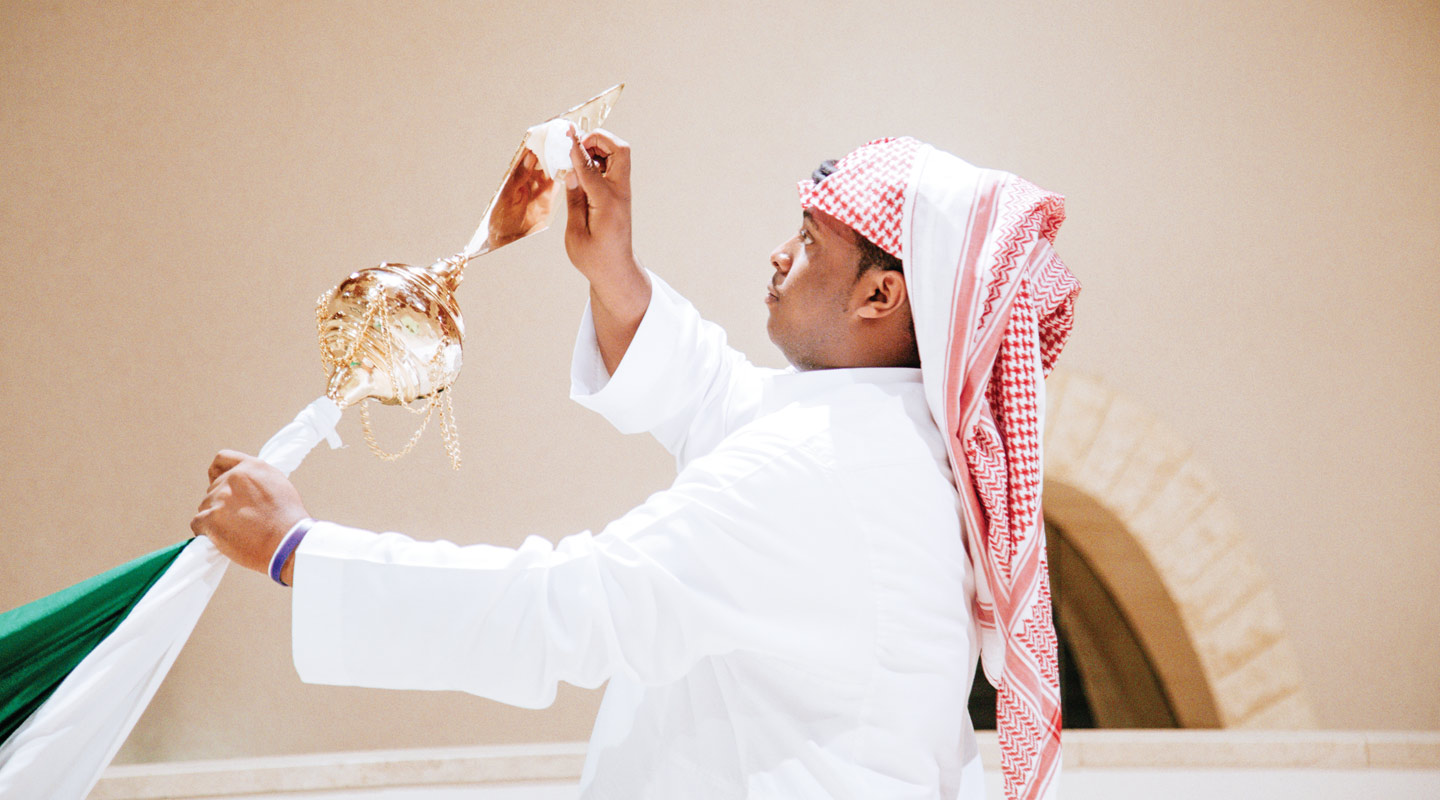 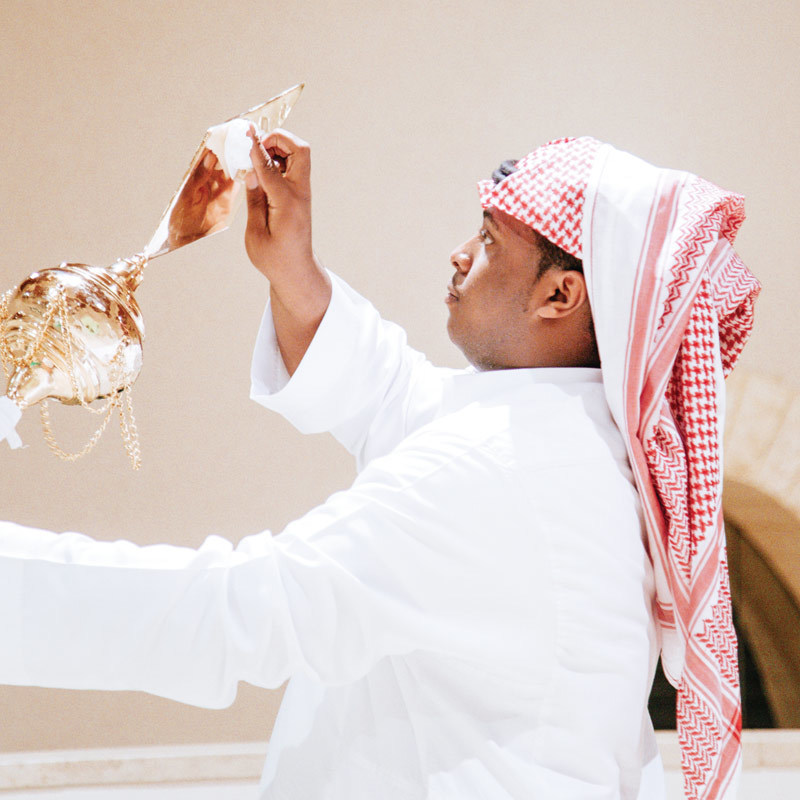 ‘If you are not interested in such matters as ardha, you are lacking in manly qualities,’ says Dr Saad Sowayan, a Saudi anthropologist and folklore scholar. ‘And in a tribal society, that is important.’

For the uninitiated, ardha is the national folk song and dance of Saudi Arabia. Performed strictly by men, it consists of a sword-brandishing two-step, in which performers dance shoulder to shoulder in two facing lines. Although its choreography – a slow bend at the knee while lifting and lowering swords to drumbeat and song – might sound simple, formal performances of ardha have been known to last several hours 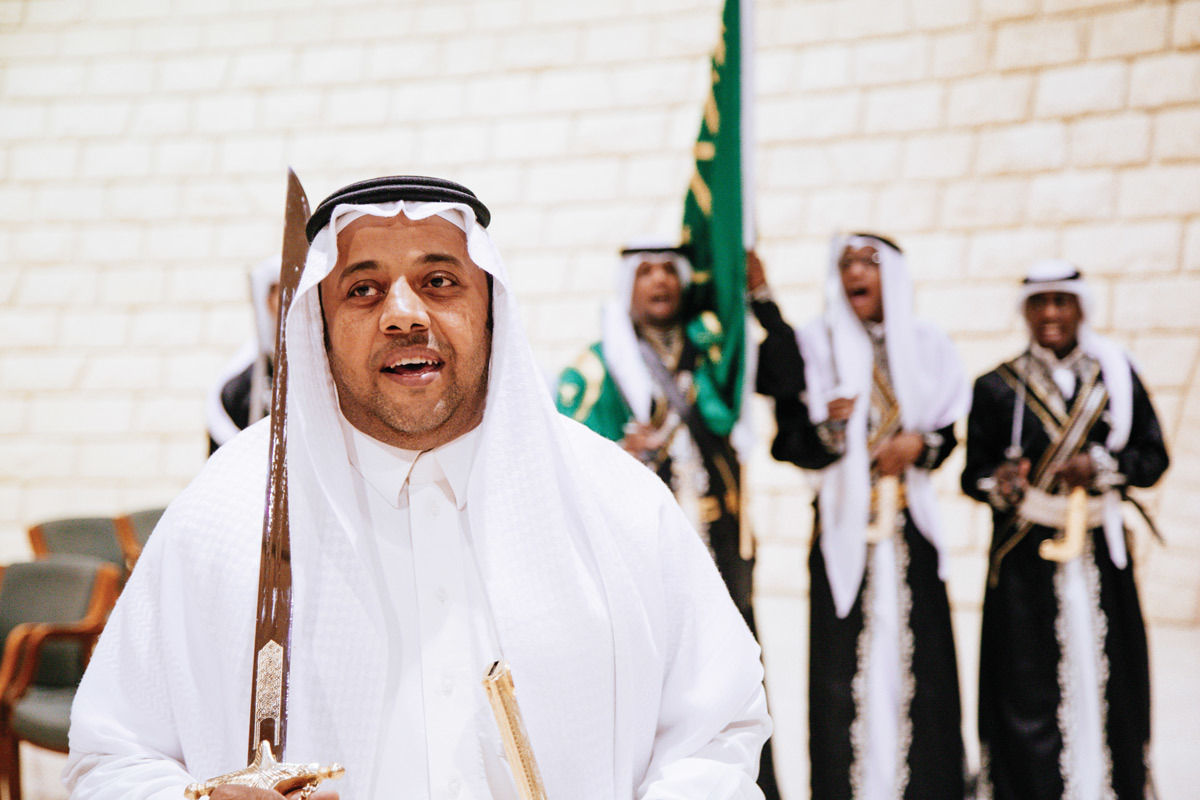 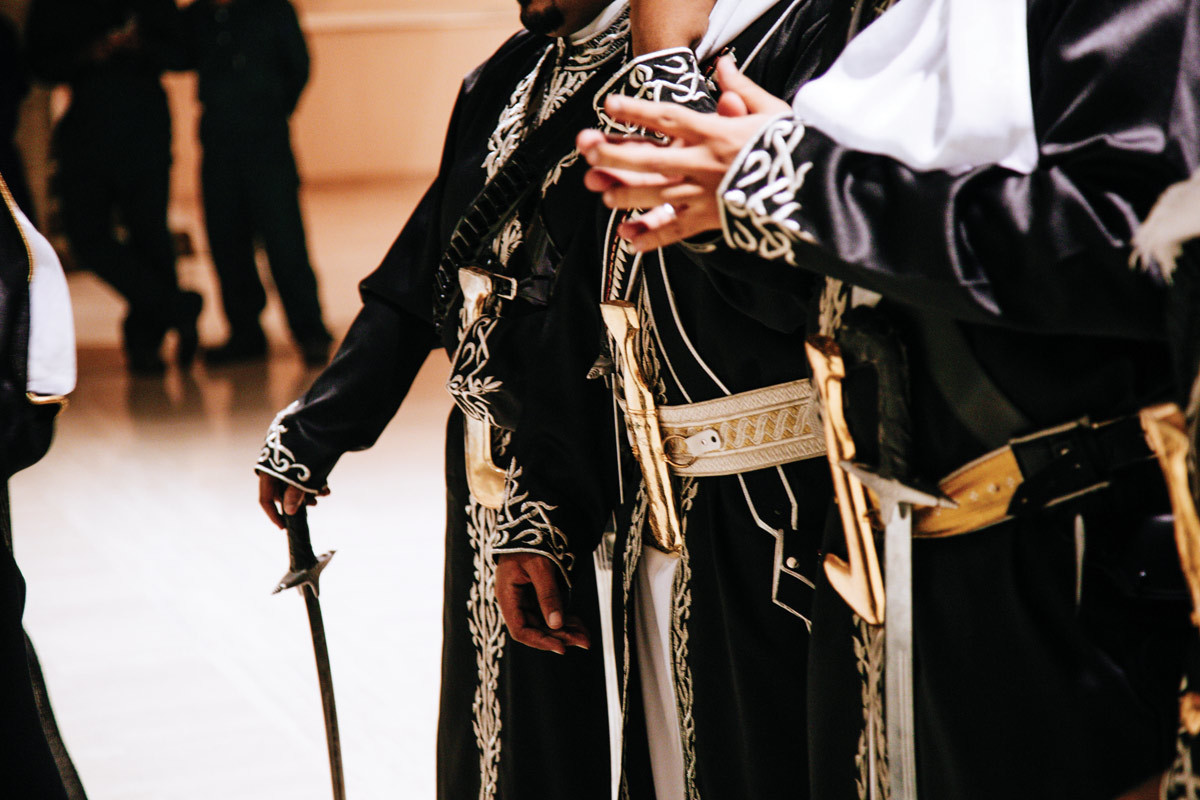 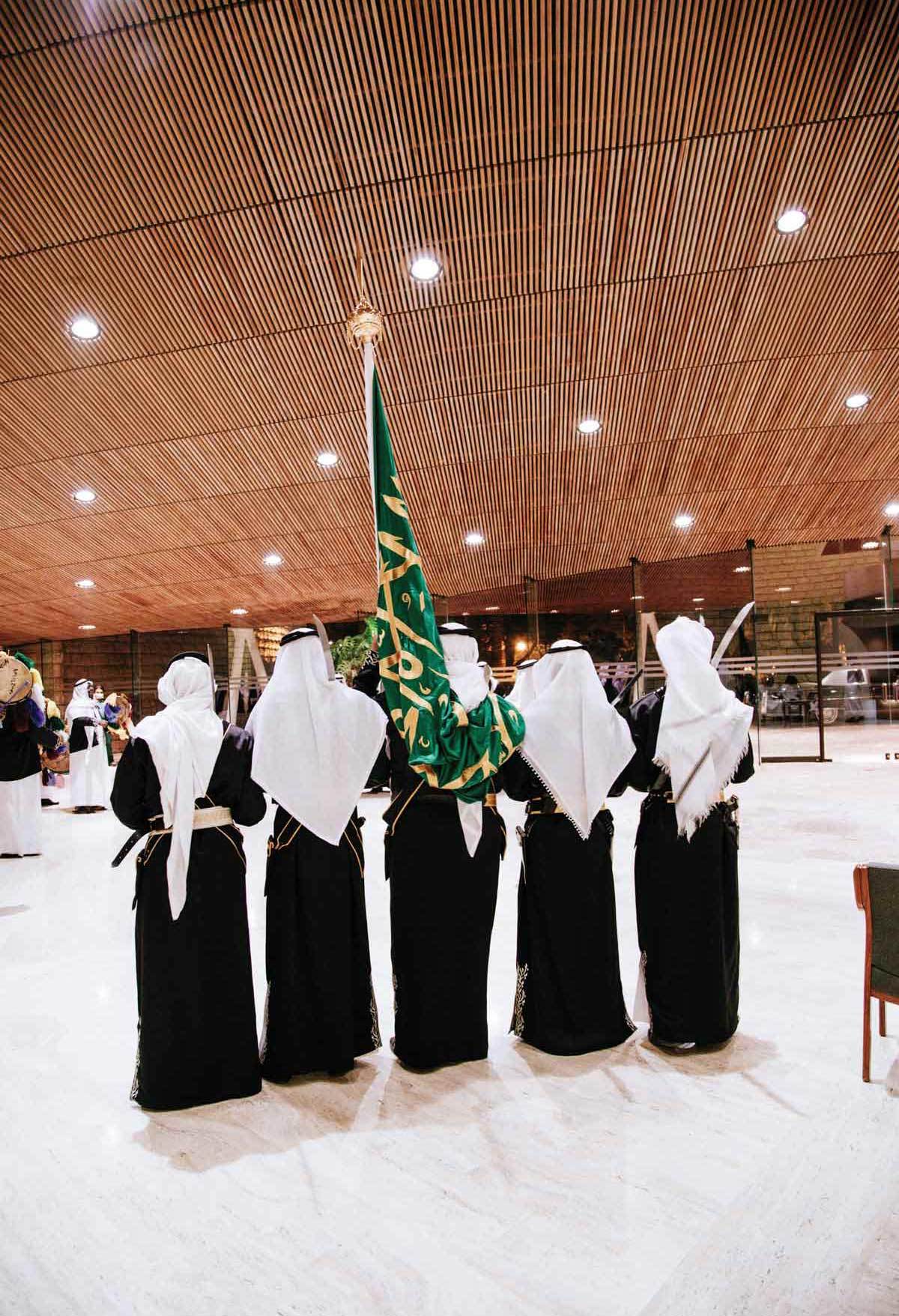 Native to the Najd region of Saudi Arabia, ardha is a slow and stately male folk dance performed by the raising and lowering of swords – often for hours on end

‘It was the length and the stamina of the performance that impressed me,’ says Dr Lisa Urkevich, a visiting scholar at Harvard University and author of ‘Music and Traditions of the Arabian Peninsula’. ‘I used to live in Saudi Arabia, and I first saw ardha on television. I remember watching for a little while, going somewhere and then coming back an hour later and the dance was still going on.’

Considered to be the most famous of Saudi Arabia’s al-funun al-sha‘abiyyah, or folk arts, ardha has become a symbol of the nation’s traditional culture. ‘It’s so nationalistic,’ Urkevich says of the song lyrics that accompany ardha and the contexts in which it’s usually performed. ‘You’ll see it at national events in Saudi Arabia all of the time. King Abdullah used to dance ardha with the national flag draped over his shoulders.’

Performed by royalty, leading dignitaries and citizens alike, ardha is Saudi Arabia’s most frequently seen dance. On National Day, for example, ardha is often performed outside of Saudi Arabia’s embassies around the world. Last year, too, ardha enjoyed more attention when international press ran photographs of the Prince of Wales shuffling self-consciously next to members of Saudi Arabia’s royal family during a performance at Riyadh’s Janadriyah Festival – one of the country’s most important annual cultural events.‘You can decline, of course, but it will reflect badly on you,’ says Dr Sowayan, explaining the protocol of accepting an invitation to dance. ‘It would mean that you’re not a man of metal – not a warrior man. Still, some people are good at it and some are not. You just have  to practise. Now, many groups practise regularly but in the past there were so many occasions for ardha that you just did so in  situ, so to speak.’ 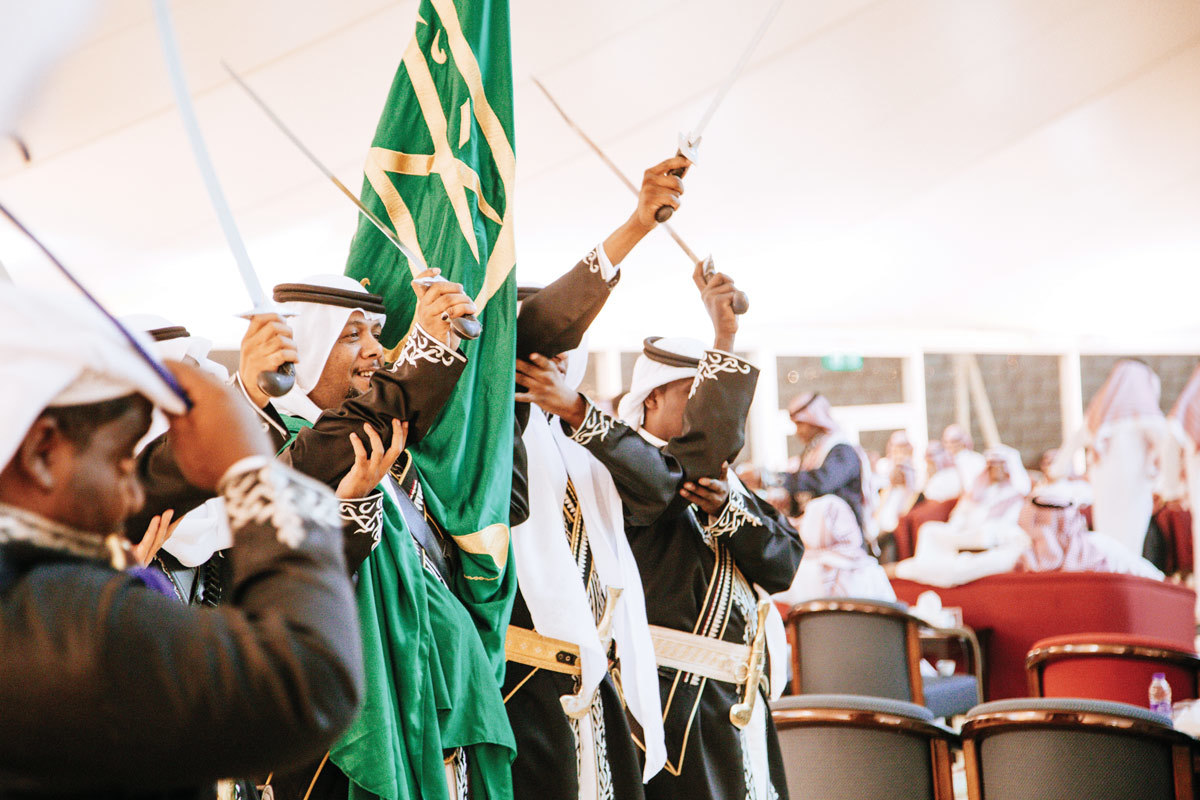 Performers will shake their swords quickly when raised, symbolically rattling their sabres in homage to the dance’s origins as a tribal war ritual

Historically, ardha was born from the tribal feuds of the Arabian Peninsula and the rituals performed in the Bedouin camps before battle. A progression from traditional war chants, ardha evolved to raise morale and prepare communities for combat. Although ardha originated in the central Najd region of Saudi Arabia, there are also variations to be found across the Gulf, from Qatar to Kuwait to the United Arab Emirates.
‘It echoes the past,’ Dr Sowayan says, in reference to the variation practised in Saudi Arabia today. ‘It was performed to instill enthusiasm in warriors and to encourage them to advance against the enemy.  It was an exhibition of adroitness – in dancing, in expertise of  handling weapons and also in the warriors’ physical fitness. Now, it  is only celebratory.’

The costumes worn by participants during ardha today, Dr Sowayan says, also hark back to the dance’s advent. ‘Certain distinguishing robes are worn during ardha today that are the same as those worn historically on the battlefield to identify famous warriors and horsemen,’ he says.
Today, most dancers will perform ardha wearing Saudi Arabia’s national dress – a red chequered keffiyeh and a pristinely white kandoura. Those who flank the national flag bearer might also wear an additional ceremonial bisht – a loose-flowing black cloak usually trimmed with gold at the lapels – over the kandoura. 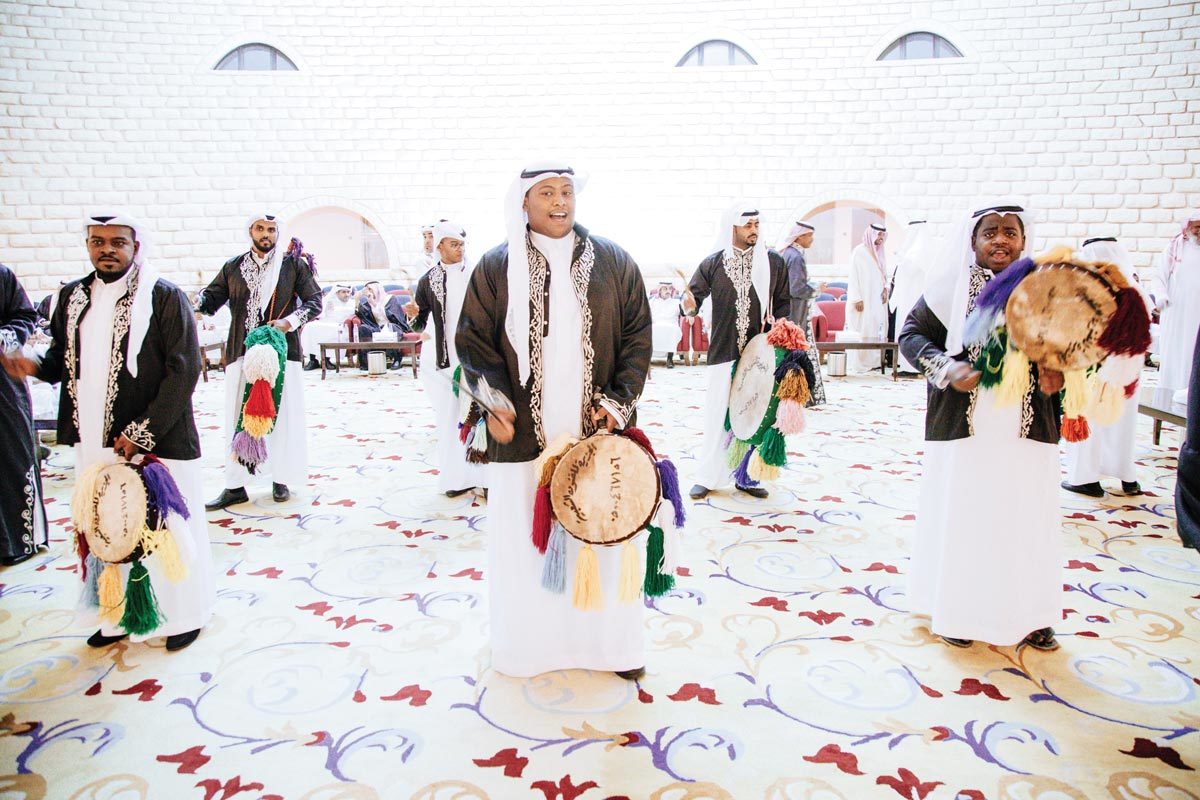 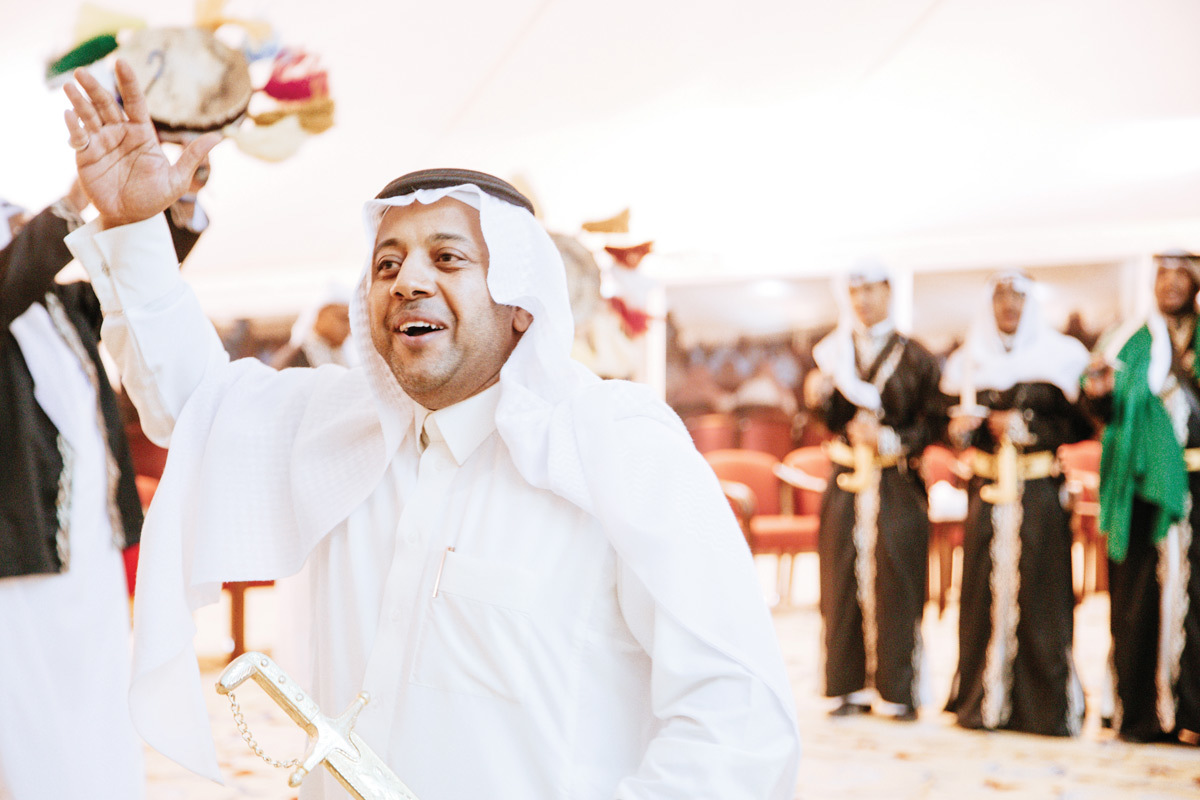 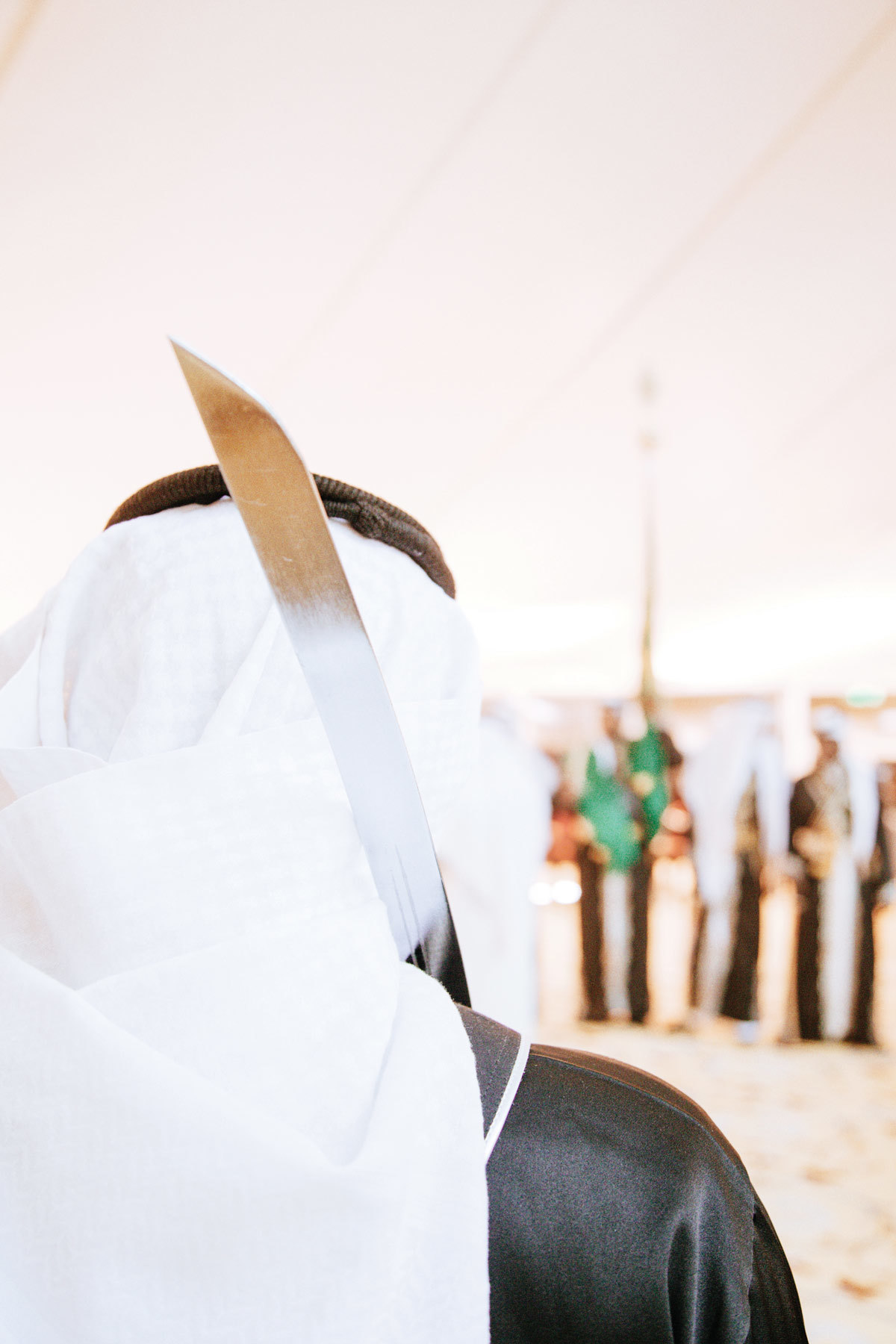 There are two types of drums that accompany the dance. The smaller of the two, known as tathlith, is adorned with colourful tassels that move as the drummer dances

Performers, too, often strap leather cross-belts over their chests, adorned with arsenals of weaponry, and leather belts around their waists that hold curved daggers known as khanjar. ‘Ardha derives from “ardh”, which means “show”,’ says Urkevich. ‘So what are you showing? Your prowess, your military strength, your number of weapons and the stamina of your men.’

The percussionists, who provide the dance’s stately, triple-metre drag beat (which Urkevich likens to ‘the asymmetrical rhythm of a walking camel’s gait’), usually wear ornately embroidered vests or ankle-length woolen jackets, known as daghla, that catch light as they move. ‘Certain patterns are embroidered on these vests with different things to represent different teams,’ Urkevich explains. ‘Some represent the palm tree, some represent oases, while some bands will have its own emblem embroidered,’ she says. 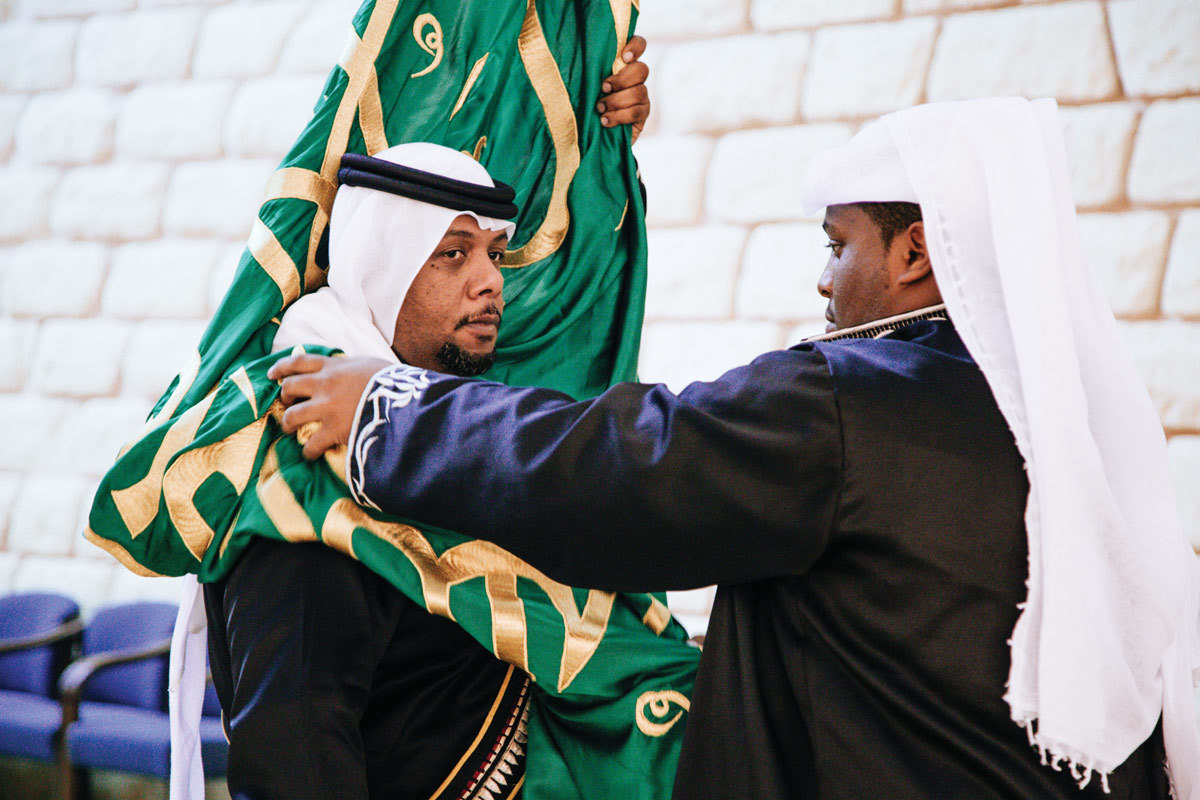 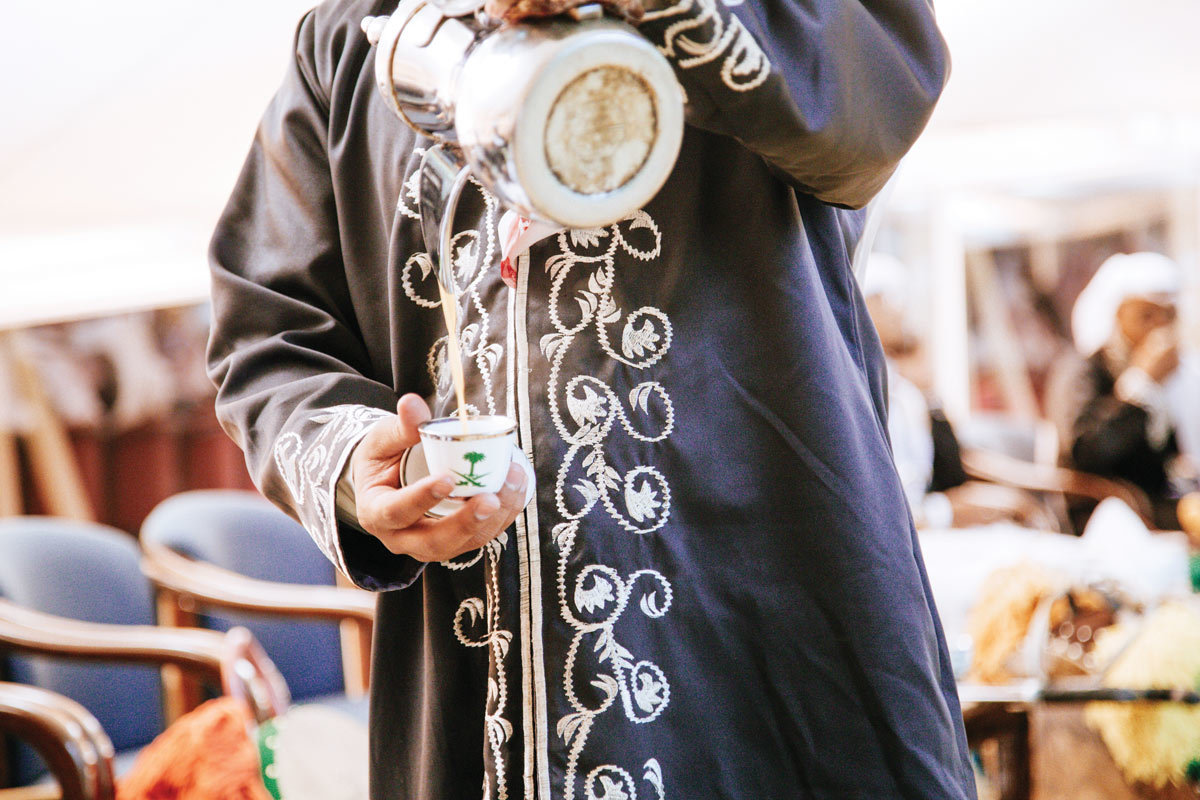 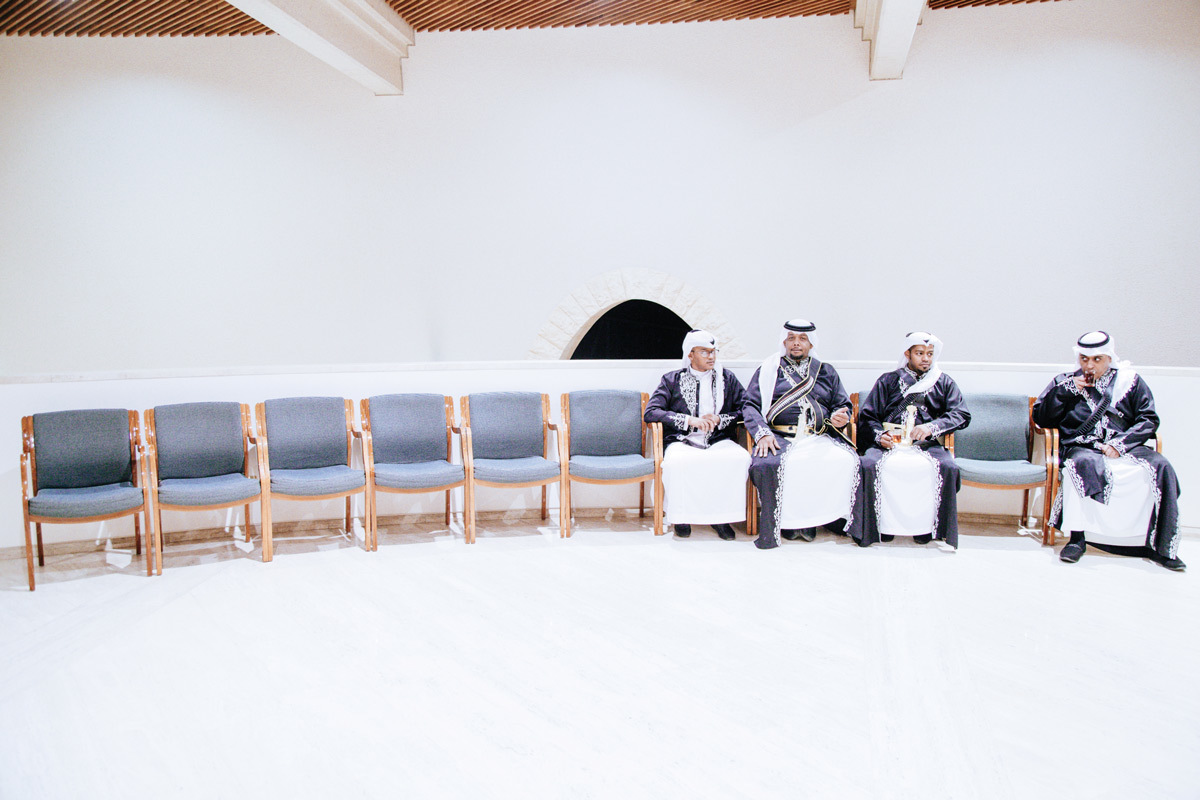 Even the various drums that the percussionists use, Urkevich explains, are ornately decorated. Green felt, the same colour as the  Saudi state flag is glued around the drum’s outer rim, as are pom-pom-like danadish.
Although Dr Sowayan says there isn’t ‘really any significance’ to the costume worn during ardha other than its historical and cultural connections, Dr Urkevich mentions that part of its lasting appeal  today is that performers want to, ‘You know, look good.’ 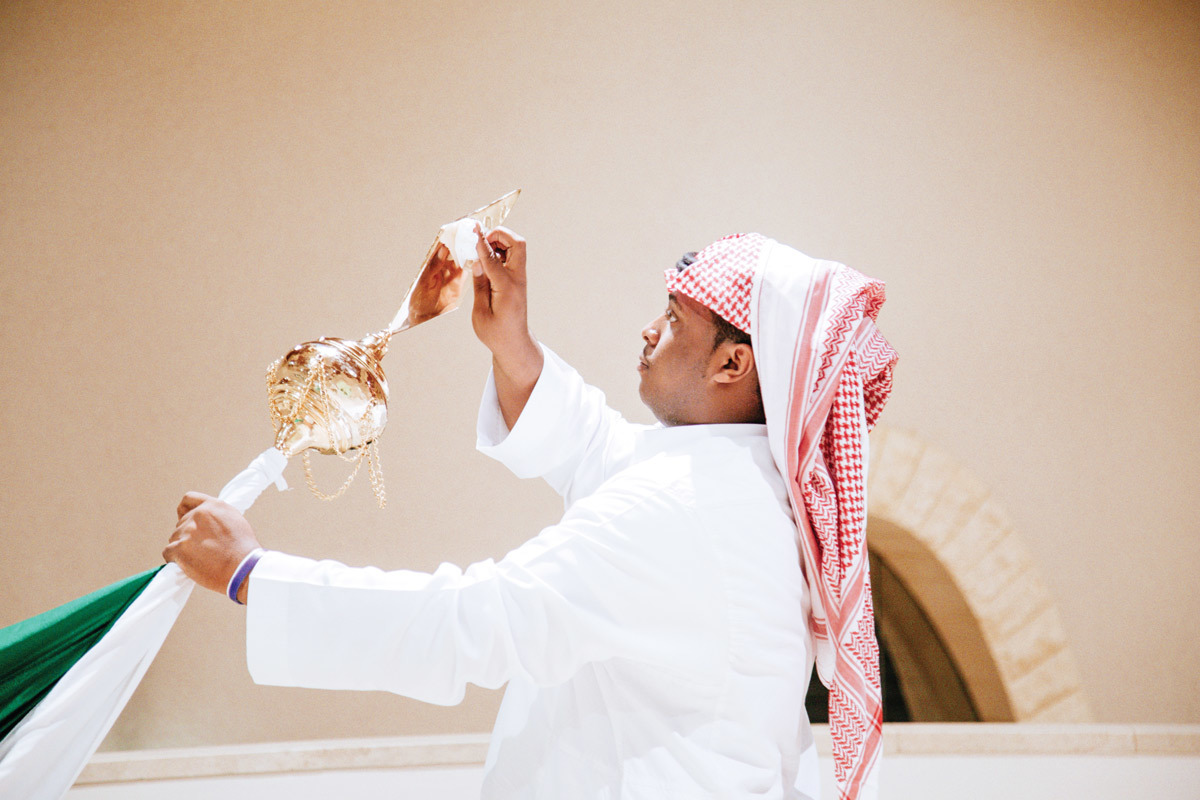 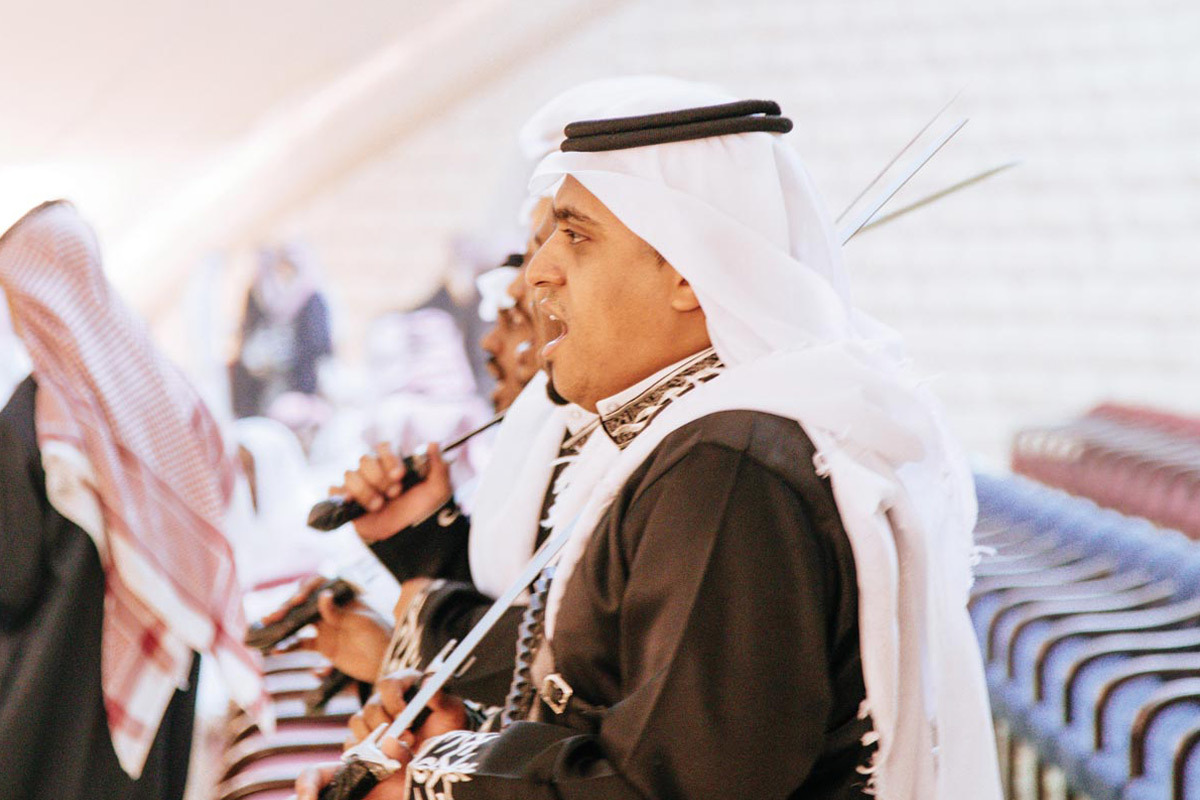 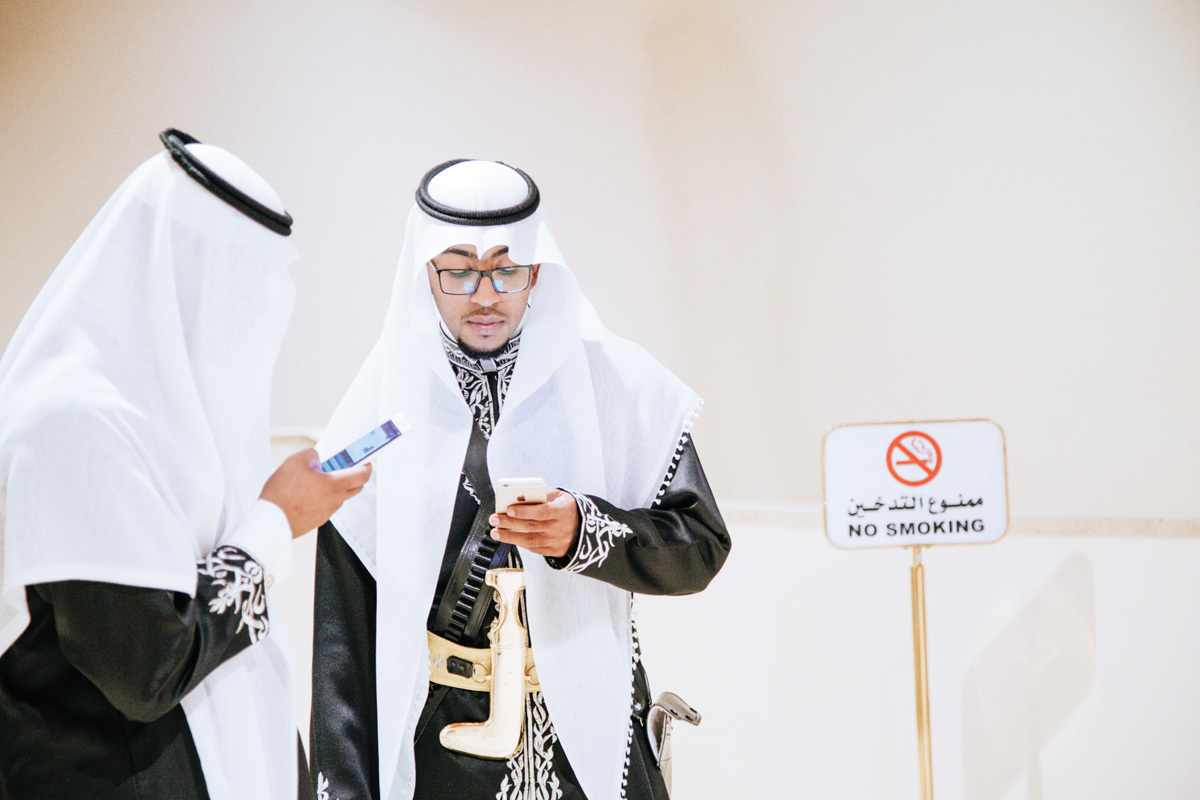 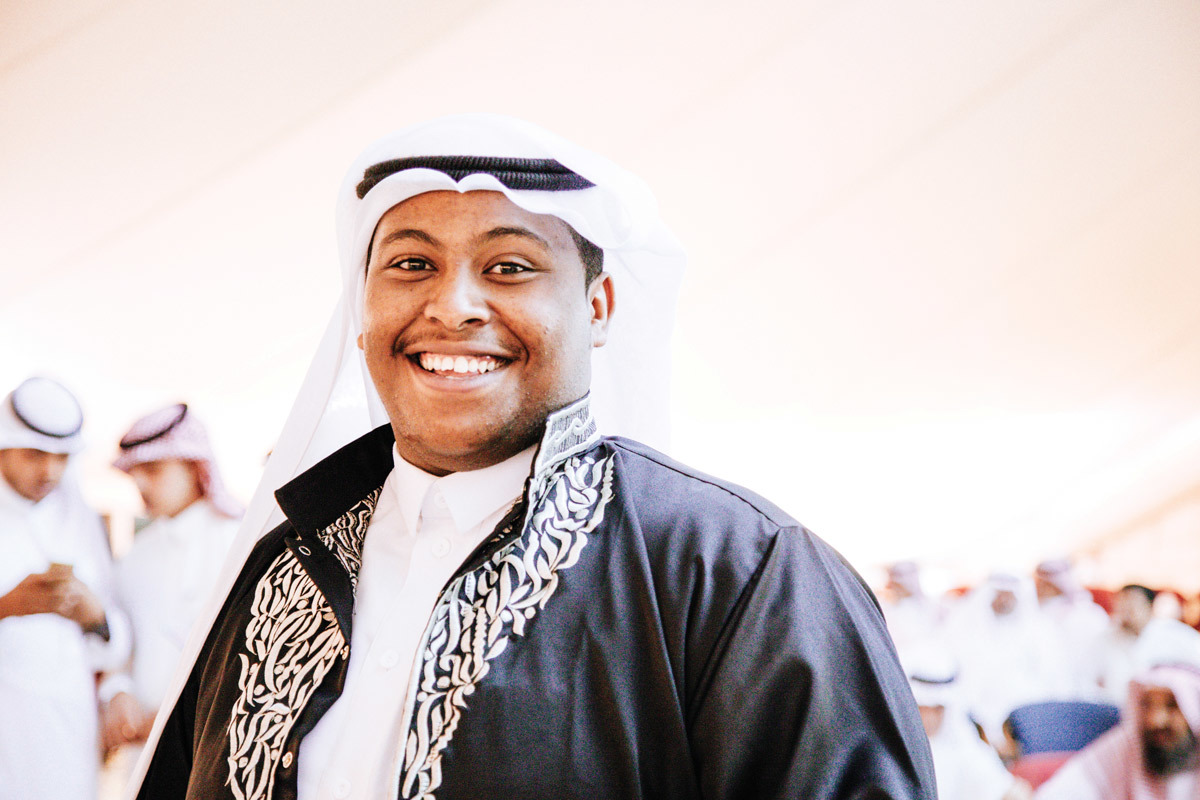 ‘You’re kind of showing off in front of the others,’ she explains. ‘Women used to watch how men danced ardha and would judge them on their athleticism and style.’ 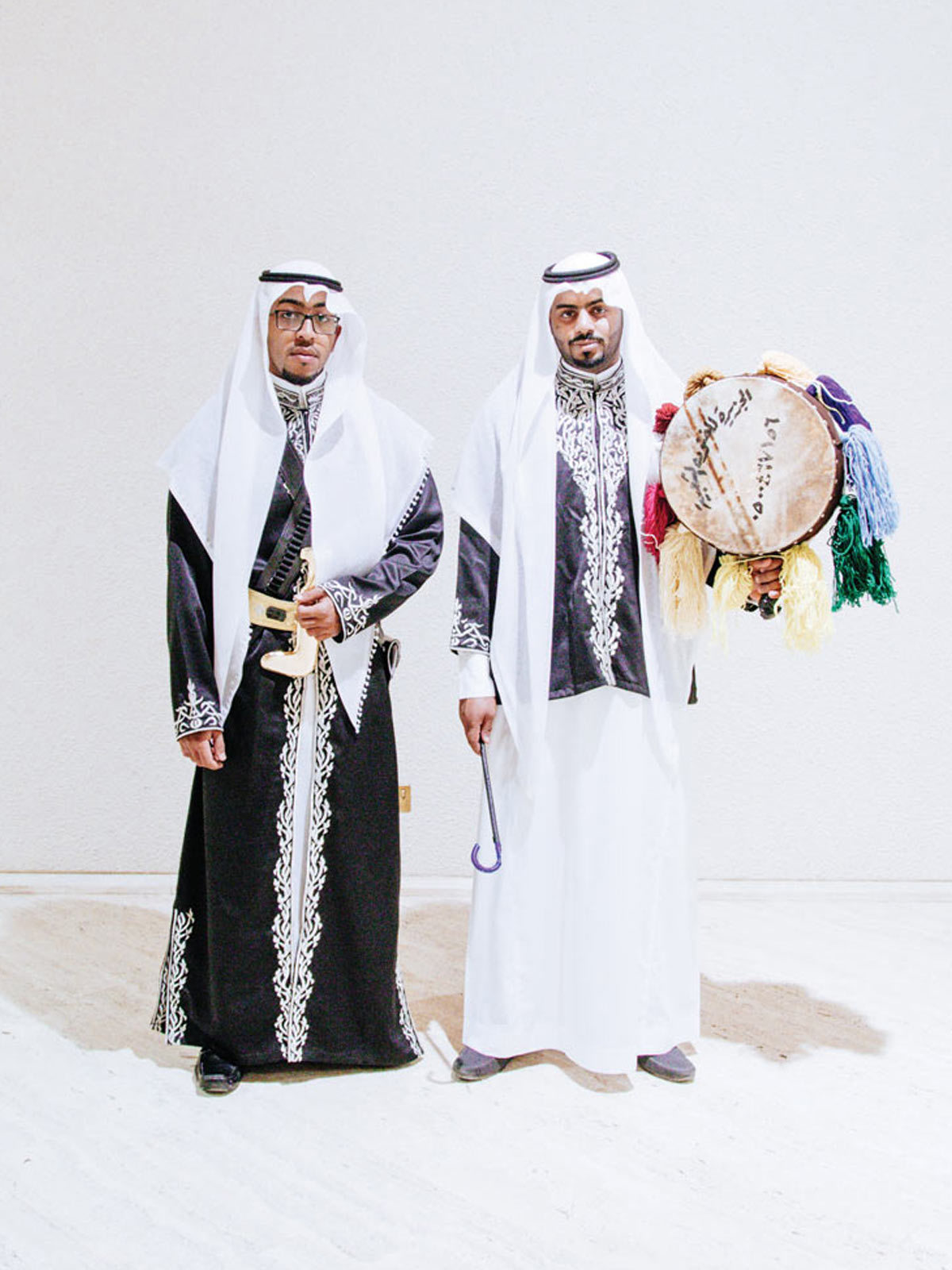 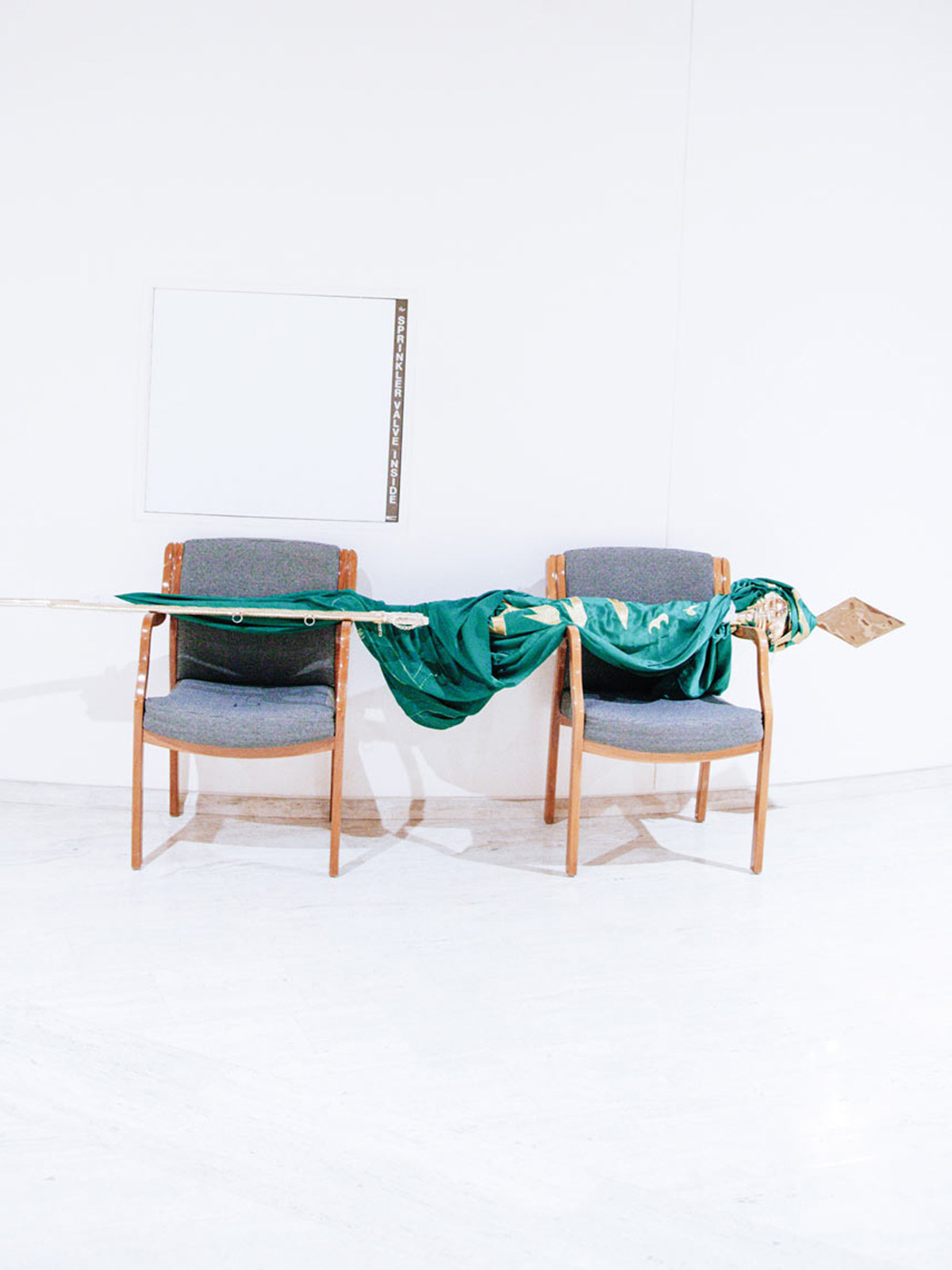 Left: The national dress of Saudi Arabia – a white kandoura and keffiyeh – is worn to perform ardha, often with an emroidered outer bisht or daghla

Right: Ardha is a patriotic dance, often performed by royalty and statesmen at events of national importance. The flag of Saudi Arabia is usually present

Although dancing ardha for hours on end certainly remains a test  of its participants’ stamina, today such displays of military prowess  are purely for show – the swords used, for example, are merely  props made of a lighter metal and the costume, Urkevich says, is never worn in private.

‘Today,’ she continues, ‘ardha represents all sorts of things, such as solidarity, camaraderie, national pride and unity. Young men will perform ardha at their graduation, so today it has more of this sense of, “We’re really proud, we’re really happy and we’re really united.”’ 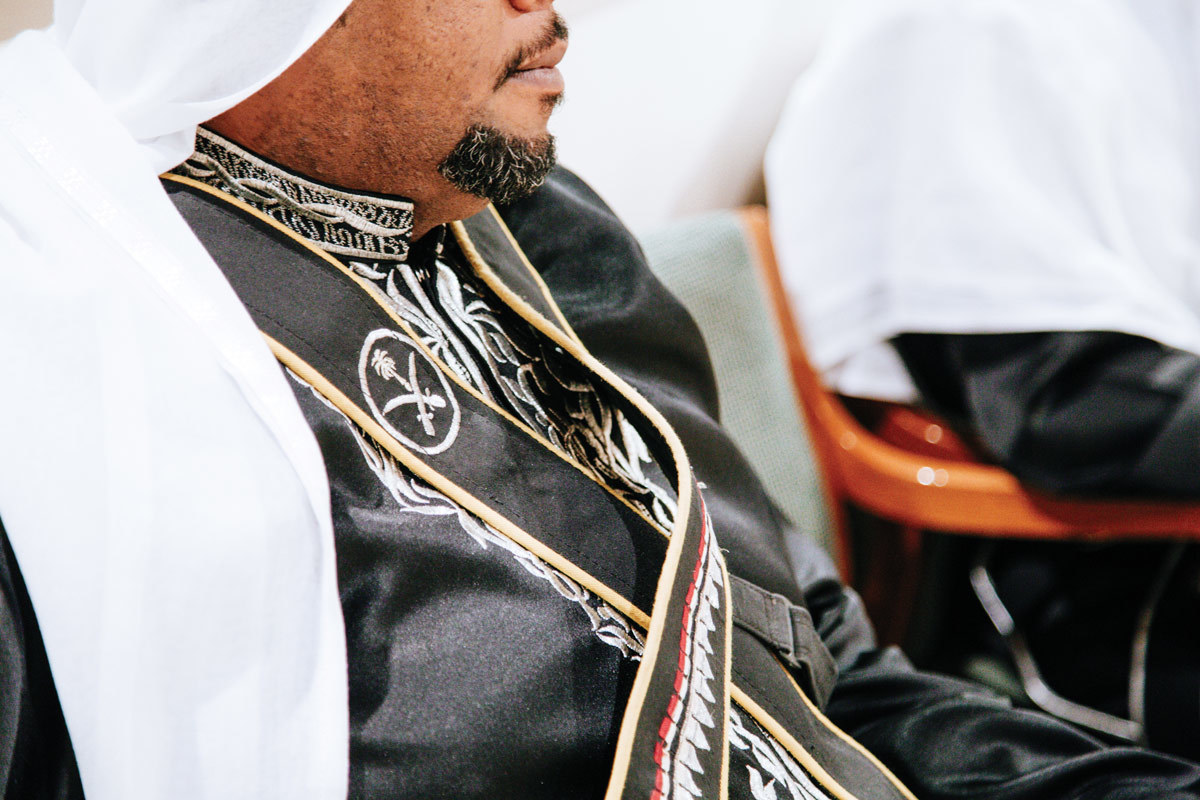 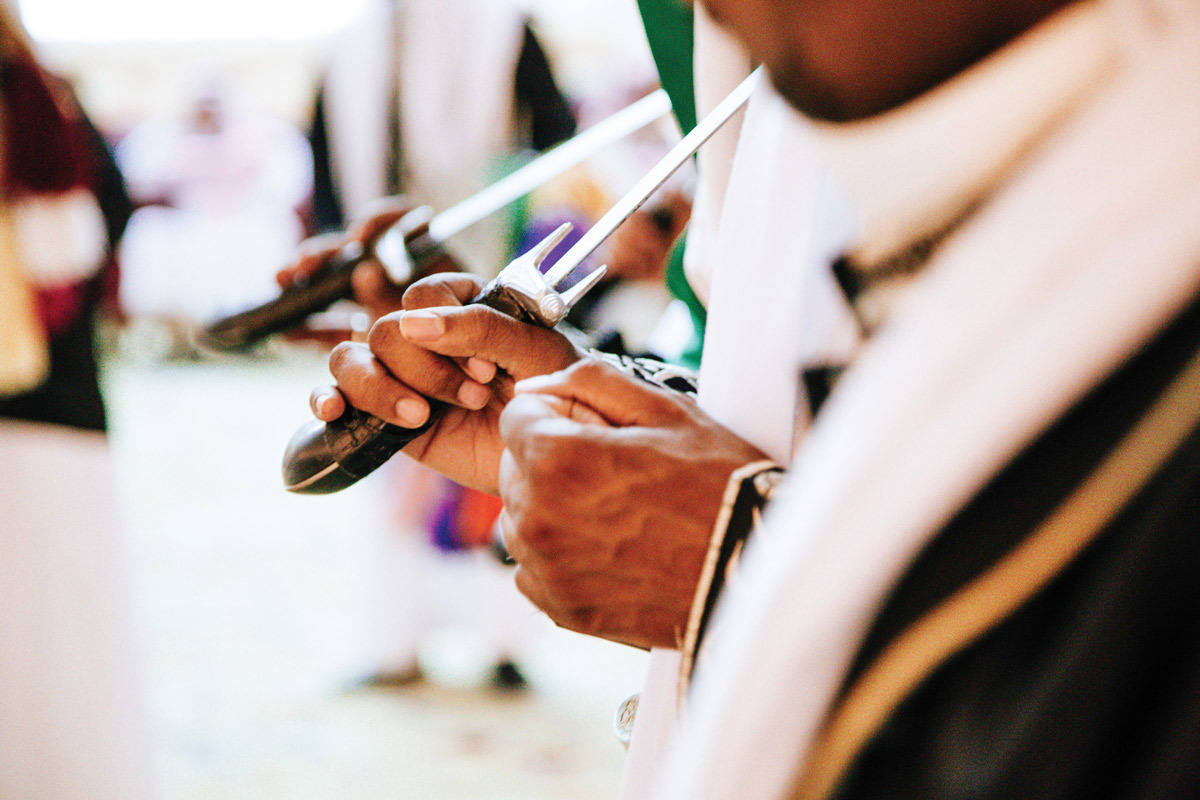 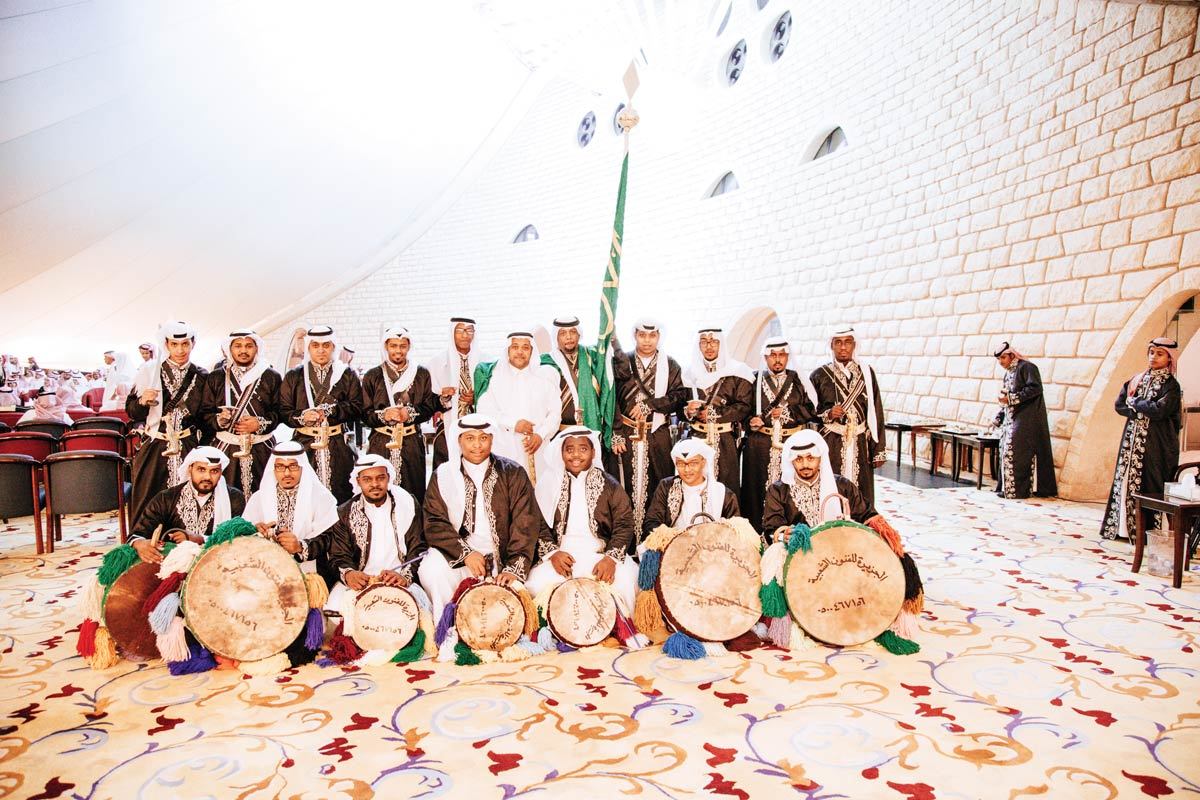